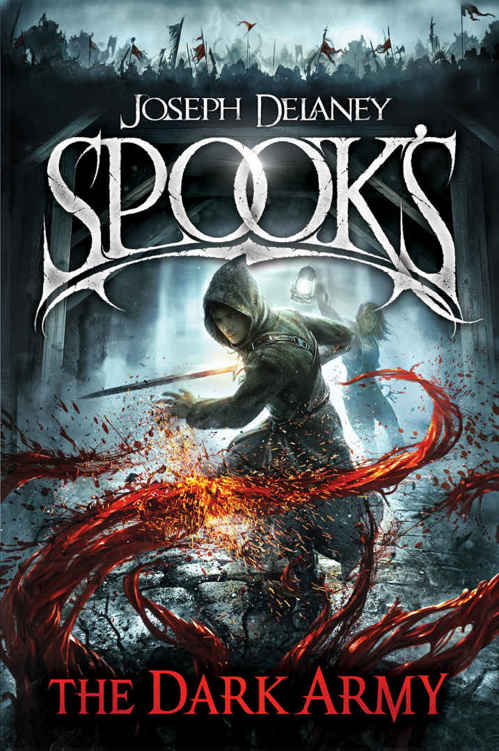 Chapter 4: A Council of War

Chapter 9: An Anvil of Pain

Chapter 14: Prisoner of the Kobalos

Chapter 20: The Space Between Worlds

Chapter 21: A Globule of Acid

Chapter 27: The Body in the Sack

Chapter 33: The Round Loaf

Glossary of the Kobalos World

Terrifying warriors of the dark have formed an army,
the like of which has never been seen before.
They will spill human blood – enough to make the
waters that divide our lands from theirs run red.

Thomas Ward, the County Spook, fought the dark with his own apprentice. He travelled far from home to lead an uprising against a legion of beasts intent on locking the whole earth in a never-ending winter.

But Tom now lies cold in his grave, and those who remain are in despair.

Who can now take up the battle – before the dark army brings the fight back to the County, and the world is changed for ever?

The clash with the forces of darkness continues in this terrifying new tale from the bestselling author of
The Spook’s Apprentice
.

We face a dark army, but its whole is greater than just the Kobalos military might, and far larger than the terrible battle-entities that they have created.

It includes the gods who support them – deities such as Golgoth, the Lord of Winter, who will blast the green from the Earth and create a road of ice along which their warriors may glide to victory.

ABOUT AN HOUR
after dark, Jenny began to climb the spiral steps that led to the tallest of the high eastern turrets. She was slightly breathless, but it was not just because of the exertion of the steep climb.

She was nervous. Her palms were sweating and she could feel a weakness in her knees. The attic she was heading for was haunted.

She was only an apprentice and it would be many years before she’d become a spook. Was she taking on too much? she wondered.

It was cold, and her breath was steaming from her nostrils. Step after step she forced herself upwards.

Jenny was carrying a lantern; one pocket was filled with salt and the other with iron; additionally she had tied the silver chain around her waist and was also gripping a rowan staff. She was ready for any threat from the dark.

The way to deal with ghosts was to talk to them – to try and persuade them to go to the light – but Jenny wasn’t taking any chances. In this cold northern land, so far from the County, who knew what she might encounter? Ghosts might be very different here. She felt better with her pockets full and a weapon in her hand.

She reached the stout wooden attic door and tried one of the eight big keys on the heavy bunch. She was lucky: although the lock was stiff, the second key turned.

The door creaked open on rusty hinges, the bottom juddering towards her over the flags as she dragged it open. It had swollen with the damp and probably hadn’t been opened for many years.

Jenny took a deep breath to steady her nerves and stepped into the room. She was a seventh daughter of a seventh daughter with the gift of sensitivity to the dark; instantly she sensed that something threatening was nearby. She raised the lantern high and examined her surroundings: a small room, the wooden panelling stained with patches of fungus, and the table and two chairs were covered in a thick layer of dust. Another door was directly ahead of her, no doubt leading to the main chamber.

She shivered. It was cold enough to make her glad of her sheepskin jacket. But the worst thing was the smell. This was just about one of the stinkiest places she’d ever been in. Back in the County, she’d once walked out onto the Morecambe Bay sands to see what a crowd of people were staring at. There’d been a shoal of huge fish washed up on the beach. They’d been dead for some time and they stank. What she smelled now was similar, but there was some kind of living animal smell mixed in. It was a bit like walking into a stable of sweating horses and sodden sawdust. Then there was a third element to the mix – a hint of burning flesh and a taste of sulphur on her tongue.

By the yellow light of the lantern she saw a big spider high on the wall above the inner door. As she approached, the creature scuttled off towards a huge web in the corner.

There was no lock – just a metal handle. She turned it and tried to open the door by pushing it away from her. There was resistance so she reversed direction, pulling it smoothly outwards.

Her sense of a threat from the dark was growing.

The lantern illuminated what had once been someone’s opulent living quarters, now ruined by damp and neglect. Three huge fireplaces gaped like monstrous mouths, their rusty metal grates filled with ashes. Water dripped from the ceiling onto a rusty chandelier. There were the remnants of fine carpets on the floor; now they were damp, dirty and mildewed.

Then something unexpected caught her attention: four couches at the centre of the room formed a square, facing inwards towards something very unusual – a dark circular hole about ten feet in diameter. It was ringed with stones – someone had left a wine glass precariously balanced there. It looked as if the slightest disturbance would send it plummeting down into the darkness. The stones themselves glistened with water.

Jenny approached the ring of stones and gazed down into the dark hole, holding the lantern over it. It looked like a well. Was there water at the bottom?

Then Jenny realized that there was something impossible about what she was seeing: how
could
it be a well?

She was standing in an attic right at the top of a turret. There were rooms below. Directly beneath them in the palace was a kitchen and then, on the lowest level, the second largest throne room where Prince Stanislaw, the ruler of this land, received petitions, held meetings and dispensed justice.

She had been given a tour of this part of the castle a day or so earlier. If this dark shaft ran through the turret rooms and then down into the ground, then there would have had to be some sort of circular stone structure, like a chimney, in each of the large rooms near the ground. Surely she would have noticed such a thing?

Except for the sound of her muffled footsteps across the damp carpet and the water dripping onto the chandelier, the room was quiet. But Jenny could hear something new: a trickling, as if water was being poured into some small vessel.

She stared at the wine glass. It was slowly filling with red wine. A thin stream was falling into the glass but there was no visible source for the liquid. Was it being poured by an invisible hand?

A second later an unmistakable metallic odour told her that she was wrong about the liquid. It wasn’t wine. It was blood.

Jenny watched in fearful fascination as the glass slowly filled. The blood reached the brim and then spilled over onto the stone. The droplets began to steam, and the sudden sharp stench made her heave. As she watched, the blood in the glass began to bubble.

Then the vessel wobbled and fell into the dark shaft.

Jenny counted to ten but there was no splash, no sound at all. The shaft appeared to be bottomless.

The room had been dank and cold, but now it seemed to be growing warmer. Steam began to rise from the circle of wet stones.

Her sense of danger increased. She could feel the hairs on the back of her neck stand up and her fingertips were tingling. These reactions told her that this attic contained something far worse than a poor soul needing to be coaxed towards the light. She had hoped to demonstrate her bravery and prove her competence to become a spook. She had to learn to cope alone.

Clouds In My Coffee by Andrea Smith
Jimmy's Blues and Other Poems by James Baldwin
Gama and Hest: An Ahsenthe Cycle companion novella (The Ahsenthe Cycle) by Razevich, Alexes
The Life by Martina Cole
18 Deader Homes and Gardens by Joan Hess
Blood Secret by Jaye Ford
The Story of Me by Lesley Jones
Troy Rising 2 - Citadel by Ringo, John
A Fool's Alphabet by Sebastian Faulks
The Honorable Heir by Laurie Alice Eakes