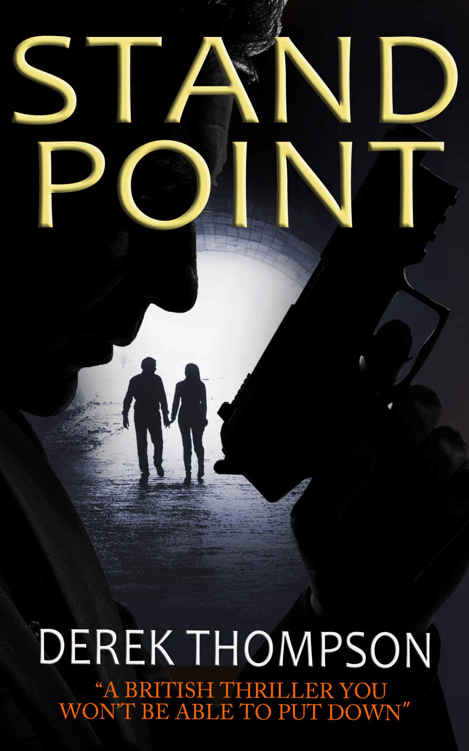 This book is a work of fiction. Names, characters, businesses, organizations, places and events are either the product of the author’s imagination or are used fictitiously. Any resemblance to actual persons, living or dead, events or locales is entirely coincidental. The spelling used is British English except where fidelity to the author’s rendering of accent or dialect supersedes this.

Derek Thompson asserts his moral right to be identified as the author of this work.

There is a glossary of British slang in the back of this book.

You may also enjoy the sequel to Standpoint:

A young woman lies dead at an army base. Was it really an accident?

Thomas Bladen works in surveillance for a shadowy unit of the British government. When Amy Johanson is killed during a weapons test, Thomas and his partner Karl are determined to get to the bottom of it. They must protect Amy's friend Jess, the only witness they have, who plays a dangerous game of seduction and lies. Meanwhile, Thomas’s girlfriend Miranda and her family are once again put in the firing line.

Can Thomas get justice for Amy, solve the mystery of Karl’s past, and decide who he can really trust?

Thomas Bladen focused his binoculars on a block of shipping containers far below the lookout. As a prolonged ferry blast carried across the port like a cry of mourning, he surveyed the slate sky, tracking a gull as it veered across and crapped on a Bentley. He smiled for the first time that day: welcome to Harwich. If he hadn’t been so far away — and on surveillance — he’d have thrown the bird some bread for a second run.

The laptop bleeped — another image stored. He bent towards it amid the stench of damp and decay of the near-derelict room. His colleague, Karl McNeill, lightly tapped a window and made a customary grunt of approval. Thomas ignored him.

“Hey Tommo, check out the red-head; eleven o’clock — by the blue sports. I'd do some deep cover work there, right enough. I’d even forego the overtime!”

Thomas glanced over and grimaced.
Prat.
After putting the binoculars down carefully, he attended to his camera, readjusting it six inches to the right. Then he squeezed the button and watched as another square of panoramic mosaic gradually uploaded to the screen.

“I don’t know why you bother with that old bollocks, Tommo. Overkill if you ask me, and the job’s not even on yet.”

“I like to be thorough,” he held a finger up to keep Karl at bay.
And I don’t like to be disturbed.

“Hardly worth it though, for a Customs’ promo, unless you’re after impressing the boss?”

Thomas paused and moved the camera again.
Here it comes
.

“But then, weren’t you and Christine co-workers
and
playmates before she became boss?”

“That was a long time ago.” He stared at the sequence of images before homing in on the sports car. “She’s married,” he announced with satisfaction.

“No, your dream date in the blue sports. I see a wedding ring.”

“I wasn’t looking at her fingers.”

The room fell silent again; Thomas preferred it that way.
Magnify the row, scroll right and . . .
Something snagged his attention; he stopped on square 34, captivated by a lone figure leaning out of a four-by-four, with high-powered lenses.

“Karl, how many spotter teams are on today?”

“Jeez, pay attention. Customs are on the ground, Crossley’s lot are on the far side and then there’s us two, in the penthouse.”

“’Course, yeah.” He tried to ignore square 34 and fell back into the rhythm of the job, while Karl rustled a newspaper and muttered something about tits.

“Tommo, didya ever think, when you signed up with the SSU, that you'd one day rise to the third storey of a genuine shit-hole?”

He smiled without turning round. “Well, I had my hopes . . .” Adjusting the magnification, he took a clear shot of the four-by-four’s number plate. As he worked, his fingers tingled, or else he imagined they did. Whoever the stranger was, he didn't appear on the duty roster, and Thomas was a man who didn’t like surprises. He photographed what he could, collecting details — an expensive shirt, an ornate wedding band and a designer watch. One thing was clear — this gate crasher wasn’t short of a few quid.

Suddenly professional, Karl called in their readiness. Thomas had seen that metamorphosis many times now and it still fascinated him.

“Thing is,” Karl mumbled, leaning towards his eyepiece, “if they gave us rifles instead of cameras, we could sort out the bloody smugglers ourselves.”

“Thank you Rambo; maybe that’s the reason they don’t arm us?”

At the next ferry horn, Thomas checked the time and turned to catch Karl's big performance, watching as he scrunched his face up, cartoon style.

The ferry slowly manoeuvred into port and they watched from their vantage point, primed like racing dogs in their traps. Thomas tried to concentrate, but that tingling feeling kept pulling him back to the lone spotter — still there and focused in the same direction.

The slow tally of vehicles and pedestrians snaked out into a warm Essex afternoon; a dark blue Customs van inched forward to greet the traffic. After three cars passed, the van doors slid back and four uniformed officers fanned out. The lone spotter tensed up; Thomas could see his binoculars twitch to attention.

A white Transit was diverted to one side. The driver brandished paperwork, but it made no difference. A Customs Officer took his keys and unlocked the back doors.

“Got ya, you bastard!” Karl hissed triumphantly.

The Customs team removed several boxes and the Transit’s suspension lifted. Thomas focused in on the driver. He'd be making his excuses now, trying to bullshit his way through by talking about a party or a restaurant or stocking up for Christmas — in June. But he looked more nervous than he ought to be.

“Nicked!” Karl growled with relish, and popped open a celebratory can.

Thomas laughed. Typical Karl: enthusiasm of a Labrador and the loyalty of a Premier League footballer on the make. Last assignment, he’d been Benefits Fraud team, through and through. Now it was HM Customs, providing fly-on-the-wall footage for in-house use. Karl seemed to love it all, but as far as Thomas was concerned, the Surveillance Support Unit was just a cheap labour source for any government department in need.

Other vehicles slowed, as if to enjoy the spectacle. One, a red Astra estate, held back the queue for a few seconds, prompting a chorus of car horns. Thomas rattled off a couple of shots then switched over to binoculars, picking up his walkie-talkie.

“Control, from Team 3; the red Astra exiting — worth investigating? Over.”

Thomas wasn't convinced, but he knew when to hold his tongue and kept the Astra in sight. As it jolted forward, a rear window lowered a few centimetres. It drew level with the Transit, and a short piece of pipe poked out. On instinct, Thomas panned left, framing the Transit driver’s face; the man looked like he’d seen a ghost. It was over in seconds. Even after the driver slumped to the ground and the red car had dissolved into the traffic, no one else seemed to react. But it had burned into Thomas’s brain, in slow-mo. He tasted the fear and helplessness, and swallowed it down.

Something clicked at the back of Thomas’s mind. Square 34! He shifted the camera along; there was only one empty car space — the four-by-four was gone, but the ferry was still unloading. He darted from square to square, tracking along the car lanes until he found it. He clicked frantically, no time to focus, hoping he’d get something useful.

Karl jammed an earpiece to his face and embarked on a running commentary. “Jesus, they think the poor bastard’s been shot. He’s still breathing; not much blood loss — can’t have been much of a weapon.”

Thomas shuddered. Karl made it all sound matter of fact but then, he reasoned, for someone with Karl’s military background, it probably was. “So,” Thomas felt the sweat trickle down the sides of his face, “when do you start your new job as a Samaritan?”

Soon, the view was choked with blue lights and sirens, as an ambulance and the police put in an appearance. Thomas watched through the window, without magnification; he no longer felt like taking a ringside seat.

“What about that, Tommo?” Karl spluttered gleefully. “I can’t work out where there's a clear line of sight — unless it was at close quarters — like maybe a zip-gun? Hey, it could have been your family from the red estate! Crossley’s going to look pretty stupid at debrief. What a shot though, if it was, I mean — moving vehicle and all; even
I
couldn’t have done that, in my day.”

“Still,” Karl pondered aloud, “it’s not much of a hit if he’s still alive.”

Unless that was the intention?
Thomas recalled the haunted look on the driver’s face. “Well, anyway, it’s not our problem,” Karl picked up the walkie-talkie and called for authority to stand down. “Right Tommo, are you coming for a late lunch before we head back? This will be the worst promotional content ever made. What’s the betting it all gets mysteriously lost in the editing process?”

And even as Karl said it, Thomas decided that some of his own footage, especially the four-by-four, wouldn’t make it into the report. Rule number one: Don’t get involved. Rule number two: If you have to get involved, get involved alone.

“Nah, you go ahead. I’ll be here a little longer.”

“Suit yourself. I’ll see you back at base.”

Or, as they both knew better, The Railway Tavern in Liverpool Street.

Thomas sat perfectly still for a couple of minutes and breathed in the silence. Out the window, he could see things returning to normal down there.

He took new shots of the area around square 34 and lined up the rows above and below. Half an hour later, Photoshop had smoothed out any inconsistencies. It was like Spot the Difference for idiots, with the four-by-four missing. And only the new version would be available for public viewing. As soon as he’d finished, he pulled out his mobile and hit the redial button.

He savoured her voice like a warm cognac. “I'm after something,” he said, opening a file on his laptop.

She gave a filthy laugh and he drew the phone in closer.

“Done; and listen, make sure this is kept anonymous.” He read the letters out phonetically, emphasising each number, the remnants of his Yorkshire tones lost in cool precision.

“Don’t thank me till you see where we’re eating. And dress up for a change!”