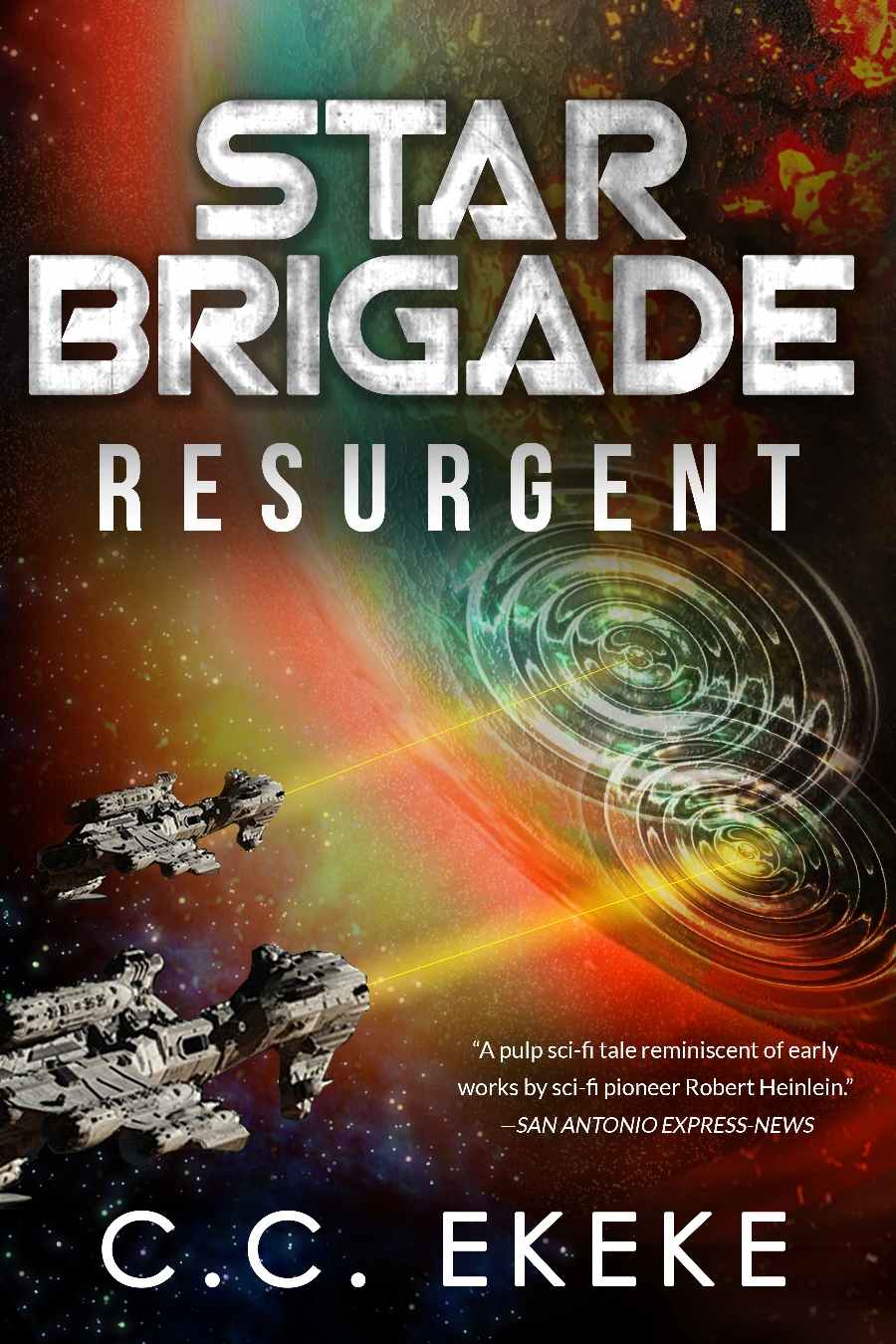 STAR BRIGADE: Resurgent
is a work of fiction. Names, characters, places, events and incidents are products of the author’s imagination or are used fictitiously. Any resemblance to actual events, locales, or persons, living or dead, is entirely coincidental.

All rights reserved. No part of this publication may be reproduced, stored in a retrieval system, or transmitted, in any form or by any means, electronic, mechanical, photocopying, recording, or otherwise, without the written prior permission of the copyright holder, except in the case of brief excerpts in critical reviews or articles.

Thank you for looking past the book cover,

and being one of my biggest supporters.

Get My Free Short Stories!

“[Why are you doing that?]” The Korvenite, Vantor, opened his eyes at the question, spoken in Korcei—his native language. Since this journey began one-and-a-half orvs ago, he had been praying to the deity Korvan, praying for a life of freedom…until the question interrupted him.

Vantor’s stomach grumbled loudly. One look at the skin that hung off his emaciated body confirmed hunger and he were old friends. The air around him stank of perspiration and other foul odors he tried to ignore. Vantor’s arms were in magnetic restraints up on the wall of a small cell, as were his feet. This prevented him from kneeling or even placing his fists across his chest in proper Korvenite praying posture. Regardless, he still felt obligated to pay homage to his god.

“[Why beseech a deity that doesn’t exist?]” the voice asked again, more scornfully now. It belonged to Rouma, one of the many Korvenite prisoners onboard with him. Vantor craned his head to the right, as much as his tight restraints allowed, and stared at the older Korvenite bound up next to him.

The dim halolights in this cell partially obscured Rouma’s features, but Vantor knew him without even looking. Milk-white skin, thick lavender-hue hair shorn to the scalp, eyes with black sclera and goldenrod pupils, all similar to Vantor’s own features. There were differences, like his birthmarks, small freckle-like marks all over his chest and shoulders. Most importantly, Rouma had lost all faith in Korvan. The humans may have been inhibiting his psionics, but Vantor didn’t need those gifts to sense that.

“[Because I trust in Korvan’s Way,]” Vantor replied, looking Rouma in the eyes. “[Korvan will—.]”

“[Korvan does not EXIST! What deity would leave his begotten race in shackles?!]” Rouma shrieked. Vantor gaped at his brethren’s barefaced hatred, too scared to try countering such loathing.

“[Leave the youngling in peace, Rouma!]” shrilled another voice, a female Korvenite. “[Just because you have lost your faith doesn’t mean you should deny him of his own.]”

Across the tiny cell were at least 20 or so other Korvenites, all bound to the wall like Rouma and Vantor. Most were asleep or too broken in spirit to pay attention. But the one speaking, a petite Korvenite with hair as short as her male counterparts, had black and gold eyes that still blazed with verve.

“[This is none of your concern, Cymae,]” Rouma spat out. “[Shut your trap and stay out of this!]”

“[Please stop,]” one of the more gangly Korvenites next to Cymae pleaded weakly. “[You will only bring pain upon us!]” But his warnings fell on deaf ears as another male chimed in.

He was tall, broad-shouldered and looked a little better fed than the rest. Vantor remembered his name—Khasos. “[There is still hope, Rouma. Korvan must have a reason for us enduring this penance.]”

Rouma snapped a furious glance at Khasos, straining against the magnecuff restraints to get at him, which was never a good idea. The more one struggled, the tighter the cuffs bound their occupants. “[You haven’t seen scores of our brethren die for this Korvan, only to see him NEVER answer your prayers, NEVER answer your pleas for deliverance, only to see yourself stripped of your abilities, stripped of your freedom until age and despair finally accept this entrapment!]”

It was as if a volcano erupted at the base of the Korvenite’s skull, ripping his thoughts apart.

The nerve shock was triggered by the restraining bolt that humans had placed in the skulls of every Korvenite they captured, mainly to contain his psionic gifts. The pain made Vantor violently convulse, and he wasn’t alone. All Korvenites in the cell felt the same stupefying agony. Their screams thundered in Vantor’s skull, as did his own. The pain skewered through him so intensely—blurring his vision.

Then just as quickly as it began, the shock ended. Vantor sagged forward and gasped for air, as did many Korvenites in the cell. Clarity slowly returned, just in time for him to feel every muscle fiber in his body burning. Some others, including Rouma, had passed out from the pain. Vantor envied them.

“Shut UP! Unless you want more!” a shout boomed over the room’s comms in Standard. Vantor’s eyes welled up with tears, the result of pain and venomous anger yet no means to express it. He looked up to see both Khasos and Cymae staring back, fatigued from the torture, but hope remained in their eyes.

Vantor smiled weakly in gratitude and before long, lost himself again in prayer to Korvan.

Captain Nathaniel Fennimore glared at the mini-viewscreen monitoring the Korvenite prisoners for a couple more macroms to make sure that they stayed settled. He sniffed with disappointment when they did, moving his hand away from the console that triggered their restraining bolts.

Any sentient who cared enough to observe Fennimore would find nothing extraordinary about him. He was an Earthborn human and all too proud of it: average features, average height, and a rather below-average physique with a small paunch that he’d promised to lose forever ago. A sandy crew-cut and a scraggly mustache he could never get to completely grow in capped off his very average look.

A week from tomorrow would be the fifteenth year Fennimore had been doing internment camp transfers on his S-305 medium transport, the
Fennimore
(he named it himself). This latest drop-off was to a camp another day away in the Mynar Sector, the uninhabited planet Alorum in the Rhyne System to be specific. He usually dropped off a hundred or more prisoners from internment camps at the outskirts of the Commerce Sector. But this run coincided perfectly with a stopover on Terra Sollus, another Rhyne System planet. After he unloaded this group of twenty Korvies, he wanted to catch as much of the planet’s Earth Remembrance Week festivities as possible.

It's a Girl Thing by Grace Dent
In Tasmania by Nicholas Shakespeare
Fighting Fit by Annie Dalton
Necrópolis by Carlos Sisí
Cane by Jean Toomer
Halloween Party by R.L. Stine
Ghost of a Chance by Katie MacAlister
Working It by Kendall Ryan
Becoming Carter (The Carter Series) (Volume 2) by W. S. Greer
Accused: A Rosato & Associates Novel by Scottoline, Lisa