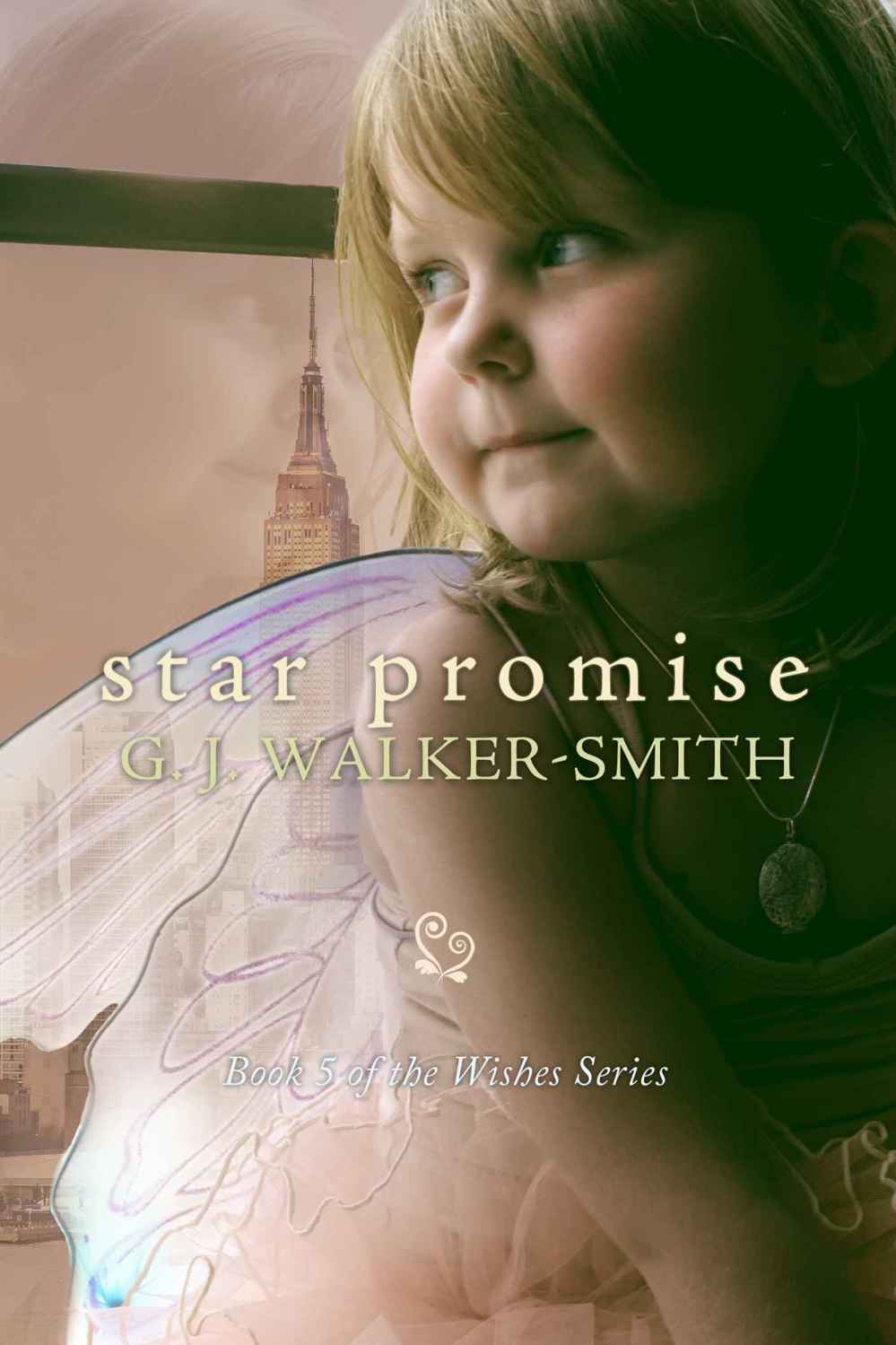 All rights reserved. No part of this book may be copied or reproduced without the written consent of the author.

This is a work of fiction. Names, characters, places and incidents are the product of the author’s imagination. Any resemblance to actual events, places or people, living or dead, is coincidental.

Other Books by G.J. Walker-Smith

the princess of gentle nudges and the queen of hard shoves.

To my family, thank you for affording me the opportunity to write when the mood hits, even at the expense of dinner and clean clothes. I love you very much.

To my friend, Sophia. Thank you for all that you do. When I grow up, I hope to be just as organised and brilliant as you are.

To my Gems. I am in awe of the unwavering support you all give, and I’m so very appreciative of the friendships I’ve made.

To my girlies in the NGs. Don’t tell any one, but I love you all dearly. Thank you for making my days so much shinier.

The Décarie men are no angels.

Adam can be regimented and stubborn, Ryan can be arrogant and cocky, and their father can be downright tyrannical. I’d been at war with all of them at one time or another, but tonight’s battle was with Jean-Luc.

Attending Ryan’s birthday dinner was a chore made more difficult by the fact that Adam didn’t show up. The king’s smugness when explaining why was almost harder to bear than the abominable food. “You must understand, Charli,” he said. “Work comes first. It’s the way of the world.”

He smirked. “Your world must be a wondrous place.”

Most of the time it was, just not when I was left to defend myself against Jean-Luc’s invisible blows.

I didn’t blame Adam for not showing up. Thanks to his father, his workload was impossible. Accepting a job at Décarie, Fontaine and Associates was a mistake, but the only one with the power to pull the pin was Adam. And as long as he felt the need to stand up to the king, that was never going to happen.

I wasn’t sharing the same level of career dissatisfaction. I loved my job at the gallery. I was surrounded by beautiful art all day and the cushy hours I worked meant that I got to spend plenty of time with my little girl.

Bridget had made the switch from the Apple Isle to the Big Apple without fuss, swapping days at the beach for days in the park. The change hadn’t hurt her. Her imagination was still perfectly in focus, which meant that as far as parenting goes, we were doing a good job.

While she was occupied playing under the coffee table, I slipped out to call her dad. Standing in the big empty foyer near the front door wasn’t going to buy me any privacy. I knew from past experience that even whispered words echoed off the marble floor, so I retreated to the downstairs bathroom.

Adam answered straight away. “Hey, I’m sorry.” I hadn’t even said a word yet. It proved that he knew what an ordeal dinner with his parents was when he wasn’t there. “I’ll make it up to you.”

“No. Your dad is being a jerk but I escaped.” I sat on the edge of the bath. “I’m hiding out in the bathroom. I wish you were here.”

“That could be dangerous – or productive, depending on how you look at it.” His low laugh sounded positively sinister, with good reason. We were ninety-nine percent sure that our daughter was conceived in that bathroom.

“Wise guy. What time do you think you’ll leave work?”

He sighed, and I could hear him shuffling papers around. “Late, I think. I’ve got so much to do.”

It was a reply I was expecting, but it still disappointed me. “Okay, well you know where I’ll be when you’re done.”

“No, in bed,” I laughed, “waiting for you to make it up to me for blowing off dinner.”

I returned to the lounge room feeling slightly more optimistic about making it through the evening until my father-in-law took one more shot at pulling me into line.

“I don’t enjoy tension, Charli. I hope you’ve calmed down.”

That was a lie. Jean-Luc thrived on tension. I didn’t bother answering. I sat next to Ryan and tried my hand at silent combat instead. I could’ve stared him down indefinitely, but the battle was cut short when Bridget and Fiona walked in. I’d been so focused on the king that I hadn’t even noticed they were gone.

Fiona kept a firm hold on Bridget’s hand as she paraded her around the room. My little girl looked thoroughly miffed, which was understandable considering she was sporting a heavy tweed coat in July.

I was annoyed for a different reason. Fiona constantly took it upon herself to rain expensive gifts on Bridget. Absolutely nothing was off limits and I resented it, but like most Décarie related gripes, I kept it to myself.

I managed to force an insincere thank you just before Bridget broke free and landed in my lap.

“Shush,” I replied, determined to keep the peace.

We made it through dinner and got out of there as quickly as we could.

I probably would’ve taken Ryan up on his offer of walking us home if we’d been heading that way, but I had bigger plans. If Adam couldn’t come to us, we were going to go to him.

The massive foyer of the office building looked even bigger than usual when it was all lit up and empty. I knew the front doors would be locked but was hopeful that someone would be there to let us in. I was prepared to bribe security with cake if necessary, but I didn’t get the chance. There wasn’t a soul in sight. Our surprise was totally ruined, leaving me with no choice but to call Adam to come downstairs to get us.

It seemed to take forever for him to get there. Bridget – ramped up on an excess of chocolate cake – killed time by jumping around on the front steps.

“Slow your roll, Bridge,” I ordered. “You’re going to hurt yourself.”

I didn’t give her declaration too much credence. There were no shades of grey with Bridget. She either loved something or she hated it. She also changed her mind at the drop of a hat. There was a fair chance that it would become her favourite piece by winter.

My opinion, on the other hand, was firm. I hated the bloody coat.

“We’ll talk about it another day,” I said, unwilling to discuss it with her.

“Papy gave me paper money.” She reached into the front pocket of her dress and pulled out a fifty-dollar bill. “See?”

I fought the urge to snatch it from her. “You’re a lucky girl,” I said falsely. “Put it back in your pocket, baby.”

I pointed at the glass behind her. “Because your daddy is here.”

As Adam ambled across the empty lobby, a security guard appeared out of nowhere and let him out. Finally he was free – at least until morning when he’d don his pretentious suit and go back again.

“Hey, little girl,” he crowed, scooping Bridget off her feet.

She leaned back and took his face in her hands. It was Bridget’s most powerful move, one she made when commanding total attention. “Ry’s very old today,” she announced making him laugh. “We happy-dayed him.”

“Awesome.” Adam leaned across and kissed me. “Sorry I missed dinner.”

I shrugged. “Are you hungry?” I half heartedly waved the plate of cake at him.

I couldn’t blame him for his look of distaste. The frosting had run and the chocolately mess was stuck to the Clingfilm.

“How about we find a restaurant and get Daddy some real dinner before he has his cake?” I suggested.

“Yeah.” Adam shifted his hold on Bridget to check his watch. “Let’s go.”

The balmy July night was perfect weather for walking, but Adam was tired and Bridget’s slow wander was beginning to grate on him. She was tired too, scuffing her little boots along the pavement with each step she took – but she still insisted on walking.

Her father finally lost patience and picked her up. Bridget didn’t complain, which meant she truly was ready to drop at any second. When she buried her head in his shoulder, I used the opportunity to dump the cake in a nearby bin while she wasn’t looking.

We ended up at the first restaurant we came across, a little Chinese place hidden behind scaffolding on Broadway. Adam ate, I drank tea and Bridget embarked on a one-girl sword fight with a pair of chopsticks. It was a short war. She climbed onto Adam’s lap a few minutes later and crashed, still holding her weapons.