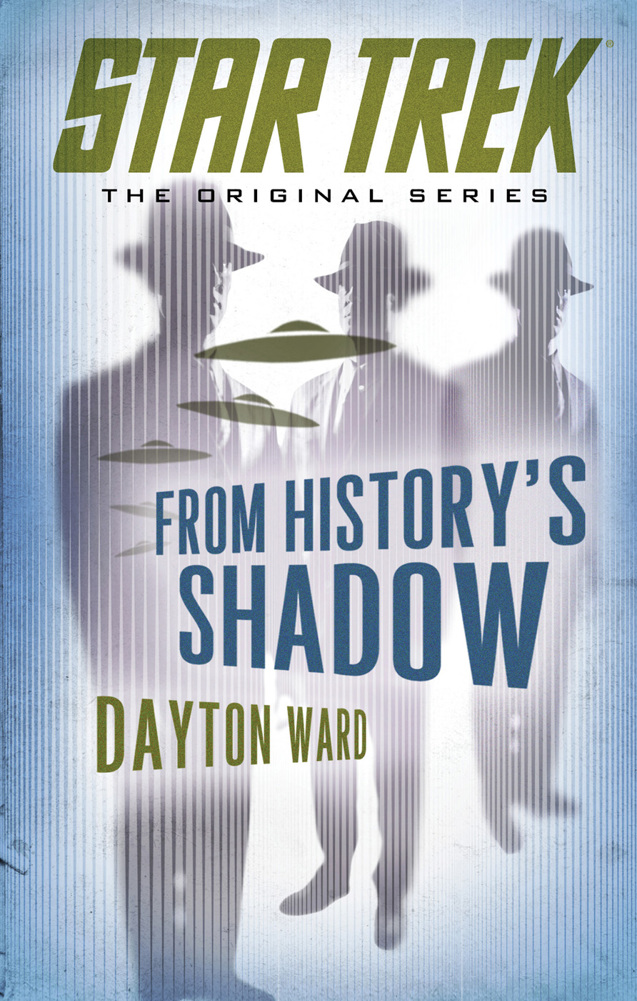 For Ira, Robert, Toni, and Jack:
Thanks for making us believe in the “Little Green Men.”

This story begins approximately one week after the return of the
U.S.S. Enterprise
from its time travel mission to 1968 Earth and its encounter with Gary Seven and Roberta Lincoln in the original
Star Trek
episode “Assignment: Earth.”

James Kirk emerged from the turbolift to find Spock waiting for him. Standing behind the first officer was a four-person security team—three junior officers led by the
Enterprise
’s veteran chief of security, Lieutenant Commander Barry Giotto. Beyond the small group, two more security officers with phasers drawn stood outside the doors at the end of the short corridor.

“They’re still in there?” Kirk asked, nodding toward the doors leading to the cargo bay on this deck.

“We’ve secured all access points, sir,” Giotto added, offering a formal nod that was fitting for his stern expression, which in turn seemed to complement his gray hair, itself a rarity among security officers. “Nobody’s getting in or out of there without our knowing about it.”

“They managed to sneak in there, well enough,” Kirk said. “Any idea how they got aboard in the first place? Have they been here since we left Starbase 9?” The
Enterprise
had been on course for its next assignment since departing the starbase
nearly a week earlier. There had been no stops or contacts with other vessels during that time, and—to the best of Kirk’s knowledge—the only incoming or outgoing communications were of the usual authorized and expected variety.

Though his expression remained fixed, Spock’s eyes narrowed. “Lieutenant Uhura has already dispatched a message to Starbase 9 with a request to inquire into that possibility. A reply should be forthcoming.”

“Then I guess we’re on our own for the time being.” Any discussion about a possible security breach, and whether the intruders hiding within the cargo bay were the only results of that infringement, would have to wait until their uninvited guests were in custody. “What do we know about them?” Kirk asked, gesturing toward the door.

Spock held up his tricorder. “According to my scans, one of the life-forms appears to be female; a native of Certoss Ajahlan.”

His brow furrowing, Kirk asked, “That name rings a bell. The Taurus Reach?”

“Correct, sir,” replied the first officer. “According to our data banks, the
U.S.S. Endeavour
visited the system during their surveys of the region last year. Prior to that, contact was limited to unmanned probes and a first-contact team when Federation colonization and exploration efforts moved into the Taurus Reach. By all accounts, the Certoss people are peaceful, bordering on pacifistic, and their culture revolves around an ardent devotion to the arts.”

“So how does a peaceful Certoss native turn up uninvited in one of our cargo bays?” the captain asked.

Spock’s right eyebrow rose. “I am at a loss to answer that, just as I cannot explain why the other intruder is a Vulcan.”

That caught Kirk by surprise. “You’re sure? Any chance it could be a Romulan?”

“A thorough examination by Doctor McCoy should remove any doubts,” Spock said, “but my tricorder readings indicate Vulcan physiology.” As though anticipating Kirk’s next remark, he added, “The fact that both intruders represent pacifist civilizations is not lost on me, Captain.”

“I never thought it was,” Kirk said, suppressing a smile before returning his full attention to the very serious matter at hand. “What about their trying to get into the comm system? Do we know who they might be trying to contact?”

Shaking his head, Spock replied, “No, sir. I submit that such questions might best be answered by our guests.”

“Agreed. Did you scan any weapons in there?”

“Affirmative.” Spock looked at his tricorder again before adding, “It appears to be a rudimentary particle beam weapon.”

Pointing to one of Giotto’s junior security officers, Kirk indicated for the young crewman to hand over his weapon. He took the Type II phaser and verified its power setting. “Phasers on stun, Mister Giotto. I’ll lead the way.”

To his credit, the security chief maintained his professional bearing. “Captain, with all due respect, my team and I can secure the room first.”

With a small grin, Kirk reached out and clapped the older man on his left shoulder. “You never stop trying to keep me out of trouble, do you, Barry?”

“Probably true,” Kirk said as he began moving toward the cargo bay. He nodded to the pair of security guards still
standing watch near the door. Ensigns Nick Minecci and Pasqua Hawthorne both nodded at his approach. Eyeing both junior officers with what he hoped was a look of confidence, Kirk said, “Ready to say hello?”

“Right behind you, Captain,” Hawthorne added.

To Kirk’s right, Spock stepped to the nearby comm panel and pressed its activation control. “Spock to bridge. Deactivate the security lock on Cargo Bay 1.”

Kirk moved to stand to the left of the door, with Giotto mimicking him on the entrance’s opposite side. “Alternate entry,” he said to the security team. “If you detect a threat, don’t hesitate to fire.”

The doors parted with their characteristic high-pitched pneumatic hiss, and Kirk got his first look at the chamber beyond. Containers of varying size and shape occupied the space along the far bulkhead, either stacked atop one another on the deck or else stored on shelving units rising three stories to the ceiling. A large expanse of floor right inside the entrance was empty. He scanned the shelves, seeing nothing out of the ordinary, and nothing appeared to be moving among the crates. Once past the doorway, he sidestepped to his left and saw Giotto mirroring his movements as the security chief stepped to his right. At the door, Spock activated his tricorder, and the device’s warbling tone echoed through the cavernous bay as the science officer conducted his scans.

“Ten meters in front of us,” the Vulcan said, pointing toward the center of the room. “Both life-forms are stationary.”

“Whoever you are,” Kirk called out, raising his voice, “there’s nowhere for you to go. I’m Captain James Kirk, in
command of this vessel. If you surrender peacefully, I promise you will not be harmed.” When no answer came, Kirk frowned. “Okay,” he said, looking to Giotto, “let’s go.”

Following Spock’s direction, Kirk moved toward the center of the room, his phaser leading the way. As he approached the set of stacked cargo containers separating him from their still-unidentified guests, he motioned for Giotto to make his way around the far side of the storage units. Even without Spock’s tricorder, Kirk now was able to sense the intruder’s presence. He heard breathing and the rustling of clothing. Muscles tensing in anticipation of a confrontation if not a full-blown firefight, Kirk stepped around the stacked containers and leveled his phaser at the figure standing in the open. It was the Vulcan, who appeared flushed and disheveled. At his feet lay what could only be the particle weapon detected by Spock’s tricorder.

“That is my only weapon,” he said, standing in place and holding his hands away from his body. “I am not a threat. It is my counterpart who should concern you.”

Before Kirk could ask what that meant, Spock called out, “Captain, the Certoss life sign has disappeared.”

“Captain!” shouted a voice, Giotto’s, from the stack of crates to his right.

The call was followed by the sounds of scuffling and fighting. Kirk began moving in that direction, catching sight of Ensigns Minecci and Hawthorne. “Watch him!” Kirk ordered before darting between a pair of cargo containers, following the sounds of struggle until he saw Giotto flung backward into one of the larger crates. The security chief grunted in pain as he struck the oversized, unyielding box, and it was only then that Kirk realized Giotto no longer held his phaser.

“He’s got Giotto’s weapon!” Kirk warned the rest of his people as he lunged forward, stepping around another stack of containers and catching sight of the dark figure trying to hide among another freight consignment. Kirk’s eyes registered the phaser in the intruder’s hand even before the weapon’s emitter moved to aim at him.

His phaser’s harsh blue-white beam sliced the air, catching the stowaway in his chest and sending him tumbling backward to the deck. “He’s down!” Kirk called, stepping toward the stunned intruder while keeping his phaser trained on him.

Though humanoid, the Certoss’s skin possessed a pigmentation that resembled copper. There was no hair on her head, and Kirk noted the three long fingers and what appeared to be two opposing thumbs on each hand. She was dressed from neck to toe in a dark gray skin-tight bodysuit. As Giotto moved into view, one hand rubbing the back of his neck as he retrieved his phaser from the Certoss, Kirk asked, “Are you all right?”

“My pride hurts worse than anything else, sir,” replied the security chief. “I don’t know where she came from. One second I was alone, the next she was in my face.”

“Spock said something about her life signs disappearing from his tricorder scan,” Kirk said. “Maybe she’s got some kind of personal cloak or shield.”

Pointing to the odd device the Certoss intruder wore strapped to her chest, Giotto said, “Could be this thing. I’ve never seen anything like it.”

“We’ll have Spock and Scotty give it the once-over.” Hearing footsteps behind him, Kirk turned to see Spock with Minecci and Hawthorne, escorting the Vulcan intruder.

“I regret trespassing aboard your vessel, Captain,” the Vulcan said, indicating the motionless Certoss. “It was unintentional, I assure you; a consequence of my pursuing this individual.”

It took Kirk an extra moment to realize that the trespasser’s clothing was not typical Vulcan civilian attire. Instead, it consisted of black trousers and a matching jacket worn over a white shirt with a length of black ribbon hanging from his neck. Kirk recognized it as a business suit, of the sort he had seen less than a week ago.

On Earth. Three hundred years ago?

Kirk looked to Ensign Minecci, who had moved to cover the fallen Certoss. “Minecci, alert sickbay. Tell Doctor McCoy he may need to provide medical treatment for a female Certoss native.”

“Aye, sir,” the ensign replied before stepping back from the Certoss and disappearing between the stacks of crates.

For the first time, Kirk lowered his phaser as he regarded the Vulcan. “Who are you, and how’d you get aboard my ship? And while you’re at it, perhaps you’ll tell me why you’re wearing clothing that’s three centuries out of date and from my planet instead of yours.”

“Three centuries,” the Vulcan repeated. “Interesting. It is your contention that you traveled through time to Earth, and that we are now in what would be my future?”

Kirk nodded. “That’s right.” Then, it occurred to him that until this very moment, he had failed to consider one very obvious possibility. “Did you somehow get aboard while we were back in Earth’s past?” Of course, even as he spoke the words, he realized he was prompting more questions than answers. “What were you even
doing
on Earth, anyway?”