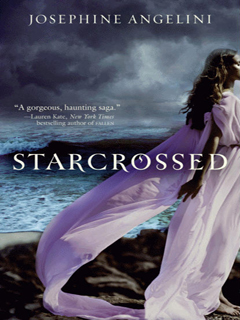 How do you defy destiny?

Helen Hamilton has spent her entire sixteen years trying to hide how different she isno easy task on an island as small and sheltered as Nantucket. And it's getting harder. Nightmares of a desperate desert journey have Helen waking parched, only to find her sheets damaged by dirt and dust. At school she's haunted by hallucinations of three women weeping tears of blood . . . and when Helen first crosses paths with Lucas Delos, she has no way of knowing they're destined to play the leading roles in a tragedy the Fates insist on repeating throughout history.

As Helen unlocks the secrets of her ancestry, she realizes that some myths are more than just legend. But even demigod powers might not be enough to defy the forces that are both drawing her and Lucas togetherand trying to tear them apart.

But if you bought me a car now, it would be yours

when I go away to school in two years. Still practically

her father was no sucker.

Lennie, just because the state of Massachusetts

Doesnt mean that I have to agree with it. He was winning, but

You know, the Pig only has another year or two left in her,

Helen said, referring to the ancient Jeep Wrangler her father

drove, which she suspected might have been parked outside the

castle where the Magna Carta was signed. And think of all the gas

money we could save if we got a hybrid, or even went full electric.

Wave of the future, Dad.

Helen Hamilton groaned softly to herself and looked out over the

railing of the ferry that was bringing her back to Nantucket. She

contemplated another year of riding her bike to school in November

and, when the snow got too deep, scrounging for rides or,

worst of all, taking the bus. She shivered in anticipated agony and

tried not to think about it. Some of the Labor Day tourists were

staring at her, not unusual, so Helen tried to turn her face away as

subtly as she could. When Helen looked in a mirror all she saw

were the basicstwo eyes, a nose, and a mouthbut strangers

from off island tended to stare, which was really annoying.

Luckily for Helen, most of the tourists on the ferry that afternoon

were there for the view, not her portrait. They were so determined

felt obliged to ooh and aah at every marvel of the Atlantic Ocean,

though it was all lost on Helen. As far as she was concerned, growing

up on a tiny island was nothing but a pain, and she couldnt

wait to go to college off island, off Massachusetts, and off the entire

eastern seaboard if she could manage it.

It wasnt that Helen hated her home life. In fact, she and her

father got along perfectly. Her mom had ditched them both when

Helen was a baby, but Jerry had learned early on how to give his

daughter just the right amount of attention. He didnt hover, yet he

was always there for her when she needed him. Buried under a thin

layer of resentment about the current car situation, she knew she

could never ask for a better dad.

toward her was Claire, Helens best friend since birth. She tipped

unsteady tourists out of her path with artfully placed pushes.

The sea-goofy day-trippers swerved away from Claire like she

platform sandals. She glided easily through the stumbling riot she

had created and slid next to Helen by the railing.

Giggles! I see you got some back-to-school shopping done, too,

Jerry said as he gave Claire a one-armed hug around her parcels.

Claire Aoki, aka Giggles, was a badass. Anyone who took a look at

recognize her inherent scrappiness ran the risk of suffering horribly

at the hands of a grossly underestimated opponent. The nickname

Giggles was her personal albatross. Shed had it since she

was a baby. In her friends and familys defense it was impossible

to resist calling her Giggles. Claire had, hands down, the best laugh

in the universe. Never forced or shrill, it was the kind of laugh that

could make anyone within earshot smile.

Fo-sho, sire of my BFF, Claire replied. She hugged Jerry back

with genuine affection, ignoring his use of the dreaded nickname.

Might I have a word with your progeny? Sorry to be so rude, but

But then youd have to kill me, Jerry finished sagely. He

soda while his daughter, the chief of the food police, wasnt

Wacha got in the bag, dad? Claire asked. She grabbed Helens

loot and started rifling through. Jeans, cardigan, T-shirt, under

. . . whoa! You go underwear shopping with your dad? Ew!

Its not like I have any choice! Helen complained as she

snatched her bag away. I needed new bras! Anyway, my dad hides

at the bookstore while I try everything on. But trust me, even

knowing hes down the street while I shop for underwear is excruciating,

she said, a smile on her reddening face.

It cant be all that painful. Its not like you ever try to buy anything

sexy. Jeez, Lennie, do you think you could dress more like

my grandma? Claire held up a pair of white cotton briefs. Helen

bag while Claire stretched out her magnificent laugh.

youll catch a fatal case of loser from me?

Youre all so deliciously corruptible. And I love the way you blush

whenever I talk about underpants.

barged in close to them. Working with the momentum of the

deck, Claire nudged the tourists out of the way with one of her

ninja balance moves. They stumbled aside, laughing about the

choppy water, clueless that Claire had even touched them. Helen

to slouch down against the railing to better meet her

Unfortunately for achingly shy Helen, she was an eye-grabbing

the Buddha, Muhammad, and Vishnu to make it stop, but she still

growth spurt at night. She promised herself that at least if she

throw herself off the top of the lighthouse in Siasconset.

Salespeople were always telling her how lucky she was, but not

even they could find her pants that fit. Helen had resigned herself

enough she had to go a few sizes too big, but if she didnt want

them to fall off her hips, she had to put up with a mild breeze flapping

around her ankles. Helen was pretty sure that the wicked

jealous salesgirls didnt walk around with chilly ankles. Or with

Stand up straight, Claire snapped automatically when she saw

Helen slouching, and Helen obeyed. Claire had a thing about good

posture, something to do with her super-proper Japanese mother

and even more proper, kimono-wearing grandmother.

Okay! On to the main topic, Claire announced. You know that

The one in Sconset? Sure. What about it? Helen asked, picturing

the houses private beach and feeling relieved that her dad

When Helen was a child she had very nearly drowned, and ever

since had secretly believed that the Atlantic Ocean was trying to

kill her. Shed always kept that bit of paranoia to herself . . . though

she still was a terrible swimmer. To be fair, she could tread water

for a few minutes at a time, but she was rotten at it. Eventually, she

and no matter how hard she paddled.

It finally sold to a big family, Claire said. Or two families. Im

not sure how it works, but I guess there are two fathers, and theyre

brothers. They both have kidsso the kids are cousins? Claire

wrinkled her brow. Whatever. The point is that whoever moved in

has a bunch of kids. And theyre all about the same age. There are,

like, two boys that are going to be in our grade.

And let me guess, Helen said, deadpan. You did a tarot reading

with you and then theyll tragically fight to the death.

Claire kicked Helen in the shin. No, dummy. Theres one for

Helen rubbed her leg, pretending it hurt. Even if Claire had

kicked Helen with all of her might, she still wouldnt be strong

enough to leave a bruise.

One for each of us? Thats uncharacteristically low drama of

you, Helen teased. Its too straightforward. I dont buy it. But

how about this? Well each fall in love with the same boy, or the

I will fight each other to the death.

Whatever are you babbling on about? Claire asked sweetly as

she inspected her nails, feigning incomprehension.

field trip and you always predict that something amazing is going

to happen. But every year the only thing that amazes me is that you

havent slipped into a boredom coma by winter break.

Why do you fight it? Claire protested. You know eventually

something spectacular is going to happen to us. You and I are way

too fabulous to be ordinary.

Helen shrugged. I am perfectly happy with ordinary. In fact, I

think Id be devastated if you actually predicted right for a change.

Claire tilted her head to one side and stared at her. Helen untucked

her hair from behind her ears to curtain off her face. She

hated to be watched.

I know you would. I just dont think ordinarys ever going to

Helen changed the subject. They chatted about their class schedules,

running track, and whether or not they should cut bangs.

Helen wanted something new, but Claire was dead set against

Helen touching her long blonde hair with scissors. Then they realized

zone of the ferry, and had to hastily backtrack.

They both hated that part of the ferry, but Helen was particularly

sensitive about it; it reminded her of this creepy guy that had followed

her around one summer, until the day he just disappeared

off the ferry. Instead of feeling relieved when she realized he wasnt

coming back, Helen felt like she had done something wrong. She

had never brought it up to Claire, but there had been a bright flash

and a horrible smell of burnt hair. Then the guy was just gone. It

still made her queasy to think about it, but Helen played along, like

it was all a big joke. She forced a laugh and let Claire drag her

along to another part of the ferry.

Jerry joined them as they pulled into the dock and disembarked.

the next day, though since it was the last day of summer, the outlook

Helen worked a few days a week for her father, who co-owned the

islands general store. Apart from a morning paper and fresh cup of

caramels and toffee in real crystal jars, and ropes of licorice whips

sold by the yard. There were always fresh-cut flowers and handmade

for the tourists, and refrigerator essentials like milk and

eggs for the locals.

About six years ago the News Store had expanded its horizons

and added Kates Cakes onto the back, and since then business had

exploded. Kate Rogers was, quite simply, a genius with baked

goods. She could take anything and make it into a pie, cake, popover,

brussels sprouts and broccoli succumbed to Kates wiles and became