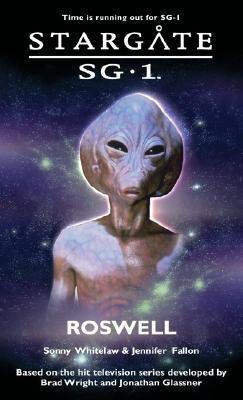 This File was created for

Post hoc, ergo propter hoc,
(trans.) after this, therefore because this (n): the logical fallacy of believing that temporal succession implies causation.

Lieutenant
Colonel Cameron Mitchell knew to the second how long it took to dial Earth and for the Stargate worm-hole to stabilize. With a couple of hundred screaming villagers on their sixes, all of whom seemed to be waving ugly looking pikes and other various nasty, not to mention dangerously pointy objects at them, they were going to come up short by about eighteen seconds.

A familiar chorus of, “All hallowed are the Ori!” accompanied the murderous mob around the bend in the track where it opened out on to...

Last night's rain had transformed the ground around the Stargate platform into the perfect venue for the next intergalac-tic mud-wrestling championships. Now Cam understood why previous SG teams, as well as remarking on the issue of the local hospitality—or lack of it—had labeled this place
Bayou.
A full day's rain had turned the already sodden ground around the platform into a puke-green quagmire. If Sam's progress through the stuff as she fought the sucking, thigh deep crud to reach the DHD was anything to go by, his eighteen-second shortfall was wildly optimistic.

And the stench... Cam's olfactory nerves recoiled as he tried to identify it. Nope. He couldn't name it. This stuff was in a league of its own. A whole new species of putrescence.

Daniel Jackson, who'd been a dozen steps ahead of Cam and Teal'c, hesitated on the edge of the bog.

“After you, Jackson,” Cam invited, turning to cover his escape. With a grimace, Daniel lifted his P-90 above his head and waded into the slop, while Cam raised his weapon and planted a short burst into the mulchy ground just ahead of the oncoming mob.

Pivoting around beside Cam, Teal'c also fired off a long burst into the base of a tree before bolting after Daniel, changing clips as he went. The C4 Teal'c had thoughtfully planted at the tree's base on their arrival exploded, temporarily halting the onslaught.

“We will defend ourselves!” Cam yelled, the warning more a matter of protocol that any real hope the bucolic citizens of this particular hellhole of a planet were listening, even if they could hear him after that explosion. Still, if the UN ever took it into its collective head to play off-world diplomacy, he could honestly say that he'd given fair warning. Several times.

“Wasting your breath,” Daniel yelled back at Cam, pushing through the mud after Sam. “They're convinced death is the road to Ascension.”

Different planet; same fundamentalist argument. First it was the Goa'uld playing god, now the Ori. As far as Cam was concerned they were both parasites, it was only a question of magnitude.

“Strike down the unbelievers!”

And to increase the crap factor by a few notches, the not-so good people of Bayou weren't baulking at making the whole religious crusade thing a family affair.

The first to recover from the explosion were a horde of raggedy-assed kids, armed with slingshots, long knives, and the glazed expressions of fanatics-in-training. They clambered over the tree that the C4 and Teal'c's shooting had brought down and just kept right on coming.

Cam raised his weapon again. If what they'd witnessed in the village was anything to go by, these same kids had been responsible for butchering the diplomatic team the International Oversight Committee had—in all its naive, bureaucratic wisdom—seen fit to send to this planet.

“All hallowed are the Ori!”

A short burst from either Daniel or Sam's P-90 behind him sent
a splattering of mossy clods into the kids' faces, slowing them
just long enough for Cam to turn and size up his team-mates'
progress. Daniel was fighting the suction every step. Teal'c—whose feet were just smaller than those of a Kodiak bear—had been reduced to plowing his way through using brute force. Opting for a different tactic, Cam took the mud at speed, managing to get well ahead of his Jaffa teammate before the goop sucking at his boots slowed him to Daniel's pace.

Being lighter, Sam was having more success. She had almost reached the platform. That might buy them an additional couple of seconds. Still not enough, but once he and Daniel got through this gunk, they'd be able to provide suppressing fire from the elevated position of the Stargate platform. Assuming suppressing fire actually worked on people hell-bent on martyrdom.

“Hallowed be the Ori!”

Something hit Cam's backpack. It was followed a moment later by several more thumps from what he was certain were the
small, spiked iron balls the Bayou kids used in their slingshots. If one of the dartballs connected with his head, it would penetrate his skull just far enough to puncture the meninges and allow the fluid to leak out. Enough dartballs would eventually kill him.

He
knew that because one of the Marines who'd gone missing with the diplomatic team three days earlier had still been alive when they'd found him hanging in the trees just outside the village. A veteran of a hundred encounters with the Goa'uld, the sergeant had stubbornly refused to die until he'd been able to report exactly what had happened to the eight-man IOC delegation to Bay0ou.

Another dartball struck Cam, this time in the fleshy part of his butt.

“Ow!” That was gonna smart when it came time to sitting down and writing up this report. And since his reports tended to be influenced by how much pain he was in at the time, he wasn't going to have a whole lot of nice things to say about this place. “Sam?”

“Almost there!” Carter had reached the platform. She grabbed the pitted base of the DHD to haul herself out.

''Hallowed are the Ori!”

The stinging in his butt was real, but it was the burning in Cam's quadriceps that spurred him on. It was a familiar pain; an old friend that, along with a promise from General O'Neill that he could have anything he wanted, had hauled him out of a body brace after his F-302 had plowed in at the Battle of Antarctica.

Focused on making his way through the thigh-deep muck, Cam had tuned out both the smell and relatively unimaginative rhetoric until,
“Strike down their woman!”
caught his attention.

He glanced over his shoulder—and ducked to avoid one of the incoming dartballs. Okay, that was a mistake, because it put his face in the direct path of another dart, which sliced open his cheek and took out a piece of his nose as it passed. Still, that didn't bother him nearly so much as the realization that the villagers, who'd grown up running through Bayou mud, had recovered any ground they'd lost through smoke grenades, C4, and Teal'c's one man deforestation program.

SG-1 would be
lucky
if they had eighteen seconds.

Sam was punching in the first symbol on the DHD when one of the golf ball sized missiles caught her in the calf. She kicked her foot back, shaking the thing off like a pesky mosquito, but then a whole slew of them started pounding her legs. Specks of blood appeared through the small rips in her pants.

“Blessed are the Ori!”

Daniel hauled himself up onto the platform, spread out his arms and, dripping mud and looking more like the Creature from the Black Lagoon than an archeologist, stooped over Sam to shield her. Their attackers responded by fanning out, continuing
their barrage on Sam from different angles, knocking her arms aside before she could finish the dialing sequence. Angling her body lower, she finished punching in the symbols with
her elbow.

The
amber glow of the first chevron locking into place in the Stargate offered Cam only minimal reassurance. While his pack
protected his back, and hunching forward kept his head from
taking any hits, nothing could stop the darts striking his arms
and butt. They were all taking a pounding. Dozens of tiny
gashes down Daniel's arms and legs were turning dark with
blood. The Chinese might've invented death by a thou-sand
cuts, but these slingshot-wielding youths from the Village of
the Damned
had discovered a whole new variation.
“Kill the heretics!”

“That chanting is
really
starting to piss me off.”

The third chevron locked. More dartballs zinged past, lodging in Daniel and Sam's pack and legs while they angled around
to take cover behind the DHD. The darts started bouncing
off the Stargate and DHD platform with staccato metallic
twangs.

Lunging
forward, Cam grabbed the edge of the platform, hauled
himself out of the mud and, almost slipping on the slimy
crud, spun around and brought his weapon to bear. “Crap.”

Teal'c was wrenching his body about, trying to fling off two greasy-haired kids hanging from his arms. The bloodied punctures
in his neck were testimony to the number of dartballs he'd
taken.
Hopefully the recent addition of curly black hair on
the
Jaffa's head had prevented the spikes from penetrating his skull too deeply.

The fifth chevron slammed into place with a solid reassuring
thunk.

Completely unmindful of his pals, one of the youths raised a long knife, flashed a set of cavity-filled teeth, and took a swing at Teal'c's momentarily exposed armpit. The knife abruptly flew backwards, its force propelling the wielder into the green slop. The shot rang in Cam's ears. He glanced at Daniel. For a civilian, he wasn't a bad marksman. But Teal'c was in peril. Three more kids had converged on him, swinging curved knives. The adults were right behind them, egging them on.

“Hallowed are those who kill the unbelievers!”

More fire from Daniel targeted the weapons rather than the wielders, but then one guy picked up a boy of about seven and flung him at Teal'c's head, distracting the Jaffa so the rest of his brood could slash at his exposed chest. A spark of cold rage briefly tempted Cam into emptying the contents of his P-90 into the whole pious pack of 'em. What kind of sick religion used kids as weapons?

He sighted his gun. An unwelcome memory dredged up by Varrick's godforsaken machine momentarily filled his vision: three trucks crammed full of refugees destroyed in a fiery blast from a bomb he'd dropped on them. He never did learn exactly how many civilians—how many
kids
—he'd killed that day, because from fifteen hundred feet and four hundred knots, there wasn't a whole lot to see.