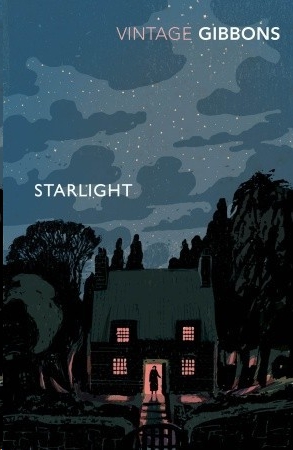 Gladys and Annie Barnes are impoverished sisters who have seen better times. They live in a modest cottage in the backstreets of Highate with Mr Fisher, a mild but eccentric old man living secretively in the attic above them. Their quiet lives are thrown into confusion when a new landlord takes over; a dreaded and unscrupulous ‘rackman.’ He installs his wife in part of the cottage in the hope that there she will recover from an unspecified malady. With a mounting sense of fear, Gladys and Annie become convinced she is possessed by an evil spirit…

Stella Gibbons was born in London in 1902. She went to the North London Collegiate School and studied journalism at University College, London. She worked for various newspapers including the
Evening Standard
. Stella Gibbons is the author of twenty-five novels, three volumes of short stories, and four volumes of poetry. Her first publication was a book of poems,
The Mountain Beast
(1930), and her first novel,
Cold Comfort Farm
(1932), won the Femina Vie Heureuse Prize for 1933. Amongst her works are
Christmas at Cold Comfort Farm
(1940),
Westwood
(1946),
Conference at Cold Comfort Farm
(1949) and
Starlight
(1967). She was elected a Fellow of the Royal Society of Literature in 1950. In 1933 she married the actor and singer Allan Webb. They had one daughter. Stella Gibbons died in 1989.

The fated people – the worshippers and poets, the magicians and lovers – who live by the light of the stars

‘Well, what’s he like? Hurry up, can’t you? Lord knows it’s miserable enough, stuck here all evening … I been looking for you since the church went seven.’

Gladys Barnes did not hurry up. She just glanced through the open door into the bedroom she shared with her sister, who was sitting up in their big double bed. Annie was wearing two thickish old coats, and a woollen balaclava helmet shrouded her untidy silvery head; her eyes glared with eagerness through her glasses.

‘I’m putting my slippers on, should think you could see,’ Gladys’s tone was repressive, but less hurried, less nervous, than usual; this was always so, after her Sunday evening church-going.

She unlaced her shoes without haste, and put them side by side under the table. She untied a scarf from her head and folded it and laid it in a drawer, and slipped on a large wool cardigan and settled it about her. Then, and only then, did she look again at her sister.

‘For ’eaven’s
sake
, Glad,’ said Annie, in a voice suggesting the control, with difficulty, of seething impatience.

‘S’pose I can take me things off, can’t I?’ Gladys advanced into the bedroom with an unhurried step, unlike her usual blundering bustle. ‘Pillows all upside down again,’ she observed, whisking away the warm untidy nest they made and shaking them, in spite of protest, into coolness and plumpness.

‘You can’t half be unkind, Glad,’ Annie said resentfully, ‘you know I don’t never get out not to see anyone nor hear a bit of news.’

‘If I don’t,’ Gladys said awfully, ‘I ought to, by this time.’ She sat down in an old Windsor chair, which she pulled out so that she was beside her sister. Then stooped, with difficulty for she was stout, and picked a thread off the worn rug.

‘’Ave everything comfortable, then we can enjoy ourselves,’ she observed.

Gladys leant back, with folded hands. ‘Like a cup of tea? I could do with one.’

‘I don’t
want
no tea, I want to hear what he’s like and what the vicar said and everything … I don’t know though, p’raps it would be nice. You can tell me while you’re making it.’

Gladys’s desire to tease, concealed beneath all this picking up of bits of cotton and plumping of pillows, had apparently died away. But she did not move.

‘Tisn’t all that far.’ Annie was now leaning comfortably back against the pillows, and the glare from behind her glasses had subsided.

‘I don’t know, must be half a mile. More like three-quarters.’

‘Three-quarters! You and your three-quarters, it’s not more than half, if that. I used to run along there in no time. I remember one Christmas Eve I was late for that service they always have, what’s it called, the one with the candles. They have the church all dark, and walk round it singing, lovely it used to be, and then they light it up again –’

‘No that’s Easter, Glad. Something – something – I shall forget my own name next.’

‘It’s on the tip of my tongue, too.’ There was a pause, while both sisters gave quiet attention to the matter.

The room was small and low. It was lit by a central light, weakly shining from the middle of a ceiling dark brown with age, under a torn shade equally grimed, and furnished with pieces frail with age and the battering of many moves, spread over the seventy-odd years of the sisters’ joint life. The wallpaper’s pattern was almost indistinguishable, and older; even older. Gladys and Annie alleged that it was bunches of pink roses tied with blue ribbons. The bed and its shiny blue coverlet was just, but only just, clean.

Dust, grease, dimness. Yet the room was cosy. Thin red curtains kept out the foggy night at the square window, and Gladys, the one who went out to work every day, knew that, from outside, they made a faint but heartening ruby glow; the little, old, broken gas-fire burned with an opulent roasting flame. It ate shillings, fair ate them, was the sisters’ verdict, but what could you do?

On the mantelpiece there was one of the pink roses given away with a detergent packet; Gladys had put it into a green glass vase. Annie liked a bit of green; always had. The sisters had been born in the country.

Gladys shook her head at last.

‘I can’t remember, neither. Put the kettle on, Glad, and let’s have our tea.’

The new curate appeared to have been forgotten. But not so. When the tea had been measured into a brown pot just big enough for the two, and they had suggested having a bite to eat, and said that they really oughtn’t to, and reminded each other that it was only Sunday, there was the week to get through, and then given way as they usually did and set out the sliced bread and the margarine, the subject was reintroduced.

‘Young,’ pronounced Gladys, a pleased light in her big blue-grey eyes, as if at something remembered. ‘Around about twenty-six, I’d say. And ever so … severe.’

‘Severe! But nice-looking, is he, Glad? The Reverend – Gerald – Corliss. Posh name.’ Annie’s quick, babbling voice hurried out the words.

‘Well that’s not his fault. They have to be.’

‘No they don’t not in our church, that’s Roming Catholics.’

‘Course I know some people do. Tisn’t the same.’

Here there was an interruption to the talk.

It was so faint that ears less accustomed to being on the alert for the tiniest sound that hinted and threatened an invasion of privacy might have overlooked it. But Gladys and Annie both heard the slow footsteps padding across the floor of the attic above, and both paused, Annie with her bread and margarine and Gladys with her cup, suspended. They exchanged significant nods.

‘Think we ought to run up and see?’

‘Nar!’ Annie’s sudden violent outward sweep of her hand in rejection of the suggestion, and the harmless shout in her voice, hinted at a girlhood spent in a younger, rougher, yet more innocent London. ‘He likes to keep himself to himself. You know that.’

‘I know he’s very funny, you have to admit it.’

‘No more mental than what you are,’ Annie said obstinately. ‘On his own, no-one to look after him …’

‘A lot’s done for people that didn’t used to be, Annie. For mental people and old folks … and homes and that …’

Gladys’s voice trailed away and her sister, glancing quickly at her, said, as loudly as her weak voice permitted:

‘It’s all that Jean calling him Old Mental. Like her sauce. He’s an educated man. Used to be a teacher, I shouldn’t wonder, and come down in the world.’

‘Ought to know better than going out begging, then.’

‘It isn’t begging, not downright it isn’t. He works,’ Annie protested.

‘Work! Bits of dolls made of straw – who wants them?’

‘Go on about the curate,’ Annie said.

Gladys began on a rambling and roundabout account of the new curate’s first Evensong at Saint James’s, interrupted by questions from her sister about who was there, and what everybody was wearing. This evening, there was also a young girl and her boy to be described, whose banns had been published.

Belle Cora: A Novel by Margulies, Phillip
Amanda on the Danube: The Sounds of Music by Darlene Foster
A Mind to Murder by P. D. James
True Riders by Catherine Hapka
Brilliance of the Moon by Lian Hearn
A Bit of Bite by Cynthia Eden
The Hunter's Moon (The Secret Warrior Series) by Beth Trissel
Cloud Atlas by David Mitchell
The Death of an Irish Sinner by Bartholomew Gill
Sex and the Widow Miles (The Women of Willow Bay) by Reinhardt, Nan