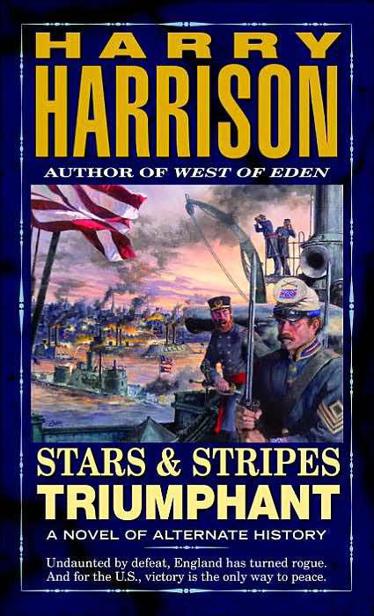 A VOYAGE FRAUGHT WITH DANGER

INTO THE LION'S LAIR

IN THE ENEMY'S HEARTLAND

A CONVOY IN DANGER

THE WINDS OF WAR

THE SWORD IS DRAWN

A CLASH IN PARLIAMENT

DAWN OF A NEW AGE

THUNDER BEYOND THE HORIZON

DAWN OF A NEW DAY

The threat of war, and war itself, has plagued my presidency of these United States of America ever since my inauguration. Instead of a peaceful handing over of presidential power, a continuation of the rule of law with which this country is blessed, it has proved to have been an administration of strife. The dissension began even before my tenancy of the White House, when the Southern states attempted to break their bond with the Federal Union and organize a confederacy. Once this new alliance had fired on the Federal troops in FortSumter the die was cast. War was inevitable. There was no way to return to the path of peace. Thus began the Civil War in America that pitted brother against brother in deadly battle. I hesitate to think what the outcome would have been had these hostilities been allowed to run their course; surely it would have meant a nation sundered and brave men dead by the thousands. That is what would have happened in the very least. At worst it would surely have meant a national catastrophe, the destruction of this country as we know it.

But fate intervened. What began as a small incident, the capture of the British mail packet
Trent
by the American warship the USS
San Jacinto,
was inflated, blown up out of all proportion by the British government. As president, I would have been happy to release the two Confederate ministers who were taken from the
Trent
had the British government, Lord Palmerston and Queen Victoria in particular, shown any understanding of our position. Despite all of our efforts at peacemaking, they persisted in their intransigence. My government could not, would not, give in to threats and imprecations at the highest level issued by a foreign power. While we in America worked for a peaceful solution to our national differences, they appeared to want nothing less than a headlong confrontation. While my government was locked in battle with the Southern secessionists, we still had to deal with this militant foreign power.

Alas, international peace was not to be. Defying all logic, the forces of the mighty British Empire invaded this sovereign land.

The world knows what happened next. With our nation threatened from the outside, the Civil War, the battle between our government and the seceding states, was ended. The result was that a reunited United States fought back against these invaders, the common enemy. It was not an easy war—none are—but in the end the strength of our common cause was such that the invaders were repulsed and hurled back from our shores. Disheartened by our victories, the enemy was sent packing as well from Canada, when that nation declared its liberty from colonial rule.

Throughout this war I learned to depend on General William Tecumseh Sherman to fight and to win. He was respected and admired by our Northern troops, and it became a matter of the greatest importance that the officers of the Southern army regarded him highly as well. They appreciated his knowledge and attitude toward the South, as well as his warrior skills—respected the man so well that they were willing to serve under him in the battle against our common enemy.

Finally that invasion and war was ended and we were at peace. Or were we? Unhappily this was not to be the end of our struggle. The Lion of the British Empire had lost battles before—but had never lost a war. Try as hard as they could, it appeared that the British simply could not swallow this defeat. Despite all attempts at sweet reason upon our part, they persisted in their bellicosity to the extent that they attempted another invasion of our country, this time through the war-torn land of Mexico.

My generals, now more experienced and wise in the ways of war, devised a counterplan to contain this threat. Instead of our armies being bogged down in a war of attrition on our borders, it was decided to take the war closer to the enemy shores. Thus the American invasion of Ireland began. The proposed enemy invasion from Mexico was quickly terminated as the British realized that their forces were needed closer to home.

I am proud to say that not only did our forces prevail against the enemy in Ireland, but in fact succeeded in liberating that much-stricken nation.

I pray that this national rivalry between our two great countries will now end. These last months my mind has been occupied with domestic matters, not international concerns. During the past August of the year 1864, the Democratic National Congress nominated Judah P. Benjamin as their presidential candidate: a worthy man, without whose unstinting aid peace and reconciliation in the South would not have been attained. It was my pleasure to be nominated by the Republican Party for a second term, with Andrew Johnston of Tennessee standing for vice-president at my side.

It was a hard-fought election. I regret to say that my name is still anathema in parts of the South and the voters there voted
against
me rather than for the Democratic candidate for president. However, the soldiers—both those recently discharged and those still in the service—looked upon me as their commander in chief, and their votes carried the day.

But that is in the past. I began my second term in March of this year, 1865. Now it is May and WashingtonCity was never more beautiful, with green leaves and blossoms everywhere. America wishes only peace in the world, but has perhaps become too used to war during the past four years. To provide weapons for our armies and iron ships for our fleets, a growing and successful manufacturing economy has evolved, one that we never knew before in peacetime.

I would be the happiest man in the world if I could preside peacefully over this prosperous land, to oversee that our cannons of war were beaten into the plowshares of peace. Where our native manufacturing genius has succeeded in wartime, it could surely succeed as well in a time of peace.

But will peace prevail? Our British cousins remain bellicose. They still take affront at being expelled from Ireland, after all their centuries of rule. They will not face the fact that they are gone from that green island, and gone for good. Their politicians still make warlike speeches and rattle their sabers in their scabbards. To counter this British exercise in ill will, our politicians are now busy on the European continent seeking trade agreements and attempting to strengthen our peaceful ties.

Will peace and sanity prevail? Can another disastrous war be averted?

I can only pray with all my strength that it will.

The floor-to-ceiling windows were open to the warm sunshine, admitting the background hum of the busy Belgian capital. They also admitted the effluvia of horse manure, a smell unnoticed by anyone who had dwelled for any time in a large city. President Abraham Lincoln was seated on an ornate Louis XV couch, reading the document that Ambassador Pierce had just given him. He looked up when there was a tap on the hall door.

"I'll see who it is, Mr. President," Pierce said. He strutted a bit when he walked; this was his first political appointment and he was immensely proud of it. He had been a Wall Street banker, an old business associate of Lincoln's from the same law firm, until the President had nominated him for this position. Secretly he knew that he had been selected more for his knowledge of French, and his intimacy with international commerce, than for any political skills. Nevertheless it was still quite an honor. He held the door wide so that the two general officers could come in. Lincoln looked over the tops of his reading glasses and acknowledged their salutes.

"Sashes, swords, and ribbons, gentlemen, as well as festoons of gold braid. We are quite elegant today."

"Seemed appropriate for this morning's presentation at court," General Sherman said. "We were just informed about it."

"As was I," Lincoln said. "I was also told that it was most important, and was told as well that they particularly requested that you and General Grant be present."

"Did they say why, sir?" Grant asked.

"Not directly. But Pierce here, who has made many important contacts since his appointment, took a senior Belgian civil servant aside and managed to elicit from him the fact that the presentation of some honors would be involved."

"They will surely be a fine sight," Pierce said. "It seems that the smaller the country, the bigger the medals are. And I was assured by the same official that the past war between our country and the British would not be involved in this presentation. It seems that Queen Victoria is very touchy on that subject, and King Leopold, who, after all, is her favorite uncle and constant correspondent, has no desire to offend her on that score. The awards will be for heroic actions that you gentlemen engaged in during our recent civil war."

Grant smiled as he peered down at the plain blue cloth of his infantryman's uniform. "It could do with a bit of smartening up."

They all looked up as Gustavus Fox, the Assistant Secretary of the Navy, let himself in through a connecting door. He was a man who kept a very low public profile; only at the very highest levels of government was it known that he headed America's secret service. He nodded at them and held up a sheaf of papers.

"I hope that I am not interrupting, but is there time for a briefing, Mr. President?" he asked. "Some new and urgent information has just been made known to me."

Ambassador Pierce grunted slightly as he pulled his fob watch from the pocket in his well-rounded waistcoat. "More than enough time, I do believe. The carriages are not due to arrive here until noon."

"I hope that with a bit of luck you are bringing me some good news, Gus," the President said hopefully. "There never seems to be much of that."

"Well, I am forced to admit that it is somewhat of a mixed bag, sir. Firstly, just two nights ago the British raided the harbor at the port of Kingstown in Ireland. This is the ferry port that is quite close to Dublin. They landed troops, and the attackers burned the city hall, as well as some of the harbor installations, then finished it all off by seizing and setting fire to some ships that were tied up there. The Irish believe that it was a terror raid, pure and simple, since it accomplished nothing but wanton destruction. It apparently was a clear reminder to the Irish that the British are still out there. As they left they exchanged shots with an Irish revenue cutter, but retreated back to sea before the troops from Dublin could arrive."

The Secret in Their Eyes by Eduardo Sacheri
A Broken Christmas by Claire Ashgrove
Church of Sin (The Ether Book 1) by James Costall
El río de los muertos by Margaret Weis & Tracy Hickman
Awakening on Orbis by P. J. Haarsma
The Shockwave Rider by John Brunner
Please Remember This by Seidel, Kathleen Gilles
Look After You by Matthews, Elena
A Witch in Time by Nora Lee
The Shore by Todd Strasser