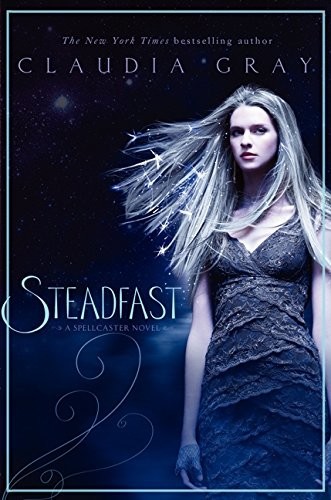 NEARLY EVERY GRAVESTONE IN THE CEMETERY OF
Captive’s Sound made a promise about forever.

The tombstones said things like
Remembered Evermore
or
Always In Our Hearts
. But for all those promises of unending devotion, nobody seemed to visit very often.

Today, though, three people had arrived.

Nadia Caldani stood directly under the cast-iron gate, which bent into curves to imitate leaves, roses, and thorns. Nothing about her wine-red sweater or dark jeans betrayed the most important secret Nadia had: that she was a witch—young and only half-trained, but more powerful than she’d once believed.

Her thick black hair was gathered back into a ponytail, which revealed the bruise on her temple and the small cuts along one cheek. Less than thirty-six hours before, she’d fought the darkest magic she knew of—wielded by Elizabeth, a sorceress, a servant of the One Beneath. Somehow, against all odds, Nadia had won. She knew she should feel elated. And yet fear still flickered inside her, a fire that wouldn’t quite go out.

I got lucky,
she thought.
But at least Elizabeth’s gone, and we can start picking up the pieces.

Next to her stood Mateo Perez, letter jacket slung over the black T-shirt and jeans he’d have to wear for his shift at the restaurant later. Nadia knew he’d always thought of himself as an outsider in Captive’s Sound, isolated by the curse that followed his family. For a long time, he’d believed he had only one true friend—but that had only been Elizabeth playing games with his mind. Elizabeth had used him, and the curse, for her own purposes.

Nadia had been able to show Mateo what Elizabeth really was. More important, she’d discovered who he really was: someone strong enough to bear the curse. Someone who could serve as her Steadfast, the person who could amplify the strength of her witchcraft. Someone who now could
see
magic at work in the world, both light and dark. She had known within weeks that she needed him beside her, always. They’d kissed for the first time only days before; she felt like she could taste that kiss, feel his lips against hers, every moment.

We have time now,
she thought as he looked sideways at Nadia.
All the time in the world. So today isn’t about us. It’s about Verlaine.

Verlaine Laughton leaned against the gate, trying to catch her breath. Her pale hand clung to the cast-iron leaves; around her wrist dangled the white plastic bracelet she’d worn in the hospital and hadn’t cut off yet. Though her dads had protested her going out with her friends so soon after being discharged, she’d convinced them she needed it. “Sunshine,” she’d said. “Fresh air.” That sounded healthy, right?

Now she was about to walk to her parents’ graves for the first time in far too long. Through Nadia’s magic, and maybe Mateo’s abilities as her Steadfast, Verlaine would learn whether their deaths had been caused by dark magic—whether every sorrow in her lonely life, all the way from being orphaned as a baby to having silver-gray hair at age seventeen, was a result of a spell Elizabeth had cast.

Elizabeth’s gone forever,
Verlaine told herself.
I can’t get back at her now no matter what. There’s nothing we can do to reverse the spell now that Elizabeth’s dead. So what good does it do to find out?

Nadia put her hand on Verlaine’s shoulder. “Are you okay?”

“Yeah.” Verlaine straightened to her full height—several inches taller than Nadia, even a couple above Mateo. “I’m fine.”

“All right. Come on.” Nadia put her arm around Verlaine, and that human contact helped her feel better.

Nadia had said that the magical resonance around Verlaine was old, going back very nearly to the beginning of her life. If Elizabeth had been responsible for the spell, they would be unable to break it—now that Elizabeth was dead.

It wasn’t an absolute barrier. Her family, who had loved her from infancy and thus before the spell, still cared deeply for her. And there had been moments during the past few weeks when other, stronger magical forces had temporarily canceled out the effect of whatever it was that had been done to Verlaine—when she felt like her friends truly cared for her.

Those moments were fleeting, however. Even now, Verlaine knew Nadia was here mostly out of a sense of obligation; when her eyes met Mateo’s, she saw the same sense of guilt. It wasn’t their fault any more than it was Verlaine’s. The magic was to blame.

Even if the curse is forever, I want the truth. Just so I know what I’m dealing with, instead of always wondering why.

They walked slowly along the rocky path that outlined the graveyard. Captive’s Sound had clung to this craggy, joyless bit of the Rhode Island coastline since colonial times; several of the tombstones were centuries old, blackened with age, the once-deep carved letters worn to mere scratches by rain and time. The chill of the November wind was sharpened by the salt air as it sent gold leaves skittering past their feet and caught at Verlaine’s long, gray hair.

Captive’s Sound was somehow fundamentally sick. Rotten at the core, Nadia thought, from all the dark magic that had been worked here over the centuries by Elizabeth Pike. She’d hoped Elizabeth’s death might have begun to heal the town. But the trees were still stark and too small, the light more watery and less bright.

Then again, it was only November 2.
Give it time to heal,
Nadia reminded herself.

Verlaine stopped short, her Converse sneakers kicking up dust on the path. “There. My parents are over there.”

She pointed at a still-smooth granite block, one of the long tombstones that bracketed dual graves. Nadia helped lead her toward them. She noticed Mateo taking care not to step on any place where a dead person might lie. From some people that would only have been superstition; from Mateo, she knew, it was a sign of respect.

Finally they were at the foot of the graves, looking at an epitaph that read:
Richard and Maisie Laughton, beloved children, loving parents.

Gone from us too soon.

“They don’t have any flowers.” Verlaine’s voice was small. “I used to want to bring them when I was little, but it always made Uncle Dave cry. He was close to my mom; he said she was his best friend, always. Coming here hurt him so much that I quit asking. But now they haven’t had flowers for years and years.”

“It’s okay,” Mateo said. “They know you still love them.”

“Do they? We proved magic exists, and witches exist, and also crazy-ass sorceresses who sit near you in chemistry class, but we don’t know anything about heaven, last I checked.” Verlaine wiped at her face, though she wasn’t crying; it was as though she was trying to focus herself, Nadia thought. “Or is that in your Book of Shadows, Nadia? Proof that there’s an afterlife?”

“Nope. That’s as mysterious to you as it is to me.” Nadia decided the best way to comfort Verlaine at this point was to stay focused on the task at hand. “Verlaine, I want you to go stand between the two graves.”

The effect was immediate. Verlaine steadied just at the thought of having something constructive to do. “Up by the gravestone? Or does it matter?”

“It doesn’t, but there might be some, uh, physical impact. So standing farther back is good.” She glanced over her shoulder. “Getting a little distance is a good idea for you, too, Mateo.”

He smiled at her, and it was one of those moments where it hit her all over again—how somehow this wonderful guy had come into her life exactly when she was trying to shut everyone out. Mateo had beaten down the doors. Burned the fences. Picked the lock on the gate. “Distance,” he said. “Got it. You don’t need a Steadfast for this?”

“I always need my Steadfast,” Nadia said softly. “But you’ll be more than close enough.”

Verlaine positioned herself between her parents’ graves, a strange look on her face as she gazed down at the place where her mother lay. Her usual vintage look was less polished today, but she’d put on acid-washed jeans and a poufy white sweater for an eighties vibe. All Nadia could think was how pale and thin she looked. Like a ghost among the graves. “Here?”

“That works.” Nadia lifted her hand and took hold of her wrist—specifically, the quartz charm that dangled from her bracelet. The bracelet wasn’t just a piece of jewelry; it was her way of keeping the primal elements she needed for her witchcraft close at every moment.

But the elements alone weren’t the magic. They only grounded Nadia, made her ready. For magic, she needed the spell.

For revealing magic done long ago:

Those were the ingredients. Now, to give them power. Nadia closed her eyes and thought of the deepest, most emotionally resonant memories that fulfilled each—

Standing with Mateo in the Halloween carnival fire, aware the house was about to collapse around them, facing Elizabeth’s magic and fighting back with her own.

“It’s better this way,” Mom said at the doorway, suitcase in hand, not even looking Nadia directly in the face before she left her daughter behind forever.

Meeting Elizabeth’s eyes across the chemistry lab as one of Nadia’s spells went haywire, and Elizabeth’s mocking smile, her utter lack of surprise, revealing that she was another witch—but horribly, undoubtedly, a Sorceress.

Nadia opened her eyes to see a bottle-green mist drifting around them—centered on the graves, and on Verlaine. A soft sound rustled through the air, like silk on silk. Verlaine’s long, silver hair began to drift around her, as though she were underwater.

“Stay very still.” Nadia held up one hand as a warning. Verlaine’s eyes went wide, but she didn’t move.

The mist swirled a little faster, then froze in place—literally. One moment it was vapor; the next moment, greenish crystals of ice sleeted down around them. Verlaine winced and covered her head as the ice rattled on her parents’ gravestones. It instantly melted, running through the carved letters to drip down onto the brownish grass below.

Nadia nodded. Mateo stepped closer to them, and when she turned toward him, what she already suspected was confirmed in his eyes.

“What did it look like to you?” she asked. Mateo, as her Steadfast, possessed a window into magic that even she could never match.

“Dark red metallic . . . streaks, I guess.” He struggled, obviously trying to find the right words. “Like they were raining down in this greenish mist.”

“We saw the mist, too. That was a freebie.” Verlaine walked toward them, her steps unsteady. Nadia wasn’t sure whether that was from the lingering effects of what Elizabeth had done to her last week or the emotions she had to be feeling. “So. Dark red. That’s old magic, right? What did the spell tell you, Nadia?”

Best to say it as quickly and cleanly as possible, Nadia decided. “It’s not just an echo of an old spell. Whatever spell this was—it was cast a long time ago, but it’s still at work. It’s linked to your parents’ deaths. It’s unquestionably dark magic. And”—the next was just Nadia’s judgment call, but she was certain—“yes, Elizabeth was the one responsible.”

Verlaine didn’t react at first. Her pale face remained almost expressionless, and except for her wind-tossed hair, she didn’t move.

Mateo took a step closer to her. “Verlaine? Are you okay?”

“I could at least have brought some flowers.” With that, Verlaine crossed her arms and let her head droop, drawing into herself.