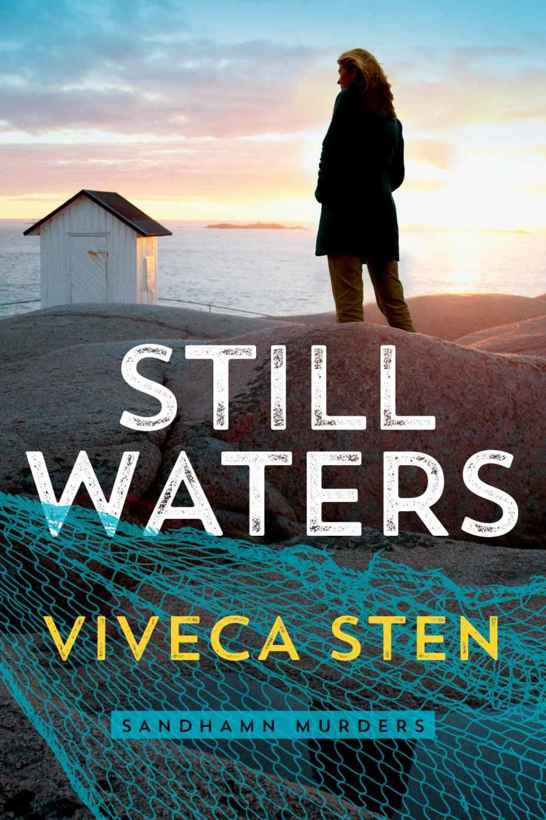 Previously published as
I de lugnaste vatten
by Forum in Sweden in 2008. Translated from Swedish by Marlaine Delargy. First published in English by AmazonCrossing in 2015.

Amazon, the Amazon logo, and AmazonCrossing are trademarks of
Amazon.com
, Inc., or its affiliates.

For my brave mother

A
BOUT THE
T
RANSLATOR

Everything was completely still and peaceful as only winter can be, when the archipelago belongs to those who live there, and the raucous summer visitors have not yet taken over the islands.

The water was dark and shining, the cold of winter lying heavily on the surface. Odd patches of snow rested on the rocks. A few mergansers stood out like dots against the sky, and the sun was low on the horizon.

Someone threw a tangle of rope out to him, and he rushed to loop it around his body in the ice-cold water.

“Pull me up,” he said, panting as he grasped the side of the boat with fingers that had already begun to stiffen from the cold.

When the anchor attached to the rope was thrown over the rail, he seemed more confused than anything, as if he didn’t understand that its weight would soon drag him to the bottom.

That he only had a few seconds left to live before his body followed the heavy lump of iron.

His hand breaking the surface of the water, tangled in the abandoned fishing net, was the last visible thing. The waters closed over it with an almost imperceptible sigh.

Then there was only the sound of the engine, as the boat turned to make its way back to the harbor.

The man gazed irritably at the dachshund as she ran down the beach; she had been cooped up on the boat for several days. He really should have kept her on the leash. Dogs were not allowed to run loose in the summer on Sandhamn, a small island in the Stockholm archipelago, but he didn’t have the heart to observe the rule when the little dog was so happy to run free.

Besides, there was hardly anybody in sight so early in the morning. Those living in the few houses along the shoreline had hardly woken up. The only sound came from the screaming gulls. The air was fresh and clear, the overnight rain had given everything a newly washed feel, and the sun was already warm, promising another glorious day.

The sand was tightly packed and pleasant to walk on. The low-growing pines gave way to ryegrass and wormwood, mixed with clusters of yellow flowers. Tangled heaps of seaweed had washed up at the water’s edge, and over toward Falkenskär a single yacht could be seen traveling east.

Where had that damn dog gone?

He followed her barking. Pixie was yapping, her little tail wagging from side to side. She was standing by a rock sniffing at something, but he couldn’t see what it was. He went over to have a look, noticing an unpleasant smell. As he got closer it turned into a sour, suffocating miasma.

On the ground lay something that looked like a bundle of old rags.

He bent down to shoo the dog away and realized it was an old fishing net full of seaweed. Suddenly he understood what he was seeing.

The fishing net ended in two bare feet, both of which were missing several toes. Only bones protruded from what was left of the shriveled, greenish skin.

Before he could stop himself, his stomach turned inside out. A surge of pink vomit poured out and splashed his shoes.

When he was able to stand upright again, he used a little seawater to sluice out his mouth. Then he got out his cell phone and called the police.

Inspector Thomas Andreasson was really looking forward to his vacation—four weeks in his summer cottage on the island of Harö in the Stockholm archipelago. Morning dips in the sea. Paddling his kayak. Barbecues. Trips to Sandhamn to visit his godson.

Thomas liked to take his vacations late in the year; the water was warmer, and the weather was usually better. But right now, just after midsummer, it was difficult not to long for an escape from the city, to be out among the islands.

Ever since he had started working with the violent crime unit in Nacka Municipality the previous year, he’d had his hands full. There was an enormous amount to learn, despite the fact that he had been on the police force for fourteen years, the last eight with the maritime police.

During that time, he had sailed most of the boats used by the maritime police, from the CB90 to Skerfe boats and RIBs. He knew the archipelago like the back of his hand. He knew exactly where the unmarked reefs were and which shallows were particularly dangerous at low tide.

As a maritime police officer he had seen a great deal and heard many fantastic explanations as to why certain individuals sailed their boats as they did, especially when it came to owners who’d had too much to drink.

He’d handled everything from stolen boats and vandalism to lost foreigners and runaway teenagers. The local population used to complain that people were fishing illegally in private waters. There wasn’t much the maritime police could do about that, other than turn a blind eye when the owner of the waters took the intruders’ nets and kept them as compensation.

On the whole he had been very happy with his job, and if it hadn’t been for the fact that little Emily was on the way, he would have probably never considered applying for a post in the city.

Afterward, when it had all been for nothing, he hadn’t had the strength to move. He had barely managed to live through each day.

But life on the police force in Nacka was intense and fast-paced, and he found himself surprisingly at home, even if he sometimes—particularly during the summer—found himself longing for the freedom of island life.

Margit Grankvist, his colleague and a considerably more experienced officer, peeked her head into the office and interrupted his thoughts.

“Thomas, come and see the old man with me. They’ve found a body on Sandhamn.”

The old man was the head of criminal investigation in Nacka, Detective Chief Inspector Göran Persson. He shared the prime minister’s name, a fact he didn’t appreciate in the slightest. He was quick to point out that his political views did not correspond with those of the prime minister. He was not, however, prepared to expound on those views. He had a somewhat portly figure, similar to that of the prime minister, and displayed a distinct lack of enthusiasm for all the comparisons.

He was an old-school officer, a man of few words, but he created a good atmosphere and was valued by his colleagues. He was conscientious and knowledgeable, and had a great deal of experience.

When Thomas walked into Persson’s office, Margit was already sitting there with her ever-present cup of coffee. The department’s coffeemaker produced a liquid that was positively toxic. How Margit could knock it back in such quantities was a mystery. Thomas had switched to drinking tea for the first time in his life because of it.

“The dead body of a male has been found on the northwest beach on Sandhamn,” said Persson. “Evidently the body is in bad shape; it’s been in the water for quite some time.”

Margit made a note on her pad before looking up. “Who found it?”

“Some poor sailor. Apparently he’s really shaken up. It wasn’t a pretty sight. He contacted us about an hour ago, just before seven this morning. He was out walking his dog when he stumbled across the body.”

“Any suspicion of murder?” asked Thomas, taking out his own notebook. “Any signs of abuse or violence?”

“Too early to say. Apparently the body was entangled in some kind of fishing net. Anyway, the maritime police are on their way to investigate, and they’ve organized transport to bring the body in.”

Persson looked at Thomas. “I seem to remember. Do you still have that house on Harö? That’s next to Sandhamn, isn’t it?”

Thomas nodded. “It takes about ten to fifteen minutes to travel between the islands.”

“Excellent. Local knowledge. I’d like you to go over to Sandhamn and take a look, maybe say hello to your old colleagues.”

A cunning smile played on the DCI’s lips.

“Is there any indication we should be opening a murder investigation?” asked Thomas, glancing at his boss.

“For the time being it’s being treated as an unexplained death. If it turns into a murder investigation, Margit will lead it, but for now I think you can take care of it.”

“Suits me,” said Margit. “I’m up to here with all the reports that have to be in before my vacation. You carry on!” She nodded for emphasis. It was obvious that the countdown to the holidays had begun. Just a few more days of paperwork, then freedom beckoned in the form of a rented cottage on the west coast and four weeks with her family.

Persson looked at the clock. “I’ve been in touch with the police helicopter. They’re still in town, so they can pick you and the technicians up in twenty minutes. You just need to get to the helipad at Slussen. You can get a lift back with the maritime police. Or take the Waxholmsbolaget ferry,” he said with a grin.

“Fine by me,” said Thomas. “You’re welcome to talk me into a helicopter ride any day.”

Persson got to his feet, indicating the briefing was over. “That’s settled, then. Come and see me when you get back so I can get a status report.” He stopped in the doorway, scratching his chin. “Play things down a bit out there, Thomas. It’s the height of tourist season. We don’t want a load of hysterical visitors and journalists getting ideas. You know what the tabloids are like. They’d love to swap their tired old summer standby of sex tips for speculation about a murder in the archipelago.”

“You’ll do a great job. Give me a call if you have any questions. And remember not to come to any conclusions until forensics have had their say.”

Thomas pulled on the leather jacket he always wore, irrespective of the weather.

“Do you think the helicopter could drop me off on Harö when we’re done?” he asked in passing on his way out.

“Of course. If the official government plane could fly Thomas Bodström to Greece for his summer holiday, I’m sure the Stockholm Police can fly Thomas Andreasson out to his summer cottage.”

The
DCI
grinned at his own wit.

Margit shook her head but couldn’t help smiling. “Talk later. Say hello to the islands for me.”

Belle Pearl by Arianne Richmonde
The Rat Collector: A Dystopian Thriller (Age of End Book 1) by Chris Yee
Butterfly Cove by Christina Skye
To Be the Best by Barbara Taylor Bradford
The Copy by Grant Boshoff
Dark Reservations by John Fortunato
The Girls of August by Anne Rivers Siddons
A Dark and Brooding Gentleman by Margaret McPhee
Beast of Burden by Ray Banks
Brunswick Gardens by Anne Perry