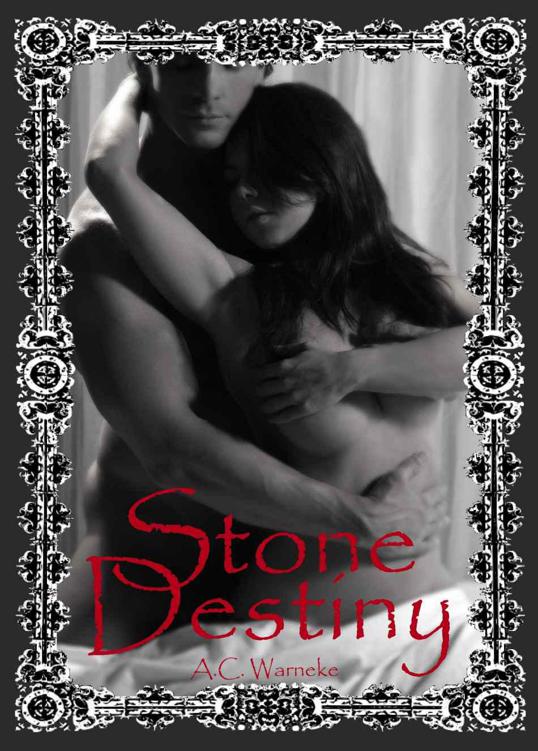 Stone Destiny exists because of the readers who wanted Armand's story. This book is for you, with my love and gratitude.

To my children who are growing up way too fast and to my husband: I love you!!

To the members of the U.S. Military:

Thank you for all that you do.

Armand has not always been easy… okay, he's never been easy, and I want to thank everyone for their support while waiting for Stone Destiny.

I also owe a huge debt of gratitude to those who read Stone Destiny in its unfinished state, from the Gargoyle Virgins to the Gargoyle Lovers. Thank you for letting me see the story through your eyes.

The Stone Passions Trilogy begins with Vaughn and Melanie in
Stone Lover
: Melanie has always been a little different, able to see things that others cannot. She falls in love with Vaughn, a man who becomes a Gargoyle when she sun rises.

Rhys and Jenna's story is
Stone Romance
: Melanie's sister Jenna has experienced great sorrow
in her life. Rhys is the gargoyle who brings love, laughter, and passion back into her life.

Stone Destiny is Armand's story. It has been fifteen years since the events of
Stone Lover
and
Stone Romance
. The veil between the two worlds has fallen and Armand Nosuntres no longer knows his purpose: he is a Guardian with nothing left to
guard. As he struggles with his new reality he is unaware that his destiny lies with the woman who loves him unconditionally, who has always loved him: Ferris Jacobs.

A human raised in the world of magic, Ferris has never really fit in. Her best friend is an imp, her playmates are pixies, and she's in love with a stubborn gargoyle who is having a difficult time seeing her as a grown woman. But she has a plan and before she is through Armand isn't going to know what hit him.

In an attempt to protect the vibrant Ferris from her own folly, Armand makes a decision that dramatically changes everything, sending Ferris on a journey that she never expected but one that she ultimately had to take.

As passions explode and lovers are torn apart, Armand and Ferris have to find their way back to one another before fate spins out of control and destroy everything in its path.

Stone Destiny is the thrilling conclusion to the Stone Passions trilogy.

With a heavy sigh, Ferris Jacobs made her way through the elegant lobby, waving half-heartedly at Nod the lavender
-haired sprite as she passed. Slinking into the elevator, she pressed the button for the fourteenth floor of the castle hidden in plain sight in the middle of Saint Paul. She wanted to escape her so-called real life for a while because it had been another day of Hell in high school and she wasn’t sure how she was going to survive one and a half more years of it. She would have thought that her classmates would have grown up by now, maybe matured some. Unfortunately, she wasn’t so lucky and her classmates remained immature and cruel.

Her life beyond the walls of the castle sucked
. She hated being the girl that everyone avoided. Well, everyone that was human. The creatures of the supernatural world adored her, just as she adored them. Yet it was because of her ability to see things that weren’t supposed to be there that alienated her peers. It wasn’t her fault the rest of the hairless apes couldn’t see beneath the veil so why did they have to torture her because of it? Even after she learned not to speak of it they continued taunting her, calling her Freaky Ferris for as long as she could remember.

The
more they tormented her, the deeper she sank into the lives of her paranormal friends, from the imps that teased her and got her into trouble to the pixies that entertained her with ribald stories probably not suitable for young ears. Of course, her favorite supernatural beings were the gargoyles that lived in the castle in the middle of the city. From the time she was five or six they had been a part of her life, ever since her Aunt Melanie had fallen in love with the gargoyle Vaughn and her mother had fallen in love with Vaughn’s gargoyle brother Rhys.

Ferris had grown up surrounded by magic, by mythological creatures and fantastical castles that the rest of the world couldn’t even fathom. Hell, her best friend was an imp named
Ajreis, whose wide mouth full of sharp teeth, grayish skin and large, pointy ears had never frightened her, even as a small child. He made her feel safe while storms raged outside, he made her laugh when the kids at school had pretended she didn’t exist, he comforted her when she hid her tears from her mother because she never wanted her mom to worry. He guarded her with his life.

But he couldn’t protect her from the verbal slings and arrows of her classmates
. He could only comfort her after the fact, promising deadly retribution until she laughed, promising painful vengeance until she worried he might be serious and begged him to take no action. Unfortunately, he was currently spending some time with his imp brethren who were giving him a hard time for having a human friend. It left Ferris alone to face the wolves at school for the rest of the school year. Her aunt, her mother and their mates had gone to Greece for a supernatural festival, taking the three gargoyles that had returned home with Rhys and Jenna nearly ten years before.

Vaughn and Rhys’s older brother Armand remained behind so the castle would not have to remain unguarded. Ferris knew that he was looking forward to some peace and quiet, especially after dealing with the boisterous trio of young gargoyles
. There was also Vaughn and Aunt Melanie’s nine year old son, a golden-haired angel who had a small case of hero worship for the stern Armand. Young Alex had gone with his parents in order to meet his gargoyle relatives and his paternal grandmother, who happened to be Medusa.

What was even crazier was that the gargoyles’ father was the sun god Apollo, whom Ferris had only heard stories about since he had decided to hang out in Mount Olympus for the past ten years. Still, Ferris would have loved to have gone on the trip to Greece
. She would have given her left arm to meet the mythical beauty, the Greek gargoyles and the other mythological creatures. But she had school and was forced to remain behind.

Yet another reason why school sucked.

The elevator lurched to a stop and the doors opened onto the fourteenth floor, the home of the gargoyles
, the lair of the Guardians. Already she could feel the calming effects of being surrounded by magic. She could breathe freely once more. Her lips started to curve upwards when she paused, the sound of music was wafting through the air. It was haunting and so damned beautiful that the rest of the world ceased to exist.

Easing her backpack to the ground, she quietly made her way through the elaborate suite of rooms, her home when her mom was in town, until she reached the conservatory at the back of the building. Armand was sitting at the piano, his long, elegant fingers moving effortlessly over the keys, producing music that was almost too beautiful to bear and Ferris felt the tears welling in her eyes. His eyes were closed as he played, lost in the music.

Silently, she made her way to the loveseat that faced the piano and sat down, enthralled by the sight of Armand at the piano. He was easily the most stunning man she had ever known, either in real life or the movies. With the looks of a fallen angel, he was simply breathtaking. His hair was blacker than black, short and thick, and he had the most amazing jade green eyes she had ever seen, harsh in their aloof beauty. His hewn jaw was softened only slightly by a set of lips that were sensuous and cruel. His body was carved of marble, with muscles that were sleek and hard over a frame that was tall and strong. He was over five hundred years old but he looked to be in his early twenties, maybe twenty-four or five.

When
he smiled, he had the most heart-stopping smile, made all the more so by its rarity.

Over the years they had developed an odd rela
tionship, a friendship of sorts, one that she thrust upon him from the time she was a child and followed him around talking his ear off. Eventually, almost reluctantly, he came around and started talking back. Despite the age difference there was a bond between them that she cherished above all else and she enjoyed the rare times that they were able to relax and be themselves and just talk. She could tell him things that she couldn’t tell her mother and he would understand, offering a shoulder to lean on when everything at school was crumbling to dust.

She never wanted to burden her mom with her trials because she didn’t want Jenna to ever think she had made the wrong choice by choosing to be with a gargoyle. In Ferris’s eyes, having her mom fall in love with a gargoyle had been the best thing that ever happened to either of them. She could tolerate the ignorant teasing of her classmates because the world that existed beneath the veil was worth paying any price to be a part of. Besides, outside of school she was extremely happy and Armand was a large reason why.

He showed her a side of him that she knew he didn’t let anyone else see, probably not even his brothers. She doubted he was even aware of it since his words and tone could sometimes be caustic. That was simply Armand, trying to keep everyone at a distance but unable to not comfort a soul that was crying out in pain. From the very beginning she had seen beneath the surface to the heart of the man, with all of his coldness and frozen glares he was warm, passionate. Lonely.

As he finished playing and the last note hung in the air, he bent his head forward and took a deep breath. Without opening his eyes, he murmured, “Ferris, what are you doing here? Don’t you usually stay with your grandparents when your mother and aunt are away?”

She should have known that he was aware of her presence
, he probably knew the exact moment she had entered the building. As a Guardian he didn’t miss anything. With a sigh, she sank deeper into her seat and admitted, “I couldn’t go there today so I drove around until the sun went down and came here. I didn't think you'd be home."