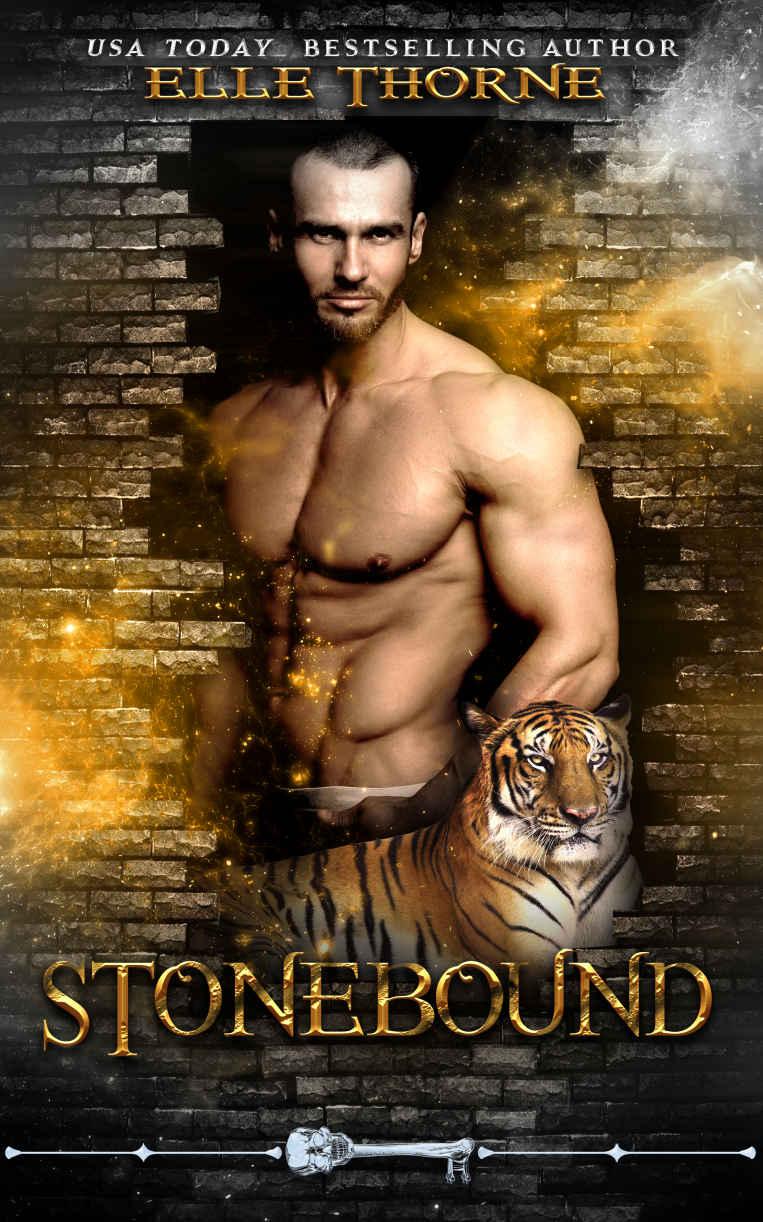 T
hank you for reading
!

T
o receive
exclusive updates from Elle Thorne and to be the first to get your hands on the next release, please sign up for her mailing list.

Born out of wedlock, Cristiano Ricoletti is the son of a millionaire lion shifter and a one-night stand. He was kept a secret until the he learned who his father was and decided to claim his heritage.

Capriana Valenti—Ana—is Isabel Tiero’s sister. A stunning orange tigress shifter she’s trapped in a situation she can’t escape. Until she learns her prison is nothing compared to Cristiano’s.

She turns to a legend for help. The legend provides her with one irreversible solution.

Yeah, you know who Cristiano is… Theo’s half-brother!

I
f you can’t click
, just put this in your browser:

T
ino
—born Cristiano—son of Ella Carrera, Italy’s most famous opera singer, took long strides down the streets of Rome. He was oblivious to the admiring glances of others, this handsome, chiseled-faced man with a strapping chest and muscular arms.

He was a man on a mission, and not the most pleasant of missions. If Tino could have had his way, he’d have stayed sunk into a state of solitude and avoided people.

Not that he minded people. Not at all.

But he was grieving, and grief was something he preferred to handle privately.

He took a deep breath, his chest expanding, the fabric straining, then he released the air with a long whoosh.

Then back home. Back to his studio, back to sculpting.

He pulled on the heavy door, stepped inside the plush office building, where dimness and the scent of cinnamon greeted him.

The lady at the front desk, hair pulled back in a severe bun that was offset by stark red lipstick in a pale face nodded to him, and reached for a button.

Tino knew the button would send a signal and that seconds later he would find himself in the company of one of his mother’s lawyers.

Sure enough, a door opened less than a moment later and an elegantly dressed, black-suited, pinstriped, white haired man stepped out. A man Tino knew well enough, considering he was a regular attendee at Tino’s mother’s performances.

He indicated the door he’d just come out of. Tino stepped into the office of his mother’s lawyers.

He was here for the reading of the will.

What’s the purpose of that? I’m her only child.

It was a formality he could have done without. He’d have preferred to stay at his mother’s other villa in Florence and worked, or moped, he’d rather not have come to Rome.

She was more than his mother. She was his best friend. She understood him, stood by him, raised him, educated him.

In a time when many women married just to provide security or a home for their children, his mother chose to go it alone.

“Thank you, Roberto. It’s the world’s loss, though her memory will live on with her many fans.”

“True enough.” Roberto ushered him into his private suites, whispered to his secretary to bring cappuccinos and biscotti, and closed the door behind them.

“Why did I have leave Florence to be here for this? Couldn’t it have been handled without me?”

“Special instructions from your mother. She wanted you to read the letter here.”

Letter? I thought I was here for the will.

“One for your eyes only.”

“It’s sealed, son.” Roberto had called him son since Tino was a young boy.

It was weird hearing a man calling him son, one that wasn’t actually his father.

Roberto held up a cream colored envelope with Tino’s name on it. Not his nickname. His given name.

There was no last name on the envelope.

He recognized his mother’s elegant handwriting, but didn’t reach for the envelope yet.

“How long ago did she give it to you?

“Where are the other letters?”

“She took them with her.” Roberto pushed the envelope toward him, nodded encouragingly. “Read.”

“The conditions were that you read it here.”

Frustration ate at Tino. “Or else?” He didn’t want to read the letter. It seemed that nothing good could come of something like this.

Roberto sighed, his forehead creased with a slight frown. “Please.”

Tino reached across the desk, plucked the letter from Roberto’s waiting fingertips. Roberto dropped his hand immediately, then as if it was an afterthought, took a letter opener from an organizer and slid it across the sleek mahogany desktop.

“Thank you.” He slid the burnished metal tip under the envelope’s seal and dragged it across the length of the envelope, and withdrew the trifold papers within.

He glanced at Roberto, who was studying him.

“More like something I mentioned to Ella. That I’d look after you.”

“I think I can handle this.” Tino kept his tone even. He knew that Roberto was in love with his mother. He also knew Roberto would go to extremes his mother wouldn’t have expected.

Roberto nodded and left the room, closing the door behind him with a soft click.

A
na
—born Capriana Valenti—held her breath as she eavesdropped at the door. The doctors were in there, and she could tell from the way they were talking that whatever they were saying to her mother wasn’t good.

The sounds of soft sobs came from the thin door. They were followed by sounds of comfort being given.

She knew her mother’s sobs. She’d heard them before. So clearly the doctors were comforting her.

But Ana didn’t need the doctors to tell her what was wrong. Ana was a tigress shifter. Her tigress had already sensed that her father didn’t have long to live.

Ana startled, then whirled to face her sister Isabel. “Jesus. Could you be quiet?”

“Why? So you can get away with eavesdropping and not get caught?”

Isabel gave her a scalding look, put her hand on the knob and turned it. She took one step in the room, then turned around, grabbed Ana’s hand and pulled her in with her.

Ana tugged backward, but it was too late, Isabel had caught her off-guard and they were already several paces in the room.

“Girls.” Their mother was at their father’s bedside. She put her finger over her lips and gave them a warning look. “
Silencio.”

Her father lay on the bed, his eyes closed, the sheet pulled up to his chest, his hands and arms, veiny, emaciated thin, by his side on top of the sheet.

Pain ripped through Ana. Her father, the once robust and amazing man who’d had the largest hands and had tossed a giggling Isabel up in the air and caught her, while next to him Ana had begged to be the next thrown in the air.

Gone was the vibrant man of last year. In the sickbed of her father’s room was a husk of the man he used to be. She cast her gaze away. It was too painful to see her father like this. To know that it was destroying her wheelchair bound mother.

She didn’t pay attention to the doctors, she’d seen them there many times before. They’d been a common occurrence since her father took sick. But there was someone else in the room.

Tall. Brutally, cruelly handsome, with a gleam in his eyes that made her want to hide. Or run. Probably run.

Ana had heard that name. Her father had mentioned him before, but she couldn’t remember the context of what her father had said about the tall, broad shouldered man.

An image of slug’s trail on the garden’s stones on a spring day came to Ana’s mind. She pushed the image away and fought the urge to squirm from his scrutiny, while at the same time, she fumed at his blatant sexual innuendos and at this intrusion on her father’s time.

“My papa is a sick man. You’re here on business?” She kept her voice deliberately cold.

“Your father asked me to come.” He smirked and leaned closer to Ana. “You’ll belong to me one day.” His words were spoken low. His eyes glazed over with lust. “Mine. To do with as I please.” Again the thick tongue made an appearance.

Ana looked away, disgusted. She wanted to slap the smug expression from his face.

“It’s true,
cara mia.”
Her father’s weak voice came from the bed. His eyes were barely open, slits that didn’t seem to be able to focus. “I’m glad you’re here. I’m worried about your mother, Isabel and you. Bruno will help.”

Bruno nodded. His eyes were focused on Ana’s breasts way too intensely.

She shifted from foot to foot, fighting yet another urge—to vomit.

“How will he help, exactly?” Isabel’s tone was just as cold as Ana’s had been.

Neither of the sisters had ever liked Bruno, from the first time he stopped by their house for business with Papa. His lascivious glances and covert lewd assertions made them shudder.

They hid upstairs in their rooms as soon as they heard his raucous laughter coming from the front hallway.

“Your father has offered your hand in marriage in exchange for the financial and emotional security of your family.” Bruno was looking directly at Ana when he said that.

California Woman (Daughters of the Whirlwind Book 1) by Daniel Knapp
Legends From the End of Time by Michael Moorcock, Tom Canty
Held by Edeet Ravel
No Love for the Wicked by Powell, Megan
Alive and Alone by W. R. Benton
Death Takes a Honeymoon by Deborah Donnelly
When You Don't See Me by Timothy James Beck
Saving Brigit by Francis Drake
The Widow by Anne Stuart
TimeRiders 05 - Gates of Rome by Alex Scarrow