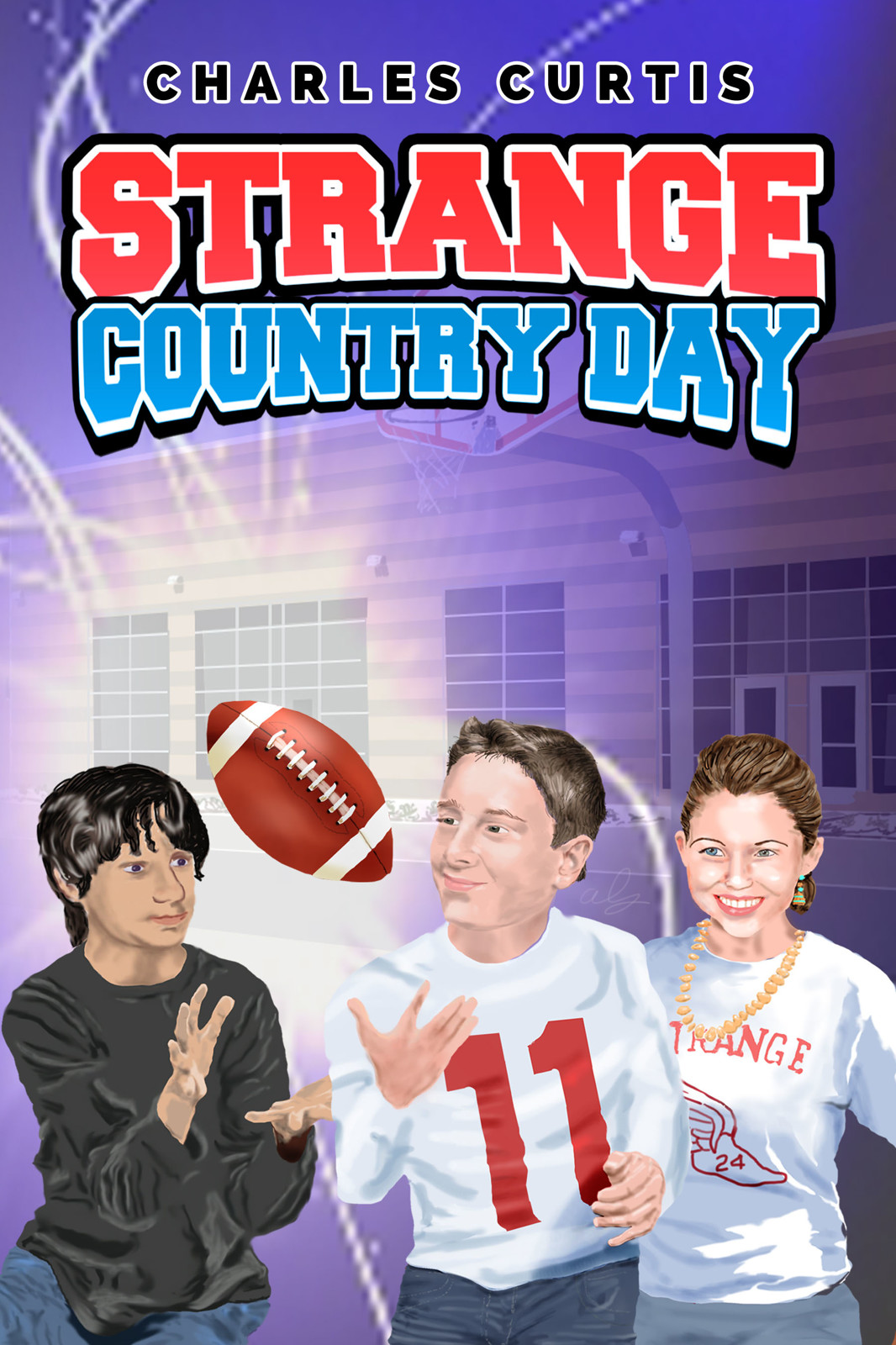 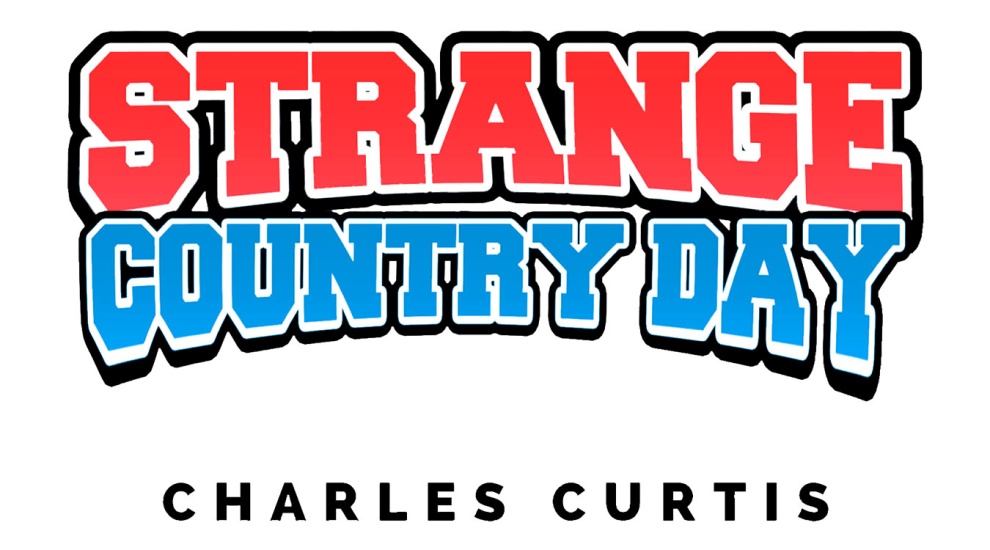 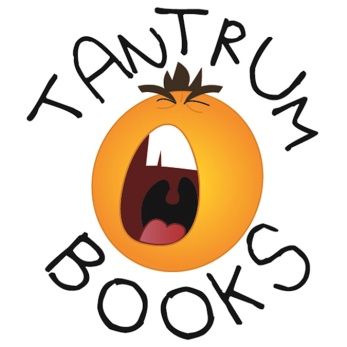 Published by Tantrum Books for Month9Books

To Erica and Benji

You always hope your first day of school is uneventful. You lay low, you blend into the background, and you make it through without doing something that’ll get you tormented for an entire year.

That didn’t happen in my first few hours at Strange Country Day.

Here’s what did happen: just as I was about to be demolished by an elephant-sized bully named Flab, some superhuman power possessed me and I bloodied his nose. Another new kid named Dex escaped an ancient initiation ceremony by clambering up a bookcase like a mountain goat. That night, I played catch with a football-hurling robot.

That was Day One. A week later, I started crushing on the prettiest girl I’d ever seen.

Wait. I’m getting ahead of myself. Let’s start from the beginning:

I stood at the front gates to Vance M. Strange Country Day School, staring up at the name of my new school, the letters set high above a set of iron bars that looked as if they had been there for centuries. The curlicues and script looked just as ancient.

It was Orientation Day, so I wouldn’t have to sit through any classes until tomorrow. After a tour given by an upperclassman, my new prep school brought the seventh graders to our state-of-the-art auditorium, where we listened to the headmaster lecture all 110 of us about Strange Country Day’s policies. It’s exactly what you’d expect—no gum in class, no graffiti, no lateness. But there were also some weird ones, like the ten-page booklet on “uniform violations.”

Oh, the uniforms. I couldn’t believe my parents made me go to a school with a strict dress code. I looked down at what I was wearing and winced: a button-down white shirt with a yellow tie—not a clip-on, so we had to learn to tie a Double Windsor knot, whatever that was—that felt like it was choking me. I also sported tight khakis and brown, shiny loafers. The whole thing wouldn’t be complete without the navy blazer with the school emblem, a griffin—the mythological lion with wings—and words displayed below “Vance M. Strange Country Day School, est. 1904” above the front gate:
In Via Incipit Hic.

I used my phone to look up the meaning: “The Road Starts Here” in Latin. My new school was some rich kids’ academy past presidents had attended, where future Wall Street barons first learned the quadratic equation and where I’d now start myself on the supposed road to greatness.

That road was real—it weaved through the gigantic campus. The school consisted of a dozen ivy-covered buildings spread out over a campus that spanned what looked like miles. Walking from the art building to where I was supposed to take history would take at least ten minutes, or so our tour guide warned us. I could see different trees planted everywhere with plaques describing them and what seemed like acres of neatly trimmed grass. My old school back home had been one small, cramped brick building with a slab of concrete out back that we played on during recess.

With the half-day orientation over, we headed for the front gate, where the buses would pick us up. I looked at the other kids in their uniforms and saw them joking around and greeting each other with complex handshakes, as if they were a basketball team after a playoff win. I heard nearly everyone entering seventh grade had graduated from Strange Lower School, so they all knew each other already. I wanted to introduce myself to someone, just so I wouldn’t feel awkward, but they passed me as if I were invisible. I turned back around to confront those iron gates, realizing that they were a jail from which I couldn’t escape.

I felt a heavy hand on my shoulder. I turned around to look up at a big kid wearing a maroon and yellow jacket with a giant version of the griffin on it. I could see a jersey with the number 77 underneath.

“Come with me—with them,” he said, pointing at a group of seventh grade boys.

We were led down a walkway, ushered inside one of the buildings and into a classroom. When the big guy opened the creaky windowless door, I saw most of my other male classmates. They all had the same fear written on their faces. We were surrounded by bigger guys—ninth graders, probably. Some of them were football players. A few more kids were squeezed in, and the “guards” shut the door. In front of the room, standing over us, was another player in a maroon and yellow jacket. He was the biggest guy in the room, hefty, but you could see it wasn’t all fat.

“Welcome to Fresh Meet Friday!” the enormous kid announced. The other ninth graders whooped and hollered. “Boys, since you’re about to join the Strange brotherhood, you can call me what everyone calls me: Flab.” That’s the worst name I’ve ever heard for someone that size.

“This is all about tradition, boys. Strange Country Day is filled with tradition. For starters, you are standing in the oldest building on campus, built in 1904. Three years later, this tradition began right here in the Roger Basil Thayer Room.” Strange alumni donated heaps of cash to have a room, a library desk, a water fountain, anything, named after them.

“Here’s how this works: you will stand in front of the room and pledge allegiance to Strange Country Day. Only then will we tell you the next step.” Flab paused for dramatic effect, and his classmates asked, almost in unison, “And what’s that?”

We seventh graders exchanged looks but stayed silent. Flab explained the rules of the mysterious tradition: in exchange for our participation, they would agree to stay out of our way the rest of the year. Violations of this pact would result in punishment to the violator(s) and random acts against other classmates throughout the school year. We were not allowed to breathe a word of this to our parents, teachers, advisors, bus drivers, or otherwise at school. “We went through the same thing you’re about to go through, and not one of us retaliated,” he said as the mob nodded approval. One of the other ninth-graders interjected and pointed out that he’d heard of a kid decades ago who rebelled.

“And he had to transfer two months later.”

“Fight back and you’re fighting against Strange’s hundred years of tradition,” Flab finished with a grin. He picked up a book from the nearby desk and opened it. “Let’s start with … ” he trailed his chubby fingers over the pages. My heart nearly leapt through my crisp white shirt. “ … Dex Harrison.”

The seventh-grader sea parted, and a kid emerged who looked to be about five feet tall. His skin was pale, an almost grayish color, and his pointy ears appeared to be higher up on the sides of his head than usual. His eyes were like slits. I never saw anyone who looked like that. There were some snickers among my classmates as he walked slowly to the front of the room. He stood there, surrounded by four ninth graders.

“Dex, do you swear to uphold the traditions, honor, and virtue that those before you have also sworn to defend?” Flab recited.

A barely audible, high-pitched “Yes” came out of Dex’s mouth. He scrunched up his eyes. “You have now joined the brotherhood of Strange Country Day,” Flab said, as he leaned back to watch the action.

As the quartet of ninth-graders began to move toward him, Dex jumped away. They tried stepping closer, but Dex kept backing away. The entire room, seventh and ninth graders alike, gasped. Some of us started laughing.

“Shut up!” Flab yelled. He slammed his fist down on the desk and marched over to Dex. “Don’t make this harder on yourself. You took the vow; you have to fulfill it.”

Flab and the others reached out to grab him, but Dex somehow eluded their grasps. He backed away as some of the seventh graders began to root him on. The others yelled for Dex to stop, knowing we would all suffer if he messed up the tradition. The noise in the classroom got louder. Dex backed into a bookcase filled with dusty volumes; he looked like he was about to be trapped. Just as Flab was ready to pounce on him, Dex darted up the bookcase with lightning speed. The roar was huge.

Dex had a weird way of celebrating his victory—he bared a set of sharp teeth and hissed at his pursuers, who grabbed books off the shelves and threw them at him. With incredible dexterity, he dodged every one of them, repeatedly displaying his spiky teeth at the ninth graders. That brought the room to a fever pitch.

The Raid: an Eden short story by Taylor, Keary
Killing Cupid (A Jaine Austen Mystery) by Levine, Laura
The Good Thief's Guide to Vegas by Chris Ewan
The Changeling by Kenzaburo Oe
The Queen of Patpong by Timothy Hallinan
A Good Man Is Hard to Find and Other Stories by Flannery O'Connor
WITHOUT YOU (STRIPPED) by Skye, Brooklyn
The Burning Sky by Jack Ludlow
Jessica and Sharon by Cd Reiss
Island of Legends (The Unwanteds) by Lisa McMann