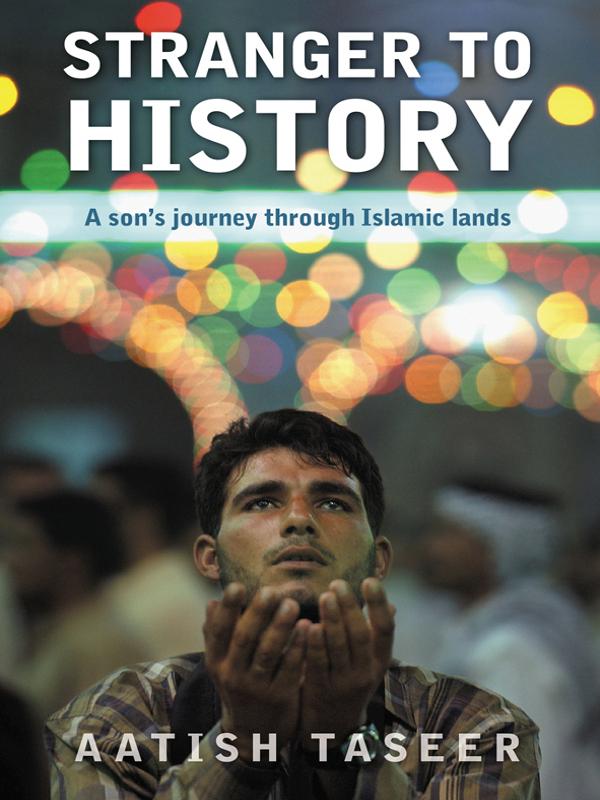 Aatish Taseer was born in 1980 and has worked
as a reporter for
Time
magazine. He lives between
London and Delhi. This is his first book.

A son’s journey through Islamic lands

Stranger to history: a son’s journey through Islamic lands/Aatish Taseer.

The Tyranny of Trifles

The Discplinary (
sic
) Force of the
Islamic Republic

O
nce the car had driven away, and we were half-naked specks on the marble plaza, Hani said, ‘I’ll read and you repeat after me.’ His dark, strong face concentrated on the page and the Arabic words flowed out.

Kareem, pale with light eyes, and handsome, also muttered the words. We stood close to each other in our pilgrims’ clothes – two white towels, one round the waist, the other across the torso, leaving the right shoulder bare.

‘I seek refuge in Allah the Great, in His Honourable Face and His Ancient Authority from the accursed Satan. Allah, open for me the doors of Your Mercy.’

It was a clear, mild night and we were standing outside the Grand Mosque in Mecca. The plaza was vast, open and powerfully floodlit. The pilgrims were piebald dots, gliding across its marble surface. The congested city, the Mecca of hotels and dormitories, lay behind us.

The mosque’s slim-pillared entrance, with frilled arches and two great minarets, lay ahead. It was made of an ashen stone with streaks of white; its balustrades, its minarets and its lights were white. A layer of white light hung over the entire complex. Towers, some unfinished with overhanging cranes, vanished into an inky night sky.

We paused, taking in the plaza’s scale.

I was mid-point in a much longer journey. I had set out six months earlier in the hope of understanding my deep estrangement from my father: what had seemed personal at first had since shown itself to contain deeper religious and historical currents. And it was to discover their meaning that I travelled from Istanbul, on one edge of the Islamic world, through Syria, to Mecca at the centre and the Grand Mosque itself. The remaining half of my journey was to take me through Iran and, finally, into Pakistan, my father’s country.

We walked on like tiny figures in an architect’s drawing towards the mosque. The plaza’s white dazzle and my awe at its scale had made me lose the prayer’s thread. Hani now repeated it for me slowly, and I returned the unfamiliar words one by one. My two Saudi companions, experienced in the rituals we were to perform, took seriously their role as guides. They seemed to become solemn and protective as we neared the mosque’s entrance. Hani took charge, briefing me on the rites and leading the way. Kareem would sometimes further clarify the meaning of an Arabic word, sometimes slip in a joke. ‘Now, no flat-screen TVs and electronics,’ he warned, of the prayer we would say inside the sanctum.

We were channelled into a steady stream near the entrance. The pilgrims, who had been sparse on the plaza, gathered close together as we entered. The women were not in the seamless clothes required of the men, but fully covered in white and black robes. Inside, the mosque felt like a stadium. There were metal detectors, signs in foreign languages, others with letters and numbers on them. Large, low lanterns hung from the ceilings, casting a bright, artificial light over the passage. On our left and right, there were row after row of colonnades, a warren of wraparound prayer galleries. The mosque was not filled to even a fraction of its capacity, and its scale and emptiness made it feel deserted. Then, Hani whispered to me the prayer that was to be said around the Kaba. The Kaba! I had forgotten about it. It hovered now, black and cuboid, at the end of the passage. And once again, confronted with an arresting vision, Hani’s whispered prayer was lost on me.

The Kaba’s black stone was concave, set in what looked like a silver casque, and embedded in one corner of the building. It had been given by the angel Gabriel to Ishmael, the progenitor of the Arab race, when he was building the Kaba with his father, Abraham. Many queued to touch it and kiss its smooth dark surface. We saluted it and began the first of seven circumambulations. Hani read as we walked and I repeated after him. After every cycle, we saluted the stone, and said, ‘God is Great.’

The pilgrims immediately in front of us were three young men in a mild ecstasy. They had their arms round each other and skipped through their circuits. The language they spoke gave them away as south Indians. They overlapped us many times and their joy at being in Mecca was infectious. Behind us, a man who seemed Pakistani moved at a much slower pace, pushing his old mother in a wheelchair round the Kaba. She was frail and listless, her eyes vacant: she had saved their fading light for the sacred house in Mecca. Then another overlapper hurried past in an effeminate manner, flashed us a bitter smile, and hastened on.

The vast array of humanity at the mosque, their long journeys encoded in the languages they spoke and the races they represented, brought a domiciliary aspect to the mosque’s courtyard. People napped, sat in groups with their families, prayed and read the Book. The hour was late, but no one seemed to notice; this, after all, was the destination of destinations.

When we had circled the Kaba seven times, we moved out of the path of orbiting pilgrims and prayed together. Behind the double-storey colonnades and their many domes, there were brightly lit minarets and skyscrapers. I felt as if I was in a park in the middle of a heaving modern city.

We had rushed things. We sat next to each other, a little sweaty now, at one end of the courtyard. Kareem, prolonging the prayer, sat on his shins. His handsome face, normally bright with an ironic smile, was quiet and closed. Hani’s eyes were closed too, his dark lips moving silently. A moment later we rose for the last rite: Hagar’s search for water.

There are many versions of the story, but the key facts are that Hagar, Abraham’s wife, is stranded with the infant Ishmael in the vicinity of Mecca. She runs seven times between Mounts Safa and Marwa until an angel appears to her. He stamps on the ground and water springs up – where the ZamZam well is – to quench the thirst of mother and child. It was Hagar’s steps, her fear and deliverance, a sign of God watching over Muslims, that we were to retrace.

Hani led us out of the courtyard and into a separate part of the mosque. On the way, we stopped at Abraham’s feet, gold-plated and in a case. We gazed at them; Hani murmured the prayer that is said at the station of Abraham. We continued towards a long, enclosed walkway. Rectangular pillars at even intervals seemed to make an infinite reflection, like two mirrors facing each other, down the corridor’s length. A metal railing ran down the centre, separating those who were going from Mt. Marwa to Mt. Safa, re-created in brown paint and concrete at either end of the walkway, from those who were returning. There was a stretch in the middle, marked out by two green lights, where Hagar’s distress had been at its highest. We were obliged to cover this distance at a run. It made the pilgrims sweaty and the air was heavy. On one side of the corridor, there were grilles that let in the cooler night air and on the other it was possible to see the vastness of the mosque, its many floors, with escalators running between them, and black men in blue clothes cleaning the building.

At one point on the run, which was long and exhausting, I caught sight of the Kaba in its courtyard. It possessed the place. Thousands stood in tight circles around it, but they seemed hardly to fill the giant courtyard. I tried to gauge the building’s size, but it defied assessment. And this was part of its mystery, like the near invisible, black-on-black calligraphy, woven into the silk covering its solid masonry.

The Kaba could not disappoint because it was nothing. Its utter poverty expressed cosmic contempt for the things of the world. It was solid, mute, no triumph of architecture and virtually impenetrable, more like a rent in the sky than a monument. So silent and unrevealing a sanctum was this, that it implied faith, rewarding the believer with nothing, as if faith itself was the reward, and mosaic ceilings and tiled domes, mere trifles.

This thought of faith seemed to lead into what happened next. A fellow pilgrim approached us at the end of our run. He was dark, with a pointed face and a curt manner. He addressed me in Arabic. I didn’t understand so he turned to Hani and Kareem. They nodded and walked on without a word.

‘He said, “This is the House of God. You will receive divine merit if you make him take those off,”’ Hani explained, pointing to the religious strings round my neck and wrists.

I couldn’t even remember where the strings were from. Some were from temples, others from Muslim shrines. ‘Tell him they’re from a Sufi shrine,’ I said defensively.

Faith was the reward at the sacred house, and faith would have answered the objection the pilgrim had raised, but I had come faithless to Mecca. And justly, I was found out.

M
y earliest sense of being Muslim was bound to my earliest perception of my father’s absence; it could almost be said that it was a twin birth in which one superseded the other.

It was midsummer at my aunt’s house, a Lutyens Delhi bungalow, on a wide road lined with
neem
trees. Their fruit, fat green berries, fell everywhere. They lay on the large lawn in front of the house and on the long shallow steps leading up to the pillared veranda; they even made their way into the house on the backs of huge black colonial ants.

I was five, maybe six. My mother was a journalist and used to go away on assignments. When she did, I was sent to spend afternoons and sometimes nights at my cousins’ house. My aunt had married the heir of a rich Sikh family and the house was always full of his nephews and nieces, who also lived in big houses on similar wide roads with
neem
berries and fat ants. I lived with my mother, another aunt and my grandparents in a small house past several roundabouts and a flyover that separated the Delhi of white bungalows and
neem
trees from the post-independence Delhi of colonies.