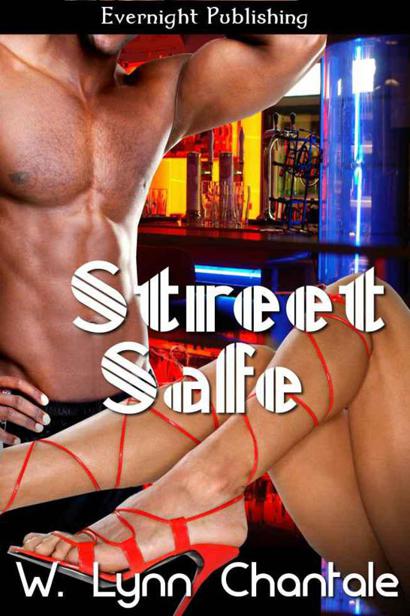 WARNING:
The unauthorized reproduction or distribution of this copyrighted work is illegal. No part of this book may be used or reproduced electronically or in print without written permission, except in the case of brief quotations embodied in reviews.

I would like to take a moment to thank my editor, Thank you for all your hard work. This is for my sister, Aleisha. Everyone should have a sister like you, but I’m glad you’re mine. I love you and thanks.

Also this book is dedicated in loving memory to Kenneth Ayers. You are gone, but not forgotten.

As always I thank God for blessing me with this talent.

She entered the bar wearing a pair of red ‘fuck me’ shoes and lipstick to match. Rue “Street” Callan paused in mixing a martini to follow her progress across the room. There was something familiar about this voluptuous woman. Lust simmered in his veins as he contemplated where he’d seen her. Laughter and the blare of a football game faded as the sway of her curvy hips mesmerized him. Something in the seductive undulation of her body led him to think she would be more trouble than he wanted, but grabbing a handful of her curvaceous ass would be worth every inconvenience.

Street held his breath as she turned her head, exposing the smooth column of her throat to his hungry exploration. The woman was pure temptation and the very way she moved made him think of a slow ride and hot sex. He longed to slide his tongue along the expanse of flesh, and farther downward until he could tease the swell of her breasts.

The sleeveless black dress she wore hugged the firm globes. Though smaller than he liked, his hands ached to hold the soft weight in his palms. His cock twitched and throbbed in painful anticipation.

He wanted to taste her, knowing she would be sweet and exotic like a ripe mango or juicy fig. And her legs…

For a moment he stared. He couldn’t help it. Her legs alone were a fantasy worth pursuing. Shapely, smooth, milk chocolate legs he could imagine wrapped around his waist, while her stiletto clad feet kept him nice and snug in her hot entrance.

He allowed his gaze to linger on the skin just below the hemline of her thigh-hugging skirt. He wanted to shove the black material up to her waist and find the secrets she hid beneath. With great effort he tore his gaze from the heaven he knew he’d find between her legs. Oh, the things he wanted to do to her.

She leaned forward, and the ebony curtain of her hair cascaded across her face, leaving her features shrouded in mystery. Just as well. She wouldn’t want a man like him, broken and scarred. Still, a woman like that promised passion. But he couldn’t shake the notion that he knew her.

He couldn’t remember the last time a woman distracted him to the exclusion of all else. Well, there was one, his masseuse. The way her hands moved on his bum leg made him wish he could feel her gentle massage on his other appendages

“Yo Street, did ya get lost in the gin?” Miles Duncan, one of the regulars and local PD called out.

Street blinked, somehow managing to tear his gaze from the temptation of her body, and focused on the speaker.

“Maybe he’s thinking about the piece he tapped last night.” Derrick Johnson nudged Miles, before palming a handful of mixed nuts from the bowl in front of him.

Street strained the contents of the martini shaker into a chilled glass and garnished the drink with a couple of olives. “Don’t be crude.”

“Perhaps my dear nephew has forgotten how to mix a martini,” Auggie Callan said with a smirk.

“Or some pretty young thang just walked into his oh-so-discerning view,” Miles said.

Auggie spun on his stool and emitted a low whistle. “And there are a lot of pretty young thangs walking around tonight.”

Street chuckled. Leave it to his uncle to find what was most important in the exchange ... beautiful women.

“Well something had to grab your attention.” Miles insisted. He, too, swiveled in his chair.

With a shake of his head, Street thumped a whiskey down in front of Miles and mugs of pale ale in front of Auggie and Derrick. The martini was placed on a waiting tray.

“Don’t you have some place to be?” Street busied his hands with rinsing the silver drink shaker and wiping down the counter.

The three men exchanged glances and shrugged. “No.”

“I’m lookin’ for a hot little honey to spend the rest of the weekend with.” Auggie sipped his beer. “I sold the spa.”

“An outside buyer?” Street asked. The day spa his uncle ran sat nearly opposite Street’s Bar and Grill, and the spa was also where Street went twice a week to get a massage to help manage the pain in his leg. Hopefully the new owner would keep the shop the way it was, and with the same staff. He’d hate to lose his favorite masseuse. Just thinking about the woman’s soft hands on his leg made him long to feel her fingers wrapped around his...

“My assistant,” Auggie said. “That sweet tempting babe made me an offer I couldn’t refuse.”

Derrick leaned forward. “What she do, sleep with you?”

That earned chuckles from the men.

“That was the offer I made her and she politely shut me down. Although her sister was game and bit of a freak.”

Leave it to Auggie to find the one woman who wouldn’t be interested in his charms. Secretly Street applauded the unknown female for resisting the man’s sex appeal. Why a woman would find wavy brown hair, piercing blue eyes and dimples irresistible was beyond him. Even after they found out what a womanizer Auggie was, most women came back for more.

“...seriously. It was the right thing to do,” Auggie was saying. “Ever since I brought her onboard she’s been really good for business and the woman’s hand...”

Street tuned out the rest of the conversation. The last thing he wanted to hear was how good her hands were. From experience, he was well aware of each expert slide of her hands and grateful when she left him alone at the end of each session.

“Trecie didn’t show and that chick party is here.” Beau Somers grabbed a bottle of water.

“What?” Street furrowed his brow.

“Trecie’s not here to work the party,” he repeated. “Did you want me to cover it?”

Street studied the bar manager. Frustration wore deep lines into the man’s forehead while worry shadowed his brown eyes. Beau cast nervous glances at the men seated at the bar.

“I can handle the party.”

The other man shifted from side to side, drained the rest of his water, then threw the empty container away.

“Just fine.” Beau ran a shaky hand over his close-cropped black hair and disappeared from behind the bar.

Something was up with his bar manager. Street eyed the man’s fleeing back thoughtfully. Hopefully it wasn’t serious.

The machine whirred and spit out an order ticket. He ripped off the receipt then limped to the end of the counter, rubbing a spot high on his thigh. No matter how much he exercised or how much therapy he did, his leg hurt, but he was alive and could walk. That was all that really mattered. At least that’s what he told himself, night after night, when he went home to his empty apartment.

He scanned the crowd, unconsciously searching for the woman who’d sparked an ember of desire in his blood. Most Thursdays were well attended, but today people clogged the tables, the long bar and clustered near the large TVs on either end. The sudden downpour forced drinking age adults from the town’s fair into the bar for a quick pitcher and a plate of wings. Hopefully the success would continue through the coming weekend.

“You in the auction Saturday?” Every year the fair culminated in a charity auction. All the eligible bachelors or their skills were sold off to the highest bidder. Though his bar donated quite a bit, Street still refused to personally participate.

Street swung around to face Miles. “Don’t think so.” Yet, if he could find the sexy woman, he might be persuaded, especially if he could convince her to bid on him.

“C’mon man, Miles and I do this every year and haven’t been caught yet.”

“You saving yourself for someone special?” This was said with a chuckle.

If only. Street grabbed a canister of nuts from beneath the counter and filled the empty bowls on the bar.

“Oh, ya think the ladies don’t want ya ‘cause ya walk funny?” Auggie drained the rest of his beer. “Lay a little of that charm on ‘em and they won’t care.”

Street ground his teeth at the mention of his injury. Despite all the effort he made, he would forever walk with a limp. Yeah, just great. He replaced Auggie’s empty glass with a mug of coffee.

Derrick laughed. “Told you he was still touchy about his leg. Pour me a cup too, Street.”

Street turned to pour another mug of java and the hairs on the back of his neck stood on end. A warm, spicy floral scent teased his nostrils and tightened his groin. He inhaled appreciatively. God. A woman wearing perfume that provocative had to be just as alluring.

When he faced forward again, he barely stifled a groan. It was her. Full, luscious lips enticed him. Red was definitely her color. God he could just imagine her mouth wrapped around the length of him. His erection throbbed and strained against the crotch of his jeans in anticipation. For once he was thankful for wearing an apron and standing behind the counter.

Those lips curved into a siren’s smile and conjured steamy weekends in bed. He shoved the coffee in Miles’ general direction and ignored his friend’s chuckle.

Decadent perfection tilted her head to the side and the tantalizing silkiness of her hair cascaded over a bare shoulder. When he met her eyes, a brownish-green, he nearly stopped breathing. Her! Only one woman he knew had hazel eyes. Surely the temptress standing before him wasn’t his very own masseuse? God, he didn’t even recognize her, all dressed up and with places to go. He drifted his gaze from head to toe. Damn, baby girl should leave her work smock at home. And now he couldn’t remember her name.

“I’m sorry I know you’re busy, but we’re having a little trouble finding our bartender.” Her sultry voice reminded him of satin sheets and candlelight. If she wanted to haunt his fantasies, then he would definitely make them a reality. What did he have to do to get her in bed?

She arched a perfectly shaped brow. “For the bachelorette party?” She glanced around. “You seem pretty busy right here.”

He grinned. “I’ll get the first round started and then I’ll be at your beck and call. I’m Street, by the way.”

The Clayton Account by Bill Vidal
The Light of the World by Tara Brown
Have Your Cake and Vegan Too by Kris Holechek
Action Figures - Issue One: Secret Origins by Michael Bailey
The Part-Time Trader by Ryan Mallory
From a High Tower by Mercedes Lackey
License to Dill by Mary Ellen Hughes
Yoga for a Healthy Lower Back by Liz Owen
Crossover: Franchise Mtg. by Tijan
From a Town on the Hudson by Yuko Koyano