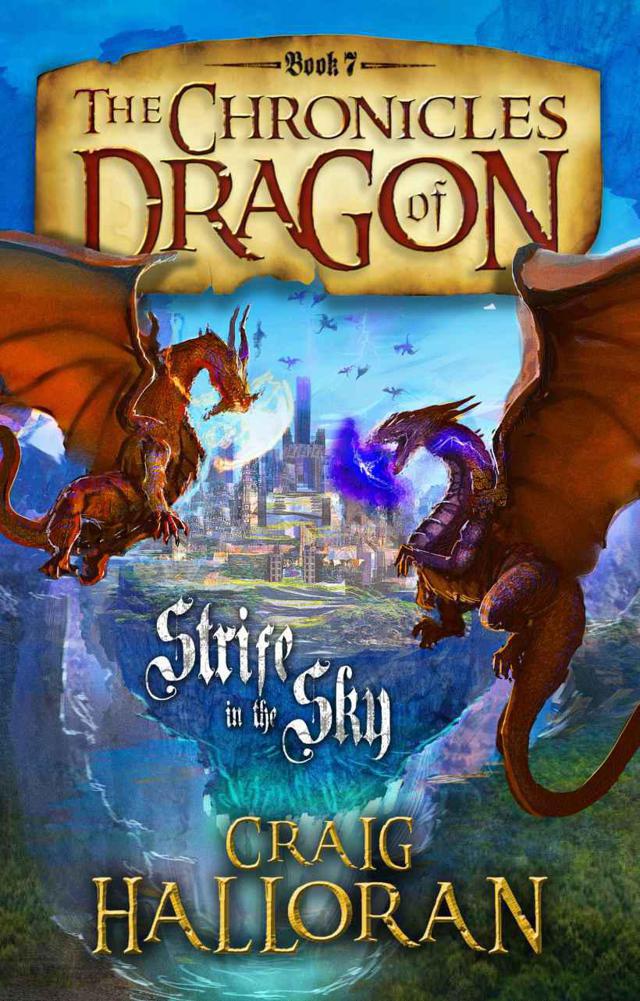 Strife in the Sky

The Chronicles of Dragon: Book 7

Strife in the Sky

The Chronicles of Dragon: Book 7

All rights reserved. No part of this publication may be reproduced, stored in a retrieval system or transmitted, in any form, or by any means, electronic, mechanical, recorded, photocopied, or otherwise, without the prior permission of the copyright owner, except by a reviewer who may quote brief passages in a review.

This book is a work of fiction. Names, characters, places, and incidents either are the product of the author’s imagination or are used fictitiously, and any resemblance to actual persons, living or dead, events, or locales is entirely coincidental. 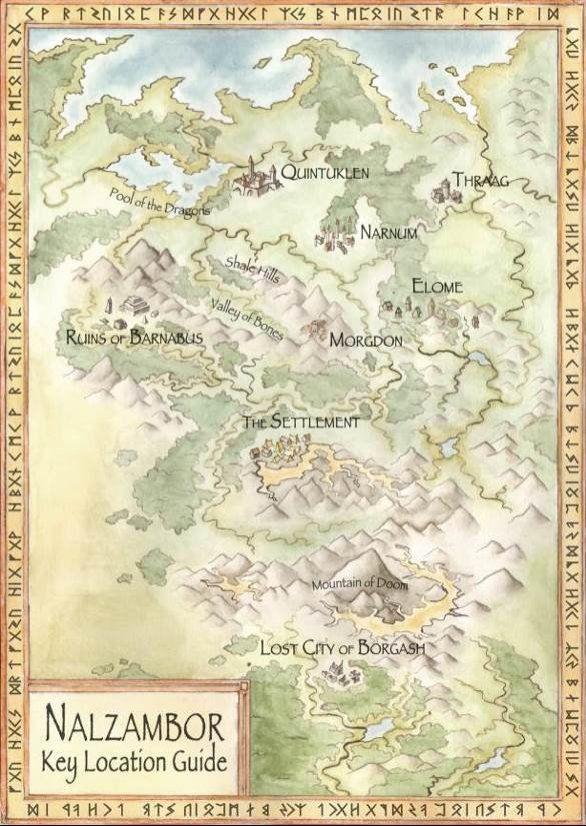 The Tower of Narnum was more than it appeared to be. After they led him out of Selene’s chambers, the draykis soldiers led Gorlee down the great tower’s stairs. At the bottom of the tower he caught a glimpse of the Free City. The markets. The banners. The unhappy faces on the normally robust people. It seemed only the orcs smiled out there.

It took almost an hour to walk down the steps, and Kryzak nudged him the entire way. He wasn’t sure if the draykis was just mean or if he held some sort of grudge against Nath Dragon. For whatever reason, it seemed personal.

“I’ve kept pace every step,” Gorlee said, shaking his shackled arms and legs. “Your pushes aren’t making me any faster.” He sniffed the air. “How about I buy you a meal, Kryzak? We’ll take some time and settle things. Perhaps you can fill me in on this place, The Deep, that you’ve been talking about.”

“We’ll have plenty of time to talk when we get down there,” Kryzak said. “Plenty of time. But enjoy the sounds, smells, and fresh air, Dragon.” He made a gruff snicker. “Things aren’t so pleasant in The Deep, and the food’s far from refined.”

Gorlee continued shuffling forward with the chains dragging on the floor.

“Oh, so there will be food then. That’s good news. Are the draykis cooking?”

A guard shoved a spear between his legs, making him tumble onto the tiles.

“Always talking,” Kryzak said, kicking him in the gut. “You talk too much.” He kicked Gorlee again. “Shut it.”

Gorlee rose to his feet with a groan. Things hurt, but he couldn’t let on. He was Nath Dragon now, with scales. Sort of. High Priestess Selene had said there would be another test for him to pass. She’d said she wasn’t convinced he was indeed Nath Dragon, and she’d hinted that the food he’d eaten might have some kind of effect.

“Will you quit with all the violence,” he said, eyeing Kryzak. “Such actions are beneath a Warrior Priest like yourself.”

“Everything is beneath me. Including scaly worms like yourself.” He shoved Gorlee. “The Deep awaits, Nath Dragon.”

Led by his escort, they traversed the lower plaza of the great tower. People were doing business there. All sorts. Food. Wine. Tapestry. Robes. Tools. Many of them eyed Gorlee and the group of soldiers, muttering and whispering but keeping to themselves. Gorlee could hear their haunting whispers though.

“Into The Deep he disappears.”

“His mind will be twisted in fears.”

“I hear their screams in the ground at night.”

Kryzak’s penetrating stare sent them away.

I need to run for it. I don’t want to know what this Deep is!

He glanced around. Women, men, children. He could mimic any of them. Mimic a child whose limbs were too small for the chains and slip away, blend in, and vanish. He had the strength for it. He slowed.

But he could feel Kryzak’s eyes still glued to him.

They don’t expect me to run. I gave myself up willingly. What to do? What to do?

One of the guards shoved him forward.

Kryzak grabbed him by his head of hair and jerked his chin back.

“Don’t get antsy around all of these people.” Kryzak pushed him onward. “But it happens when prisoners get their first look at The Deep.” He pushed Gorlee’s head in another direction.

A cone-shaped structure made of metal bars that crisscrossed in odd designs jutted from the ground. Several armored guards stood inside and outside of it. It was tall. Tall enough to reach the high point of the Plaza’s great vaulted ceiling, which was high enough for a giant to walk under. Gorlee felt a chilling breeze coming from the structure.

“Take a look around,” Kryzak said. “You won’t have this kind of atmosphere for quite a while.” He made a nod. A pair of guards unlocked the metal door and swung it open.

A strange howl filled Gorlee’s ears, coming from within the cage. He stepped closer and raised up on his toes. A black hole with a rock rim gaped in the center. The fine hairs on his neck stood up.

“And I thought that was you howling.” Gorlee laughed. “But the hole is just as big.”

Kryzak sneered and shoved him down.

Gorlee fell to his hands and knees.

This is it, Gorlee. Make a run for it, or you’ll have to play this out.
His mind raced. He was certain Selene had every intention of seeing him again. But had she done something to him?
What is this test?
He felt pixies fluttering in his stomach.
Is it in that hole, or is it in me? What if she discovers who I really am? Will she kill me? Let me rot in The Deep? I’m not ready to die yet.

“Quite the contrary. Dragons love caves. Certainly you know that, don’t you, Kryzak?”

“I’m not scared of anything. You know that.”
Sultans of Sulfur. There’s no turning back now.
There was a tight-knit group of draykis and guards around him. Even if he changed and confused them, it would be hard to make a break through them. They were armed and ready. He wasn’t.

I should have tried this move back there. I had a window. I blew it.

“And if you’d quit pushing me down, I’d be in The Deep by now.” He got up. “You know, Kryzak, I’m beginning to think you’ll miss my company. Is that it?” He walked inside the cone and stood along the rim of The Deep. It was pitch black, and the breeze was cold on his toes and neck. He shook his mane of hair and combed his fingers through it. “A nice touch.”

Smiling, Kryzak stepped over the rim and stood on the darkness.

“Impressive,” Gorlee said, raising a brow. “I guess it’s not as deep as I thought.”

The draykis grabbed Gorlee by the arms and legs and hurled him into The Deep.

Gorlee landed at Kryzak’s feet and slowly sank into the darkness.

What madness is this!

The travel was quiet. Peaceful. The sun peeked through now and again, only to be snuffed out by grey clouds. Bayzog kept his chin up and eyes alert, but his lids were heavy. His body ached and his mouth was sore.

I don’t want to ever engage in melee again.

The half-elf combed his hair behind his ears. His thoughts wandered to Sasha and his sons. He needed to know how they were doing. He wanted them to know that he was well. Alive, despite the efforts of some dragons and a troublesome gnoll. He cracked a smile.
I wonder if she’d ever believe I almost beat a gnoll in hand-to-hand combat.
He rubbed the polished wood of the Elderwood Staff.
Sort of.

Ahead, Nath led, following the tree line an arrow-shot away from the distant road. Bayzog had faith that Nath’s eyes could keep a lookout on things. Ben rode alongside Nath, chatting with him from time to time. It gave him some comfort. Sometimes Nath liked to be left alone, but at the moment he didn’t seem temperamental. But there was plenty about Nath that was unpredictable.

I wish Sasha were here. She has a way with him that we don’t.

Brenwar, who usually rode on Nath’s other side, drifted back on his horse. The chest was secured on the back of his mount. Bayzog was relieved to see it. His feelings weren’t the same for Brenwar, however. After all, he had knocked the dwarf from the sky a day earlier.

Brenwar grunted and eyed him with bushy brows.

“I only did what I felt I had to do,” Bayzog said, avoiding his eyes. “And I figured you to be every bit as hardy as you look.” He could hear Brenwar squeezing the leather of his reins. “And you don’t seem hurt, aside from your limp … Wasn’t that better than being carried away and dropped elsewhere?”

“Dwarven bones don’t break as easily as elven,” Brenwar said, taking his gaze away. “And…” He huffed. “And I’d have probably done the same. But only because you’re as light as a feather and would have drifted down in like fashion.”

“Aye, but never a truer remark.”

Bayzog sat up in his saddle and cracked a smile.

Brenwar added, “But don’t do it again.” He grunted. “You seem rattled. Would you like to peek into the chest? We’ve a ways to go yet, and it’ll ease your bones.”

The dwarf’s comment filled a void inside him. Bayzog always felt like an outsider. Odd. He wasn’t the warring type. Not a master of steel. Not a soldier in armor. It was difficult for him to relate to the others because he trusted in magic and they trusted in what they understood: metal.

Today however, it was different. He and Brenwar had been searching for Nath for years and even though there was a worthy degree of trust between them, this was the first time he felt Brenwar was not just an ally, but a friend.

“I’ve a feeling we’d better preserve our resources, but it’s a fine thing we have them.” He pulled back his shoulder. “And I’m sure the longer I stick with you, the more likely I’ll mend.”

Bayzog allowed a laugh but kept his eyes ahead on Nath.

“He killed that grey scaler without a weapon, Brenwar,” Bayzog said. “And he slapped another around like an orc.”

“Well, I think he slapped plenty of them around too. To death, it seems.”

“Let’s hope not,” Brenwar grunted. “But like you, it troubles me. That look in his eyes. The power in his voice. It reminds me of someone.”

Roman by Heather Grothaus
Bones Of Contention: The McKinnon Legends - The American Men Book 3 by James, Ranay
The Name of the Game is Death by Dan Marlowe
The Mage's Limits: Mages of Martir Book #2 by Timothy L. Cerepaka
After America: Get Ready for Armageddon by Mark Steyn
Time Skip by Craig L. Seymour
Glimmer by Vivi Anna
How to Eat a Cupcake by Meg Donohue
Gold Diggers by Tasmina Perry
Risking It All: London Calling Book Three by Kat Faitour