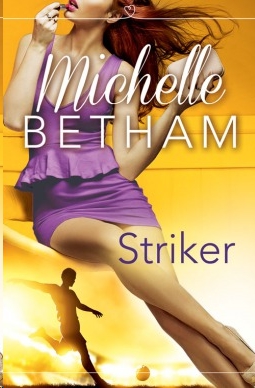 No part of this publication may be reproduced, distributed, or transmitted in any form, or by any means, without the prior permission of the author.

The story, characters and events in this book are a work of the author’s imagination, and are entirely fictional. Any resemblance to any person, places or actual events is purely coincidental.

See You At The Show

And the romantic comedies…

Too Much Trouble in
Paradise

Once again, I have to thank my wonderful husband for all the help he’s given me in getting this book published. Without him, it wouldn’t have seen the light of day!

Big thanks also go to a fabulous group of fellow independent authors over at Famous Five Plus. Their help, support and friendship is something I will never take for granted.

Huge thanks also go to Sunderland Football Club, who kindly allowed me to have a tiny snoop around their fantastic stadium – that really helped, and I’m forever grateful.

To whoever ‘The Secret Footballer’ is, thank you, too. Reading your book, ‘
I Am The Secret Footballer
’, gave me an insight into the world of professional football that we don’t normally get to see, and made me realise that, sometimes, things aren’t actually quite as far-fetched as we may think they are.

And, last but not least, I’m dedicating this book to all those people who’ve taken a chance on this indie author, bought my books, read them and, hopefully, enjoyed them. Just knowing that one person out there is waiting for your next book makes everything worthwhile. I’m so grateful to all of you. But a special mention must go to Nikki, Pam and Norma – their support and enthusiasm keeps me going, and I appreciate it more than they’ll ever know. Thank you.

‘Jesus! I’m home,’ Ryan sighed, pulling open the blinds of his hotel room to reveal a miserable, grey drizzle falling steadily from a gun-metal-grey August sky, the familiar sight of the Tyne Bridge looming large in the distance, reminding Ryan that he was, indeed, back home.

Downing a mouthful of coffee as he watched the morning rush-hour traffic cross that famous North East landmark, he felt a tinge of unfamiliar apprehension as he thought about what was to come. When people realised all the rumours were true they’d be expecting something akin to the return of the Prodigal Son, a homecoming hero; was he really going to be able to live up to all those expectations? Yeah. Of course he fucking was! What a ridiculous question.

Smiling to himself, he finished his coffee and turned away from the window, pulling off the white Egyptian cotton towel that was tied around his waist. He had one hell of a body – hard, toned and tanned thanks to a recent trip to
Marbella
followed by a pre-season tour of
California
. And hadn’t
that
been a blast? Who knew those American girls would be so into their soccer – as they called it over there. Or their soccer players? He probably had David Beckham to thank for that one.

He smiled again, checking out his naked reflection in the full-length mirror. Yeah. He was going to live off those American memories for a while, that was for sure. Not just because of the women, but because that had been the last time he’d played for a club he’d been a part of for over four years. But, in the world of football, you went where the money was, and right now the money was here, back in his native North East England.

Pulling on battered jeans, black t-shirt and expensive trainers, Ryan ran a hand through his short dark hair as he sat down on the edge of the huge king-size bed, watching the traffic steadily crossing the Tyne Bridge in what seemed like a constant, never-ending stream. He had a long day ahead of him – interviews, photo calls, not to mention moving into the house his new club had sorted out for him. Another roller-coaster of a ride was about to begin, and just because he was back up north, away from the bright lights of London and all the temptations
that
had thrown his way, none of which he’d declined, it didn’t mean that this chapter of his life was going to be any less crazy. Why would it be? Ryan Fisher had it all – money, talent, any woman he wanted. He had the lot. And he had no intention of letting go of any of it any time soon.

‘Ten-thirty, at Newcastle Red Star’s ground. Did you get that, Amber?’

Amber Sullivan looked at her boss. Shit! Had he just asked her something? Her mind had been temporarily distracted by the constant arrival of texts being sent to her phone regarding the ongoing rumours of Ryan Fisher making a return to the North East; only,
she
knew they weren’t rumours anymore.

‘Distracted, yeah. I got that. Just get your head together in time for this interview, okay? We’ve got an exclusive here. He isn’t speaking one-on-one to any other local news programme, so…’

‘Are we talking about Ryan Fisher here?’ Amber asked, swinging her chair round and crossing her long legs as her producer sat down on the edge of her desk, clasping his hands together on his lap.

‘Who else has just signed a record-breaking transfer deal with one of the biggest clubs in the region? Come on, Amber. I need you focused here. I’m sending
you
to interview him.’

‘Why me?’ Amber began rooting around in her desk drawer, looking for the Dictaphone she remembered throwing in there the other day after a particularly second-rate interview with a Durham cricketer who’d quite obviously been in no mood to talk sport but had been quite happy to make a move on her in the most clumsy and irritating of ways. ‘I thought you were sending Harry to Tynebridge?’

‘I was. Until we got word that Ryan Fisher was willing to speak to us one-on-one before the main press conference, so your plans for the day have changed, kiddo. You’re the only one I can trust to do this interview properly.’ Kevin Russell pushed a hand through his light-brown, slightly ruffled hair and stood up before shoving both hands in the pockets of his well-cut black trousers. ‘Ten-thirty, Tynebridge Stadium. There’s a pass waiting for you at reception. Come and see me when you get back.’

Amber threw her head back and closed her eyes. She actually loved this time of year, when the new football season was just beginning, the summer transfer window was drawing to a close and rumours and speculation were rife. There was a certain kind of energy filling the Sports Department as everyone tried to second guess just who might be signing who, or which player was about to leave English football behind for the chance to experience, say, the excitement of La Liga over in Spain, or the opportunity to make more money than they could ever dream of over in Asia.

She’d been working on Newcastle-based regional news programme News North East for over ten years now, starting out as a junior reporter before climbing to the dizzy ranks of the show’s first ever female Sports Editor five years ago at the age of thirty-two. She loved her job. She was also extremely good at it.

Amber Sullivan had grown up surrounded by sport, so it was only natural that her work revolved around it. Her father, Freddie Sullivan, was an ex-professional footballer – and an ex-Newcastle Red Star player – who now managed a local lower-league club so being around sportsmen, and footballers in particular, was nothing new to her. Although, as she’d got older it had become less of an enjoyable experience, because Amber had grown up to be nothing short of beautiful. Which brought with it its own set of problems. With long, naturally dark hair that hung in loose waves around her shoulders, pale blue eyes and olive-toned skin she’d inherited from her late Spanish mother it was as if, one day, she’d suddenly turned from that tomboy who loved a kick-about with the lads into a stunning young woman, which in turn meant that a lot of the sportsmen she knew suddenly stopped seeing her as “one of them”, and began seeing her as more of a conquest. Especially the footballers. Even though they knew her father, respected him, looked up to him, they didn’t seem to have the same respect for his daughter.

Because of that, Amber had always made a conscious effort to stay away from relationships with sportsmen of any kind, but she steered clear of relationships with footballers more than any other sportsmen. She wasn’t perfect, though, and she’d strayed from that self-imposed rule only briefly a few years back when she’d embarked on a short relationship with a player called Ronnie White, a man who had gone on to become one of her closest friends. But Ronnie had been different to the others, an exception. So she had no intention of going there again, no desire to become emotionally involved with men who could quite easily hurt her with their selfish behaviour and egos that seemed to need boosting on an hourly basis. It just wasn’t on her agenda, despite these men being the people she hung out with both professionally, and personally, on a frequent basis. Amber Sullivan had no desire to be a WAG. The whole lifestyle some of those women signed up for was nothing short of abhorrent to her because, deep down inside, she was still that tomboy who’d accompanied her father to nearly all of his matches, learning all about the so-called “beautiful game” from the very best. Her interest was in the sport – not the men who played it. Unless it was on a purely professional level, of course.

No, she was quite happy being single. Feisty and fiercely independent, Amber had no room in her life for a man. Except her dad. He was the only man who mattered to her right now, especially since the loss of her mother just two years ago. As an only child that had pushed her and her father even closer together, so, in between making sure he was okay, and her job at News North East, she had no time for anything resembling a serious relationship. She had no time for relationships, full-stop. They would only get in the way.

She sat up and looked over towards Kevin’s glass-fronted office. He was standing at the window tapping his watch and shrugging. Amber couldn’t help but smile. He was going to give himself another angina attack if he didn’t learn to relax a bit more. She’d never been late for an interview, never missed an appointment. Amber Sullivan let nothing get in the way of her work, and Kevin Russell knew that. Yet still he stressed out.

She stood up, grabbed her bag and mouthed
‘I’m going’
at her producer, who smiled his thanks and turned away from the window to answer his constantly ringing phone. Amber had a feeling today was going to be one of those days when her feet didn’t touch the ground, but those were the kind of days she loved – when she was part of something big and exciting. And, right now, as far as the world of North East football was concerned, there was nothing bigger or more exciting than the arrival of Ryan Fisher.

Vegenrage: The Magic User by Robert Spina
Dressed for Death by Donna Leon
That Summer in Sicily by Marlena de Blasi
Veil of Darkness by Gillian White
The Perils of Command by David Donachie
Forged in Fire (The Forged Chronicles Book 3) by Alyssa Rose Ivy
Strange Trouble by Laken Cane
Baby Benefits by Emily McKay
Roses in Autumn by Donna Fletcher Crow
Daughter of Destiny by HC Playa