Strings of Fate (Mistresses of Fate) 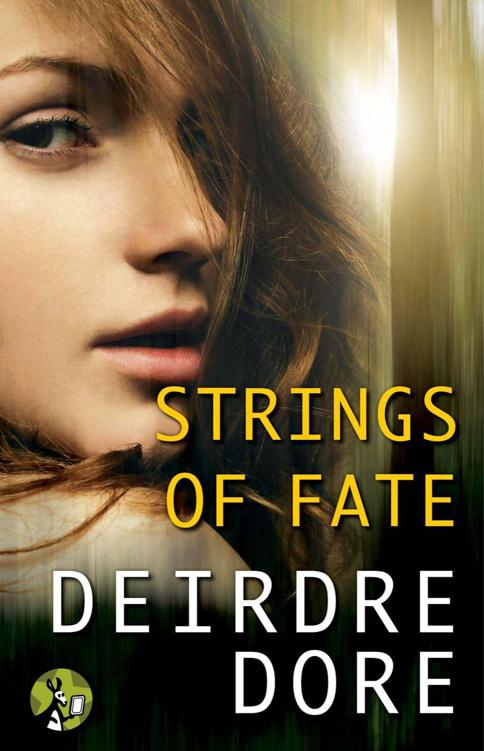 Thank you for downloading this Pocket Star Books eBook.

I will miss you forever.

Accept the things to which fate binds you, and love the people with whom fate brings you together, but do so with all your heart.

CHRISTINA PASCAL
tripped over a tree root and cursed Robert Frost. He was to blame for her current predicament; she was certain that she wouldn’t be damp, cold, and lost in the woods if it hadn’t been for his poem. She and her three best friends, Tavey, Raquel, and Summer, had spent part of the day reading “Stopping by Woods on a Snowy Evening”
in their third-grade advanced reading group, and now she couldn’t get that line out of her head.

“The woods are lovely, dark and deep,” she chanted, a scowl on her small face, as she followed Summer deeper into the trees. It was fall, and the woods didn’t seem any kind of lovely. Creepy, maybe. Brown. Wet. Foggy. She looked at the ground as she walked, careful not to step on any rotting logs or holes hidden by the piles of mottled orange leaves. The fog had thickened since they’d left the manicured section of Tavey’s property, and Chris, despite her inclination to blame Mr. Frost, knew that she was the reason they were on this particular adventure. She’d been bored, waiting for Raquel and Tavey, and upset with her father, so she’d bugged Summer to tell her a story about the woods.

“The woods are lovely, dark and deep,” Chris had singsonged, walking on one of the low stone retaining walls that lined the garden. “I like it.” She’d jumped down next to Summer. “Tell me a story about the woods.”

Summer, her head tilted slightly to the side as she followed the sound of Chris’s movements, seemed to be aware that Chris was a little anxious about something, and made her a better offer. “What if I tell you a
forbidden
story about the woods?”

“A forbidden one?” Chris’s eyes grew wide. Summer didn’t often tell stories. Tavey didn’t have much patience for tales of fairies and witches and magic worlds beneath the pond, but more than that, Summer’s family believed themselves to be witches. They lived in the woods not far away from Tavey’s property, and forbade members of their inner circle to share their secrets with the nonwitch world. Most everyone in Fate thought they were crazy and kept their distance, even though the family had been a part of the community for as long as anybody could remember.

“Yep,” Summer confirmed, her mouth curled in a small smile.

Chris felt her own smile growing in response—she liked nothing better than a little rule-breaking every now and then—especially if secret information was involved.

“Tell me.” She gripped Summer’s hands.

Summer sat, pulling Chris down to sit on one of the dozens of benches that could be found interspersed among the well-maintained gardens of Tavey’s estate. Fall mums surrounded them in colorful patches, and only a few red leaves littered the ground from a nearby maple tree. “You have to promise not to tell,” Summer teased.

“Pinkie swear,” Chris swore, and lifted her hand, pinkie finger extended. Summer, though blind, lifted her own hand, and unerringly hooked Chris’s pinkie finger with her own. It was a ritual, one that had occurred for more than four years.

Summer settled herself, hands in her lap, and began in her musical storyteller’s voice, “Deep in the woods, along a path of fallen logs, a carpet of green moss leads to the den of the string-makers.”

“Yes,” Summer confirmed. “In the den, a dark cave carved into the rock of the mountain, they raise the spiders that spin the threads of our lives. For a price, they will tell you one of your futures.”

“One future?” Chris questioned. “Can people have more than one?”

“Of course.” Summer smiled mysteriously, as if she were privy to secret knowledge that Chris could never hope to have.

“Can we find them?” Chris questioned eagerly, ignoring the mention of a price. She’d been struggling in school—and everywhere else—since her father’s arrest, and suddenly the thought of peering into the future, making sure everything would turn out okay, was all she wanted.

“You can’t always find them. Their world and ours are interwoven, one layer on the other, like the tracing paper you use in art class.” Summer raised her hands so that one was parallel to the other, demonstrating. “But sometimes, when the time is right, you can walk through one layer and into the other.”

Chris leapt up. “Is the time right now? Can we find them?”

A small frown marred the smooth skin of Summer’s forehead as she looked in the direction of Chris’s voice. “It’s foggy and cold in the forest, and Raquel and Tavey will be here soon.”

Chris waved that off. “I know, but Tavey won’t let us anyway—she’ll say it’s dangerous, that Old Abraham will catch us in the forest.”

Old Abraham was a crazy old soldier who lived on a tiny sliver of land between Tavey’s family’s property and the land that belonged to the Havens—Summer’s family. They had to cross Abraham’s property to get from Tavey’s home to Summer’s.

“Let’s go, please,” Chris pleaded. She knew she was behaving like a brat, but she wanted an answer—she was tired of wondering what would happen to her dad, and to her.

Summer sat very still while she considered this, as still as one of the marble statues in the main garden. Chris bounced on the balls of her feet impatiently, but didn’t say anything.

“All right,” Summer agreed, and had stood. “But no promises. We may not find them.”

“You’ll find them.” Chris had been certain. Even though Summer was blind, she had an uncanny way of finding her way through the woods like someone pulled along by a string, or by the hand of Fate herself. She said it was because she’d been playing in them since she was little, but Chris had always thought it was more than that.

An hour later, they were deep in the woods, and Chris had to scramble to keep up with Summer, following her tiny fairylike frame, with its bony shoulders and long tail of white-blond hair tied with a blue ribbon. It was impossible, really, that someone without the gift of sight could move through the woods as gracefully as she did. While Chris slipped on the thick piles of leaves, stumbled ankle-deep into puddles of muck, and lost her knitted cap to a pickpocket limb, Summer ghosted over logs and through shrubs—the blind leading the clumsy. She knew Summer’s sure-footedness had to be more than just muscle memory. Up ahead, Summer stopped abruptly in a small clearing, her head tilted slightly to the side, as it did when she was listening intently to something with her batlike hearing.

Chris wanted to call out, to ask Summer what she’d heard, but a small tendril of fog materialized in front of her. It seemed purposeful, this fog, curling and sniffing toward her like a curious animal. She stood frozen as the fog seemed to expand, swelling until Chris was wrapped in a thick blanket of mist, flashes of dark limbs and green moss appearing as she struggled violently to free herself, batting at the suffocating shroud. She caught a glimpse of Summer through the thick fog, but Summer was no longer alone. Chris could barely make out something else, something threatening: a dark shape looming over her friend.

“Summer!” Chris screamed, jolting herself awake, wrapped tight in the quilt on her bed.

The Blackcollar by Zahn, Timothy
Oz - A Short Story by Ann Warner
The Lost Garden by Helen Humphreys
SPARX Incarnation: Mark of the Green Dragon (SPARX Series I Book 1) by K.B. Sprague
Blood of Tyrants by Naomi Novik
Sintown Chronicles I: Behind Closed Doors by David O. Dyer, Sr.
The Enforcer by Marliss Melton
A Broken Kind of Life by Jamie Mayfield
Taken by Fire by Sydney Croft
The Half-Stitched Amish Quilting Club - 02 - The Tattered Quilt by Wanda E. Brunstetter