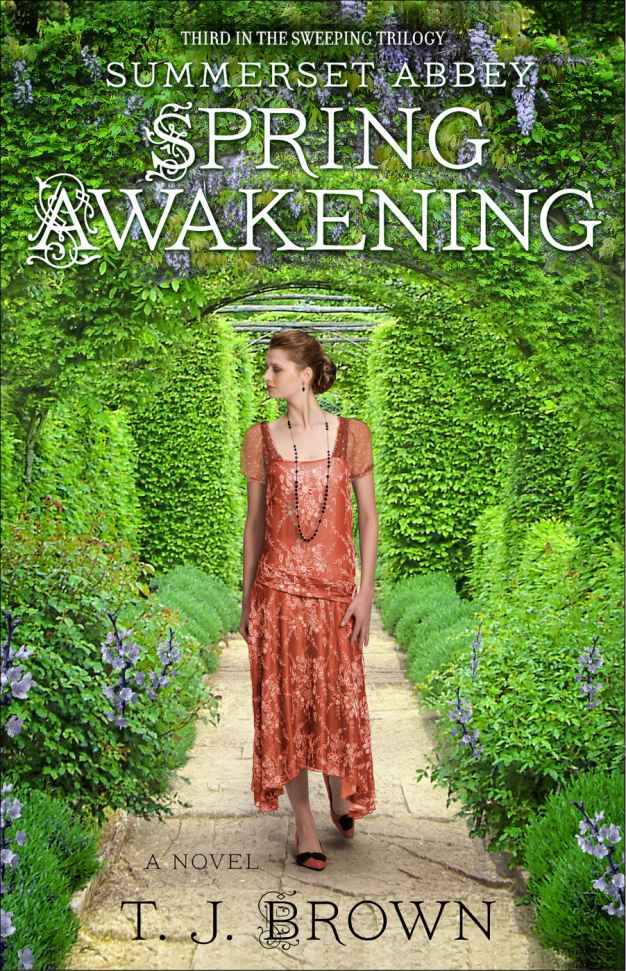 I dedicated this book to my mother, Carol M. Foreman.

Thank you for always being there.

There aren’t enough props in the world to give Molly Glick for her spot-on career guidance. Literary agents just don’t get any smarter, savvier, or more supportive than she is.

Heartfelt thanks to editor Lauren McKenna and assistant editor Alexandra Lewis, who earned the title Editor Extraordinaire for answering panic-stricken e-mails all hours of the day and night. I’d also like to thank associate director of copyediting John Paul Jones, and the rest of the Summerset team at Gallery Books, most notably Lisa Litwack for the stunning cover and publicist Kristin Dwyer for her enthusiastic support.

And as always, I want to acknowledge and thank the people in my life who give their never ending love and support: Hubby Alan, son Ethan, daughter Megan, soon-to-be daughter-in-law Megan, and someday-to-be son-in-law Chris. I love you all.

F
or anyone else, this place would have fostered a sense of serenity if not pure bliss, but Rowena Buxton felt nothing but a sad sort of detachment.

The musical notes of a nearby stream were accompanied by the occasional burst of her friends’ laughter. In July, the Suffolk countryside shone with a tapestry of different greens, spotted generously with yellow and pink flowers in the grass. Rowena sat alone on a low rock wall watching her friends, also known as the Cunning Coterie, enjoying the impromptu picnic out of sight from the watchful eyes of society’s gossiping matrons.

Young women wearing pastel muslin and carrying lacy, white parasols moved indolently among young men in their light suits and straw hats. Occasionally, a summer breeze would lift the ribbons or stir the flowers on the women’s hats, but it did little to relieve the heat that buzzed around them like bees. Visiting Summerset Abbey had been a treasured part of Rowena’s childhood and contained dozens of memories just like this one . . . excepting the inevitable pairing off, imbibing of alcohol, and smoking of expensive Turkish cigarettes that hadn’t arrived on the scene until recently. Perhaps the prior generation hid their vices better, or perhaps Rowena just hadn’t noticed.

“Do you think he’ll ever win her heart?” Sebastian asked, coming up next to her.

She startled, almost falling off the wall, and he put his arm around her waist to steady her.

“Who? Oh, Kit and Victoria?” She glanced to where her younger sister sat with her back against the trunk of a beech tree organizing flowers into piles while Kit read to her from the latest E. M. Forster novel. Kit’s dark-red head was tilted close to her sister’s fair one. No doubt Victoria was sorting herbs while Kit ardently hoped his dedication would pay off next time he asked her to marry him. “Poor sot. He has her heart. It’s her hand in marriage she won’t give.”

“What about your heart?” Sebastian’s eyes were grave.

Rowena turned to look at her fiancé. “My heart is my own.”

“Is it really?” he asked, his voice casual.

She twirled the flute of champagne in her fingers before draining the glass. “Of course. And you have my hand in marriage, my dear, so all is well.” She ignored the pain that tightened her chest and banished her former lover from her mind.

She held her glass up, signaling to the servant keeping careful watch by one of the wagons that she needed another. He was there in moments with champagne that had been kept chilled in the stream.

“Would you like some, sir?” the servant asked Sebastian, after filling Rowena’s glass. She frowned at the white gloves he wore, thinking about how ridiculous it was to have a servant wear white gloves in such heat. And on a picnic no less. The servant kept his gaze on the ground, and Rowena wondered what his name was. Like so many others in the grand estate, this serving man was anonymous. She tried not to think of her and her sister’s former home in London, where the servants were a valued
part of the family. Perhaps when she was the mistress of Eddelson Hall, she could really get to know her servants.

Sebastian waved a flask. “No, thank you. I have my own.”

The man left and Sebastian turned back to Rowena. “Kit’s pretty stubborn.”

To Rowena’s relief, Sebastian returned to the topic of his best friend and her little sister. Lately, he’d begun pressing her for more affection than she was ready to give him. Their engagement was more one of convenience than love—both had had their hearts broken and neither wanted to risk their feelings again. They were dear friends and their marriage would be a partnership based on mutual respect and friendship. Why was he suddenly pushing her? Not that she didn’t enjoy his physical affection—her body tingled at his touch, but that disturbed her as well. What kind of woman was she that her body would react this way with two very different men, only one of whom she truly had loved?

Tired of her own thoughts, Rowena hopped down off the wall. “Let’s play some cricket, shall we?” she called to the others.

Annalisa, a vivacious young woman with light brown hair and dark eyes, groaned from where she reclined against a pile of soft pillows. “What is it with you Buxtons? You’re all just so active. Always busy doing something.”

Cousin Elaine jumped up with surprising eagerness. “It’s because our tolerance for boredom is so low. Isn’t that right, Colin?” She looked to her brother, who hadn’t budged.

Rowena knew he hadn’t moved because he had a perfect view of Annalisa’s décolletage from where he was lying. “Oh, come on, it isn’t that hot and we have plenty of cold water. Don’t be so bloody lazy,” Rowena said.

A servant brought the necessary equipment and there was a lot of good-natured wrangling over who would be on whose team. Victoria’s asthma, though much improved, still prevented her from playing any kind of sport, and she was conscripted to keep score.

In spite of the protests, the heat, and their only having seven people on each team, the group played with a surprising zeal.
And why not
, thought Rowena as she waited for her turn to bat,
they’d grown up doing little else besides going to school and playing games. It was what their set did
.

She glanced up into the sky, longing for her aeroplane. Only when she flew could she forget about her heartache, the unfairness of the world she was born into, and her grief. Only in the air was she truly happy. But her aeroplane, a Vickers biplane given to her by her uncle, was almost a day’s journey southwest. Now that she was one of a select few women in England to have been awarded her pilot’s license, her uncle wondered why she didn’t bring the Vickers to Summerset to be stored in the barn her friend Mr. Dirkes used for his test planes. She couldn’t tell her uncle the truth.

She was afraid of running into Jonathon.

“Rowena! It’s your turn!” Colin yelled. Her muslin skirt had a slit up one side, but running was still problematic. Rowena enjoyed sports and was good at them. Had she been born into a different sort of family, she might have been on a team of some sort. But upper-class girls didn’t involve themselves with team sports. Besides, she would rather fly than chase balls.

She hit the ball with a crack and heard Victoria and Elaine whooping behind her. Pulling her skirts up, she ran with all her strength while Sebastian, Kit, and Daphne looked for the ball in the long meadow grasses. She’d run twice before Kit yelled surrender.

“That’s the win anyway!” Victoria yelled, jumping up and down.

“Oh, don’t be a sore loser, Edward,” Lady Diana drawled from the corner of her mouth. Lady Diana was commonly believed to be the most beautiful of the Coterie and the most adventurous, though a small but discriminating group considered Rowena to be far prettier. “Your competitive nature is rearing its ugly puss.”

Edward grinned. “But like Puss in Boots, my competitive nature has held me in good stead. It allows me to woo one as lovely as yourself, Lady Manners.”

Victoria nodded as the rest of the Coterie came in from the field and gathered round. “Rowena’s team did win. Look, here is the score sheet.”

Edward pushed them aside playfully. “Why should I take the word of a jailbird?”

Rowena froze. For a fraction of a second no one moved; then in a blur of movement and with a loud smack, Kit punched Edward square in the jaw. Edward went hurtling backward, falling against Rowena and knocking her to the ground.

Victoria grabbed Kit’s arm. “What is wrong with you? He was only teasing me! He always calls me that. Why are you such a brute?”

Another hush fell over the group. Rowena winced at the pain in Kit’s eyes when Victoria knelt down beside Edward.

Stone-faced, Kit reached his hand out to Edward. “Sorry, mate. I guess I overreacted just a bit.”

Edward rubbed the side of his face. “Not at all. I enjoy the occasional bash on the jaw.”

Victoria stood abruptly, scowling at Kit. “ ‘The injustice they warrant. But vain is my spite. They cannot so suffer who never do right.’ ”

Rowena laughed in relief. For a moment she thought there might be a fight with her sister in the middle of it. Released, the others joined in Rowena’s laughter and the tension lessened.

Sebastian helped her to her feet, then held her waist possessively until she shrugged away, complaining that exerting herself in such heat had given her a headache. But she worried as she helped pack up the picnic. How much longer could she put him off?

The Killin' Fields (Alexa's Travels Book 2) by Angela White
The Drought by Patricia Fulton, Extended Imagery
Indian Summer by Elizabeth Darrell
The Fertile Vampire by Ranney, Karen
The Sultan's Seal by Jenny White
All That and a Bag of Chips by Darrien Lee
Second Chance for Love by Leona Jackson
The Five Gold Bands by Jack Vance
The Cruiserweight by L. Anne Carrington
Rocking Horse Road by Nixon, Carl