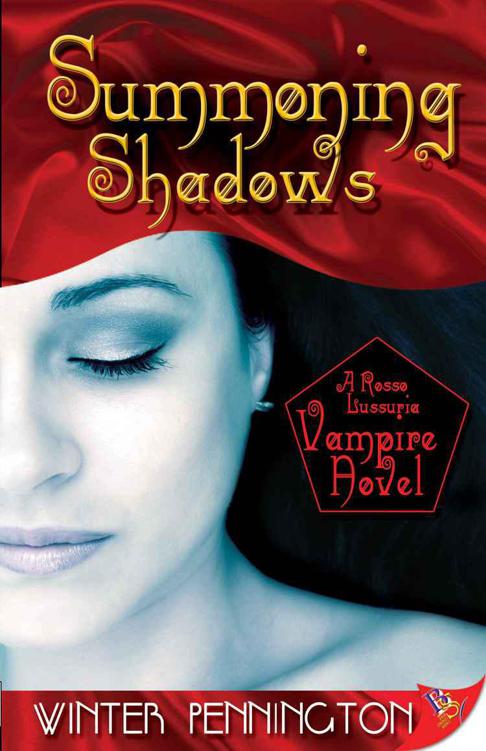 She has taken Iliaria, the Great Siren Dracule, as her lover and ally, wearing Iliaria’s sigil as a sign of their unlikely alliance. While Epiphany bears her mark, Iliaria upholds her oath and hunts one of her own—the traitor Damokles who seeks to destroy the vampire-kind. Yet Damokles is not the only renegade Dracule who wants to see the fall of the Rosso Lussuria. The Draculian society is split in two—those who seek to protect Azrael’s Gift and those who seek to eliminate it.

The Rosso Lussuria face enemies both old and new. Dismantling a reign of impending terror and uniting a clan is not so easily done when those close to you are all too adept at keeping their own council and agendas. 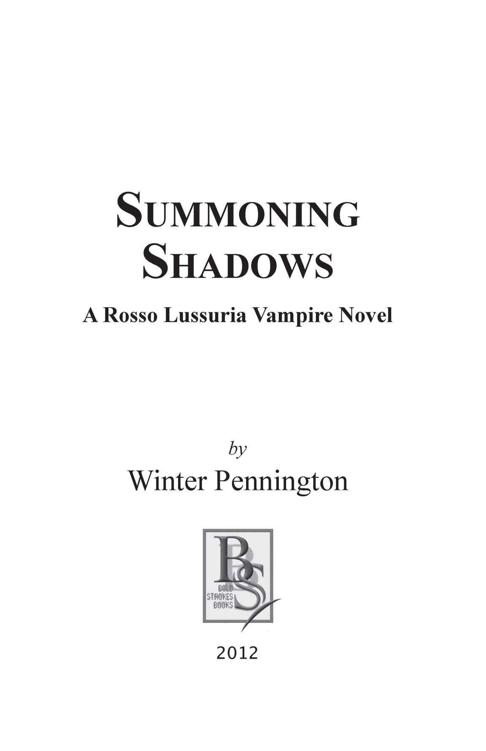 © 2012 By Winter Pennington. All Rights Reserved.

Once Upon a Twilight

“You will learn, cara mia, to control your thirst.” Renata’s honeyed voice washed over the reverberating din of my hunger. The blindfold she’d set in place kept me from truly perceiving her, but I did not need to see her. Even if she had spoken no words, she was my Siren and my queen.

I could sense her where she stood some feet away. A thread of longing and connection pulled tight between us, and I knew she watched me. I could feel her gaze on me as intimately as a caress.

My arms were stretched high above my head, secured by some kind of metal shackles I could not break or slip from. I struggled in vain to get to the woman who knelt at Renata’s feet.

I could feel the shadow beat of her pulse on my tongue. There was no fear in her, none that I could discern by the steady beat of her heart and breath. She knew why Renata had bid her to kneel, and yet, she did not fear.

Justine was one of the Donatore, a human blood donor among the Rosso Lussuria vampires. She was the only Donatore I had ever met face-to-face within the walls of the Sotto, our underground kingdom.

The blood in her veins tempted me as the fruit hanging from the Tree of Knowledge must have tempted Eve, thick and ripe, tempting and irresistible, begging to be tapped and released.

Yearning echoed throughout my limbs. It made my fingers tingle with the ache to touch Justine, to take hold of her as if she were nothing more than a succulent apple within my reach.

I would have called it desire, but that was too passionate a word. The hunger narrowed the scope of my thoughts into something primal, simple…animal.

“Epifania,” Renata said and the tone in her voice was sweetly commanding. It took effort for me to focus on the sound of it and to resist the urge to fight my bonds.

She had taught me to serve and to please, but my control over my thirst was a hard-won battle I had to conquer myself.

Siren or no, she could not erase the very essence of what I had become when she had given me the kiss of death and rebirth.

You may wonder what it was like, the first night I spent with Renata.

And to that, I can only say this: it was beautiful and terrible.

She made love to my dying body, slowly, gently, artfully, riding my flesh beyond illness and into the throes of ecstasy. When she drove her fangs into my neck, I gave my life to her willingly. She destroyed my withering body in the fire of her passion, shielding me in the cage of her ardor.

On the following evening, I was reborn. I awakened to a world in which the senses dominated. But with the gift came the curse: a hunger I had never known.

It is said some go mad on the night of their first awakening. For me, I can only say that it was the first time I had ever truly felt alive. Even the hunger, in its own way, fanned the bright flame of life.

Renata brought to my lips the sweet wine of her blood. She soothed the fiery, cutting pain that threatened to be the source of my undoing. At the kiss of her blood, at the chalice of her wrist, I found a heaven man had never dreamt of.

The evenings passed, and each night when I woke, Renata was there to abate my hunger and to keep the madness of bloodlust at bay. In time, she taught me the arts of the bedchamber with skill and patience. She revealed to me the beauty and the heaven in being
vampire
.

That night, with Justine at her feet like a loyal dog, she unveiled to me the horror and the hell of it. For those who may think Renata had brought Justine before me as a gift, it was not so.

She used Justine to teach me the dire consequences of my curse. Justine was my blood martyr.

Renata had done her best to prepare me for weeks. Each week, she loosened the shackles she used to bind me, until they were loose enough that I was able to slip them, much to Justine’s misfortune.

But Justine had known, too. She had lived in seclusion among the Rosso Lussuria long enough to understand. Though she looked to be a girl of some twenty years of age, she was older than even I, kept youthful and fresh every month by nothing more than a drop of queen’s blood.

All the practice in the world cannot spare a vampire her first kill. Some days, I wish Renata had chosen someone other than Justine, for I had known her. I had seen her alive and well. But such had been Renata’s purpose.

When I think of Justine now, I remember the husk of her body. I recall the taste of her blood in my mouth, the life I raped from her in order to sustain my own. To further drive forward her point, Renata left me there, kneeling over Justine’s body, her blood on my mouth and hands.

The blood of a vampire can sustain and prolong human life. It makes mortals a hardier lot. But I had taken it all from Justine, even that small touch of magic.

Three nights I spent with Justine’s body as my only companion. Renata did not seek to comfort me. She did not console me. She threw off the shackles that had held my hunger at bay and barred the door, giving me no room to escape or flee from the lesson at hand.

And when the bloodlust passed, I realized what I had done.

One might believe I bear resentment toward Renata for the harshness of her lesson. Yet, if it had not been for Justine’s sacrifice and for what Renata had done, I do not think I would have ever found my conscience again. Every night I woke with Justine’s body as a reminder, I gained an ounce of something stronger than the hunger. I regained bits and pieces of myself.

Renata returned on the third night and her guards, Dante and Dominique, took Justine’s body away. Renata stood just inside the doorway, freshly bathed and dressed in a gown of black silk, her long waves of hair still damp.

I had not fed in three nights, and though I grew weak, I could feel Justine’s blood inside me still. Faint, like an echo, but still there.

Renata gave the order for me to bathe and I went, drawing my own bath and soaking quietly. When I emerged garbed in one of the fine dressing gowns she had provided for me, I found she had not been waiting for me alone. A small human boy knelt in the middle of the room, mirroring Justine’s position three nights prior.

“Cara mia,” Renata said as she swept her hand out toward the boy.

I paused in the doorway, refusing to step further into the room. The blood in the boy’s veins tried to seduce me like panpipes playing in a distant forest, a forest that promised wild abandon. With a will, I shook my head. “No.”

“He is there for the taking, cara mia. Will you not feast more than your eyes?” she asked.

As if she had spoken some command, the boy pulled aside his shoulder length honey hair and tilted his head back to offer the line of his neck. He reminded me so of Justine that my limbs trembled. Renata had chosen well, for he looked near enough like Justine to have been her sibling.

Archaic by Regan Ure
(Shadowmarch #1) Shadowmarch by Tad Williams
The Mike Hammer Collection, Volume 2 by Spillane, Mickey
Erik Handy by Hell of the Dead
House of Memories by Taylor, Alice;
The Day After Roswell by Corso, Philip J.
Full Contact by Sarah Castille
The Proud Wife by Kate Walker
Knight Predator by Falconer, Jordan
The Mistake I Made by Paula Daly