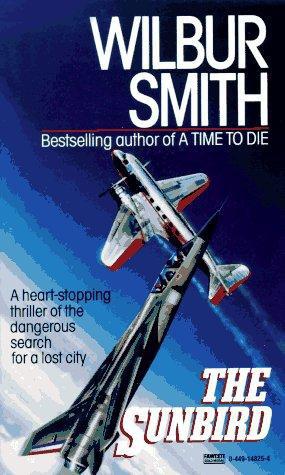 It cut across the darkened projection room and exploded silently against the screen - and I did not recognize it. I had waited fifteen years for it, and when it came I did not recognize it. The image was swirled and vague, and it made no sense to me for I had expected a photograph of some small object; a skull perhaps, or pottery, or an artefact, a piece of gold work, beads - certainly not this surrealistic pattern of grey and white and black.

Louren's voice, tight with excitement, gave me the clue I needed. 'Taken at thirty-six thou at six forty-seven on the fourth of Sept,' that was eight days ago, 'exposed in a 35 mm Leica.'

An aerial photograph then. My eyes and brain adjusted, and almost instantly I felt the first tickle of my own excitement begin as Louren went on in the same crisp tone.

'I've got a charter company running an aerial survey over all my concession areas. The idea is to pick the strike and run of geographical formations. This photograph is only one of a couple of hundred thousand of the area - the navigator did not even know what he was photographing. However, the people in analysis spotted it, and passed it on to me.'

His face turned towards me, pale and solemn in the glare of the projector.

'You can see it, can't you, Ben? Just off centre. Top right quarter.'

I opened my mouth to reply, but my voice caught in my throat and I had to turn the sound I made into a cough. With surprise I found I was trembling, and my guts seethed with an amalgam of hope and dread.

'It's classic! Acropolis, double enclosure and the "phallic towers".' He was exaggerating, they were faint outlines, indistinct and in places disappearing, but the general shape and configuration was right.

'Top of picture - she's right. Ben. Facing north. Could the towers be sun-orientated?'

I did not speak again. The reaction was coming swiftly now. Nothing in my life had been this easy, therefore this was suspect and I searched for the flaws.

'Oh bull!' Louren cut in, the excitement still bubbling in his voice. He jumped up and strode to the screen, picked up an ebony pointer from the lectern and used it to spot the cell-like stippling around the outline of what he was pleased to presume was the main enclosure. 'You tell me where you've ever seen geological patterns like that.'

'Damn you.' He laughed now, and the sound was good for he did not often laugh these days. 'I should have known you'd fight it. You are without doubt the most miserable bloody pessimist in Africa.'

'It could be anything, Lo,' I protested. 'A trick of light, of shape and shade. Even conceding that it is man-made - it could be recent gardens or agriculture--'

'A hundred miles from the nearest surface water? Forget it, Ben! You know as well as I do that this is the--'

'Don't say it,' I almost shouted, and was out of the padded leather chair, across the projection room and had hold of his arm before I realized I had moved.

'Don't say it,' I repeated. 'It's - it's bad luck.' I always stutter when I am excited, but it is the least of my physical disabilities and I have long ago ceased worrying about it.

Louren laughed again, but with the trace of uneasiness he shows whenever I move quickly or unleash the strength of my arms. He stooped over me now, and eased my fingers that were sunk into the flesh of his forearm.

'No. But he massaged his arm as he moved to the control panel and doused the projector, then turned the wall switch and we stood blinking at each other in the light.

'My little Yiddish leprechaun,' he smiled. 'You cannot fool me. You are wetting yourself.'

I looked up at him, ashamed of my outburst now, but still excited.

'All right.' I looked away and picked my words. 'It looks, at first glance, quite interesting.'

And he threw back that great golden head and bellowed with bull laughter.

'You're going to have to do a lot better than that. Let's try again.'

His laughter I cannot resist, and my own followed immediately. I was aware of its birdlike quality against his.

'You beauty!' he shouted. 'You little beauty.'

It was years since I had seen him like this. The solemn banker's mask stripped away, the cares of the Sturvesant financial empire forgotten in this moment of promise and achievement.

'Come,' he said, serious again, and we went to the long table against the wall. There was a chart spread and pinned on the green baize. It was a high table, and I scrambled quickly on to a chair and leaned across it. Now I was almost on equal terms with Louren who stood beside me. We pored over the chart.

I searched it quickly, looking for some indication - a cross, or pencil mark perhaps.

'Come on, Lo. Don't try and sell me shares in Sturvesant Minerals. Where the hell is it?'

'We've put a landing-strip in here that will take the Lear jet. Just finished it.'

'It can't be that far south of the gold series.'

'It isn't,' Louren reassured me. 'Throttle back, you'll rupture something.' He was enjoying himself tormenting me.

His finger moved across the chart, and stopped suddenly - my heart seemed to stop with it. It was looking better and better. The latitude was perfect, all the clues I had so painstakingly gathered over the years pointed to this general area.

'Here,' he said. 'Two hundred and twelve miles south-east of Maun, fifty-six miles from the south-western beacon of the Wankie game reserve, tucked below a curve of low hills, lost in a wilderness of rock and dry land scrub.'

'Wow!' Louren shook his head. 'You do believe it. You really do!'

'Someone else could stumble on it.'

'Another week!' I cried in anguish.

'Ben, I can't get away before then. I've got the Annual General Meeting of Anglo-Sturvesant on Friday, and on Saturday I have business in Zurich - but I'll cut it short, especially for you.'

'Cut it altogether,' I begged. 'Send one of your bright young men.'

'When somebody lends you twenty-five million, it's only polite to go fetch the cheque yourself, not send the office boy.'

'Christ, Lo. It's only money - this is really important.'

For a moment Louren stared at me, the pale blue eyes bemused and reflective.

'Twenty-five million is only money?' He shook his head slowly and then wonderingly as though he had heard a new truth spoken. 'I suppose you are right.' He smiled, gently now, the smile of affection for a well-loved friend. 'Sorry, Ben. Tuesday. We'll fly at dawn, I promise you. We'll recce from the air. Then land at Maun. Peter Larkin - you know him?'

'Yes. very well.' Peter ran a big safari business out of Maun. Twice I'd used him on my Kalahari expeditions.

'Good. I've been on to him already. He will service the expedition. We will go in light and fast - one Land-Rover and a pair of three-ton Unimogs. I can only spare five days - and that's a squeeze - but I'll get a charter helicopter to fetch me out, and I'll leave you to scratch around--' As he talked Louren led me out of the projection room into the long gallery.

Sunlight spilled in through the high windows, giving good light to the paintings and sculptures that decorated the gallery. Here works of the leading South African artists mingled easily with those of the great internationals living and dead. Louren Sturvesant, and his ancestors before him, had spent money wisely. Even now in the urgency of the moment, my eyes were tugged aside by the soft fleshy glow of a Renoir nude.

Louren paced easily over the sound-deadening pile of Oriental carpets, and I matched him stride for stride. My legs are as long as his and as powerful.

'If you turn up what we are both hoping for, then you can go in full-scale. A permanent camp, airstrip, assistants of your choice, a full crew, and any equipment you call for.'

'Please God, let it happen,' I said softly and at the head of the staircase we paused. Louren and I grinned at each other like conspirators.

'You know what it could cost?' I asked. 'We might be digging for five or six years.'

'It could run into a couple of hundred thousand.'

'It's only money, like the man said.' And again that great bull laugh started me off. We went down the staircase roaring and tittering, each in his own way. Elated and hyper-tense, we faced each other in the hall.

'I'll be back at seven-thirty Monday evening. Can you meet me at the airport, Alitalia flight 310 from Zurich? In the meantime you get your end arranged.'

'I'll need a copy of that photograph.'

'I've already had an enlargement delivered by hand to the Institute. You have got a week to gloat over it,' He glanced at the gold Piaget on his wrist. 'Damn. I'm late.'

He turned to the doorway at the moment that Hilary Sturvesant came through it from the patio. She wore a short white tennis dress, and her legs were long and achingly beautiful. A tall girl with gold-brown hair hanging shiny and soft to her shoulders.

'I'm sorry, Hil. I meant to tell you I wouldn't be staying for lunch, but Ben will need somebody to hold him down.'

'You've shown him?' She turned and came to me, stooped to kiss me on the lips easily and naturally, with not the least sign of revulsion, and then she stepped back and smiled full into my eyes. Every time she does that she makes me her slave for another hundred years.

'What do you think of it, Ben? Is it possible?' But before I could answer Louren had slipped his arm about her waist and they both smiled down at me.

'He's doing his nut. He's frothing at the mouth and doing back flips. He wants to rush into the desert now, this minute.' Then he pulled Hilary to him and kissed her. For a long minute they were oblivious of my presence as they embraced. They are, for me, the epitome of beautiful woman and manhood, both of them tall and strong and well-favoured. Hilary is younger than he is by twelve years, his fourth wife and the mother of only the youngest of his seven children. In her middle twenties she has the maturity and poise of a much older woman.

'Give Ben some lunch, my darling. I'll be home late.' Louren pulled away from the embrace.

The Keeper of Secrets by Judith Cutler
Calendar Girl by Marsden, Sommer
Only Love by Elizabeth Lowell
Naughty No More by Brenda Hampton
Vichy France by Robert O. Paxton
Bloodboots: A Breadcrumbs For The Nasties Short by Novak, Steven
Undeniably Yours by Heather Webber
Found in Flames by Desconhecido
Heaven and Mel (Kindle Single) by Joe Eszterhas
Shooting for the Stars by Sarina Bowen