Read Sure of You Online 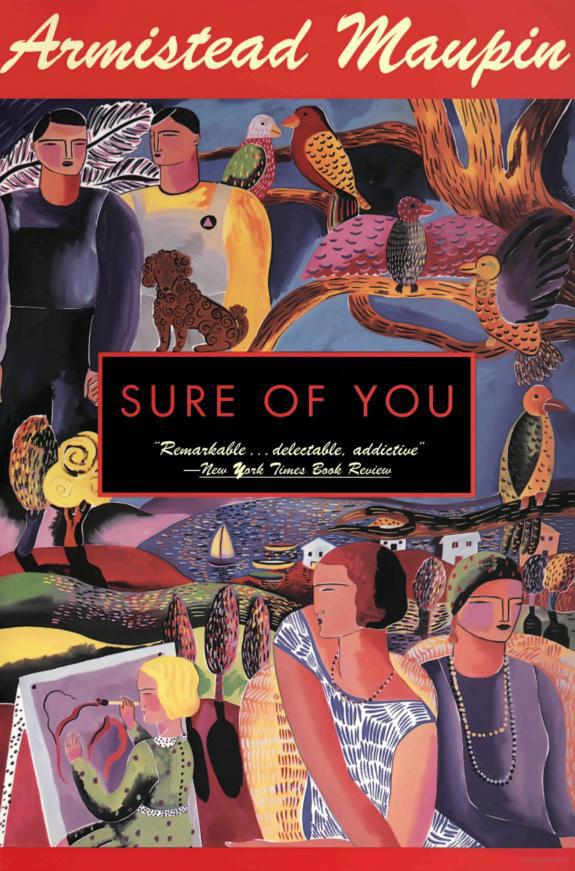 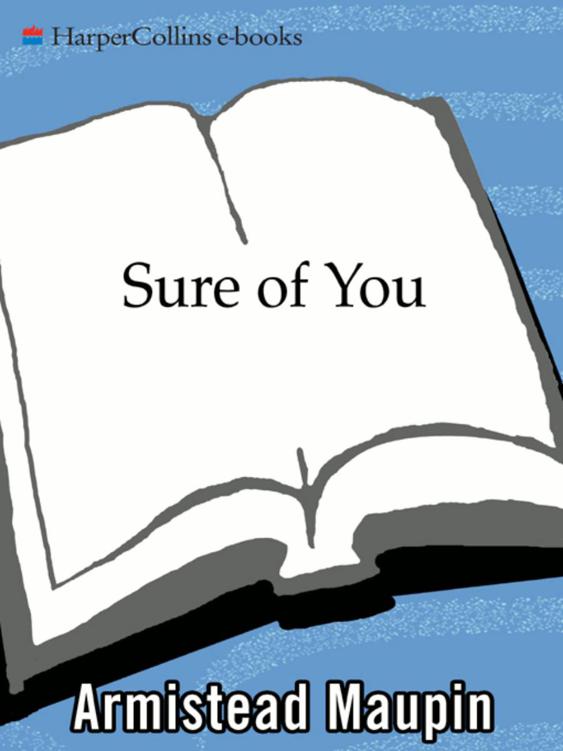 Piglet sidled up to Pooh from behind.

“I just wanted to be sure of you.”

A. A. MILNE
The House at Pooh Corner

Some Rather Exciting News

Love on the Machine

Another Letter to Mama

That Much in Love

Other Books by Armistead Maupin

T
HERE WAS SOMETHING DIFFERENT ABOUT HIS WIFE’S
face, Brian Hawkins had decided. Something around the mouth, maybe. It was there at the corners, where her real mood always showed, even at a moment like this, when she certainly couldn’t want it to show. He tilted his head until his eyes were even with hers, then withdrew a little, like someone appraising a portrait.

God, she was pretty! She gave depth to pretty, investing it with seriousness and intent. But something was eating at her, nibbling away from inside, while she sat there smiling, nodding, speaking softly of pet bereavement.

“A Pomeranian,” replied this morning’s guest, a big, blowsy matron straight out of Laurel and Hardy.

“And when did she…pass away?”

The pause was masterful, he thought. Mary Ann’s gentle little search for the euphemism was either admirably kind or savagely funny, depending on the sophistication of the viewer.

Poor old cow, he thought. Headed straight for the slaughterhouse.

“So you decided to have her…?”

There was nervous tittering in the studio audience. Nervous because Mary Ann had yet to abandon her respectful, funereal face. Be nice to this lady, it said. She’s a human being like anyone else. As usual, it was hugely effective. Mary Ann was never caught with blood on her hands.

His partner, Michael, walked into the nursery office, dropped his work gloves on the counter, draped an arm across Brian’s shoulders. “Who’s she got today?”

“Watch,” said Brian, turning up the sound. The woman was opening a wooden carrying case, shaped like a doghouse. “She’s my child,” she was saying, “my precious little baby. She’s never been just a dog to me.”

Michael frowned at the set. “Whatthefuck.”

The camera moved in for a tight shot as Mary Ann silenced the gigglers with another glance. The woman plunged her chubby hands into the box and produced her precious Fluffy, fluffy as ever.

While Michael hooted, the woman arranged the rigid beast on her lap, patting its snowy fur into place. To Brian she seemed horribly vulnerable. Her lip trembled noticeably as her eyes darted back and forth between the audience and her inquisitor.

“There are some people,” said Mary Ann, even more gently than before, “who might find this…unusual.”

“Yes.” The woman nodded. “But she keeps me company. I can always pet her.” She demonstrated this feature half-heartedly, then gave Mary Ann a look of excruciating innocence. “Would you like to try it?”

Mary Ann shot the quickest of takes to the audience. The camera, as usual, was ready for her. As the studio reverberated with laughter, Brian reached out and slapped the set off with his palm.

“C’mon. You don’t go on TV with a freeze-dried dog and not expect a little teasing.”

“Did you see her face, man? She wasn’t expecting that.”

“Hey, fellas,” said a customer in the doorway.

“Oh,” blurted Michael. “Find what you need?” “Yeah. If someone could help me load them…”

Brian jumped to his feet. “Hey…fix you right up.”

The woman strode—no, slinked—through several aisles of shrubbery, making her selections. Brian followed her, feeling a boner growing in his overalls, then lugged the cans back to the office, where he tallied her bill and clipped the cans.

She handed him her Visa card. “That’ll do it.” Her hair was brick red and sleek as sealskin. Something watching from behind her molten eyes made him think she might be shopping for more than shrubbery.

Fumbling, he ran her card through the machine. “You been here long?” she asked.

Her mouth flickered. “You.”

She tapped her long fingers on the countertop. “I used to come here when it was called something else.”

“Oh, yeah.” She smiled. “I like Plant Parenthood better.”

He removed the slip and handed it to her with a pen. She signed it with a flourish, then ripped the carbons into neat little squares, smirking at him all the while. “Not that I don’t trust that face,” she said.

He felt himself reddening.
You fucking dork. How long has it been, anyway?

“Think I could tax those muscles?”

“My car’s down the street.”

He gestured toward the cans. “Is this all?” Of course this is all, asshole. You just rang up the purchase, didn’t you?

“That’s it.” She wet her lips with a cat’s precision, touching only the corners with the tip of her tongue.

He had grabbed two of the cans when Polly came bolting into the office. “Need a hand with those?”

His employee sauntered around the shrubs as if to size up the situation for herself. “You can’t do three.”

Polly gave him a half-lidded smile and a courtly little sweep of the hand, as if to say: She’s all yours, greedy. Polly was young enough to be his daughter, but she could be pretty damn intuitive when it came to sex.

The woman looked at Brian, then at Polly, then at Brian again.

Flashing a freckled grin, Polly hefted two of the cans and strode out of the office. “Where to?”

“Over there,” the woman told her. “The Land Rover.”

Polly led the way down the sidewalk, her tank top wet at the breastbone, her silky biceps made wooden by her cargo. Behind her strode the redhead, pale and cool as marble, her ass looking awesome in a knee-length white sweater. Brian brought up the rear, lugging his lone plant and feeling, against his better instincts, less a man for it.

“This is nice of you,” said the woman.

“You bet,” Brian put in idiotically. “Part of the service.”

They stuffed the cans into the back of the Land Rover, Polly pondering the placement a lot longer than usual. “That oughta hold you,” she said at last, whacking one of the cans.

“Thanks.” The redhead smiled at Polly, then slipped behind the wheel and pulled the door shut.

“Remember,” Brian said, dropping his voice conspiratorially. “Keep ’em real wet. I know we’ve got a drought on, but they’ll die if you don’t.”

“I’ll do it at night,” she said, looking at both of them, “when the neighbors aren’t looking.”

He laughed. “There you go.”

“Thanks again.” She turned on the ignition.