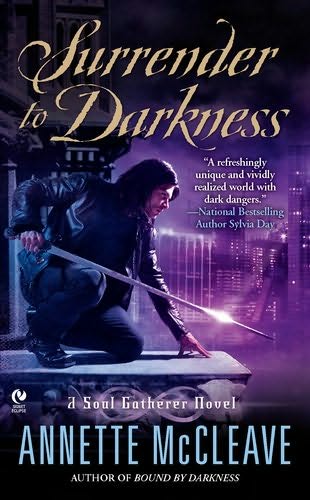 Table of Contents
Title Page
Copyright Page
Dedication
Acknowledgements
Chapter 1
Chapter 2
Chapter 3
Chapter 4
Chapter 5
Chapter 6
Chapter 7
Chapter 8
Chapter 9
Chapter 10
Chapter 11
Chapter 12
Chapter 13
Chapter 14
Chapter 15
Chapter 16
Chapter 17
Chapter 18
Chapter 19
Chapter 20
Chapter 21
GLOSSARY
Teaser chapter
Praise for
Drawn into Darkness
“Lachlan MacGregor looks like a rather hunky priest, but the four-hundred-year-old undead hero of McCleave’s entertaining paranormal romance debut is actually serving penance by gathering souls destined for heaven, saving them from demons…. Swords flash, spells are cast … but Rachel is game for anything as long as she can save her daughter and find true love. Readers will hope for sequels in which Emily grows up to be as feisty as Rachel and as powerful as Lachlan.”
—
Publishers Weekly
“This is a fabulously entertaining tale of demons, angels, and beings in between. The world building is unique and detailed, drawing the reader into an age-old battle between good and evil. The next installment will be eagerly anticipated.”
—
Romantic Times
“Fast-paced, dangerously sexy, and full of fun! Annette McCleave has created a world where good and evil fight for the possession of human souls, and love is found despite seemingly unbeatable odds.
Drawn into Darkness
will keep you turning pages and anxious for more!”
—
USA Today
bestselling author Kathryn Smith
“Deliciously dark and spellbinding! Annette McCleave weaves magic so powerful, you’ll believe in immortals.
Drawn into Darkness
is sexy, fast-paced, and intense. Readers, be warned—the Soul Gatherers sizzle on the page.”
—Allie Mackay
“A phenomenal debut! A refreshingly unique and vividly realized world with dark dangers and richly drawn characters. I loved every word. McCleave more than delivers!”
—National bestselling author Sylvia Day
ALSO BY ANNETTE McCLEAVE
Bound by Darkness
Drawn into Darkness 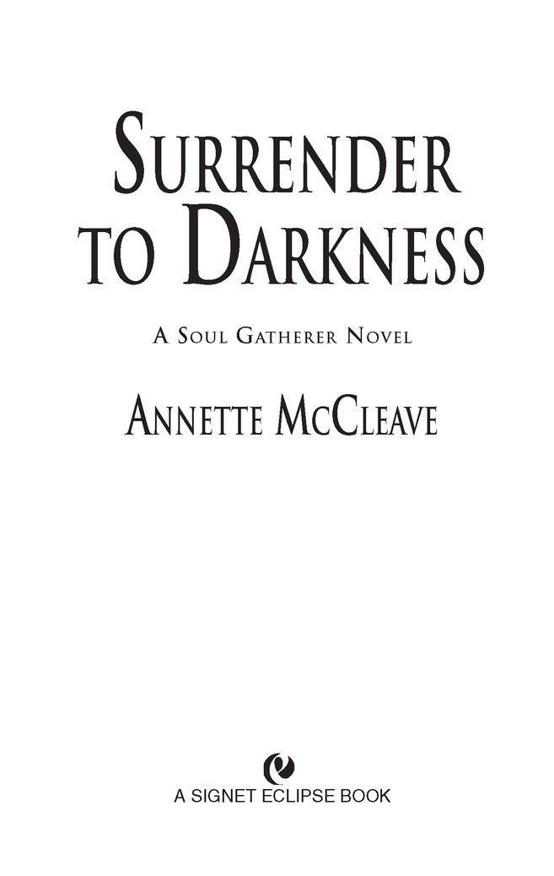 SIGNET ECLIPSE
Published by New American Library, a division of Penguin Group (USA) Inc., 375 Hudson Street, New York, New York 10014, USA
Penguin Group (Canada), 90 Eglinton Avenue East, Suite 700, Toronto, Ontario M4P 2Y3, Canada (a division of Pearson Penguin Canada Inc.)
Penguin Books Ltd., 80 Strand, London WC2R 0RL, England
Penguin Ireland, 25 St. Stephen’s Green, Dublin 2, Ireland (a division of Penguin Books Ltd.)
Penguin Group (Australia), 250 Camberwell Road, Camberwell, Victoria 3124, Australia (a division of Pearson Australia Group Pty. Ltd.)
Penguin Books India Pvt. Ltd., 11 Community Centre, Panchsheel Park, New Delhi - 110 017, India
Penguin Group (NZ), 67 Apollo Drive, Rosedale, North Shore 0632, New Zealand (a division of Pearson New Zealand Ltd.)
Penguin Books (South Africa) (Pty.) Ltd., 24 Sturdee Avenue, Rosebank, Johannesburg 2196, South Africa
Penguin Books Ltd., Registered Offices:
80 Strand, London WC2R 0RL, England
First published by Signet Eclipse, an imprint of New American Library,
a division of Penguin Group (USA) Inc.
First Printing, January 2011
Copyright © Annette McCleave, 2011
All rights reserved
eISBN : 978-1-101-47685-7
SIGNET ECLIPSE and logo are trademarks of Penguin Group (USA) Inc.
Without limiting the rights under copyright reserved above, no part of this publication may be reproduced, stored in or introduced into a retrieval system, or transmitted, in any form, or by any means (electronic, mechanical, photocopying, recording, or otherwise), without the prior written permission of both the copyright owner and the above publisher of this book.
PUBLISHER’S NOTE
This is a work of fiction. Names, characters, places, and incidents either are the product of the author’s imagination or are used fictitiously, and any resemblance to actual persons, living or dead, business establishments, events, or locales is entirely coincidental.
The publisher does not have any control over and does not assume any responsibility for author or third-party Web sites or their content.
The scanning, uploading, and distribution of this book via the Internet or via any other means without the permission of the publisher is illegal and punishable by law. Please purchase only authorized electronic editions, and do not participate in or encourage electronic piracy of copyrighted materials. Your support of the author’s rights is appreciated.

To Lise, Andree, and Mark, who have supported me in innumerable ways.
ACKNOWLEDGMENTS
It takes a village to produce a book, and I’d like to applaud all the wonderful people at NAL who’ve helped make my dreams reality—editors, copy editors, cover designers, marketing gurus, sales people, production staff, and beyond. Thank you.
To the friends who have offered me words of wisdom, sumptuous picnic lunches, and encouraging smiles during a difficult year—all I can say is you are the best. Really.
1
“W
e’re finally making some headway against the effects of the dark relics. São Paolo just reported their first rise in church attendance in seventeen months, and the survivors of that bus crash in Lima are singing their ‘We were saved by an angel’ story to the press.” Webster removed two red pushpins from his huge map of the world and replaced them with blue ones. “If you hadn’t screwed up in Rome, Murdoch, this would have been a positive week.”
Jamie Murdoch leaned against the big campaign desk and imagined a target painted on the other Soul Gatherer’s back. “I did not screw up. I told you, we were attacked by a pack of flesh-eating gradior demons.”
“Did the
cardinale
of the Protectorate end up in the hospital with multiple lacerations and a severe concussion?”
“You know he did.”
Webster turned to face him. “Then you screwed up.”
Murdoch’s hand involuntarily fisted.
“There are still far too many red pins on the map,” Stefan Wahlberg said. The plump mage pushed away from the bookcase to study the map in more detail. “Especially in Europe. Even with each city now protected by a principality angel, the number of demon nests continues to grow. We really need to find a better way to beat back the hordes.”
“Yes.” Lena sat forward on the couch. “We also need to find some way to save the humans who’ve suffered a havoc bite. Reports keep streaming in. The bastards drain them of energy, then leave them to die.”
“There is a way,” Stefan said. “But it’s a very difficult potion to brew, and it requires an ingredient so rare as to render it impractical. Our best option remains destroying the demon nests.”
“I agree.” Webster’s gaze returned to the map. “Problem is we’re outnumbered. The teams we’ve placed around the world are struggling.”
“We’re ramping up the training,” Murdoch reminded them, ignoring the restless urge that filled his chest every time the talk turned to battle. “MacGregor’s putting thirty-two students through their paces this term, and with minor tweaks to the program, he’s confident he can double that number on the next round.”
“We’ll still be behind the eight ball. We need something game changing, like a weapon.”
“A weapon?” asked Lena. She tugged the elastic band out of her hair, gathered up the strands that had come loose, and refastened her ponytail. “What kind of weapon?”
“Anything that evens the odds,” Webster responded.
“I’ve read all the grimoires we’ve acquired, cover to cover,” Stefan said. “No such weapon exists.”
“Don’t be so sure,” said Lena.
Murdoch glanced at her. Miracles and churchgoing habits didn’t excite him. But weapons did. “Do you know something?”
“Back when I had my amulet, I stumbled across an artifact radiating some serious dark magic. Part of a private collection in Japan.”
“What makes you think it was a weapon?” Murdoch asked.
“The owner told me it could single-handedly swamp the forces of evil.”
Webster favored his lovely girlfriend with a raised brow. “And you didn’t think that was worth mentioning until now?”
She shrugged. “A few months after I sensed it, it stopped giving off vibes. The owner has since died, so I’m not even sure it can be tracked down.”
“The owner used those exact words?” Stefan asked, frowning.
“Swamp the forces of evil?”
“I think so,” Lena said. “Why?”
“A century or so ago, there were rumors of a sixth Ignoble. I’ve seen similar phrasing in the parchments that mention it.”
“There’s a sixth dark relic?”
Stefan waved his hand dismissively. “The Romany Council investigated the rumors. No truth to any of them.”
“I still think it’s worth looking into,” Webster said. He turned to Lena. “The owner have any family you could contact?”
“A daughter, Kiyoko. But I must warn you, I’ve known her for years and never once heard her mention the relic.”
“Let’s send someone over there to check it out. Someone stubborn, someone who won’t give up easily.” Webster smiled broadly. “That would be you, Murdoch.”
“Me?” Murdoch blinked. “I’m headed to Johannesburg, remember? Now that we’re going on the offensive, fighting the demons in the trenches, we all agreed there was no better place for me to be than in the thick of battle.”
“That was before you put the
cardinale
in intensive care.”
“Come on. The team needs a seasoned commander. Who else is qualified?”
“Atheborne.”
“No bloody way.” Murdoch surged away from the desk, his face hot. Atheborne was a highly skilled warrior, and he’d slain dozens of demons since his fateful landing at Omaha Beach, but he didn’t have Murdoch’s experience. “I’m the senior Gatherer. It’s my assignment.”
ADS
15.4Mb size Format: txt, pdf, ePub