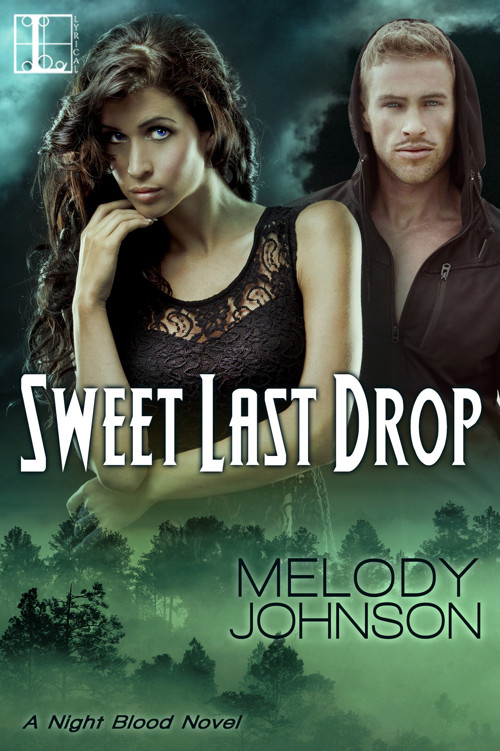 Cassidy DiRocco knows the dark side intimately—as a crime reporter in New York City, she sees it every day. But since she discovered that she’s a night blood, her power and potential has led the dark right to her doorway. With her brother missing and no one remembering he exists, she makes a deal with Dominic Lysander, the fascinating Master Vampire of New York, to find him.

Dominic needs the help of Bex, another master vampire, to keep peace in the city, so he sends Cassidy to a remote, woodsy town upstate to convince her—assuming she survives long enough. A series of vicious “animal attacks” after dark tells Cassidy there’s more to Bex and her coven than anyone’s saying. That goes double for fellow night blood Ian Walker, the tall, blond animal tracker who’s supposed to be her ally. Walker may be hot-blooded and hard-bodied, but he’s hiding something too. If Cassidy wants the truth, she’ll have to squeeze it out herself… every last drop.

To the extent that the image or images on the cover of this book depict a person or persons, such person or persons are merely models, and are not intended to portray any character or characters featured in the book.

To my parents, Nancy and Leonard Johnson, for supporting my excitement to move down south, even though you probably thought quitting my day job for year-round summer and unlimited beach access was poor decision-making. As usual—in my writing, career, and life in general—you always have my back, whether I’m five minutes or five states away. I was brave enough to fly because you gave me the wings.

To Derek Bradley, for making a new home with me in sunshine and sand. Thank you for scouting the apartment, demanding different movers, hulking the furniture three flights, hanging the picture gallery, and taking care of business on the daily. You are an unwavering anchor, and this journey is immeasurably more exciting because I’m taking it with you.

To Carl Drake, for being my go-to IT guy. Without you, I’d still be stuck in the stone ages. Thank you for always pointing me in the right direction, recommending the best software, fixing my code every time I hit a wall, and trying to solve the domain redirect mystery. I finally have a website that looks great and actually works, and I don’t know which is more awesome.

To Margaret Johnston, for being my first ever Beta reader! Your feedback and insights were invaluable. I can’t truly express how grateful I am for the time and effort you dedicated to reading and revising this manuscript, not once but twice! Thank you so much for your help and friendship.

And last, but never least, to my friends, family, and followers who bought Book One, The City Beneath. Thank you for your support. Your words of enthusiasm, encouragement, and praise keep my creative flame burning bright. I’m so glad you enjoyed the first installment enough to continue reading the series. Taking you on this adventure means more than you’ll ever know.

Vampires Bite in the Big Apple- notes from draft 4

Nightmares are supposed to stay in dreams, but for the past three weeks, absolutely nothing, not even my dreams, are as they’re supposed to be. Reality is the nightmare. When murderers, rapists, thieves, and gangs were my choice topics to report, I was sickened and unendurably angry by what people were capable of doing to other people. Now, I’m just sickened by what I’m capable of, and I can’t sleep at all.

After sunset I see vampires lurking in every shadow, pressing against every doorway, committing every murder. Reality is further from anything I could have imagined, and I feel helpless against the enormity of Dominic’s reach. What’s the point of breaking my lease when Dominic will just demand entrance into my new apartment? Who can I confide in about my life after dark without risking their memory, or worse, their life?

The one question that haunts me most is ironically one that I struggled to answer long before stumbling upon Dominic’s existence. It haunted me after my parents died and I fought Percocet addiction—how long will I search for the answers before buckling under the unbearable truth that my efforts were futile from the start?

My brother disappeared three weeks ago. In another three months, will the agony of Nathan’s absence still drive my efforts or drive me insane? When do I draw the line between hope and insanity—in another three years? Unfortunately for me and everyone’s peace of mind, I don’t think there are lines for love. Love is already insane, so the only answer is to drive toward the truth….

The bus ride from The Big Apple to Erin, New York gradually descended from the metropolitan area to suburbs, from suburbs to woodsy small towns, and then to nothing but fields and sheds and, of course, cows. I’d never seen so many cows in my life. Considering I’d never actually seen a cow in person, I suppose that wasn’t much of a statement, but it certainly seemed like Erin had an over-abundance of them. Their mooing reminded me of Dominic’s night blood-and-hamburger metaphor when he’d described how my blood tasted. “You are a rare dish,” he’d said, and I’d been terrified by his attraction.

I was still terrified of Dominic, attraction or not, but terror could only hold so much immediacy for so long, especially when the object of my terror was being relatively civil. Despite his consuming responsibilities as Master Vampire of New York City, Dominic had found time to visit me on numerous occasions at the hospital while I recovered from our battle against the rebel vampires. He visited me at home once I’d been released from the hospital. He visited me in the office when I returned to work and outside the office at every starlit opportunity. When he came calling, he was always fully fed, completely gorgeous, and the ultimate gentleman.

I knew better than to believe the illusion.

In his infinite patience, I think Dominic was biding his time, and I suspected it had everything to do with this very road trip to Erin, New York, Ian Walker’s hometown and the resting place of Erin’s abundantly powerful coven Master, Bex. Dominic’s Leveling was approaching in two short weeks, and he’d need all the power and allies at his back as possible to survive the one night he’d be as weak and vulnerable to death as any human.

Dominic, however, wasn’t the only man in my life with ulterior motives, although Ian Walker had been decidedly less patient for this visit.

“I can’t wait to see you, darlin’,” Walker had said at least once per conversation during the daily phone calls we’d enjoyed for the past three weeks. “I miss you.”

Walker’s voice had deepened salaciously, reminding me of that one night in my office. He’d lifted me onto my desk, and his strong hands had touched me in places I’d never thought I could feel again. I would have found his persistence coming from someone else nauseating, but between all the
darlin’
s and
ma’am
s, we shared an indelible bond that went beyond incorrigible flirtation.

Walker and I were two of the rare humans who had night blood, a hereditary gene necessary to complete the transformation into a vampire, but just because I had the potential to become a vampire didn’t mean I wanted to become one. That was a main point of contention between Dominic and me, albeit one of our more vehement disagreements. Walker, on the other hand, understood and shared my opinion on the matter. He was the only person who could relate to the danger of living with the knowledge that vampires existed.

Despite everything we had in common, I remained skeptical of both Walker and my feelings for him. We’d only physically known each other for one week. How well could I legitimately come to know a person in such a short time? But when I looked back at the week we’d shared and survived, I swallowed my doubts and forced myself to say the words because they were true.

And now, after three weeks of nothing but phone time with Walker, I had finally arrived in Erin, New York for what should have been a vacation from all those demons back in the city. Less than twenty-four hours into our reunion, however, and Walker and I weren’t any closer to putting the moves on each other. He’d barely had time to give me a proper tour of the town before we were once again staring at a body.

I’d raised my eyebrows at the description, both from its nostalgia and its telling timeframe. Foul play after dark meant only one thing.

Although I’d left the city on vampire business in addition to my business with Walker, I’d especially looked forward to leaving behind a recent stretch of murders. Detective Greta Wahl and Officer Harroway—my personal friends and two of NYPD’s finest—were recovering evidence and leads at a snail’s pace; considering their slow, nearly backwards progress on that particular investigation, I’d still be able to report their findings when I returned to the city next week. I was due for a reprieve from the usual “doom and gloom,” as my boss often referred to my articles, but gazing down at Lydia Bowser, I realized that doom and gloom had, once again, found me.

“The police already called it quits for today. You should have told them the media was coming. It’s not as if I can interview the victim.” I crossed my arms and glared at Walker. Grief and fear didn’t look good on me, but I’d wear sarcasm any day of the week.

Walker looked up from a marker he was inspecting. He might not possess Dominic’s mind control abilities, but when his eyes met mine, I had to physically restrain myself from stepping toward him. A smirk tugged at his lips. “Knowing that the media was coming would have spooked them for sure. You can interview the coroner. He’ll arrive in a few minutes to officially pronounce time of death and take her body to the morgue.”

Mortal Heart by Robin LaFevers
The Warden by Madeleine Roux
Something Beautiful (Beautiful #3) by Jamie McGuire
Heartbeat by Faith Sullivan
Lambrusco by Ellen Cooney
The Secret of the Chalisa by Subhanand, Dr. Runjhun Saxena
Death Among the Sunbathers by E.R. Punshon
A Date of Godlike Proportions (The Blooming Goddess Trilogy Book 2.5) by Darling, Tellulah
Chianti Classico by Coralie Hughes Jensen
LC 04 - Skeleton Crew by Beverly Connor