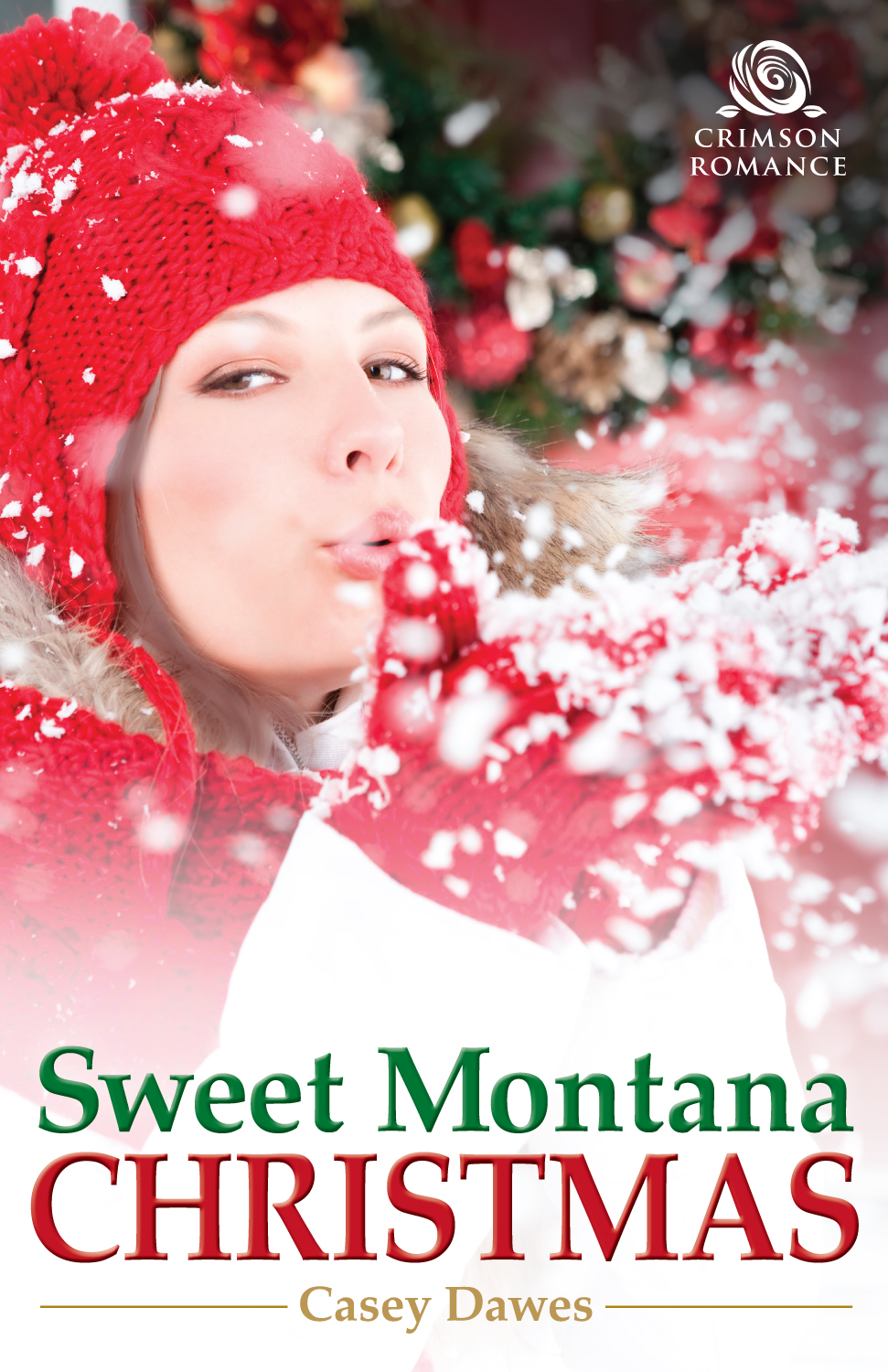 This book is dedicated to the hard-working men and women who keep our airports safe and to the chocolatiers who make our lives a little sweeter.

After six months as a public safety officer at Missoula International Airport, something had to give for Zach Crippin. He couldn't be stuck in Montana for the rest of his airport career.

He checked his gear bag one more time before he threw it in the locker for the start of his ten-hour shift. A quick look in the mirror showed him his uniform was pressed and tidy and his streaked blond hair was neatly combed. Almost time for a haircut. He had to look and act sharpâbe at the top of his game.

Couldn't the chief see he was ready for a leadership role? Or was the stupid mistake he'd made in Denver still holding him back?

Â “All quiet?” he asked as he walked into the break room.

“Tony's patrolling the perimeter, and Jim's out front making nice with the last of the Christmas travelers,” Pat Neucomb said, looking up from the training manual he was reading.

“Once all the festivities have passed, they're ready to get home,” Zach agreed, trying to make small talk. It wasn't one of his strengths. Especially with people he didn't like.

And he didn't like Pat. Not that Pat wasn't a nice guy. He was too nice, the kind other guys like to have around.

A talent Zach didn't have, but he was working on it. He had two rules to constantly remember: be nice to the other guys, and don't get entangled with a woman in any serious manner.

“Yep.” His capacity for chitchat exhausted, Zach headed for the training room.

Working at the airport was 99 percent routine, lots of checking, drills, with a few moments a month of adrenaline-rushing crises. The team covered all the services that other airports broke out into separate units: fire, medical, police, and airfield operations. The variety was interesting, but he ached to get back to a bigger airport where he had a real chance at advancement.

Then he could begin fixing the other thing that had gone wrong in Denver. Oh, not with Erinâshe'd already moved onâbut with a new woman who had a little more patience with his work.

He clicked the icon for federal security updates. With all the different disciplines the airport required, the training was constant. After a half hour of brushing up on the latest government regulations, he switched it off with relief. Dry as the dirt on his parents' Iowa farm after a month without rain. Who wrote this crap? Couldn't they liven it up a little? Even cartoons would be better.

Â After checking his appearance one more time, he headed out to the small brick lobby, a smile on his face, and a gun on his hip. Although little happened, he was helping people feel safer simply by being there.

He walked back and forth through the lobby, watching the surge of travelers deplane, stand around for their baggage, and then dissipate. He always wondered what out-of-towners thought of the mounted animals in display cases and Native American decorations that hung on the high walls of the terminal.

Two young women, college students probably, gave him big smiles as they walked to baggage claim. An older woman asked his assistance to locate her gate. An hour before his shift ended, he reunited a young boy with his mother.

He'd miss this interaction with the public at a bigger airport.

“Um ...” A woman with a slim face and brown curls tumbling all around it fidgeted with her two suitcases, three shopping bags, and oversized purse in front of him.

Why is it some women need so much luggage?

She was about five six, and, while she wasn't beautiful, her face and figure reminded him of one of Santa's elves. An elf with curves in all the right places.

She also had the most delicious set of lips he'd seen in a while. What was it one of his trainers had called them?

Bee-stung. Plump, pouty, and ready to be kissed.

“Excuse me?” A frown drew her perfectly arched eyebrows together.

He ushered his previous thoughts from his mind.

Great. Driving around looking for a lost car in the parking lot was his least favorite chore. Most of the time, the car was right where the traveler left it. Maybe he could pawn it off on Tony, who should arrive any moment.

But she was too cute to let anyone else near her. While Zach wasn't looking for a serious entanglement, a fling might help while away the winter hours.

She was still frowning.

“Where did you leave it?” He'd best be patient. Normally it was oldsters having senior moments who needed help finding their cars, not women his age. This was a great opportunity.

Those lips were begging for a kiss.

“And you've already looked out thereâwhere you left it?”

“I looked everywhere.” The corners of her mouth turned down.

Maybe she wasn't the right one for a lighthearted friendship with benefits.

Creaking leather and the jangle of keys accompanied the footsteps coming up behind him.

“Do you want me to relieve you?” Tony asked Zach. “Or would you rather I take the young lady to find her car?”

Those full lips turned upward, and Zach swore she batted her eyes.

“I'd appreciate if
someone
will help me find it. That
is
one of the services you all provide, isn't it?” A faint hint of the South honeyed her words.

Brother
. He should leave her to woman-hungry Tony, but pawning off car-finding duty on someone else would detract from his effort to show he was a team player.

“You're up for public presence duty,” Zach said with a smile to soften the words. Turning away from his teammate, he said, “If you'll follow me, I'll help you find your car.”

“My name's Sue Anne Devereaux.” Her heels beat a rapid tempo on the floor. “You are?”

“I do appreciate your help, Mr. Crippin, but could you slow down just a tad? I have all these things to carry.”

Damn it.
In his rush to get the chore over, he'd acted like a jerk.

“Let me help you.” He reached for the shopping bags.

“Why, thank you.” The sugar was back in her voice as she handed him the shopping bags. And the small suitcase. “I think I can handle the rest. But can you still slow down?”

“Sure.” He should make small talk, set her at ease. At least that's what one of his training programs had said. “Where did you fly in from?”

He'd gone several strides before realizing she was no longer next to him. He turned and backtracked to where she was still standing.

Â “Do you think we can find it?” The worried frown was back. “I don't ordinarily lose things. I mean, well, I do, but nothing as big as a car.”

His rescue gene, the one that had impelled him into public service in the first place, kicked in. She looked like she needed a knight, even one who'd started out life as an awkward chubby kid.

She didn't say anything else until her stuff was stowed in the back of his patrol car.

“Where do you think you left it?”

He released the brake and pulled away from the curb. She seemed so unsure one moment and confident the next. Which one was the real person?

Oh well, he'd probably never run into her again. Too bad. He'd like to find out what those lips tasted like.

“
I
drive an old Subaru Outback. That's not it. Obviously.”

The girl he'd had a crush on in junior high had used that exact same tone when she'd turned him down for a date.

Miss Sue Anne Devereaux, no doubt a former debutante, was off the possibilities list
forever
.

He steeled himself for the next fifteen minutesâthe time it took him to tour both parking lots.

“Okay. Let's take it row by row.” The sun set early in January, and the light was already fading. He started the car down the well-lit pavement.

How did someone misplace a car?

His ex, Erin, would never have lost her car. She had been a confident nurse who knew what she wantedâa ring on her finger, a house in the burbs, and enough income to be a stay-at-home mom.

He'd almost made it happen for her.

He drove slowly up and down the rows, stewing about their breakup, ready for the ride to end.

Sue Anne couldn't wait to get out of the patrol car. Maybe the search would have been more fun with the other cop. This one was way too serious. He drove with a frown on his face, looking like he'd eaten a full bowl of lima beans.

If she ever met someone who liked lima beans, she'd steer clear.

She'd obviously snapped him out a full-bore daydream.

A hint of a smile turned up the corner of his lips. “Planning on feeding me some if I find your car?”

“Sure. My mom used to make themânot too mushy, lots of salt and pepper, and drowned in butter.” His lips curled up a little more. “But I like chocolate better, if that's what you're offering.”

Was he
flirting
with her?

He
was
kinda cute, in a cop sort of way. But then there was that grumpy side of him. That must be the part that liked that disgusting food. Those little pods had to interfere with endorphins somehow.