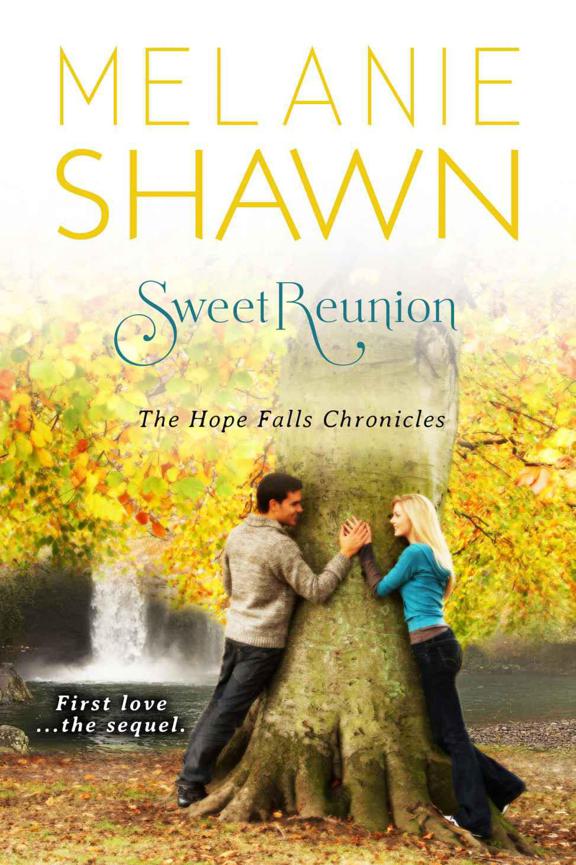 All rights reserved. This copy is intended
for the original purchaser of this book. No part of this may be used or reproduced
in any manner whatsoever without permission in writing from Melanie Shawn.
Exceptions are limited to reviewers who may use brief quotations in connection
with reviews. No part of this book can be transmitted, scanned, reproduced, or
distributed in any written or electronic form without written permission from
Melanie Shawn.

This book is a work of fiction.
Places, names, characters and events are either products of the author’s
imagination or used fictitiously. Any resemblance to actual events, locations,
or persons, living or dead, is purely coincidental and not intended by the
author.

Many thanks go out to the
following people, whose help has been incredibly valuable in getting this book
ready to be released:  Diane Roza and Bonnie de Jonge, for their excellent and
selflessly given editing and proofreading services, and Kim, Jennifer, and
Abigail at The Killion group, for their graphic design and formatting prowess!
Thank you, ladies!

First and foremost, to my
best friend in the world, my writing partner and little sis, Shawna
Wesley-Roza! You are the best sister I could ever have hoped to be blessed
with. Your strength in the face of any adversity is always inspiring. I LOVE
YOU, SISTAH!

Next, to my awesome
parents, John and Bonnie de Jonge. Shawna and I would never have found our
calling as Romance authors if we didn't grow up with such an awesome example of
what True Love really looks like! Your support, love, and humor have been
unwavering all of our lives. Thank you!

I couldn't leave out my
amazing dog, Hercules. Mommy loves you, Hercy-man!

Lastly, to my niece and
nephew. You guys ROCK! You are the most creative, hilarious, smart, and loving
kids ever. Game night soon, K? :D

First, my sister and
writing partner, Melanie de Jonge, thank you for always being there for me. You
are such an incredible, talented, funny, intelligent and beautiful person. I am
so lucky and blessed to be your sister. My parents John and Bonnie de Jonge,
thank you for your unconditional love and support, I don't know what I would do
without you two. You are both not only the BEST parents a girl could have you
are also the Best Grandparents Ever!

Thank you to my son Joey
and my daughter Mya Papaya, two of the most amazing people on the planet, your
faith in me gives me the courage and strength to face anything! You're both my
heart and soul. Being your mom is the best thing in the world.

And lastly thank you to my
hero, man-genius, day-brightener, best friend, personal comedian, and husband
Tony Roza. No matter what life throws at us we just keep swimming, swimming,
swimming! I love you baby!

Amanda Jacobs was truly
alone for the first time in her entire life.

I mean, sure, she had been
alone for a few minutes before. A few hours. Maybe as long as a few days,
although she’d be hard pressed to remember when. But that was different. This
was the first time in her life that she was really and truly completely alone.
She had no one in the world. There was no one to take care of her, and - in
what was even a more melancholy notion for someone with Amanda’s nurturing
spirit - no one for her to take care of.

Well, that wasn’t entirely
true. She did have her black lab, Teddy. Her father had bought Teddy for her on
her 16th birthday. It had been like a moment from a movie, her father carrying
the exuberant puppy to her in a basket, the bright red silken bow tied around
his neck a stark and lovely contrast with his equally silken raven black fur.
Amanda had snatched the wriggling bundle up and held him close to her chest as
he licked every inch of her laughing face, and they had been inseparable ever
since.

Now it was 11 years later,
and his fur was not as silky nor as deep a shade of black. In fact, it was
downright gray around the muzzle. The youthful exuberance he had exhibited on
that day of their introduction had also faded through the years, much like the
hue of his coat. Now his favorite activity was not to wriggle jubilantly in her
arms but rather to sleep contentedly by her feet.

Amanda bent over and stroked
Teddy’s head. “Who would have imagined on the day Daddy gave you to me,” she
ruminated aloud to the pooch, “that you would actually outlive him?”

Tears sprang to her eyes.
Her father, the indomitable Parker Jacobs, was really dead. It was still so
hard to wrap her mind around it. After all, it had only been a little under a
week since it had happened. But to Amanda’s grief-stricken consciousness, it
didn’t seem possible that the amount of time that had elapsed could possibly be
a factor in how surreal the fact of her father’s passing felt. She didn’t
believe it would feel any different 6 years after the fact than it felt 6 days
after.

Her father had been a larger
than life figure. His booming voice filled a room, heck, to Amanda it seemed
that it filled the whole forest! He had been the owner and operator of their
family business, Mountain Ridge Outdoor Adventures, in Mountain Ridge County,
California. He was the mayor of their small town, Hope Falls.

Parker Jacobs had loved the
quaint mountain village of 5,000 that he had called home for his entire life,
and had passed that love along to Amanda. Hope Falls was an idyllic place, lush
with deep green pine trees and dotted with colorful aspens in shades of
brilliant yellow and shocking red. The heart of the town was Downtown Main
Street, a five block stretch of small storefront businesses, lined on each side
with wooden, almost porch-like sidewalks.

Downtown Main Street was
where many of Amanda's favorite places were. Sue Ann's Cafe was there, which
was the main eatery in town. The proprietress, Sue Ann Perkins, was a close
friend of the family, and Amanda had actually waitressed there for a couple of
summers when she was home from college.

Then there was Read Between
the Lines, the used bookstore where she had spent many long afternoons perusing
the books, and simply enjoying the smell of the pages and the feel of the paper
underneath her fingers.

There was the Hope Falls
Twin Cinemas, the tiny two-theater movie house which was Hope Falls' only real
entertainment venue. The proprietors had, in a very savvy move, begun showing
independent films on weekends to lure up the artsy crowd from Lake Tahoe. They
showed the big blockbusters during the week, to attract the local clientele, and
on weekends they devoted one of the two theaters to showing art house movies
that were making a big splash in metro areas, and that small film buffs from
Lake Tahoe would have otherwise had to drive all the way to San Francisco to
see. They then advertised in the Tahoe Daily Tribune to lure the artsy citizens
further into the wilderness. This, of course, was also great for Sue Ann's and
other specialty food places, such as Two Scoops, the ice cream shop.

In the several blocks
surrounding Downtown Main Street in all directions were all the buildings that
made the town function – City Hall and the municipal complex, the library,
schools, churches, parks, the community center. Spreading out past the main
part of the town were neighborhoods filled with homes that contained the true
heart of Hope Falls – its people.

They had been the real
reason that Parker had been so passionate about leading the town as its mayor –
and more than just the mayor, really – he was the city’s unofficial adviser,
known throughout town for his wisdom and compassion. His nickname was the King
Solomon of Hope Falls.

There had been countless
nights throughout Amanda’s childhood that she had awoken to the low, comforting
rumblings of his voice, and tiptoed to the top of the stairs to see him talking
in his even, reasonable manner to a crying mother with toddler in tow or a
pale, drawn rancher sitting at their kitchen table with his hat in his lap. The
stress of whatever situation had brought them to the Jacobs home in the wee
hours of the morning would always be evident on their face, but what would
always be equally evident was another common thread among anyone who sought
counsel from Parker Jacobs - relief. Safety. Clarity. All of those things would
come to you in spades as Parker clearly and compassionately outlined the next
steps that needed to be taken.

And Amanda got it, she
understood 100%. Just because she was Parker’s daughter didn’t mean that she
didn’t go to him with her problems, that she didn’t benefit from his keen
insights. In fact, she doubted that she had ever made a big life decision that
didn’t follow the path that Parker had recommended. Why would she? He was the
wisest man she knew.

He was the wisest man anyone
in Hope Falls knew. His shoes could never be filled. His responsibilities,
though? Those had to be filled. There was no choice.

Someone had to run Mountain
Ridge Outdoor Adventures. And, since it was a family business and she was the
only surviving family member, that responsibility would fall to her. There were
so many activities going on at the resort on any given day. There was hiking,
horseback riding, ziplining, white water rafting and kayaking...the list went
on. And that was only the activities they offered during the summer season,
which (Thank Almighty Lord!) was drawing to a close, this being the end of
September. She would have almost six weeks to get her ducks in a row before
they opened again for the winter season. She had to come up with a plan, and to
familiarize herself with the day to day responsibilities of running the place.
She needed to meet with each of the staff members, and establish herself as the
new authority figure, as many of them still just thought of her as “little
Amanda.”   Parker's shoes were, indeed, going to be big ones to fill.

Adding to her dilemma with
the staff was the fact that Parker had actually died on the property, while
working. He had been high on a ladder, doing some routine repairs. Nothing he
hadn't done a million times before. But this particular time, in what was nothing
more than a cruel twist of fate embodied in a fluke accident, his foot had
landed wrong on one of the high rungs as he was climbing down, his ankle had
gotten twisted up in the ladder as he fell, and his life had ended when he hit
the ground.

Now a lot of the staff were
traumatized, not only from losing Parker, but by the fact that it had happened
so suddenly and unexpectedly, and in a place that was so familiar and
comfortable to them. Amanda needed to figure out a way to gain their confidence
as a leader, and to re-instill in them the sense of loyalty, home, and
community that had always been the best fringe benefit of working at Mountain
Ridge Outdoor Adventures.

Forever by Rebecca Royce
Falling for the Boss by Matthews, Erica
A Walk with Jane Austen by Lori Smith
Overnight by Adele Griffin
Caging the Wolf (Snowdonia Wolves) by Sofia Grey
Moons' Dreaming (Children of the Rock) by Krause, Marguerite, Sizemore, Susan
Love Amid the Ashes by Mesu Andrews
Physical Therapy by Aysel Quinn
Mr. Wrong After All by Hazel Mills
Pretty Kitty by Desiree Holt