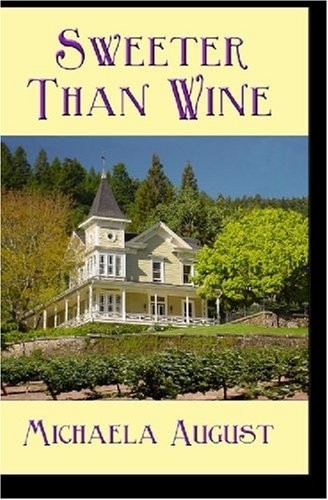 Electronic rights reserved by Awe-Struck E-Books, all other rights reserved
by author. The reproduction or other use of any part of this publication without the prior
written consent of the rights holder is an infringement of the copyright law.

This book is dedicated to the memories of Elisabeth Dorette Hüschens, beloved
Candy-Oma
, and Raymond and Margaret Huntsman, loving parents.

The Author gratefully acknowledges the help of the following people and organizations in writing this novel:

Fritz Welss for giving Siegfried such colorful invective when dealing with automobiles;

Elke Welss Crabbe, Esq. for legal advice on inheritance and property laws above and beyond the call of sisterly duty;

Samantha Hassler of Karlsruhe, Germany, for proofing and correcting the German passages, and sending photos of Alsace;

Jim Bundschu and the tasting room staff at the Gundlach Bundschu Winery;

Tom Martini and the staff of Martini & Prati Winery, for giving a special tour of their winery;

Marcia Kunde Mickelson and staff of the Kunde Estate Winery;

Roxane Wilson at the Historical Annex of the Sonoma County Library;

the library staff at the Healdsburg Wine Library;

Duncan Stuart, Western Region Sales Manager at the Alderbrook Winery in Healdsburg, Calif., for helpful tips on the proper casking and maintenance of wine during the aging process;

Sally Norton for help on period clothing, jewelery, and etiquette;

all the beta readers, who provided invaluable fine-tuning assistance;

the Spellbinders for cross-genre critiquing

Mary Elizabeth Sperry, Publishing and Promotion Services of the US Catholic Conference, for corrections to the manuscript and permission to reprint excerpts from
The Roman Missal
.

Let him kiss me with the kisses of his mouth:
for thy love is better than wine!

Siegfried dozed, his cheek pressed against the cold, damp window of a jolting
railway carriage, dreaming of food the way poor men dream of riches.

As the train squealed to a halt, he started awake, blinking and squinting
through the fog on the inside of the windows. Raindrops marched like weary
soldiers down the outside of the glass.

He buttoned his wool greatcoat and stood up cautiously, testing his leg to see
if it would bear his weight. It did, but it took most of his strength to haul his
knapsack down from the metal shelf above his seat and wait patiently for the aisle
to clear. He had not eaten for two days, not since that last meager breakfast of
toast and thin tea at the military hospital near Heidelberg.

It seemed as if he had been hungry forever. Food had been sometimes scarce
or horrible at the Front. In Germany, since the Allies had begun a blockade in
order to force the chaotic, newly democratic government to sign the surrender, it
had been in short supply for everyone.

But it should not have taken two whole days to travel the short distance. He
had been stopped for over a day at the border. Before the Great War, there had
been no border between Germany and Alsace.

I will be home soon. I will be warm and dry. My
Vater
will feed
me.

He had sustained himself on such promises for years. He could survive fifteen
more minutes.

He walked a little unsteadily onto the station platform, wincing at the twinges of
pain in his thigh. The chilly air, fresh after the train's thick atmosphere of wet wool,
unwashed bodies, and coal smoke, revived him a bit.

An old man jostled him and began to apologize, then recognized Siegfried's
field gray uniform and scowled before muttering darkly and turning away.

The space around Siegfried grew steadily wider as the other passengers
greeted family and walked briskly into town. In a few minutes, he was completely
alone. Across the wide cobbled square of the
Bahnhofplatz
, red-roofed,
half-timbered houses closed their shutters against the dying storm. Gray misty rain
blurred all the edges, but he knew every line, every detail.

He was home, at last, after four-and-a-half years in Hell.

His knapsack became too heavy to hold. He lowered it to the clean-swept
platform, leaning it against a tub planted with geraniums. Siegfried averted his
gaze from the scarlet blossoms scattered like splashes of blood among the
patterned green leaves. He must not think of what it had been like. He was home.
There was no blood here. But the smell of the trenches returned to him, the ripe
odors of violated earth, decomposing flesh, sulfur, and cigarette smoke.

His stomach made a low, pained sound, not fierce enough to be called a
growl. Fifteen minutes passed, then twenty. Father and his beloved Daimler never
appeared. Had he not received the telegram? Sending it had taken Siegfried's last
few
Marks
.

If Father didn't come to pick him up, then Siegfried would have to walk home
on an empty stomach. He checked his pockets, but no coins had miraculously
appeared. He couldn't even afford to buy himself a bread roll. He swayed at the
thought, turning the motion into a stiff bow as an old woman and a little girl in a
schlumpkapf
walked by. The grandmother's silver hair was tucked securely
under a close-fitting hat, her black umbrella held at a precise angle. She ignored
him utterly and he flinched, knowing how he must appear to her, skinny and
ragged in the uniform of the defeated Enemy.

At least his comrades, the ones who had not deserted to the French, had
fallen honorably before they could be considered traitors by their neighbors.
Siegfried envied them their peaceful rest, secure in the knowledge they had
defended their
Heimat
, their homeland, with their lives. He had come home
to find it a different country. French territory.

The cathedral bell tolled one o'clock, the deep, mellow sound echoing from the
walls of the town's close-packed houses. Siegfried shifted uneasily, watching as
the rain changed from a sullen trickle to a hard downpour.

It's only four miles,
he cheered himself.
You used to be able to walk
to Schlettstat and back in an afternoon.

He set off through the cramped, winding streets, heading for the western gate,
trying to ignore the garlicky scent of frying
bratwurst
wafting from the cafés,
trying to stifle his resentment. French Alsace did not want for food like Germany
did.

He heard his name called as he neared the Gothic bulk of the Cathedral of
Saint George. Startled, he saw a neighbor waving at him from the entrance of a
nearby
Winstub
.

Siegfried limped quickly over to stand in the doorway, grateful to be out of the
rain. "Just now,
Herr
Bauer." He dropped his soaking knapsack with a sigh.
He shook the older man's hand. "How are you? And
Frau
Bauer?"

"She was very sick with the influenza. But she is well now, thank God, not like-
-" Bauer's face fell. "We were so sorry when your dear mother passed away. She
was such a good neighbor, for an American." He patted Siegfried's wrist with
clumsy sympathy.

A sudden unwelcome stab of tears ambushed Siegfried.
Mutti
. He had
not even known she was ill until the black-bordered letter arrived at the
hospital.

Bauer released his hand and, after an embarrassed cough, added, "We were
grateful for your letter about Jürgen. He was so proud to serve. Not like those
Frog-lovers, dancing in the streets because--"

"Jürgen was a brave soldier. He did his duty with honor," he said, suppressing
grief and guilt. At least Jürgen had died before seeing his sacrifice rendered futile.
"I wish he could have been here instead of me."

"No, no,
Herr
Rodernwiller," Bauer protested, shocked. "Please, may I
buy you a cup of wine?" At Siegfried's hesitation he said, "Please. I insist!"

Siegfried followed the old farmer into the tavern, giddy from the scents of
spilled beer, onions, and bacon, almost thick enough to chew. Almost...The plump
barmaid brushed past, and Siegfried had to wrestle down a powerful impulse to
seize the plate of fried potatoes she carried and cram them into his mouth.
Perhaps Herr Bauer would...?

No. Siegfried could not, would not, beg a meal from a man whose son he had
so miserably failed.

Once they were seated on benches at a long wooden table, the barmaid came
by with a blue-glazed pottery wine pitcher and two matching cups. As she placed
them on the table she gave Siegfried a long, cold stare. Unsmiling, she accepted
Bauer's payment.

Siegfried poured for them both, inhaled the fragrance of fresh greenish-gold
Sylvaner, and raised his cup in a toast. "To the Fatherland," he said ironically, and
drank, floating on the taste of sweet summer fruit. The wine warmed his belly,
masking the emptiness there. "What will become of us?"

"We will learn to be Frenchmen, and drink to
La Belle Patrie
," replied
Bauer. Then he spat on the immaculate floor.

Bauer's farm wagon was old, and drawn by an even older horse, but Siegfried
gratefully accepted a ride. The horse plodded along the cobbled streets under
graceful wrought-iron signs advertising bakeries, tailor shops, and hotels.

Siegfried nervously eyed the multitude of shuttered windows, shoulders tensed
against the threat of sniper fire. He told himself firmly,
I am home now.
It
was a relief to broach the Western Gate and head out on a muddy road into the
open countryside, leaving the rough stones of the ancient Witches' Tower looming
behind, its square top lost in the lowering clouds.

Siegfried thrust his hands deeply into his greatcoat pockets, regretting the lost
warmth of the
Winstub
. The faint odor of onions clung to the damp wool like
the perfume of an unfaithful lover. After another half-mile the rain lessened to a
drizzle and Siegfried ventured a remark on the weather.

"Ach, Gott! I hope we have a good, hot summer! The last vintage was so
poor," Bauer replied, shaking his head. "I'll be glad when the rest of the young men
come home from the army. It was hard to harvest with only women and
children."

"Not many will be coming home." Of his patriotic friends from Rodern--Franz,
Jürgen, Karsten, and Helmut--only Siegfried had lived to endure this shameful
surrender.