Switching From Windows to Mac 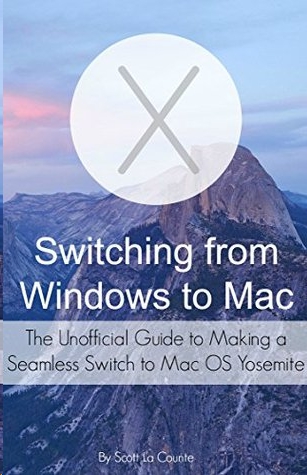 Switching
from
Windows to Mac

Mac? Is It Worth It?

Setting Up With Ethernet

Adding Music to your Library

Part 2: Making the Mac Yours

Please note, while every effort has been made to ensure accuracy, this book is not endorsed by Apple and should be consider unofficial.

Every year or so you hear the big pitch: Windows is
finally
going to be awesome again. The new update is big, grander and a huge overhaul. And then it comes and it’s more buggy, weirder, and less functional than the version that came before! That’s probably what made you consider making the switch—you’re tired of the excuses and you want a computer that just works!

Whether you are a new convert to Mac, still thinking about making the switch, or just want to learn more about Macs, this book will guide you through the Mac OS and help you see how making the switch really isn’t the great leap that you once thought it was.

This book will show you the basics and show you how to do the common day tasks you know on Windows (like right clicking). It will also show you how to get your Mac in sync with your iPad or iPhone, and how to do everyday tasks like change background, find files, and performance tweaks to keep your Mac running like new.

Mac? Is It Worth It?

Before diving into the actual software, let’s address the obvious: why pick Mac?

I was in the Windows camp for a long time; I’d see the Mac and think it was just a computer for hipsters. Sure they were nice to look at—they were shiny and didn’t look plastic-y and cheap…but they were also expensive.

But then I actually used one, and I was blown away. Here’s why…

You’ve probably heard someone say they use a Mac because they don’t get viruses. That’s not true.  Any computer can get a virus. But it is true that Macs are generally less prone to viruses and are more secure.

The reason you don’t hear about Mac viruses very often is twofold:

I know a lot of Mac users, and rarely do I hear someone say they have a virus. If you are concerned, however, one popular free virus protector is called Bitdefender Virus Scanner (
http://www.bitdefender.com/
).

When it comes to design, Apple likes to make things that are beautiful and simple. This philosophy can be seen in their watches, iPhones, and iPads—across all their products.

Because Apple spends so much time keeping it simple, you also have seen the last days of computer crashes and blue screens of deaths.

Apple spends a lot of time thinking not just about what the computer should do, but how people will do it. If you’ve been using Windows all of your life, then all the different menus and buttons might seem intimidating at first—but don’t stress! This book will show you how much easier it actually is.

If you have any other Apple product, then many of the common Mac tasks will probably seem very similar to you. What’s more, if you have an iPhone, iPad, or even Apple TV, then they all work and interact with each other.

One reason Windows computers are cheaper is because manufacturers team up with software companies and install all kinds of unnecessary programs—most of them are just free trials.

With Mac, you turn your computer on for the first time, create an ID if you don’t already have one, put in your Wi-Fi, and login to iTunes / iCloud. That’s it. It should take less than ten minutes to get your computer up and running once you get it out of the box.

First things first: installation. If you have a new computer, then this won’t apply to you; your computer is already setup with the most recent OS (operating system). Because Apple constantly updates their software, however, you will want to see if there’s an update available.

To do that, just go to your Launchpad (It’s the rocket in the taskbar at the bottom of your screen), and click it once.

This brings up all your currently installed apps. You can either type “App” to search for the App Store, or you can just look for the icon. If there’s an update available, you’ll see a number on it, which represents how many updates are available.

Next, click “Updates” from the top menu bar, and then click “Update” next to the software that needs updating. If you don’t see an Update button, then you are all set—no update is needed. If you do update, depending on the size of the update and speed of your Internet, it will usually take ten to forty minutes to update—and it will need to restart your computer to fully install. While it’s updating, you can continue using your computer—it will tell you before it restarts so you can save your work. The OS will do everything for you—the only thing you need to do during the update is wait for it to complete.

Apple will generally release a new OS each year (traditionally around the same time that new iPhones are announced).

If you are using an older computer and need to install the latest OS (Yosemite), it’s pretty simple. Just go to the app store just mentioned, and search for Yosemite, then download it. Here’s the good news about the update: it’s free! Apple has done away with charging for software updates.

The file is just over 5 GB in size so make sure your computer has room—if it doesn’t you can skip ahead a few sections and see how to clean up your Mac.  Once it’s finished downloading, follow the on-screen prompts. Your Mac will restart several times, so don’t worry about it acting weird—this is normal.

You’ll know when it’s finished because everything will look a lot different, you’ll have cool new wallpaper, and a Welcome dialogue box will appear.

If you are one of the few Mac users who haven’t yet upgraded to OS X Mavericks and are still using OS X Snow Leopard, Lion, or Mountain Lion, you will have to finally bite the bullet and click the download link for Yosemite.

Here’s the bad news for you: if your computer has an OS that is less than Mavericks, there’s a very good chance it doesn’t support Yosemite.

The general requirements are below:

Anton and Cecil, Book 2 by Lisa Martin
Julia's Future by Linda Westphal
The Book of Aron by Jim Shepard
Encyclopedia Brown Cracks the Case by Donald Sobol
The Boneshaker by Kate Milford
Then Came You by Vanessa Devereaux
This Is the Story of a Happy Marriage by Ann Patchett
Dead Souls by Ian Rankin
Heather Graham by Bride of the Wind
Real Vampires Don't Sparkle by Amy Fecteau