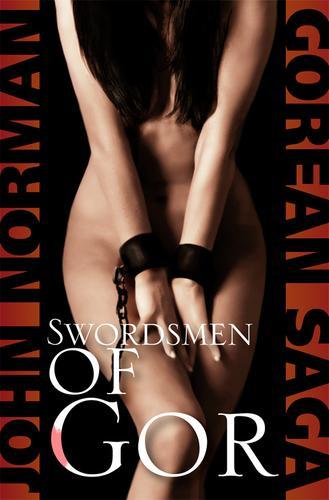 Volume twenty-nine in the Chronicles of Counter-Earth

Fresh from his exploits in the Steel Worlds, home of the Kurii, a savage alien race intent on conquering Gor, Tarl Cabot has been returned to an isolated beach, at coordinates apparently specified by the Priest-Kings, the masters of Gor and the enemy of the Kurii. His only companions are his beautiful new slave Cecily, and Ramar, a ferocious sleen bred in the Steel Worlds to hunt and kill. But why has he been returned to such a remote spot? Did the Priest-Kings wish their former agent to serve them once more? Did the Kurii intend to use Cabot to further their own ends? The truth, as Tarl will learn, is darker, and deeper, than either of these possibilities.

In SWORDSMEN OF GOR, the latest book in John Norman’s best-selling Gorean saga, follow Tarl as he embarks on a new adventure with the Pani, a strange people with mysterious origins, and learn the dark, sinister truth behind his return to Gor, the Counter-Earth.

Book 29 of the Gorean Saga

Note: Mr. Lange, please insist to these companies whom are publishing your works, that they perform proper formatting on your e-novels. I may not do the best job, but they are certainly muchly better than what the current sleen are doing.-
DM

WHAT OCCURRED AT THE EDGE OF THE FOREST

“I had not dreamed it so,” she said. “How could it be so beautiful?”

She stood on the beach, Thassa, calm, the sea, before her, the forest behind her.

We watched the ship of Peisistratus ascending, almost vertically, and then vanishing, far off, a sparkle, in the bright, blue sky.

“You had seen only Earth,” I said, recalling that distant, desecrated, half-ruined world from my past, “and the Steel World, once ruled by Agamemnon.” The name ‘Agamemnon’ was not the actual name of he who was once a Steel-World master, but it was chosen, it seems, for obscure associations. In any event, the actual name, being in Kur, could not be well rendered into phonemes accessible to the human throat.

In any event, we need not concern ourselves with Agamemnon as he had been dethroned, removed from the Steel World in question, and brought to Gor by exiled, devoted liegemen. Too, without a body, he was little to be feared.

The Steel Worlds are not visible to the naked eye, nor even to relatively sophisticated telescopic instrumentation. Too, they lurk, like wolves, muchly concealed, amongst the scattered stones, some small, many mighty, of what, on Earth, is commonly referred to as the asteroid belt, on Gor, by those familiar with the Second Knowledge, as the reefs of space.

Ramar, the sleen, lame, rubbed against my thigh.

To be sure, I knew we were somewhere in the vicinity of the northern forests, north of the Tamber gulf, east of Thassa, well south of Torvaldsland. This mode of orientation is not Gorean, the common compass of which, with its eight cardinal points, is oriented to the Sardar, the dark, walled, mountainous abode of Priest-Kings, but founded on the Gorean poles. I am utilizing this manner of speaking, as it seems to me not only convenient but suitable. Should this record, then, which is written in English, and will thus be unintelligible to most Goreans, this often a boon to the writer, assuring as it does a modicum of privacy, indeed, it commonly amongst Goreans counting as a suspect, secret writing, come into the hands of any who might be familiar with English, these directions will be reasonably well understood. I write in English because it is easiest for me. Although I speak Gorean fluently, I can read it and write it only with difficulty. This is not unusual with those of my caste, many of whom, by choice, are contemptuously, pridefully illiterate, holding themselves superior to what they despise as trivial, vulgar learning. The business of their caste, then, in their view, is not with the pen but with steel, not with ink, but blood. Let scribes, they say, be adept with letters, and such, for that is their business, little scratches and marks on scrolls, and such. But this is not for them, not for the Scarlet Caste. But, too, should not each caste concern itself with its own business, the metal worker with metals, the peasant with the soil, the mariner with the sea, and so on? I do not commend this view, but report it. Too, in all honesty, it is not that unusual to find refined, literate members of my caste. Some members of my caste are educated gentlemen, educated, distinguished, dangerous gentlemen. Gorean, incidentally, is written “as the bosk plows,” which requires an alternating laterality, the first line read from left to right, the second from right to left, and so on. I might also mention that certain measures, of, say, length and weight, and such, will be approximated in English, in terms of pounds, yards, inches, and such, rather than in terms of stones, paces, horts, and such. The Gorean pace is very close to the English yard, but the stone is well over a pound and the hort is somewhat longer than an inch. I think this way of doing things will be helpful to an English reader. An exception, though perhaps not the only one, is the “pasang,” a convenient, often-encountered linear measure, easily graspable, I think. It is, as nearly as I can determine, having paced it out long ago, between pasang stones in the vicinity of Ko-ro-ba, some seven tenths of an English mile.

“The air has not been fouled,” I said. “Goreans love their world.”

“It is all so beautiful,” she breathed, wonderingly.

“Earth,” I said, “was doubtless once much like this.”

“The gravity,” she said, “is much like that of the Steel World.”

“It should be identical,” I said. “The rotation of the Steel Worlds, which produces their surrogate gravity, is arranged to simulate that of Gor.”

“There is a purpose in that?” she said, uneasily.

“Certainly,” I said. “The Kurii want Gor. Would you not want Gor, as well?”

“Given the fall of Agamemnon,” she said, “Gor has nothing to fear.”

“That is false,” I said. “Agamemnon wished to act unilaterally, and have Gor for himself. Many others, and even many in his own world, found that ambition unacceptable, or, at least, unrealistic. The denizens of the Steel Worlds, on the whole, wish to obtain Gor cooperatively, and, after that, they can dispute it amongst themselves.”

“That explains much of the history of Earth,” I said, “competition for territory, resources, and such.”

“As loot, as properties, and slaves,” she said.

“Of course,” I said. “They are always valuable, as counters of wealth, and such.”

“And, one supposes, as helpless, vulnerable vessels of pleasure,” she said.

“Yes,” I said, “as helpless, vulnerable vessels of pleasure, vessels of inordinate pleasure.”

“As animals, whom you use as you wish?” she said.

“Men are beasts,” she said.

Her hand went, inadvertently, not really thinking much about it, to her throat. She could not remove the light, flat, slender metal band which encircled it, attractively, closely.

“Sometimes the Priest-Kings,” I said, “as a most cruel punishment, condemn an individual to Earth.”

“Those of Earth are unaware of the nature of their world,” she said.

“They do not much mind it,” I said, “for they have known nothing else, nothing better. But the poor man, or woman, who is sent to Earth from Gor, they well understand the harshness of their sentence.”

“I suppose they, their lesson learned, must hope in time for mercy, a pardon, a reprieve?” she said.

“Some are sentenced for life,” I said.

“I am much pleased to be here,” she said.

She was well legged, sweetly hipped, narrow waisted, and well breasted. I did not think she would need be disappointed at the price that would be likely to take her off the block.

She was the sort of woman who was eminently purchasable.

The block was designed with such as she in mind.

“Oh, yes,” she said. “Yes! Yes! Extremely so! And particularly and appropriately so!”

“Yes, and perfectly so!” she said.

“On Earth you did not anticipate it,” I said.

“Certainly not,” she said, “though I now realize how pathetically, and needfully, half consciously, sometimes fully consciously, I longed for it.”