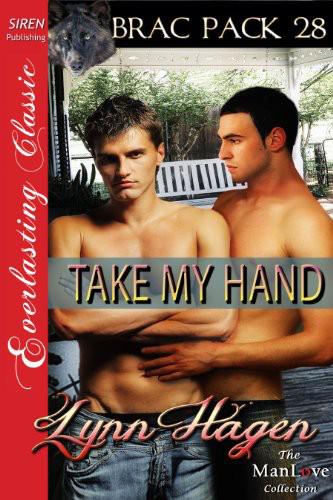 Darcy is a worrier, a pessimist, and overanalyzes everything until the subject dies a slow and painful death…and then he worries some more. When he and his brother, Sterling, find their way to Brac Village, Darcy thinks the place is just too perfect. Something is off, and Darcy is determined to find out what that something is.

Raven, the oldest of four brothers, has found his mate. Being raised by a prejudiced, homophobic jerk doesn’t deter Raven from wanting Darcy in the worst sort of way. From the moment he sets eyes on Darcy, Raven can think of nothing more than drinking from his mate’s vein.

He just wasn’t certain if that was normal.

When a motley crew of shifters shows up in Brac Village, seeking protection, trouble isn’t too far behind them. And when Darcy’s younger brother is attacked, Darcy grabs Sterling and heads out of town as quickly as his feet will carry him.

But can he leave knowing his heart is chained to Raven? Can he walk away from the best thing to ever happen to him? When Darcy discovers Tate’s Resource Center, he also finds out what he is truly running from.

Siren Publishing, Inc.
ABOUT THE E-BOOK YOU HAVE PURCHASED:
Your non-refundable purchase of this e-book allows you to only ONE LEGAL copy for your own personal reading on your own personal computer or device.
You do not have resell or distribution rights without the prior written permission of both the publisher and the copyright owner of this book.
This book cannot be copied in any format, sold, or otherwise transferred from your computer to another through upload to a file sharing peer to peer program, for free or for a fee, or as a prize in any contest. Such action is illegal and in violation of the U.S. Copyright Law. Distribution of this e-book, in whole or in part, online, offline, in print or in any way or any other method currently known or yet to be invented, is forbidden. If you do not want this book anymore, you must delete it from your computer. WARNING: The unauthorized reproduction or distribution of this copyrighted work is illegal. Criminal infringement, including infringement without gain, is investigated by the FBI and is punishable by up to 5 years in federal prison and a fine of $250,000. If you find a Siren-BookStrand e-book being sold or shared illegally, please let us know at
[email protected]
copyright monetary
A SIREN PUBLISHING BOOK
IMPRINT: Everlasting Classic ManLove

If you have purchased this copy of
Take My Hand
by Lynn Hagen from BookStrand.com or its official distributors, thank you. Also, thank you for not sharing your copy of this book.

This is Lynn Hagen’s livelihood. It’s fair and simple. Please respect Ms. Hagen’s right to earn a living from her work.

Darcy glanced sideways at his brother as they walked down the long stretch of country road. It was late afternoon, the sun high and hot, making Darcy wish for an ice-cold glass of water. He was tired as hell, too. He knew Sterling was just as tired. But his younger brother didn’t complain as Darcy tried to figure out just exactly where they were going and what they were going to do once they got there. The problem was he didn’t know where they were at.

Portrait in Crime by Carolyn Keene
The Shadowed Manse by David Alastair Hayden, Pepper Thorn
The True Story of Stellina by Matteo Pericoli
The Eagle Has Landed by Jack Higgins
The Rise and Fall of Alexandria by Justin Pollard
Madly by M. Leighton
Sandokán by Emilio Salgari
Ghost Ship: A Port Chatham Mystery by P. J. Alderman
The Handmaid's Tale by Margaret Atwood
South by Ernest Shackleton