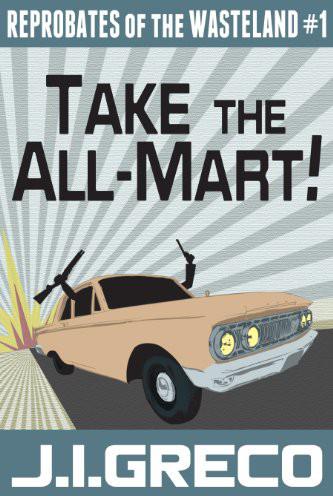 CHAPTER 1: A SUNDAY DRIVE, WITH CANNIBALS

CHAPTER 2: WELCOME TO THE WASTELAND

CHAPTER 6: BREAKFAST WITH THE NEW GOD

CHAPTER 8: ON THE ROAD AGAIN?

CHAPTER 9: A WALK IN THE DARK 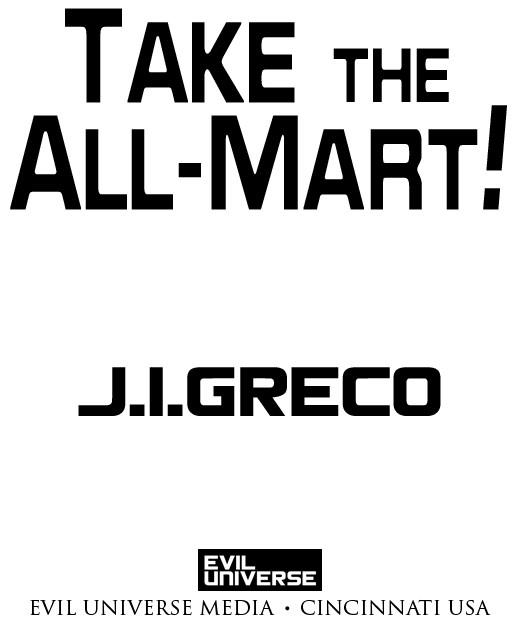 Take the All-Mart!
is a work of fiction. Names, characters, places, and incidents are products of the author’s imagination or are used fictitiously and are not to be construed as real. Any resemblance to actual events, locales, organizations, or persons, living or dead, is entirely coincidental.

CHAPTER 1: A SUNDAY DRIVE, WITH CANNIBALS

The tricked-out, inch-thick depleted uranium armor-scaled ‘73 Dodge
Swinger
called the
Festering Wound
hauled ass through the Wasteland down the cracked and cratered, debris-strewn remains of I-80 on adaptaplastic tires, her breeder reactor thrumming dangerously close to red-line.

Trip was behind her wheel, plugged into the dash and driving with his mind through the coiled patch cord jacked into the socket behind his right ear. The steering wheel jerked freely on its own, Trip’s eyebrows twitching to swerve the
Wound
around long-abandoned cars and potentially Dodge-swallowing pot-holes.

“You know,” Trip said, taking a final drag off one hand-rolled cig, jabbing it out in the overflowing dashboard ashtray, and immediately lighting a new one with the car lighter, “I’m seriously thinking about giving up this whole reprobate adventurer thing and going into accounting.”

Trip was 23, tall and wiry, pale and twitchy, with jet-black hair sculpted into a Jack Lord curl. He wore a grime-caked long-tailed tux jacket with the collar popped and the sleeves rolled up to the elbow, a t-shirt that simply read “Game Over”, ripped and faded black jeans, and red canvas hi-tops kept together with duct tape.

“Have you ever given any thought to lion taming?” Rudy asked, along with the sound of a zipper being yanked down, all wet and mushy.

“No good — I’m allergic to chairs.” Trip glanced over at Rudy in the passenger seat, and instantly regretted it. He winced, quickly looked away. “Vishnu’s nipples, man, can’t you keep your hands out of there for five fuckin’ minutes?”

“Not if I want to keep my buzz going, I can’t, no. I’m burning through mix like nobody’s business today. I blame stress. By which, of course, I mean you.” Rudy was 22, compactly stocky but muscular, with ruddy skin and a flame-red soul patch. He was already balding. What hair he had left jutted out in curly tufts from under a crumpled leopard-print fez. He wore a Peace-symbol t-shirt under an ammo bandolier, forest camo parachute pants, and steel-toed hikers.

Rudy plunged a hand through the zippered opening in his own stomach, pushing aside intestines to rummage around in his guts with practiced abandon. “‘Let’s go East’, you said.” Rudy’s fingers found what he was looking for hiding behind his spleen. “They love us in the Wasteland.’“ A twist and a hiss and he pulled out a thumb-sized cylinder, empty and dripping with viscera. “Ass.”

Rudy tossed the empty over his shoulder into the back seat, then slid a fresh, full cartridge out of his bandolier. Biting his lip, he shoved the cart into his gut, squirmed around to fit it into place. A twist the other way and with a sharp hum the chemical synthesis plant in his belly came back online, refueled, almost instantly re-flooding his bloodstream with fresh THC-analog. Rudy went all content and withdrew his hand, zipping his stomach back up and patting his hairy belly. “Ahh, sweet pseudo-cannabis bliss. I’m ready for death, now.”

“I don’t see how that’s possible.” Rudy wiped the viscera from his hand on his camos and pulled his t-shirt down. “Unless they’ve all of a sudden given up and gone away?”

Trip glanced into the driver’s side-view mirror. The Magnums were still on their ass, the whole mind-linked, cannibalistic howling mad WOLFpack of them, weaving after the
Wound
half-a-meter off the road on plutonium battery-powered sonic surfboards. Two dozen of them, maybe more. Obsessed with the old TV private eye, they all looked like prime 1980’s Tom Selleck, even the women, thanks to sloppy amateur elective plastic surgery, cheesy hair-plug mustaches, and tattered Hawaiian shirts. Each one had a whip antenna grafted onto a temple, the tips of the antennas blinking angry red in staccato unison. They brandished a variety of weapons: nail-encrusted baseball bats, crowbars with spikes welded to their tips, sawed-off shotguns, and one severed leg with the foot wrapped in razor wire.

“No, apparently not.” Trip took a long draw from his cig. “We’re out of grenades, aren’t we?”

“Yeah, you used them all back at that sports bar in Albuquerque winning that Karel Capek bobblehead alarm clock from those robo-bikers.”

“It was near-mint-in-box. It’s a collector’s item.”

“Which you promptly threw in the trunk and haven’t looked at since.” Rudy scratched his soul-patch, thinking, then snapped his fingers. “What about the autocannon? Just flip us around, charge the bastards and open fire.”

“You traded the last box of shells for two dozen donuts outside of Indy.”

Rudy went sheepish. “Did I?”

“Yeah. In the future, let’s just assume we’ll need ammo more than food and not trade it away.”

“But they had sprinkles.”

“Even for sprinkles.” Trip twitched his left eyebrow to have the
Wound
avoid the burnt-out husk of a semi cab, then smirked over at Rudy. “You wouldn’t want to throw yourself out the window, would you? If you tuck and roll, maybe you’ll knock a couple over. Probably won’t stop them, but it’ll give me a much needed chuckle.”

“May I suggest a rail gun?” came a clearly fake English-accented voice from the back seat.

Trip huffed. “Yeah, that’d be nice. Too bad we don’t have a rail gun.”

Trip and Rudy looked at each other in surprise, then back at the Higgins, bound in electrical tape and smiling smugly at them from the back seat. The WOLFpack’s hub, he was done up like a proper, prissy English gentlemen about to set off on a jungle adventure, complete with a fraying safari outfit and pith helmet. A pair of extra-long whip antennas grafted onto his temples stuck up through holes crudely cut in the helmet’s brim.

“You ain’t got no railgun,” Trip said, then raised an eyebrow at Rudy. “Do they?”

Rudy shrugged. “I didn’t see any...” His side-view was long-gone missing in action, so to check he had to poke his head out the window, clamping a hand over his fez to keep it from flying off.

In the rear of the pack, a female Magnum was unslinging a long, thin-barreled rifle from her back. She tossed it to a short Filipino Magnum bobbing in front of her. He in turn tossed it to the Magnum in front of him, and so on. The rifle worked its way up through the weaving pack, tossed from Magnum to howling Magnum, finally arcing through the air at the back of the burly, toothless Magnum at the head of the pack. At the last possible moment, the leader spun, clutching the rifle out of the air, and continued spinning, leveling and aiming the rifle at the
Wound
as he completed the three-sixty.

Rudy pulled his head back in, his face serenely grave. “Looks like a Norwegian special action stock with a knock-off Israeli straight-bore accelerator.” He twisted around to ask the Higgins: “What are they using? Tungsten slugs?”

The Higgins smiled at him. “What else?”

Cig dangling from his lips, Trip looked at Rudy. “Think they’ll be able to get through the armor —”

He cut himself off as, out of the corner of his eye, he saw the Higgins suddenly jog his head to the side. Trip had just enough time to duck himself before the —

Where the Higgins’ head had been a second before he moved, a half-inch hole had just simply appeared in the armor scaling over the rear window, the edges of the hole glowing white hot. A matching exit hole had appeared almost instantaneously in the windshield, right under the rear-view.

“Vishnu’s aunt Patty.” Trip stared at the hole in the windshield as he sat up. “That missed me by way too little.”

Staring back at the entry hole and past the grinning Higgins, Rudy reached under his t-shirt to give his left nipple a good twist, turning the flow of THC-analog from his belly factory all the way up. “Too late to go to Rehoboth, isn’t it?”

Trip gave him a curt smirk, then twisted to sneer back at the Higgins. “Go ahead, be all smug. They could have hit you, you know.”

“They know exactly where I am,” the Higgins said. “That’s how this works. My pack sees, hears, feels and shares every thought I have.”

Rudy balled a fist and punched the Higgins in the eye. “How’d they like sharing that?”

The Higgins shrugged it off, chuckling even as his eye socket began to redden and his eyelid puffed up.

“What’s so funny?” Rudy asked, kissing his knuckles and shaking his fingers out.

“I’m telling them to put the next one between your shoulder blades.”

Trip took a long suck of his cig, titled his head back to blow smoke at the duct-taped patched ceiling. “Rudy, I’m going to need a moment to think. Alone.”

Rudy nodded enthusiastically and grabbed the stun baton off the dash. “Goodnight, you prince of mind-sharing freaks,” he said as he twisted around and jammed the baton into the Higgins’ neck, triggering it on contact.

The Higgins convulsed with a gurgled yelp, eyes rolling to white before he gave a final shudder and went limp, unconscious. Rudy kept pulsing him until the Higgins slumped over, cheek slapping against the seat cushion, and his antenna tips started erratically blinking yellow, connection with the WOLFpack lost.

Rudy settled back into his seat, tossing the baton up onto the dash. “Not that that didn’t feel satisfying on a whole number of levels, but they’ve still got that railgun.”

Trip flicked his cig out the window and reached into his tux jacket to take an ancient Bugs Bunny Pez dispenser from one of the dozen utility pockets sewn into it. He tipped the head back to pop a chalky home-made tablet into his mouth, where it dissolved almost instantly, the mix of 500 mg caffeine, 200 mg evaporated distilled iguana urine, and a spritz of bug spray for extra kick and flavor hitting him like a happily runaway freight train. Nerve endings pleasantly on fire and smirking like a madman, he tucked the plastic rabbit gently away, and closed his eyes to commune with the
Wound
. “They’re not gonna fire without his lordship-eyes-and-ears back there telling them where to aim. They won’t risk hitting him.”

“So that’s the plan?” Rudy asked. “Just keep him knocked out while we drive until we hit the Atlantic and drown?”

Sidney Chambers and the Shadow of Death by James Runcie
Much Fall of Blood-ARC by Mercedes Lackey, Eric Flint, Dave Freer
My Life as a Book by Janet Tashjian
Romeo is Homeless by Julie Frayn
Mystery of Banshee Towers by Enid Blyton
[Finding Emma 03.0] Megan's Hope by Steena Holmes
My Wicked Enemy by Carolyn Jewel
The Mammoth Book of Perfect Crimes & Impossible Mysteries by Mike, Ashley
Paying the Price (Book 5 of The Empire of Bones Saga) by Terry Mixon
In Solitary by Kilworth, Garry