Take Your Time (Fate and Circumstance #2) 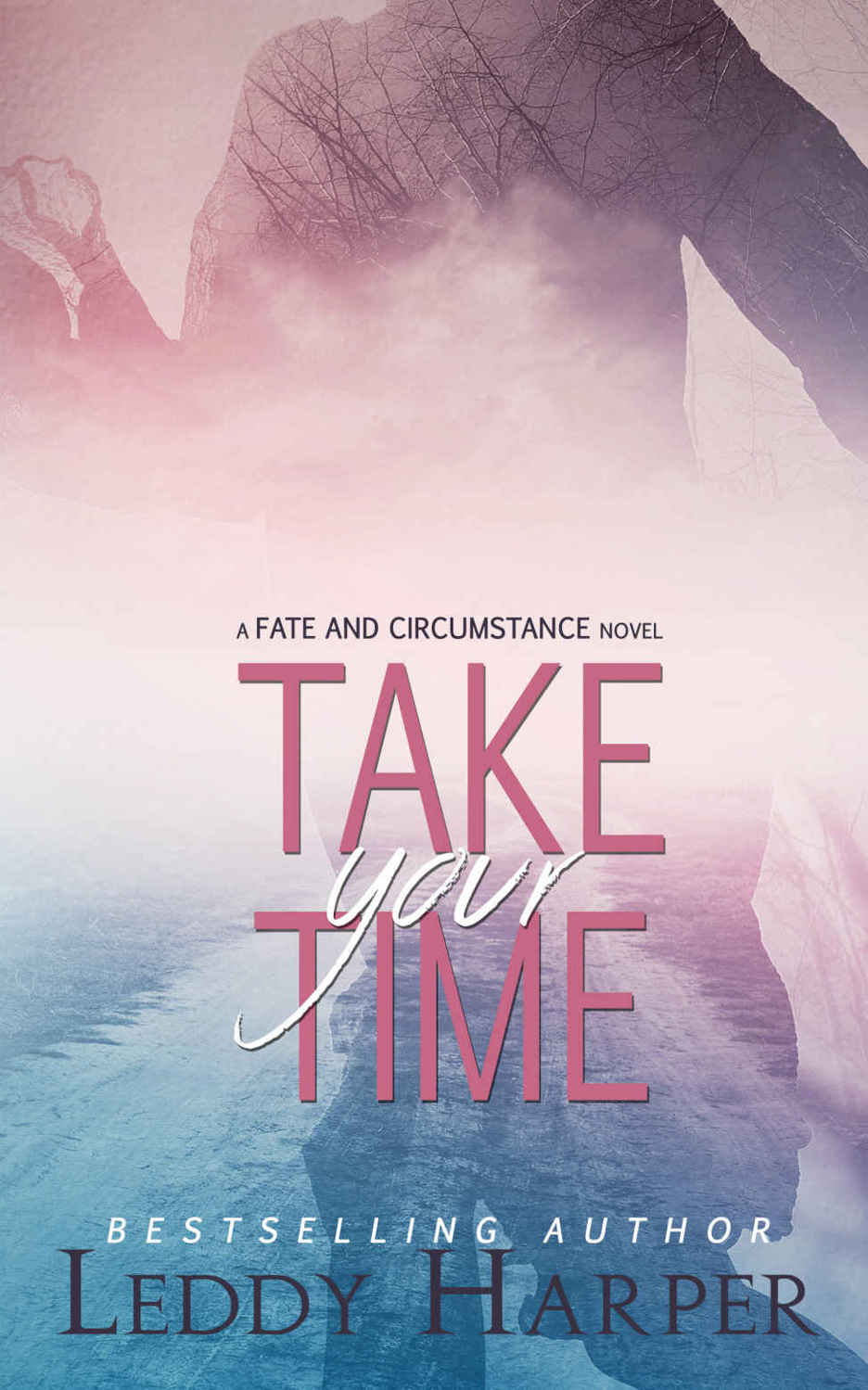 This book is a work of fiction. Names, characters, places, and incidents either are products of the author’s imagination or are used fictitiously. Any resemblance to actual persons, living or dead, events, or locals is entirely coincidental.

More Than Anything prologue

“It takes a minute to find a special person, an hour to appreciate them, and a day to love them, but it takes a lifetime to forget them.” –Anonymous

It was Christmas morning, my favorite day of the year. The house buzzed with excitement as everyone began to show up, filling the rooms with laughter and joy. The only person missing was Mom. I knew I’d find her in the kitchen, preparing for the big holiday, and I wanted nothing more than to help her like I did every year. I found her leaning against the counter with her head cradled in her hands.

“Everything all right, Mom?” I asked, walking cautiously toward her.

She straightened, holding herself up at the sink, and plastered a smile on her face. However, the dimness behind her normally bright eyes alerted me to the pain she tried to hide. I knew right away that her migraines were back. They’d plagued her for years, nearly crippling her at times. But she was on a regular Botox injection treatment plan to keep them away.

“When are you due for more shots?” I asked, grabbing a dishtowel and wetting it with cold water for her forehead.

“Not until next month.”

“That’s weird. You don’t normally get them this bad before treatment, do you?”

She took the rag from my hand, pressed it against her cheeks, and then dabbed it down her neck. “No. It came on this morning. Out of nowhere.”

“Did you take anything?”

She nodded. Clearly, the pain was too intense for her to speak.

“Go lay down, Mom. Don’t worry about lunch. I’ll take care of it for you.”

“Sarah, we have guests. I shouldn’t—”

“Mom,” I said sternly, using her motherly tone against her. “Don’t worry about them. Axel’s mom is with his sister’s little boy, the girls are entertaining each other in Ayla’s playroom, the women are chatting about weddings, and the men are discussing ways to keep their women happy. No one will mind if you go lay down for a little bit. I promise, I have everything under control.”

“I’ve trained you well, Sarah. One day, this holiday will be all yours.”

She waved me off and moved out of the kitchen. “Just that one day, this family might need someone to step in and take care of the food and decorations and make sure everything is planned to perfection. And you’re the perfect person for the job. It’s the natural progression of things.”

“Stop talking like that, Mom. Go lay down.” I watched her walk back to her room as I finished with kitchen duty, reminiscing about the holidays in the past.

No matter how old I’d gotten, Christmas still made me feel like a child again. From the moment the first decoration went on sale at the local gardening store, or the first house that put up lights, I became giddy and it filled me with excitement and joy. That one day held the power to bring back memories of my childhood, growing up, and the traditions we continued every year no matter how much our lives had changed. And boy, did they change.

My real dad had passed away when I was three. My sister, Clarissa, was only one. As much as I wished I could remember him, at least I didn’t have to live with the grief of losing a parent. It’s shallow to say, sure, but nothing could be worse than being reminded of someone you loved unconditionally and realizing you’d never get those moments back. You’d never be able to apologize for hurtful words, or say thank you for things you might’ve once taken for granted. My dad got to experience the utter, complete, and honest love from his daughters before passing on. I just always felt bad for my mother. But she had a way of making things better for us.

For as long as I could remember, we had a Christmas tradition. Instead of buying gifts for each other, we’d make them, and then stick them under the tree without names on the tags. It was our own version of Secret Santa. The gifts from Clari—my sister—and me were pretty much garbage, but my mom’s eyes would light up and she’d ooh and ahh over every present she’d open. Mom loved to paint, so we always got canvases with beautiful scenes on them. We’d hang them in our rooms along with the previous years’ portraits, and make sure we always left room for new ones.

I was thirteen when my mom remarried; Clari was almost eleven. Wayne was the first guy Mom ever brought home, and we loved him from the very first time we met him. He made her happy, which made us happy. And even better, he loved our holiday tradition and insisted we kept it. Now, looking back on it, instead of loving the Secret Santa idea, the decision probably had more to do with the fact that we didn’t have much money, but I didn’t care. It didn’t matter what the reasons were, I only cared about picking which wrapped gift I wanted. After a few years, Wayne had been offered a better-paying job, and Mom got the promotion she’d been after for a long time. Money was no longer an issue in our family, but it never changed the tradition of Christmas morning.

The summer after I graduated high school, our family changed again. Wayne’s daughter, Aubrey, came to live with us. I’d never met her before, though I’d always known about her. The only times I’d ever heard Mom and Wayne fight were after his phone calls to her. I never understood what they were about until she came to live with us. We hit it off from the very beginning, and were so close that we decided to become roommates after she graduated from high school the following summer. But still, even when Aubrey joined our household, our Christmas tradition remained.

I always loved Aubrey’s gifts. She had an amazing talent when it came to woodwork. And after my mom taught her how to paint, her gifts became even more amazing. Clari and I always fought over who’d get Bree’s gifts, and eventually, she just started making two of each. By the second Christmas with Aubrey, our lives changed once more. She had a little girl, McKayla, who brightened our days with her white hair and ocean-colored eyes. Her laugh was infectious, and she had everyone wrapped around her little finger. She was the only person in the family that received store-bought presents at Christmastime. Lots and lots of store-bought presents.

A few months ago, McKayla’s father came back into the picture. I’d known about him from the very beginning, but it was something Aubrey had sworn me to keep secret—she’d kept it hidden from everyone except me. There was a lot of controversy surrounding her relationship with him. Yet they ended up working everything out and became the kind of family anyone would be envious of. Hell, just witnessing the way he looked at her made anyone in the room jealous. I was happy for them both, and happy that Ayla finally had her daddy in her life. With Christmas coming up, and plans being made for his entire family to join ours for the holiday, we had a family meeting to discuss presents and preparations. I worried that our tradition would be over, though surprisingly, it was a unanimous decision to keep it alive. Even Axel was on board.

So bright and early that morning, I headed over to my parents’ house, getting ready to help my mom with Christmas preparations like I did every year. Nerves hit me about meeting new people, although I stuffed them down with a smile on my face.

The first Christmas miracle came when Aubrey and Axel arrived. He’d proposed to her the night before and she said yes. I really thought Wayne, or Dad as I oftentimes called him, would’ve been upset over the news—like he had when he learned that Axel had fathered McKayla. But he wasn’t at all angry. In fact, he didn’t even seem surprised by it. I later learned that Axel had done the right thing by seeking Wayne’s permission beforehand. I would be asking Santa for an Axel clone to be delivered next Christmas.

Once his family arrived, the house became rather chaotic. Aubrey and Clari talked wedding plans since Clari had just gotten married a few months ago. McKayla played with Axel’s niece. And you couldn’t get a word in edgewise around Wayne and Axel’s father. I knew I wouldn’t miss much by taking over in the kitchen for my mom.

After I finished getting everything ready for lunch, I called the family together for prayer. We decided to eat first, and then open presents while letting the food settle. Figuring my mom would probably want to eat with the rest of us, I headed back to her room to wake her, hoping she felt somewhat better.

The bedroom was completely dark since Wayne had installed blackout curtains years ago due to my mom’s intense migraines. I found her bundled up in the middle of the bed with the blankets wrapped tightly around her. So I climbed in beside her, snuggling up to her for a moment of peace.

I moved in closer, expecting her to wake up from my movements, but she didn’t. I called out to her, quietly at first, and then louder. She didn't answer. I shook her, but she didn’t budge. I gulped down my breaths, my body shaking from the inside out as fear embedded itself in me. My gaze frantically searched the dark room, even though I had no idea what I tried to find. Finally, tears flooded my eyes, cascading down my cheeks as my shrill voice called out for help. I didn’t care who heard me. I just needed someone to come. I needed someone to save my mom.

That day, my life changed again.

Only this time, it wasn’t for the better.

And Christmas was no longer my favorite day of the year.

Hit and Run by Norah McClintock
The Greenhouse by Olafsdottir, Audur Ava
The Vigil by Marian P. Merritt
Kissing Shakespeare by Pamela Mingle
Lady Ellingham and the Theft of the Stansfield Necklace: A Regency Romance by Rochester, Miriam
Marked as His by Em Petrova
Flat Stanley's Worldwide Adventures #11 by Jeff Brown
A Hummingbird Dance by Garry Ryan
The Bone Flute by Patricia Bow
Bloody Dawn by Thomas Goodrich