Read Taken: Against My Will Online

Taken: Against My Will 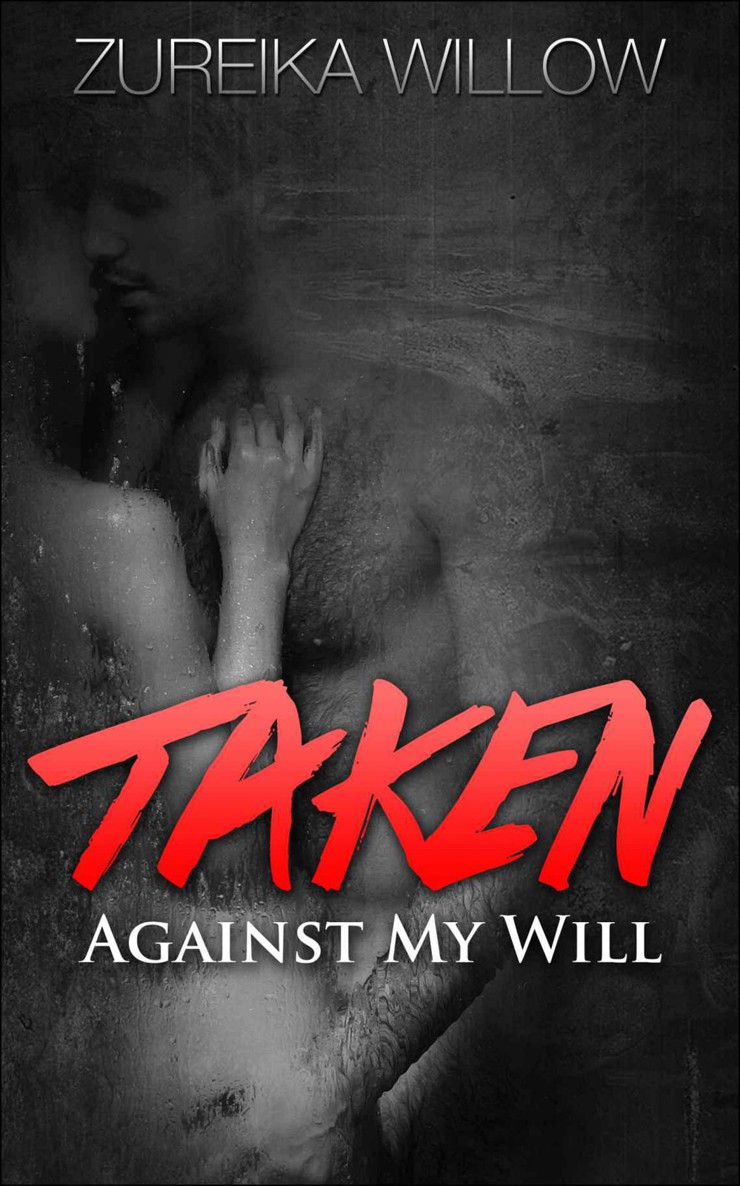 Taken: Against My Will

Taken: Against My Will
Zureika Willow
Copyright © 2014 Zureika Willow
This is a work of fiction. Names, characters, places and incidents are either the product of the author’s imagination or are used fictitiously, and any resemblance to actual persons, living or dead, business establishments, events or locales is entirely coincidental.
All rights reserved. No part of this book may be copied, shared, or reproduced in any form whatsoever, without written permission from the author.
The following story contains mature themes and is intended for adult readers.

Prologue
The crash of a vase sounded as glass shattered against the dingy grey wall of the apartment. A young boy crouched under the dining table, cowering with fright. He held his head in his hands, rocking back and forth. His sobs caught in her throat as he tried desperately to stay quiet.
“Stop crying you whiney little sod!” his step mother screeched as she raised the wine bottle to her mouth taking a long swig before wiping droplets from her chin with the back of her hand. She was a grotesque woman with lank, greasy black hair and skin so pale it looked as though she had never seen the sun.
It was dark outside and Tristen’s father had yet to return from work. His tiny mind thought of nothing but watching his father appear through the front door, ending the torture that was constant when he was not around. It was the same thing that he longed for every single day. Every day it seemed to be longer that he waited. His world revolved around two things; the torture his step mother inflicted and the lifestyle of his father.
“Get out from under the table!” she screeched as she crouched down and grabbed for him. He receded deeper under the table, trembling away from her bony fingers that were stained yellow from all the cigarettes she smoked. His head hurt where she had already slapped him around and he constantly waited for the next blow. The tell-tale bruises and scrapes of previous beatings ran up and down his body hidden beneath his clothes. His step mother was clever. She was clever enough to hit him only where others wouldn’t see and clever enough to make up stories of how he had come to be bruised and bumped whenever someone did notice something. Even his father was distracted by her sweet smile and fluttering eyelashes. The fact that his father seemed to love the hideous beast that was his wife only made the wounds even more painful.
The acid stench of alcohol made Tristen feel nauseous. It came off his step mother in rapid waves. His nervous stomach was unable to handle the stench and he found himself swallowing bile. He knew from previous experience that if he threw up she would only beat him more.
He longed to hear the sound of someone knocking at the door or even a phone call; anything that would get her attention off him. From his past beatings he remembered that they were the only things that postponed his agony.
His hiding was over then. She’d caught him with her talons of crimson red. The wine bottle smashed on the ground sending splintering glass and red wine all over him as she grabbed him with both hands. Blood beaded where the glass pierced his infant soft skin. Her fingers were a bruising pressure on his upper arms as she ragged him from under the table, bumping his head against the wooden leg. He screeched and fought to pull away but his tiny frame was nothing compared to her strength and it wasn’t long before she had him fully in her grip. He squealed in vain as she threw him against the wall. His elbow stung as it collided with the wall and he clutched it in pain.
“Get me another bottle!” she ordered adding as she pointed at the broken bottle on the floor, “This is all your fault.”
Whimpering and clutching his arms he headed toward the wine rack. It was his most visited place in the whole apartment. Even being so young he knew if he’d opened the fridge there would be nothing inside. His step mother cared for nothing but booze, sex and abuse. She’d married his father for his security and the good money he earned. In turn it had caused the loss of Tristen’s security and now every day he feared for his life. He no longer remembered the loving touch of his mother who had left two years before when he’d only been five. Instead the only interaction he ever got was a back handed slap across his back or a kick across the buttocks when he wasn’t moving fast enough for his step mother’s taste. He was like her very own slave; collecting wine bottles from the wine rack or fetching her lighter for her next smoke.
As soon as he gripped the neck of a bottle in his hand his step mother ordered, “Open it!” Tristen tried desperately to twist the screw top off but it was no use. With every bottle he tried, he seemed to grow less likely to be able to open it. His little hands were just too weak. He could feel his step mother growing closer. That’s when he felt her hand slam into his back. He reeled forward into the wine rack. Blood bubbled from a cut on his forehead as he cried out in pain, falling to the floor. His step mother towered over him with an animalistic grimace on her face. In that moment he longed for it to be over. There was only so much his fragile body could take. He longed for her to beat him into unconsciousness so that he no longer had to feel the pain. It never came to that. He was never lucky enough for that.

The Martian by Weir, Andy
Fist of the Furor by R. K. Ryals, Melissa Ringsted, Frankie Rose
Rough Ride by Rebecca Avery
Circle of Flight by John Marsden
Baby Bitch (Bitches and Queens) by Rachael James
A Mistletoe Proposal by Lucy Gordon
Pleasure Seekers by Rochelle Alers
The Making of Us by Lisa Jewell
Honor by Lindsay Chase
First Jihad: Khartoum, and the Dawn of Militant Islam by Daniel Allen Butler