Read Taken by Storm: A Raised by Wolves Novel Online

Taken by Storm: A Raised by Wolves Novel 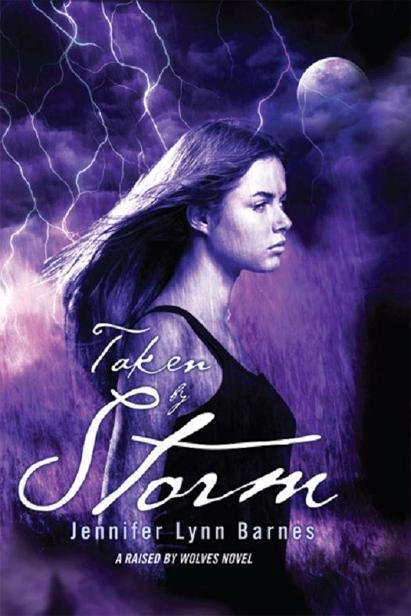 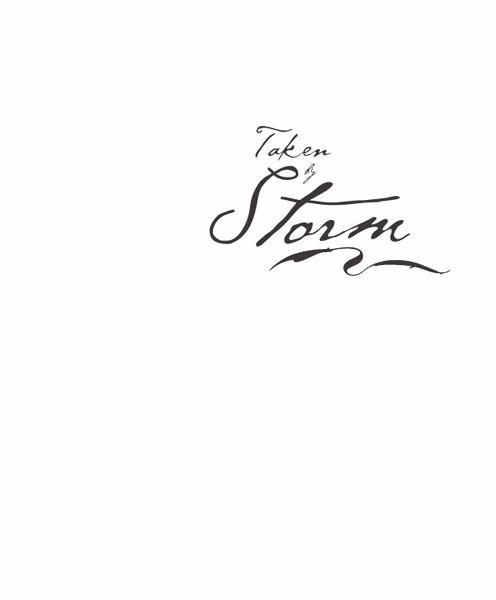 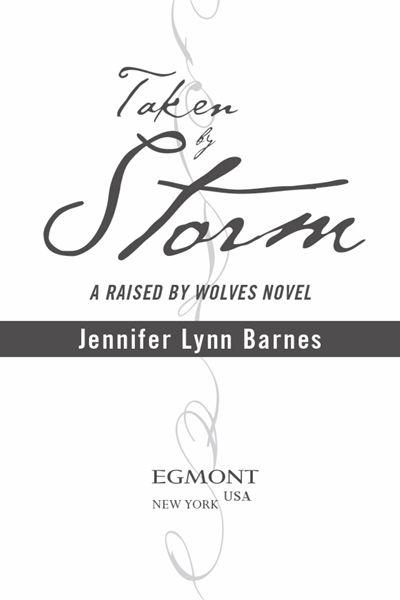 Summary: Alpha Bryn’s humanity becomes a bigger problem as she takes her place in the werewolf Senate and tries to address a new threat to the pack.

All rights reserved. No part of this publication may be reproduced, stored in a retrieval system, or transmitted, in any form or by any means, electronic, mechanical, photocopying, or otherwise, without the prior permission of the publisher and copyright owner.

I
RAN AS THOUGH MY LIFE DEPENDED ON IT.
Branches tore at my ankles and legs. My bare feet—caked with blood and mud and who knew what else—slammed into the forest floor, again and again and again. It hurt. Everything hurt.

I pushed harder, faster, my lungs on fire and my chest tightening like a vise around my heart.

I couldn’t run like this indefinitely. I couldn’t keep going, but I couldn’t stop. Muscles screaming, heart pounding—any second, my body would give in. Any second, it would be over.

I fought. I fought to breathe, fought to hold on, to keep going, to—

There it was: a whisper from somewhere deep inside of me, a familiar feeling creeping up my spine. I tasted copper on the tip of my tongue, and my vision—already blurred—shifted.

Red, red. Everywhere, there was red.

And just like that, I couldn’t feel the pain, not in any way that mattered. I ran faster, the burst of energy coming out of nowhere, the need to escape overwhelming, all consuming….

As suddenly as I’d shifted into the altered state, I fell out of it.

I’d been so close. For a moment, I’d almost had it. I’d felt it. I’d
controlled
it, but now I was just me again: sweating and exhausted and human, as incapable of summoning up my Resilience as I would have been at fighting back the tide.

Spent, I collapsed on the ground, my back against the trunk of an old tree, my lungs and legs and common sense rebelling against the ordeal I’d just put myself through: the physical pain, the strain on my endurance, the panic I’d worked myself into on purpose.

At least I’d managed to get there this time. At least it had worked. If I could flip into fight or flight mode at will on Cedar Ridge land, in the safety of a forest that felt like home, there was hope that I’d be able to do it elsewhere, that I might be able to control this power I only halfway understood.

A large part of me still balked at the idea that some people were born with unnatural aptitudes: psychic knacks that pushed the bounds of possibility. Until I’d run into a coven of psychics bent on my destruction, I’d never identified that way myself. I was just a girl with a habit of surviving things that would have killed a normal person—things like being attacked by a werewolf or set on fire by a coven of psychics.

Just, you know, for instance.

Avoiding a trip down memory lane, I waited for my breathing to even out and ignored the burning ache in my chest. It took a full five minutes for my heart rate to go back to normal, and even then I knew that I’d be feeling the effects of this little experiment tomorrow. This was the third time I’d attempted to jump-start my knack—which typically flared up only when I was in danger—and the first time I’d actually managed to tap into the power, for a few seconds at least.

“Damn fool thing you just did, Bryn,” someone opined, from behind me.

I didn’t bother turning around. At seventeen, I liked being called foolish about as much as I liked people treating me as if I was some fragile little butterfly, best kept under glass.

“I’ll live,” I replied. I’d spent my entire life surrounded by werewolves, whose animal instincts didn’t always line up with human ideas about “violence” and what was and was not an acceptable form of “conflict resolution.” Running in my bare feet wasn’t going to kill me.

“I don’t know,” my companion drawled, coming into view and rubbing the back of his hand roughly over his chin. “That mother of yours might kill you if you come in from the rain looking like that.”

“It’s not raining,” I replied, deliberately sidestepping the older man’s point about Ali, which was probably true. My foster mother was not enamored with the fact that, as the alpha of a pack of werewolves—the only human alpha in history—my life was pretty much the textbook definition of
dangerous
. Ali wouldn’t take too kindly to the idea that after seven and a half months of relative calm, I was willingly putting myself through the wringer.

Beside me, Jed said nothing, letting me mull over his words. Of all the people currently living at the Wayfarer, the old man was probably the only one who could have taken one look at me and known what I was up to—and why. Like me, Jed was Resilient. And human, which put him in the minority around here.

Reflexively, my mind went to a series of numbers ingrained in my very being.
Eight females. Ten males. Two humans.
The rest of the Cedar Ridge Pack was always there in my mind, their names a constant whisper in my subconscious. As alpha, I could feel each and every one of them—four-year-old Lily was waiting impatiently for Katie and Alex to wake up from their naps; Lake was spinning a pool cue around her fingers like a baton; Devon was in the shower, singing into a bottle of shaving cream at the top of his lungs; and Chase …

Chase was gone. Not for good. Not even for the night. He was checking in on the peripherals, the members of the pack who’d chosen to live at the edges of our territory instead of at the center. As much as Chase hated leaving me—leaving what we had together—I knew there was a part of him that felt the
distance as a relief. He wasn’t wired for pack living the way I was.

He was used to being on his own.

“Penny for your thoughts.” Jed’s voice was as gruff as always, but there was something about the set of his features—old and worn and wrinkled—that made me think he was being generous with his offer, that he didn’t need to pay a fictional penny for my thoughts when he understood why I’d been running fast and hard enough that I’d come close to throwing up.

“Things have been quiet,” I said finally, answering Jed’s question carefully. “They won’t always be quiet.”

And there it was. The reason I couldn’t just sit back on my haunches. There was a threat out there, and every day was like waiting for the guillotine to fall. I had to be ready. I had to do something. The rest of the pack trusted me to be prepared. They trusted me to make the right decisions, even when there wasn’t a right decision to be had.

They trusted me to lead, but I didn’t trust myself.

Sure, I’d make the decisions, I’d do whatever I could to make them safe, but at the end of the day, I was human. I was slower, weaker, more fragile—and if the previous year’s events had taught me anything, it was that to protect my pack, I might need to be something else.

Since I hadn’t heard word one from the werewolf who’d promised to Change me into one myself, that left only one option. I had a psychic knack. I had power. I just didn’t know how to use it.

“Seems to me, a girl like you could think of better uses for
quiet time than running around and getting her feet all cut up.”

I opened my mouth to reply, but Jed preempted the words.

“Seems to me, you could have asked someone.”

“For help,” I clarified, since Jed was a man of few words. “Asked someone for help.”

There were days when I relied on the rest of the pack as much as they relied on me, and days when the concept of help seemed
as foreign as the idea that most girls my age were just starting to look at colleges. Being an alpha was impossible and lonely and bigger than anything my human half might have wanted.

“I don’t need help,” I said softly, willing that to be true.

Jed rolled his eyes heavenward. “I’m not suggesting you go belly-up and ask your Weres for pointers,” he said. “I’d wager the ability works differently once there’s another set of animal instincts at play.”

Like Jed and me, many of the wolves in my pack were Resilient. At one point in time, they’d been human.

Just like I wouldn’t be anymore, once Callum made good on his promise to Change me.

In the distance, I heard a rumble of thunder. Looking up, I noticed the blue sky turning a dark and ominous gray.

“How’d you know it was going to rain?” I asked Jed.

He snorted. “I’ve broken just about every bone in my body at one point or another, Bryn. I can feel a storm coming from a mile away.”

Jed’s body was covered in scars. I’d gotten so used to seeing them that I barely noticed anymore, but his words reminded me he’d had a lifetime of experience coming out on top of fights he had no business winning.

If anyone understood that a few scratches were a small price to pay for what I was seeking, it was Jed.

Jed nodded, gazing out at the horizon, looking oddly at peace as it started to rain. “I’ll help you,” he said. “But we’ll do it my way.”

I was going to go out on a limb and guess that his way did not involve putting myself through hell in hopes of convincing my body I was under attack.

Jed gave me a look that said he thought I was constitutionally incapable of doing things any way but my own. Once upon a time, that might have been true, but now I’d do whatever it took to keep my pack safe. To be the kind of alpha they deserved and make sure that what had happened last winter never, ever happened again.

With nothing more than a nod in my direction, Jed began walking back toward shelter, but I just sat there, letting the rain beat against my body and thinking about a broken boy with hungry eyes.

A boy I’d invited into my pack.

A boy who’d tried to kill me.

Tracked by Jenny Martin
Knuckleheads by Jeff Kass
All In by O'Donahue, Fallon
Behind Palace Doors by Jules Bennett
Dating for Two (Matchmaking Mamas) by Marie Ferrarella
Auld Lang Syne by Judith Ivie
Zora and Nicky: A Novel in Black and White by Burney, Claudia Mair
Alpha Pack 7 - Chase the Darkness by J.D. Tyler
The Bride Wore A Forty-Four by Maggie Shayne
Revenge | A Steamy Mafia Bad Boy Romance by Rose Cody