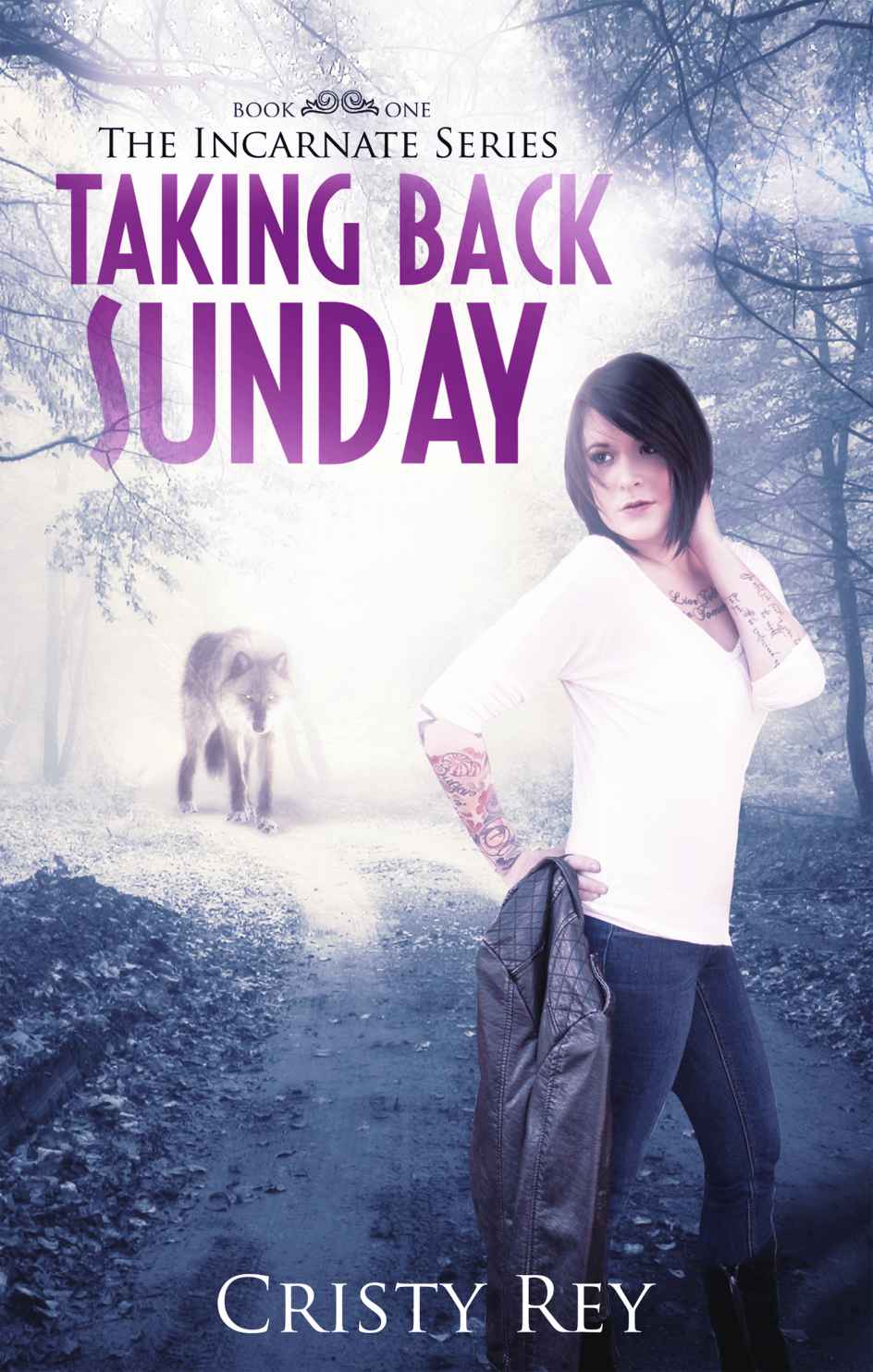 Taking Back Sunday (Incarnate Book One)

By Cristy Rey (aka Cristy Moran)

Taking Back Sunday Copyright © 2014 by Cristy Rey (aka Cristy Moran)

This eBook is licensed for your personal enjoyment only. This eBook may not be re-sold or given away to other people. If you would like to share this book with another person, please purchase an additional copy for each recipient. If you’re reading this book and did not purchase it, or it was not purchased for your use only, then please return to your favorite e-book retailer and purchase your own copy. Thank you for respecting the hard work of this author.

This book is a work of fiction. Names, characters, places, and incidents either are the product of the author’s imagination or are used fictitiously. Any resemblance to actual, locations or persons, living or dead, is entirely coincidental.

All rights reserved. Except as permitted under the U.S. Copyright Act of 1976, no part of this publication may be reproduced, distributed, or transmitted in any form or by any means, or stored in a database or retrieval system, without the prior express, written consent of the author.

This book is intended for mature adults only. It is not suitable for anyone under the age of 18.

Sunday’s tightly pressed lips barred her from unleashing a string of expletives and curses against Fate. For almost six years, she had managed to avoid the preternatural. No witches. No vampires.
No magic.
After just over a year of living in Columbia, South Carolina, it seemed her luck had run out. Fate reared its ugly head when her only two friends in the world outed themselves as witches. Almost two months later, Sunday sat with those very same friends, Kayla and Sammy, in Sammy’s kitchen. They’d been bugging her for months to join them to meet their coven. Usually, Sunday didn’t flinch when her friends talked shop. She let them go on to their hearts’ content, grinning, nodding, and staying mum while they talked. To Kayla and Sammy, Sunday’s nonchalance meant only one thing: she was a potential recruit for their coven. At first, the invitations to join them for esbat, or coven reunions, were gentle nudges. Months later, their requests had grown more blatant. In the last week, they’d become relentless.

Silently grinning and bearing it was Sunday’s usual go-to avoidance tactic, but that method had lost its effectiveness. At this point, she was well past tiptoeing around their invitations. Explaining to her friends why she
couldn’t
join some stupid, probably lame, and innocuous coven was the last thing Sunday wanted to do. As her friends’ involvement with their coven increased, rejecting them outright meant threatening their friendship.

For Sunday, witchcraft wasn’t something that quiet, happy mundanes engaged in while someone else baked scones. Witchcraft was something real and potentially extremely dangerous. Sunday was the Incarnate, a purported god-kind and preternatural conduit of magical and mystical forces. It was the bane of her existence, and for years, since breaking from the servitude of the most powerful witch in the United States, Sunday had run free and clear of all Fate’s designs for her. She’d been running non-stop for six years when she landed in Columbia. There, she found the only thing she’d ever wanted for herself: the chance to live a normal life, a life of being something other than the Incarnate.

Of course, her normal life with her normal friends was turning out to be anything but. As Kayla and Sammy flipped their twin golden ponytails and sipped from their mid-morning coffees, they stared at her with expectant eyes and eager smiles.

“You really need to come with, Sunday,” Kayla said. “It’s not what you think. It’s less ‘Satan’ and more ‘knitting circle’, except with no knitting and more chanting.”

Kayla and Sammy shared knowing smiles, pleased with the former’s description of their coven. Placing her coffee mug on the table, Kayla leaned onto her elbows and twirled a long strand of hair around her finger. Brows pinched and eyes narrowed, Kayla searched Sunday’s expression as she considered ways to make her offer more enticing. Sunday was sure that if she stared into Kayla’s eyes, she would see the wheels spinning.

“It’s like…” Kayla’s voice stalled as she came up empty-handed. She quickly looked to Sammy with a silent plea for help.

“It’s like magic,” Sammy continued. When she said
magic
, Sammy raised her hands and wiggled her fingers, miming butterflies fluttering away. As trite as the gesture was, Sammy’s lips fixed into a tight line and her jaw set tight.

Magic.
Sunday forced a grin as she gulped hard. Could she have expected any different? No matter how far she ran or how hard she tried to escape it, Fate nipped at her heels. If Kayla and Sammy weren’t her only friends, perhaps Sunday would have packed up her things and left Columbia the minute they confided in her for the first time. “You’ll probably think we’re flakes, but we’re Wiccan.”

“I just don’t think there’s any point to my going along. It’s really not my thing,” Sunday mumbled. She dug her fingers in her hair and looked up at her friends with pleading in her eyes.

“You don’t
know
if it’s your thing—” Kayla started with a smile.

“
Yet
.” Sammy beamed, her eyes wide and sparkling, and a broad, bright smile painted across her face.

“It’s
white
magic, not
black magic
,” Kayla explained for the umpteenth time in the last year. She tried to place her hand on Sunday’s for encouragement, but Sunday quickly pulled away and dropped her hands to her lap.

Since Sunday was sorely out of practice at blocking other people’s emotions, she had made it known that she didn’t like to be touched. If only she could manage physical contact with people, then Sunday could minimize the pains it took to control her ability.

Sunday hesitated, half-stammering as she offered yet another roadblock.

“I really don’t see why it’s such a big deal that I don’t want to go.”

Sammy narrowed her gaze and sat upright in her chair. Kayla crossed her arms and furrowed her brow. They were putting on a united front against Sunday. For her part, Sunday could do little more than slouch her shoulders and nervously chew on her lip.

“You never talk about family or any other friends. You may not think that you need it, but you do.
You’re lonely
, Sunny, and as your best friends, we’re not okay with it.”

Sammy looked to Kayla for acknowledgement, and Kayla provided a sharp nod in return.

“This is how we can help you. The coven is a sisterhood. They can be your friends
and
your family. It’s like when I tell the kids that the Cub Scouts is an extension of their support system. That’s what we’re telling you about the sisters. You don’t have anyone else, and that’s just not right. Everyone needs a support system.”

Pulling her hand through her short hair and dropping her head, Sunday considered her options. Neither Kayla nor Sammy was an innately gifted witch. For that, Sunday was supremely grateful. What they lacked in sensitivity to the preternatural was indeed a lucky strike. They couldn’t possibly know what was truly out there. If they did, they wouldn’t have invited Sunday into their lives, certainly not into their homes. Sunday wanted her friends to believe that she was a mundane person, wholly unaware of, untrained in, and naïve about magic. If they could gauge her predicament, they would be curious, and in this case, curiosity was dangerous.

For as long as she could remember, friends were a pipe dream for Sunday. Being the Incarnate meant superficiality and secrecy were necessities. Relationships didn’t bode well given those limitations. For nearly a decade, Sunday ran from everything that she truly needed: stability, security, and sanctity. Most of all, Sunday craved companionship. Having finally found that with Kayla and Sammy, the last thing she wanted was to disappoint them.
Not
participating in the coven was doing just that.

Coincidence or Fate, there was no hiding from the tendrils of the preternatural world for Sunday. It would always find her. Were it a book club, Sunday would’ve been there with bells on after their first invitation. It had taken twenty million invitations, she guessed, but she finally would accept. Resignation was less a choice than it was Sunday’s last remaining option. Not wanting to lose them, Sunday sighed in defeat.

“Okay,” Sunday finally answered. “Give me details.” She chewed on the inside of her cheek and forced down the inevitable well of tears rising to the surface. Giving up left a bitter taste. Looking away from her friends was the only way she could keep from crying.

Kayla and Sammy sprang from their seats and pulled Sunday into their arms. The elation radiated from their bodies and poured into Sunday’s own. She struggled to stifle the effects of it to ensure that she contained it rather than dispersed it. Because she was out of practice, she had to work doubly hard to keep her shields up.

Through the cascade of Kayla’s bleach blonde hair, Sunday focused on a spot on the kitchen wall, and as if bracing her hands against it, pushed back into herself. Arms squeezed her waist and chest, hands brushed over the back of her head, and their tremendous excitement drenched her.
That spot on the wall.
Sunday pushed back.
Push harder. Contain it.
It was all about containment. Lightning in a bottle.

As the women attempted to pull away, Sunday strengthened her grip, and willed them to calm down before she could let them go. It took considerable effort, and for that reason, Sunday rarely found herself in a situation like this. They couldn’t have known how Sunday strained to handle their contact, and they would never know, because Sunday would never tell them.

When Sammy’s husband, Carl, walked into the kitchen, Kayla and Sammy startled and jumped back before Sunday could put their emotions to rest. As panic filled her, she lost her grip on the emotions she’d absorbed from them. On the counter below where she’d focused her efforts, the toaster jumped, pulled its cord from the socket, and slammed into the wall, sending a spray of sparks before landing on its side. Sammy and Kayla yelped as Carl rushed to grab a spatula and bang it to death. Sunday finally managed to gather her wits about her and forced herself to relax with slow, steady breathing. As her heart rate settled, the toaster stilled. Carl smacked it two more times before he was certain the danger had died down. Exasperated, he looked at the women huddled by the table.

“Is everyone okay?” he asked, gasping for breath. Fear drenched and confused, Carl appeared well out of his depth.

The women beside Sunday were reeling from their shock. Kayla’s hand trembled slightly. Suddenly, Kayla and Sammy broke out in nervous laughter.

“Thanks for saving us from a toaster, big guy!” Sammy teased. “Husband and total dragon slayer. How did I get so lucky?”

The tension washed out of the room as they took in the ridiculousness of the situation. Everyone laughed, including Sunday, but Sunday’s laughter wasn’t like the rest. The more she forced it, the closer she came to heaving. It was a complex dance. If she didn’t maintain an even-keel, a wild toaster was the least of the damage that she could do. Very rarely, Sunday reminded herself, does an explosion of energy result in the raining of rose petals on a crisp autumn afternoon.