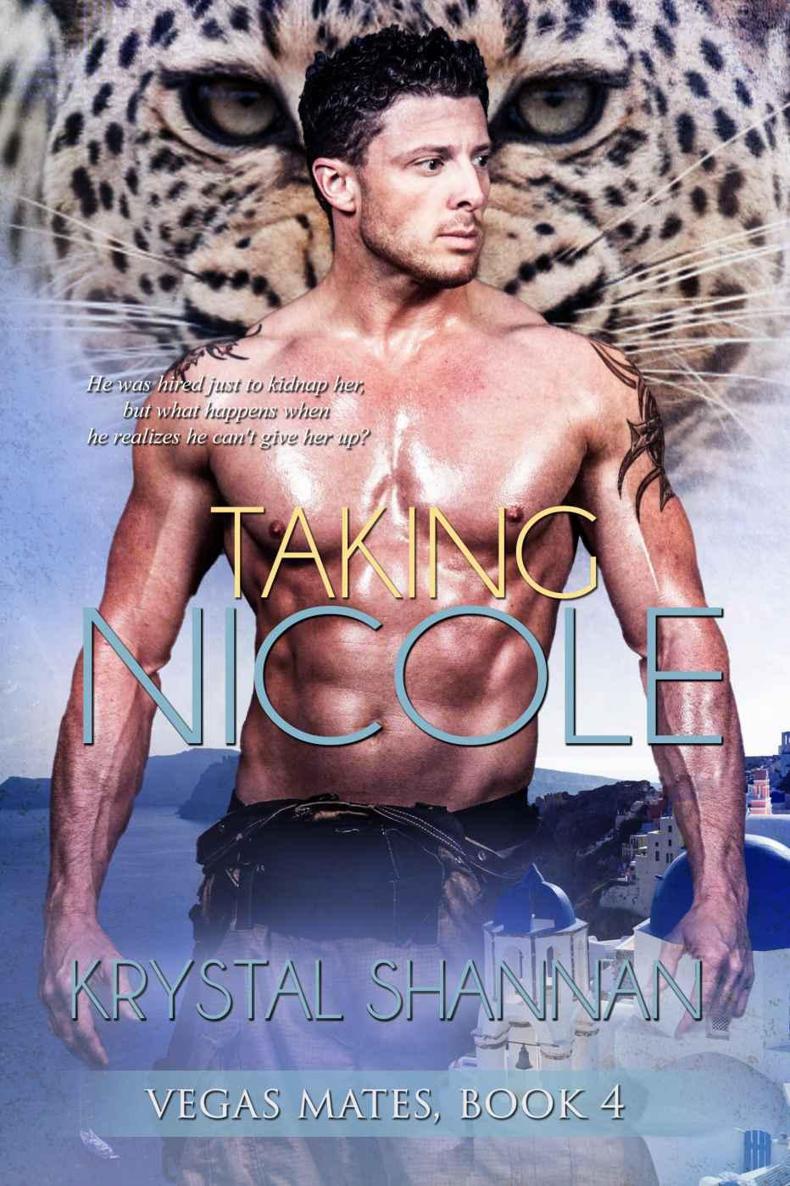 This book is a work of fiction and any resemblance to persons –living or dead –or places, events, or locales is purely accidental. The characters are reproductions of the author’s imagination and used fictitiously. This book contains content that is not suitable for readers 17 and under.

Please be aware that this book cannot be reproduced, scanned, or distributed in any printed or electronic form without written permission from the author, Krystal Shannan, at [email protected], or within the sharing guidelines at a legitimate library or bookseller. Please do not participate in or encourage piracy of copyrighted materials in violation of the author’s rights. Purchase only authorized editions.

WARNING: The unauthorized reproduction, sharing, or distribution of this copyrighted work is illegal. Criminal copyright infringement, including infringement without monetary gain, is investigated by the FBI (http://www.fbi.gov/ipr/) and is punishable by up to five years in a federal prison and a fine of $250,000.

I am so blessed to have the friends and family that I do. I want to thank my readers from the bottom of my heart. I couldn’t have gotten to this point without you. To the men and women that helped me get to this place. You are so special to me -April London, Anne Welch, Kim Wade, Kristin Nicholas, Liliana Hart, Catrina Barton, Erin Dameron-Hill, and my new and fantastic editor Cynthia Mendez! To my Squadron. I can’t thank you enough for all the help and support you’ve given me over the last two years. It’s been amazing and I’m looking forward to many more years of friendship.

The plane’s vibrations awakened Nicole Demakis. She didn’t remember going to sleep. The last thing she remembered was getting in the car with
him
and driving away from the cabin outside of Logan, Utah.

Her eyes flew open and she nearly came out of her seat. They were in an airplane now! He was sitting across from her, watching intently. Flecks of gold sparkled in his brown eyes. The smell of feline filled her lungs, but her wolf remained surprisingly calm. The idea that magick had matched her with another species didn’t really bother Nicole, either. She’d wanted to find her true match, and she had. But instead of claiming her, he was taking her to her estranged grandparents where she would be given away at some ritualistic, barbaric ceremony.

Now someone else will claim me.
Shit!

“How long have I been out?”

“About twenty-four hours. We are well on our way to Greece.” His voice rumbled deep in his chest, making the hairs on her neck stand on end.

Her magick rippled and sparked, reaching for him. It took every ounce of control to remain in her seat. She had to play it cool. Throwing herself at him was
not
playing it cool.

He shrugged and looked out the small, round window to his left. “It was easier.”

“He is our mate.”
Her wolf stretched inside her mind, waking from the drug.

I know. But knocking me out still makes him a coward.

“We need him to want us, Nicole. Not hate us. He’s the only way out of this whole mess.”

That shouldn’t be too hard.

Her wolf chuckled. She wasn’t the only one who could smell his arousal and hear his heart racing. He was as good as seduced already.

To hell with it!
She slid from her seat and moved the short distance between them on her knees. His eyes widened and his pupils dilated as Nicole slid her hands up his thighs and inhaled his sandalwood scent.

Attraction was not a problem. She’d been drawn to him the first time she’d seen him —the parking lot in Logan where they’d fought and he’d stolen Sarah. When they touched for the first time, the connection started to build. It was the way the magick worked. He couldn’t avoid it for long, and she had no intention of letting him.

The last thing she wanted was to mate some prick and live for centuries knowing her true mate had been just within reach, if only she’d taken a chance.

His thighs tightened beneath her fingers. Even through the thick denim of his jeans, she could feel the tension.
Resistance is futile.
I will make sure of it.
She eased her hands closer to the growing bulge.

“No.” He snatched her hands and moved her back to her seat in one fluid movement.

“No?” She twirled her hair and opened her legs wider, inviting him in. It was too bad she wasn’t wearing a skirt. Jeans weren’t nearly as accessible. “You’re my mate, kitty cat, and I don’t even know your name.”

He snarled and wrapped his hand around her throat. His fingers tightened, but not enough to restrict her breathing. Their eyes met and she held his glare. If he thought he could intimidate her, he had another thing coming. Nicole Demakis didn’t take anything lying down.

“Except maybe a man,”
her wolf teased.

Shut it! You’re not helping.

Magick flared around Nicole and her wolf pushed outward, reaching toward him.

“I am no kitty cat,” he firmly stated. His eyes glowed bright gold and his nostrils flared.

Pleasure ran through her senses akin to savoring a sweet piece of dark chocolate. She’d ruffled his fur.
Awww ... tough shit!
She smiled and batted her eyelashes, knowing full well exactly what he was.

Fangs lengthened in his mouth and his claws scraped against her neck. It might have scared her if she hadn’t known how aroused he was. But now, his show of dominance just turned her on more. She didn’t mind playing rough.

“I'm a leopard, not a house cat.” His voice was deep and silky like her satin sheets at the inn. His dark hair rolled in waves nearly to his shoulders. And that olive complexion with a sexy five o’clock shadow whispered of Mediterranean descent.

She parted her lips and ran her tongue slowly across them. His eyes tracked the movement and his grip tightened around her neck. She relaxed her body, giving no resistance to his hold on her. She directed her gaze to his now semi-glowing eyes, meeting his glare with courage. Just like everything else, she would face him head on.

Right now, what she really wanted was a kiss. Growling and irritated cat be damned, she was taking one. She leaned forward and pressed her lips softly to his. He didn’t pull away, but he didn’t reciprocate either. She flicked her tongue along his lips, moistening them. He tasted so good. She pulled his bottom lip into her mouth, sucking gently, then nipping for good measure. His body had hardly moved, except to relax his grip on her throat.
Well, damn.

She pushed him harder, pressing her tongue into his mouth, being careful to avoid slicing it on his still-extended fangs. A growl rumbled from his chest and he leaned forward, taking control of the kiss and pinning her firmly into her chair.

I told you it wouldn’t be hard.
She smiled against his mouth.

Their tongues danced together, each working to take control. Nicole didn’t back off. She was used to being in charge and had no intention of letting this feline mercenary just drop her off with Grandma and Grandpa Antipas. Not without winning him to her side of the rebellion first.

Instead of more contact, he released her hand and backed away.

“Hungry?”
Her wolf’s snarky tone only pissed her off more.

“The only thing better than sex with the Adonis in front of me would be a nice fluffy fried donut!” she snarled, then clamped her hand over her mouth.
Shit!

Her wolf’s laughter rang in the back of her mind.

She glared at the man only a few feet from her. He raised an eyebrow, but didn’t speak. She’d give her right arm to hear inside his head. What was he thinking? Considering? Would he really hand over his true mate to be hunted by other men?

“I don’t suppose you have any donuts on the flight menu, since you’ve apparently decided I’m off yours.”

He crossed his arms, apparently unimpressed with her attempt at humor.

Damn it!
She sighed. This was going to be a long flight.

Kicking off her shoes, she tucked her feet beneath her and leaned back in the large, comfy captain’s chair.
New tactic.
If he didn’t want her, he wanted something else. Everyone in this world had a price. The trick was figuring out what it was. She was willing to pay anything to stay out of the clutches of her royal grandparents.

“What do my grandparents have over you? Why are you willing to sacrifice your sanity and happiness by abandoning your true mate?”

A sigh slipped from him and he returned to the chair across from her. “My sister.”

A pang of understanding cut its way through her heart. She knew what it was like to sacrifice for family. Hell, she’d sacrificed for a girl who wasn’t family when she’d agreed to come to the cabin and leave with him. But even though Sarah wasn’t blood, she was pack. And pack was family. Blood didn’t matter in the her pack. After what happened with her sister Samantha’s hunt, her father had joined his sister and brother in the rebellion and had broken ties with the Council.

“All the royal families force loyalty by holding family members as collateral,” he said. “Nothing says ‘don’t screw up’ like holding an ax to the throat of a loved one.”

Her back stiffened and she tightened her grip on the armrest of her chair.
So that’s his price.
The Council was a little archaic in its practices, but kidnapping and extortion sounded a bit far-fetched. Though it explained why her grandparents had a cat shifter in their employ. Cats weren’t known for their loyalty to wolf families, and vice versa.

“That’s not how it works where I’m from.”

He scoffed. “Don’t tell me your royal parents didn’t have plenty of men who worked for them without question.”

“Of course they did. But their families were part of the pack. They were protected, just like the rest of us. Nobody’s life was threatened and no one was forced to stay if they wanted to leave.” Her jaw tightened and she narrowed her eyes. “My sisters and I are the only ones unable to escape this family. No matter how far we run, it’s never far enough.”

He winced under her bitter tone. It couldn’t be helped. It was her life for his sister’s. Allowing Nicole Antipas Demakis her freedom was a price he was unwilling to pay. He hated the Antipas family with every ounce of will he possessed. He had wanted to hate Nicole, but from the very first moment he’d seen her in that out-of-way town in the Teton Mountains, he wanted only one thing—to possess her.

Recognizing her as his true mate had buried his hatred. Now he felt only pain. Pain that he had no choice but to turn her over to her grandparents. Pain that he was causing his true mate anguish and suffering. Pain in knowing they would both suffer when she was bonded to another.

His leopard paced angrily in his mind, refusing to speak to him since taking Nicole in Utah.

Her blue eyes flashed, flecks of gold glowing brightly in them. “You won’t even try.”

The Life of Super-Earths by Dimitar Sasselov
Reveal Me by Cari Quinn
Little Rainbows by Helena Stone
Pep Squad by Eileen O'Hely
Snowbound With The Baronet by Deborah Hale
The Forest's Son by Aleo, Cyndy
Romance: Edge of Desire by Sloan, Kelli
Mastered By The Mavericks by Angel Payne
System Seven by Parks, Michael
Lucky Bunny (9780062202512) by Dawson, Jill