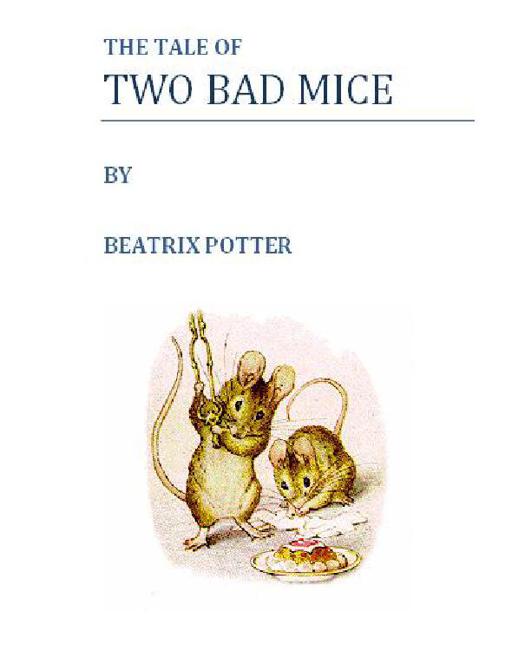 Beartrix  Potter(1866-1943) - is one of the most notable authors of children's literature. Fairy tales, those created by her about animals, which were self-illustrated with graceful and tender water colors, are notable for delicate lyricism and soft  humour.  For the whole world's children she has completed 23 books with her fairy-tales. This is one of them.

The tale of two bad mice
By Beatrix Potter

ONCE upon a time there was a very beautiful doll's house; it was red brick with white windows, and it had real muslin curtains and a front door and a chimney.

It belonged to two Dolls called Lucinda and Jane; at least it belonged to Lucinda, but she never ordered meals.

Jane was the Cook; but she never did any cooking, because the dinner had been bought ready-made, in a box full of shavings.

There were two red lobsters, and a ham, a fish, a pudding, and some pears and oranges.

They would not come off the plates, but they were extremely beautiful.

One morning Lucinda and Jane had gone out for a drive in the doll's perambulator. There was no one in the nursery, and it was very quiet. Presently there was a little scuffling, scratching noise in a corner near the fireplace, where there was a hole under the skirting-board.

Tom Thumb put out his head for a moment, and then popped it in again.

A minute afterwards Hunca Munca, his wife, put her head out, too; and when she saw that there was no one in the nursery, she ventured out on the oilcloth under the coal-box.

The doll's house stood at the other side of the fireplace. Tom Thumb and Hunca Munca went cautiously across the hearth-rug. They pushed the front door — it was not fast.

Tom Thumb and Hunca Munca went up-stairs and peeped into the dining-room. Then they squeaked with joy!

Such a lovely dinner was laid out upon the table! There were tin spoons, and lead knives and forks, and two dolly-chairs — all so convenient!

Tom Thumb set to work at once to carve the ham. It was a beautiful shiny yellow, streaked with red.

The knife crumpled up and hurt him; he put his finger in his mouth.

"It is not boiled enough; it is hard. You have a try Hunca Munca."

Hunca Munca stood up in her chair, and chopped at the ham with another lead knife.

"It's as hard as the hams at the cheesemonger's," said Hunca Munca.

The ham broke off the plate with a jerk, and rolled under the table.

"Let it alone," said Tom Thumb; "give me some fish, Hunca Munca!"

Hunca Munca tried every tin spoon in turn; the fish was glued to the dish.

Then Tom Thumb lost his temper. He put the ham in the middle of the floor, and hit it with the tongs and with the shovel — bang, bang, smash, smash!

The ham flew all into pieces, for underneath the shiny paint it was made of nothing but plaster!