Read Talk Sweetly to Me Online

Talk Sweetly to Me 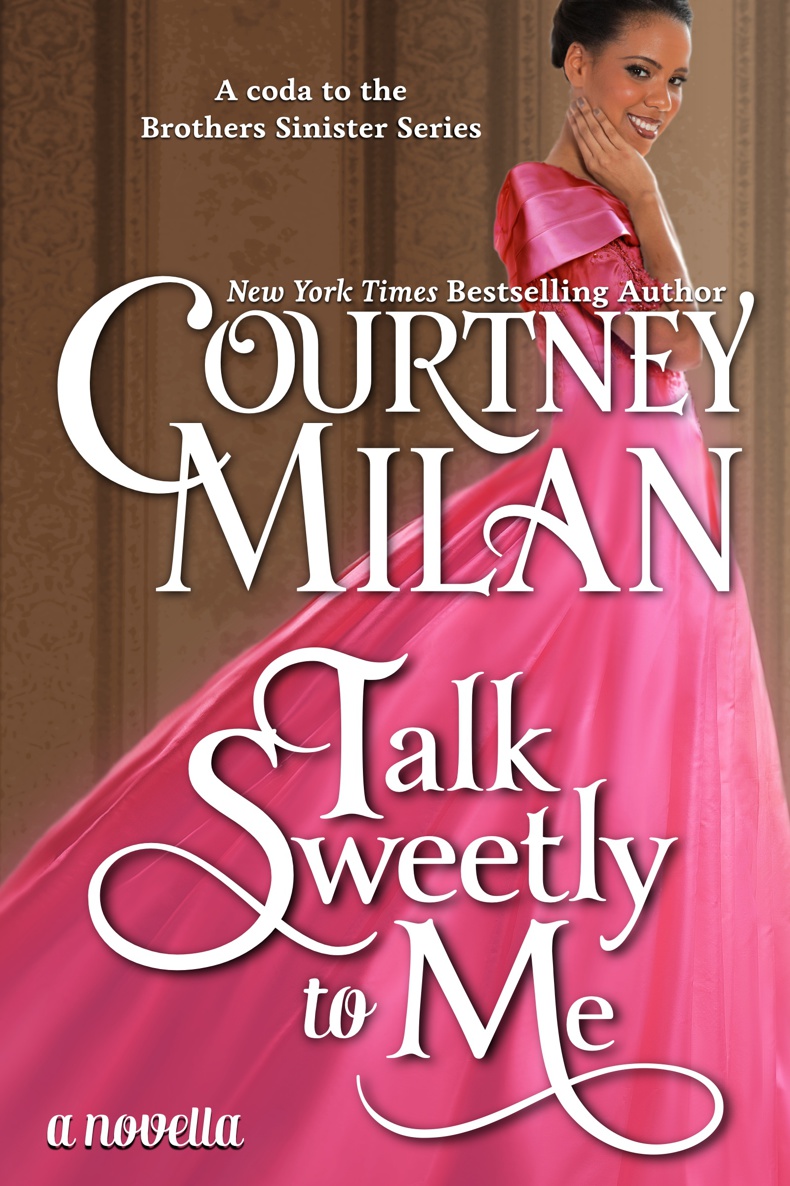 Other Books by Courtney Milan 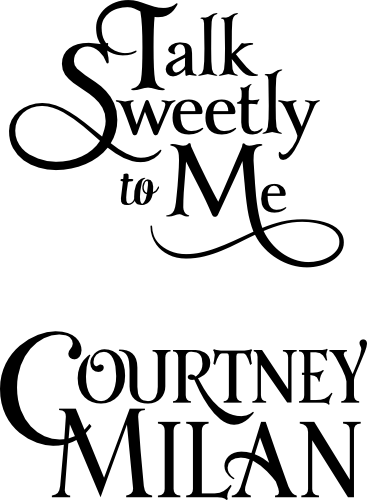 For Lucas, my partner in crime, clock-breaking, and quantum mechanics.

T
HERE WAS NO WAY FOR
Miss Rose Sweetly to set down her packages. All six of them were balanced precariously under one arm while her free hand fumbled through her pocket. Her fingers encountered used pencil nubs and a letter folded in half; her burdens shifted slightly, sliding away… If that dratted key ring was not in this pocket, and in the opposite instead—ah!

Thumb and forefinger met cold metal. Rose was withdrawing her find in triumph when a voice interrupted.

The sound of Mr. Shaughnessy’s voice—that lilting velvet—set the inevitable in motion. First the book wrapped in paper slipped; then, as she grabbed for that, her notebook began to fall. She could compute the physics of it in her mind, a cascading avalanche of packages resulting from too few hands and too much gravity. Rose had time to make only one decision: save her slide rule or save the shopping?

Her slide rule won. She grabbed hold of the leather case with her fingertips just before it hit the ground.

Her other burdens were not so lucky.
Splat
went the book. The shopping landed with a more complex sound—one that smacked of breaking eggs. Three oranges escaped the bag entirely and bounced crazily down the pavement.

Mr. Stephen Shaughnessy stood two doors down from her. His eyebrows rose at this minor catastrophe, and Rose felt her cheeks heat. But there was nothing to do now but brazen it out.

She gave him her most brilliant smile and waved her slide rule case. “Good afternoon, Mr. Shaughnessy.”

The case slipped slightly, but she managed to catch it before an even greater disaster ensued.

Mr. Shaughnessy had taken the house just down from her sister’s three months ago. In all that time, she’d never managed to shake the nerves she felt around him. He had never done anything to warrant that nervousness, unfortunately; he was unfailingly polite.

As proof, he didn’t abuse her for her clumsiness now. He didn’t even remark on it. He simply came toward her. He took three steps forward—and she drew back one—before she realized that he only intended to pick up her oranges.

Any other reason he might have drawn close to her? That was all in her imagination.

She set down her slide rule carefully and picked up her shopping bag. It was canvas, and most of the contents hadn’t spilled. The meat, wrapped in waxed paper, was still at the bottom. The eggs…well, she’d check them once they were inside, but she had a sneaking suspicion that she and her sister would be having omelets for dinner tonight. Only the fruit had truly gone awry. She picked up an apple, not looking in his direction.

But she didn’t have to look directly at him to be aware of him. Mr. Shaughnessy was a young man—scarcely a few years older than she. He was tall and built on lovely, well-muscled lines, the sort that young ladies who intended to stay innocent were not supposed to notice. He had a friendly smile, one that made a woman want to smile in response, and the faintest hint of an Irish accent. He had dark hair, dark eyes, and a much darker reputation.

But he picked up one of the offending fruits and smiled in her direction. “Why is it that the oranges bounced, but the apples did not?”

His smile felt like an arrow, one that struck her straight in the solar plexus. And so Rose adjusted her spectacles on her nose and said the first thing that came to mind.

Unfortunately, the first thing that came to mind was…

“It’s Newton’s Third Law. Upon collision, the apple exerts a force on the pavement, and so the pavement must exert an equal and opposite force on the apple. The structure of the apple is inelastic and so the apple bruises. The orange, by contrast…” She swallowed, realized that she was babbling, and shut her mouth. “I’m sorry, Mr. Shaughnessy. I don’t think that’s what you meant to ask, was it?”

He straightened. Oh, he was dreadfully handsome. He put a casual care into his appearance, and it showed. He was clean-shaven, even though it was three in the afternoon. His cravat looked as crisp as if it had been pressed just now, not at six in the morning. Nothing about Mr. Shaughnessy suggested that he was a degenerate of the first order. Nothing, that was, except his line of work and the persistent gossip in the papers.

“You don’t need to let me natter on when I get distracted that way,” she told him. “Everyone else stops me. In these parts, it’s considered polite to interrupt Miss Sweetly when she’s on a tear.”

“Nonsense,” Mr. Shaughnessy said. He took a step toward her, and then another. Her chest constricted—he was standing so dreadfully, deliciously close—and then he held out the oranges he’d gathered.

For one moment, as she took them from him, their hands brushed. Neither of them was wearing gloves: she, because she couldn’t have found her keys while wearing them; he because…well, the heavens alone knew, and she was not about to ask. His fingers were warm and pale against hers.

“I would never interrupt you,” he told her. “I love it when you talk Sweetly to me.”

She yanked her hand away. “You mustn’t say things like that, Mr. Shaughnessy. Someone might overhear and mistake your meaning.”

His eyes met hers. For the briefest second, she imagined a spark in them—as if some imp inside him whispered that anyone who heard what he’d said would understand it perfectly. He’d intended to flirt, and he knew precisely how he’d flustered her.

But he didn’t say that. He simply shrugged. “We wouldn’t want anyone to misunderstand.”

If there had been an ounce of sarcasm in his voice, she would have walked away right then and there. But there wasn’t.

“So let me say it better. If I didn’t want to hear you talk about your opposite and equal reactions, I wouldn’t ask about your star charts. What are you computing this time?”

“Oh, it’s not star charts, not today. It won’t be star charts for months. It’s the Great Comet now, and it’ll be the transit of Venus after that.”

“Do you not read any scientific papers? It may be the brightest comet ever observed. You can still see it with the naked eye against the sun itself.”

He glanced upward at the sun overhead, unobscured by any cometary tail. “If you can see it with the naked eye, how is it that I’ve never caught a glimpse of it?”

She huffed. “Because London is not in the Southern hemisphere. The visibility here is not as it is in Melbourne, for instance.”

“In any event, Finlay in Cape Town wired his measurements to Dr. Barnstable, and he’s set me to do the computing.”

She got out her notebook, opened it to the appropriate page.

“Here we are. The comet transited the sun a month ago.”

He stared for a moment at the column of numbers she was pointing to, and then gave his head a shake. “Right.”

She felt herself flush again. But before she could manage to work up a good case of embarrassment, he had interrupted her, pointing to an orange in her bag.

“So let’s say that is the sun. Then where is the comet?”

“Don’t be ridiculous, Mr. Shaughnessy. If that orange represents the sun, we here on earth would be standing seventy-one feet away.”

“Seventy-one point five eight three, by the last measure of the distance between the earth and the sun, but I try not to be pedantic. It makes people laugh at me.” Rose pointed to a dot on her notebook page. “Imagine that
this
is the sun. Then we are a speck of unimaginable smallness here.” She indicated a spot some inches away. “The comet, then, traveled along this path…” Her finger, dark against the white page, etched an elliptical curve. “But that’s not the exciting part. You see, anyone can calculate the path of a comet given enough data.”

“Not anyone,” he murmured.

She waved this away. “From all accounts, the nucleus of this comet split sometime after perihelion. Dr. Barnstable believes that we can predict the path of each piece—and since they’re so close to each other now, it will be no simple matter. It’s a three-body problem, which means it’s impossible to solve with equations. He’s asked me to work it out for him.” She beamed up at him.

“Of course,” she started to explain, “we’ll be wrong, but it’s
how
we’re wrong that is most exciting. You see—”

The door opened behind them. Rose jumped again. This time, she managed to keep hold of her shopping bag. She turned to see her sister standing in the doorway. Patricia had one hand on the door handle; the other was placed in the small of her back. She was wearing a voluminous pink gown and a matching kerchief covering her hair. Her eyebrows rose at the scene in front of her, but her dark eyes sparkled in amusement.

“And here I thought I heard you at the door ages ago,” Patricia said. She gave her a head an exasperated shake, but Rose was certain—mostly certain—that she smiled as she did it. Patricia stooped as best as she could. Her heavy belly made her awkward, but she plucked Rose’s key off the ground. “Ah. I see that I did.”

“I…dropped some things,” Rose said, flushing all over again. “I was picking them up.”

Patricia looked at Rose’s notebook, open in her hands. She looked at Mr. Shaughnessy, standing not two feet away. And then she glanced at the pavement, where Rose’s other packages—the mail, the paper, the wrapped-up book—still lay scattered. “Yes,” she said dryly. “I can see that. That explains everything.”

“Mr. Shaughnessy.” Rose nodded her head. “I would curtsey, but the apples cannot withstand another inelastic collision.”

Beside her, Patricia made a noise in protest. But she held out her hands, gesturing. Rose gave her the book and her slide rule case. While Mr. Shaughnessy disappeared around the corner of the street, she picked up the last of her scattered things.

Patricia did not berate her immediately. She did not, in fact, berate her at all. She would normally have offered to help Rose, but she was eight months pregnant, ungainly and awkward, and bending over did not come easily to her. When they’d gathered everything, they retreated inside the house—Rose at a walk, Patricia at a waddle.

Patricia did not say anything as they traversed the front drawing room and went into the back pantry. She didn’t speak until Rose had the shopping spread out in front of them.

“Rose,” Patricia said quietly, “have you considered going back to Papa?”