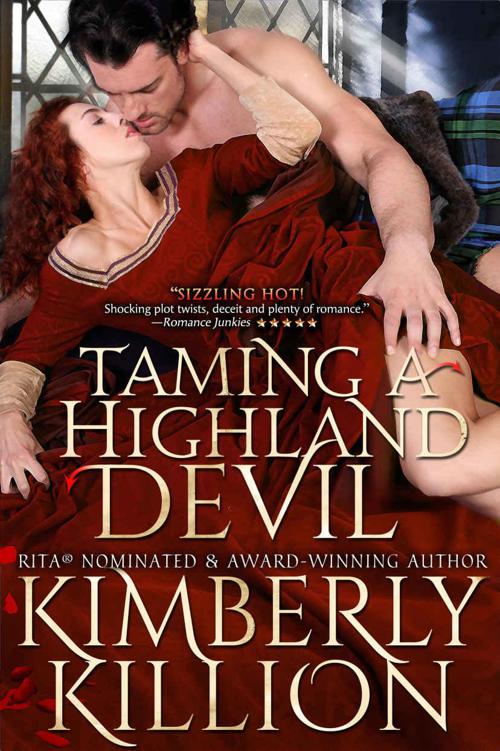 I would like to dedicate this book to Gerard Butler for being my inspiration.

Laird Magnus Sutherland loved women. Tall women, petite women, thin and thick women. He loved the svelte texture of their skin and the way they purred when he pleasured them.

Blondes, brunettes, raven-haired beauties all appealed to him, but he was partial to redheads—as was the case this night. The maid impaled on his cock had wide hips and enough flesh on her backside to fill his palms as he guided her up and down the length of him. He wet her nipple with the tip of his tongue then blew on it just to feel her shiver. “Do ye know what’s better than having a willing woman in my bed?”

“Having two?” A second redhead drew up beside him and pulled his hand to her wet cunny. She sucked air between her full lips when he dipped two fingers inside her silken flesh.

“Aye,” he agreed wholeheartedly and filled her mouth with his tongue. It thrilled and delighted him to feel them quiver at his touch, to hear them whimper and moan. S’truth, he oftentimes gained more satisfaction in bringing them to climax than finding his own release.

Women were such innocent creatures, so unaffected by politics and war, which was the other reason he kept company with so many of them. They made him forget the battles, the bloodshed…the guilt.

The single candle he’d left burning outside the bed drapes provided him with enough light to perform. Unfortunately, the darkness prevented him from seeing the details in their expressions. He wished he could see the ecstasy lining their faces, but hiding his scars was essential in keeping his bedmates aroused.

Since he knew neither of their names, he’d decided to call the one riding him Heather, for she smelled like a field of flowers. And the minx grinding her pelvis against his hand, he’d named Honey as that’s what she’d tasted like when he’d suckled her to orgasm.

“’Tis my turn.” Honey nipped his earlobe and ran her small hands over his hairless chest.

“Nay, please,” Heather whined in protest as he laid her atop the silk coverlet. “I’m nearly there.”

She didn’t lie. He’d felt her muscles clenching his cock, as well as the shivers racking her body. However, Honey gave him little choice in the matter when the brazen wench sprawled out atop Heather, face to face, tit to tit and clit to clit.

“Fear not my wicked lovelies.” He stepped off the bed, grinning. “I’ll not disappoint either of ye.” He repositioned them at the edge of the bed and admired the twin pair of pink swollen nocks glistening in the light of that single candle flame. He then pleasured them in unison, giving one his fingers and the other his thumb until his own clawing need demanded he take them.

Lifting Heather’s knees provided him the perfect angle to drive his manhood deep inside one, only to pull out and thrust into the other. They were hot, slick, tight and demanding.

Determined to satisfy, he ignored the burning in his bollocks and set a rhythm that might kill the average man, but Magnus was far from average. He’d built up his stamina over the years which had earned him the name Devil of Dunrobin. ’Twas not a name his mother was proud of, but in the twenty-seven winters since his birth, he’d not once received complaint from the maidens.

“Oh, aye, m’laird! Aye!” When Heather once again reached that shattering edge of bliss, he pulled Honey off the bed by her hips and bent her over, setting her mouth in alignment with Heather’s ripe clit. He didn’t have to tell them what to do. Need controlled them now. They would do anything to find release. He thrust deep and fast into Honey’s silky canal as she tongued Heather to climax. Soon, both women trembled, screamed, then withered, sated and satisfied.

Magnus, however, was still raging hard and eager to be rewarded for his services. He dove back into the bed, propped himself against the bolster and laced his fingers behind his head. “Now finish me.”

They pleasured him with their mouths, curling their tongues around his cock head, licking the throbbing shaft, forcing the length of him deep into their throats one at a time. ’Twas good to be laird, he decided as he shot his seed into their awaiting mouths. He was the king of Dunrobin Castle and Chieftain of Clan Sutherland. No one owned him. No one told him what to do.

A fierce pounding shook the door in its frame. “Maggie!”

No one, except his mother.

Magnus blew an audible breath and rolled his eyes when the maids launched out of his bed in search of their garments. He’d dismissed his warriors from the training field hours earlier. His uncle was abed. The keep was secure with the night watchmen in position on the wall. There was naught that required his attention that couldn’t wait ’til morn.

“Maggie!” Mam screeched again and beat on the door. “Quit friggin’ the bluidy maids and get your arse out here at once!”

Grumbling, he snatched his
plaide
off the back of a chair, draped it over his person, then ripped open the door in a fury. “What is it?”

Red-faced, Mam tossed her silver-streaked brown braid over her shoulder, punched her fists onto her hips and glared at him with irate dark eyes. “The Mackay has arrived, and he’s brought your betrothed.”

They were perfect for one another, Effie decided as Laird Sutherland entered the Great Hall. Four of his kinsmen trailed him, all braw and thickly built, but none possessed the chieftain’s dominating presence. Hair, black as a raven’s eye, lay disheveled about his shoulders with a braid falling from each temple to mark his status. A sea-green and pale blue
plaide
, perfectly pleated, draped over a clean
léine
shirt, but what impressed her most was the arsenal he wore on his person—a basketsword hung from his hip, two daggers sheathed at his waist and the black handle of a
sgian dubh
poked out the top of deerskin boots.

He was a good match for Effie’s younger half sister, as well as Clan Mackay. Their union would make their clans a fearsome beast to behold. Clan Sutherland was known for their prowess in battle. They were powerful enough to protect themselves as well as Effie’s clan. The truth of the matter was, Clan Mackay needed Clan Sutherland more than Clan Sutherland needed the Mackays. And her brother knew it, which is one of the reasons Ian had traded their sister for an alliance after Da died.

The other reason was simple—Ian was as eager as Effie to see Vanna wed. Effie had taken over Vanna’s tutelage after Da ousted Vanna’s mam from the clan four years past. At nineteen, Vanna knew her letters and could manage a household, but Effie feared her sister might be a wee bit loose with her legs. Given Laird Sutherland’s lascivious reputation, Effie suspected he might find such a quality agreeable, so long as the girl took care not to spread her legs for his kinsmen.

’Twas a mistake Vanna’s mam had made.

Effie shook the thought out of her mind. Vanna was not to blame for Besse’s transgressions.

“Think ye the chieftain will like me?” Vanna swished long black hair over her shoulder and fiddled with the brooch pinning the heavy wool of her
arisaid
.

“The man agreed to the union in writing six months past. It matters naught if he likes ye.” The worry stitching Vanna’s thin black brows together made Effie wince. She would do well to remember Vanna was the daughter Da had coddled throughout her adolescence, unlike Effie who’d had two bairns in the nursery by nineteen. “I suspect ye will have Laird Sutherland feeding ye roasted almonds before dawn.” Effie gave her sister’s cold fingers a reassuring squeeze then stepped into her brother’s shadow where she belonged.

“Laird Mackay, welcome to Dunrobin.” The chieftains embraced in a fierce hug, smacking one another heartily on the back. “Ye must forgive my tardiness, but in my defense, ye are more than two months early. I didn’t expect ye and your retinue until the first thaw.” Laird Sutherland glanced down a line of Mackay warriors, all huddled in furs with melted snow beading their beards. He made a gesture toward one of his housecarls. Moments later, the fire burning in the hearth roared to life.

A wee bit o’ snow?
Effie contained a snort. They’d traveled four days through a bleating blizzard, risking their horses’ health, as well as their own, because of Vanna’s impatience. Effie feared her toes would never thaw inside her worn leather brogues.

While the chieftains introduced their kinsmen, Effie peeked around her brother’s shoulder to study Laird Sutherland more closely. The man was as braw as they came. Black stubble shadowed his jaw but didn’t hide the strong angles of his chin and cheekbones. Silver-blue eyes the color of shallow seawater glittered beneath thick black brows. His nose, slender and straight, directed her gaze to sharply-defined lips.

Dark Company by Natale Ghent
Christmas with Danny Fit by Amy Lane
Commitment - Predatory Ethics: Book II by Athanasios
What You Left Behind by Jessica Verdi
The Sweetgum Ladies Knit for Love by Beth Pattillo
Quince Clash by Malín Alegría
When the Women Come out to Dance (2002) by Leonard, Elmore
Bones of a Witch by Dana Donovan
Red Denver: A Prelude to REHO (The Hegemon Wars) by D. L. Denham
The Greater Trumps by Charles Williams