Read Tangled Up in Love Online

Tangled Up in Love 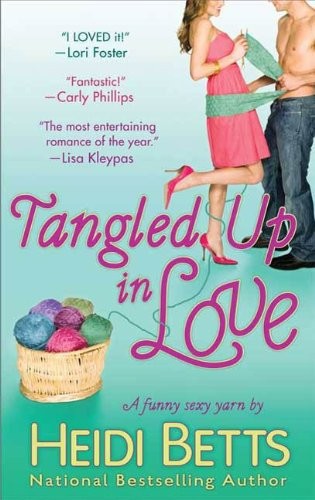 Praise for Heidi Betts and

Tangled Up in Love

“Sexy, fun, and impossible to resist. I LOVED it!”

“A playful and unique premise, winning characters and fast-and-furious dialogue all combine to make
Tangled Up in Love
the most entertaining romance read of the year. Heidi Betts has a winning ability to mix comedy and sensuality with a lively flair that puts her in the top tier of contemporary romance writers.”

“Fresh, hot, and irresistible. Get
Tangled Up in Love
—you’ll love every page!”

Tangled up
in
Love

TANGLED UP IN LOVE

Excerpt from
Loves Me, Loves Me Knot
copyright © 2009 by Heidi Betts.

Big steps and new endeavors are rarely accomplished alone. This one was no different, and I owe several people a rather large debt of gratitude:

My agent, Richard Curtis, who “had a feeling.” God bless your gut, Richard. You’ve never steered me wrong, and this feeling turned out to be an exceptionally good one.

My delightful new editor at St. Martin’s Press, Rose Hilliard, who loved this idea from the very beginning, has never faltered in her boundless enthusiasm, and has been an absolute dream to work with every step of the way.

My mom, Anne Betts, who taught me how to knit in the first place, and answered all those nagging little questions I had for this story and the others in the series.

My good friend and Pink Panty Plotting Partner (try saying that five times fast!), Karen Alarie, who acted as both my rock and sounding board as this entire trilogy was coming together. The next round’s on me, babe!

My brother, Toby, who helped me with the research about Cleveland and didn’t even complain when I e-mailed him a dozen times with last-minute questions
that needed to be answered
right now
. Any mistakes are entirely my own—though I’d be happy to shift the blame, if he’d let me. *g*

And Elizabeth Berger for aiding me these past few years in more ways than I can count. (You know what I’m talking about, Elizabeth. *g*)

Thank you all so much for your help and support! I couldn’t have done it without a single one of you.

Tangled up
in
Love

He wished she didn’t have such a terrific ass.

If it were fat or saggy or flat as a board, or maybe one of those that jiggled when she walked, he would have no trouble ignoring her.

But it wasn’t. Instead, it was world-class. A tight, round, delicious ass that looked good in pants and skirts and everything in between. And it definitely did not jiggle when she walked.

Oh, no, it sashayed. Swayed slowly from side to side like a hypnotist’s watch, drawing appreciative, wolfish stares and sending every dick in the room pointing Due North.

Dylan Stone dragged his gaze away and took a long pull from his bottle of ice-cold Coors Light. Noise clattered around him from the football game playing on The Penalty Box’s multiple television sets and the raised voices of its late-night customers. He was in his element, and this was his crowd.

All except for Miss Veronica Chasen, the bane of his existence and a huge, throbbing thorn in his side.

Of course, in addition to a butt that just wouldn’t quit, she also amused him all to hell. She had a competitive
streak a mile wide, and ever since he’d beaten her out of a prime columnist position at the
Cleveland Herald,
she’d kept him on his toes with the challenges she wrote in her columns every other month just for him.

It had started as a personal bitch session from her, which she’d taken public in one of her weekly columns for the
Cleveland Sentinel,
a smaller rival paper to the
Herald
. But since he’d known perfectly well she was talking about him and how he’d ruined her life by sweeping in with more in his pants than she possessed, he’d had no qualms about firing off a retort in
his
column the following week.

As best he could recall, he’d made a remark about men just being naturally more qualified for some jobs than women, and that if she couldn’t hack it, maybe she should think about doing something more her speed—like needlepoint or working behind the makeup counter of a department store.

Not so surprisingly, she hadn’t taken his suggestion well at all. The very next week, seething with barely suppressed rage, she’d basically announced that just because he filled out his jeans more in the front than she did didn’t mean he knew how to use what God had given him, and she’d be willing to bet money she had bigger balls, anyway. She hadn’t used those exact words, but he’d gotten the drift.

He took another sip of his beer, his mouth turning up at the memory. From there, it had been off to the races.

His response had been something along the lines of,
Oh, yeah? Let’s see you go bungee jumping, then we’ll talk about who’s got the bigger set of balls.

He hadn’t actually expected her to do it, but just a couple of weeks later, there it was—a grainy black-and-white
photograph of her hanging upside down beneath a bridge, connected only by a glorified rubber band around one ankle. Her eyes had been screwed so tightly closed, he was surprised she’d ever been able to open them again. And it had looked like she was screaming loudly enough to bust the eardrums of half the residents of the continental United States.

But she’d gone through with it, he had to give her credit for that.

And at the end of her column about her first experience at bungee jumping, she’d gotten him back by suggesting he prove his masculinity by going skydiving.

Boy, if she’d known how much he hated heights, she would have been cackling with glee. But he couldn’t let her—or their readers—think he was a wuss, so he’d cowboyed up and jumped out of the freaking airplane. He’d just about pissed his pants doing it, too, but imagining her response to his challenge photo the following week had made it well worth walking around with undescended testicles for the next few days.

From that point on, they regularly sent each other off to do the wild, wacky, or dangerous.

He made her play goalie for a charity ice hockey event without telling anyone she was a girl.

She made him get his legs waxed.

He made her run a marathon.

She sent him mountain climbing.

He sent her white-water rafting.

In the latest round, she’d sent him into one of the meanest, nastiest biker bars on the outskirts of Cleveland wearing a hot pink Hawaiian shirt and gold lamé biker shorts to order some flaming pussy drink called a Pink Panty. He’d left with a black eye and bruised ribs, but had
counted himself lucky not to have been made the girlfriend of one of the towering, unshaven, leather-clad, and personal-hygiene-deficient Hell’s Angels, forced to ride around on the bitch seat of his bike the rest of the night.

To repay the favor, Dylan had dared Ronnie to get a tattoo. He was nonspecific as to where or what it should be, but thanks to him, she now sported a Chinese symbol somewhere on her anatomy.

Which brought his train of thought right back around to Ronnie’s perfectly rounded ass, since that’s where he suspected the tattoo was located.

He couldn’t be sure, of course. A photograph of the actual symbol had accompanied her article that week, but it was a close-up and gave no hint as to what part of her body it was on. Since it was nowhere visible to the naked eye, however—and he should know; he’d spent enough time lately doggedly looking for it—and she’d made a reference in her column to it being in what she considered “a rather personal, private area,” he chose to believe she’d gotten the tattoo on her ass.

His brand on her butt. He kind of liked that.

A round of female laughter from a table in the corner drew his attention, and he turned his head slightly to study the group of women seated there. His own friends were caught up in the Steelers–Patriots game playing on the giant television mounted above one corner of the bar, paying little attention to him or anything else going on around them.

Ronnie sat with her back to him, the long fall of her wavy chestnut hair reaching nearly to her hips.

He liked long hair on a woman. Too bad this particular woman happened to be his sworn enemy.

She was bitter as a pill around him, but not for the
first time, he wondered if there was a softer side to Ronnie Chasen. A woman that beautiful shouldn’t be a flaming bitch, and she seemed to get along well enough with her own friends.

The women laughed again, and Dylan had a sneaking suspicion they were having a jolly good time disparaging the shortcomings of men. Isn’t that what women spent their time doing whenever two or more of them got together over a pitcher of margaritas?

He didn’t know them all, but he was familiar with a few because they were intimately involved with his friends.

Ronnie, of course, his archnemesis.

Then there was Grace Fisher, Cleveland’s home-town cross between Oprah Winfrey and Martha Stewart. She had her own cable talk show that covered everything from gripping emotional family dramas to making a cake in the shape of a porcupine. She’d even been nicknamed “Amazing Grace” because of her versatility and lack of any apparent faults whatsoever.

Grace was currently engaged to Dylan’s friend, Zack, who played goalie for Cleveland’s professional hockey team, the Rockets. The two had met at a charity hockey event where Zack first hit a puck over the protective Plexiglas shield straight into Grace’s skull. Then after she’d been bandaged and examined by the team’s physician, Zack had proceeded to fly off the ice and knock her flat on her rear.