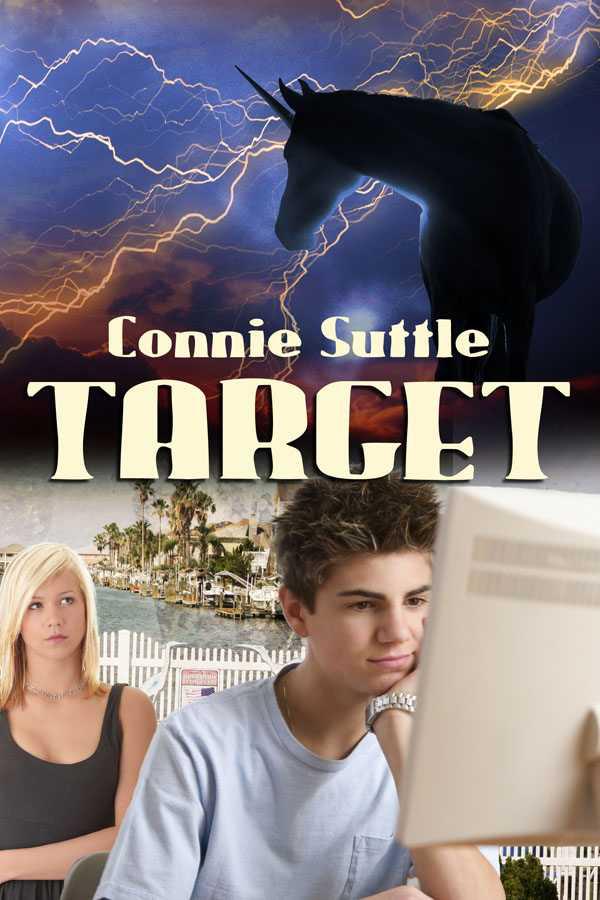 For Walter and Joe, for the usual reasons.

And for Sarah S.

This e-book is a work of fiction. Names, characters and incidents portrayed within its digital pages are entirely fictitious and a product of the author's often warped imagination. Any resemblance to actual persons, living or dead, is purely coincidental. This book, whole or in part, MAY NOT be copied or reproduced by electronic or mechanical means (including photocopying or the implementation of any type of storage or retrieval system) without the express written permission of the author, except where permitted by law.

A note about the locations in this book:

Cloud Chief, Oklahoma is a real ghost town, located near Cordell, Oklahoma. All of the land is now privately owned and the Cloud Chief community portrayed in this book is fictitious in nature.

Other books by Connie Suttle

(Legend of the Ir'Indicti series)

Josh Barnett was completely lost. He'd traveled from Philadelphia two days earlier to visit cousins in Weatherford, Oklahoma. "Tipping a cow," his cousin Chance said, "will make you an official cowboy." Josh, at fifteen, wanted to earn the Stetson hat cousin Chance offered as an incentive. "Just tip the cow; get a picture with your cell and the hat's yours. We'll go to
Landon's Western Wear on Saturday to get it."

"Besides," cousin Alex offered, "If you go on the full moon, you won't need a flashlight."

Josh needed a flashlight. And a map. No distinguishing landmarks could be seen anywhere. He'd been bungling about for hours and he could have sworn a hawk swooped over his head. Hawks didn't fly at night, did they?
Must have been an owl
, Josh reassured himself, shivering despite the warm Oklahoma night. Now, Josh had come to a fence. "Don't cross any barbed-wire fences," both cousins warned when they let him out of the car just south of Highway 152. Josh dithered for seconds, wondering what to do. The fence was in his way and he wasn't about to climb over the barbed-wire contraption anyway.

Contraption
. A great word to use in Oklahoma. It seemed to go well with dry red soil and tall prairie grass waving in the wind. The picture wouldn't be complete, either, without the occasional armadillo, squashed on heated pavement in the midst of a sweltering Oklahoma summer. "I'll just go back," Josh decided aloud, turning away from the fence. His cousins had likely played a practical joke on him anyway. The slavering beast that leapt at Josh took the young man's life before he could even scream.

"Aedan, they've found Ashe." Adele Evans slipped into the robe her husband held out for her. She'd been flying over Cloud Chief in her peregrine falcon shape while the full moon slipped across the sky. "The monster they sent killed a boy who was out wandering through the Barnett's wheat fields," Adele added, wiping wetness from her cheeks. "I tried to get the boy to turn around and go back, but he wouldn't." Her hands trembled while she scrubbed tears away.

"I'll call Marcus and Nathan," Aedan replied, worry in his words as he pulled his cell phone from a pocket.

Flying through the moonlit night as the bumblebee bat, Ashe sent another piercing call. Silent except to the most sensitive of ears, it echoed back within seconds, telling him exactly where the Pack ran. Salidar DeLuca, a fifteen-year-old werewolf and his best friend, had been running with the Pack for nearly a year. Sali had been so proud last year when three days after his fifteenth birthday, Sali's father allowed him to hunt on the full moon. Sali and Ashe were now nearing their sixteenth birthdays. Ashe was looking forward to driving. Legally, anyway.

When the last of Ashe's echoes bounced back to him, however, he detected something. Something the wrong size and shape. Changing swiftly from bumblebee bat to mist, he blazed across the fields and farmland that made up Cloud Chief, an official ghost town in western Oklahoma. The shape he'd detected was moving swiftly on the eastern edge of Cloud Chief, just beyond the spelled fence that kept the paranormal community hidden from humans.

What the?
Ashe's thoughts scattered when he saw a mangled body, and then the creature that ran away from it. Terrified, Ashe sent desperate mindspeech to his father.
Dad! I'm bringing something to you. Get Nathan! Please wait in front of the house—I'll drop it there. It killed somebody!

The creature raced across the prairie below, covering ground quickly. It was no match for the speed Ashe held as mist—Ashe had grown in many ways since he'd learned of his gifts, and he'd honed his misting speed to a fine art. Swooping down, Ashe turned the monster to mist when he came in contact with it. Ashe felt the fury radiating off the monster as he gathered it inside his mist. What shocked him most, however, were the words that came with the fury. As yet, Ashe had only met three who could return his mindspeech. None of those three were nearby. This one, though, could return mindspeech easily, if it were interested in a two-way conversation and if it weren't so intent on killing Ashe.

I'll Kill you!
It shouted mentally.
Rip your heart out!
It raged. Ashe rushed toward his home, frantically hoping his vampire father would be waiting.

"I hear Ashe," Nathan nodded. Ashe had just sent mindspeech to his father and Nathan, who waited for Ashe to drop the prisoner. Both vampires had learned long ago not to exhibit shock or surprise to an enemy. When the large creature, longhaired, six-horned and growling, hit the ground before them, Aedan and Nathan went to work.

"I've never seen anything like this." Marcus DeLuca walked around the creature. Dawn was only an hour away and Aedan had ordered his son inside the house. Ashe had witnessed the killing of the creature and Aedan only waited long enough to hear where the body of the human victim lay before sending Ashe inside with his mother.

"It looks like a prehistoric animal of some sort. Except for the horns," Nathan observed, lifting eight-inch strands of the monster's hair in curiosity.

"They know where we are," Marcus sighed. "I'll call the Grand Master in a few minutes and see where he wants to relocate the community."

"This is the third killing we've seen like this in two years, Director." The Joint NSA and Homeland Security Office had received a tip from an anonymous source, reporting a savaged body found in an Oklahoma field. This murder joined two others, the first in Tennessee and a second in Iowa. The wounds were very similar in each case and the tracks leading to and away from the body were the same.

Large, cloven hooves were combined with clawed, bear-like paws, as if the hind legs belonged to a bull and the front to a grizzly. Only this time, the prints leading away ended abruptly, for some unknown reason. Before, dogs had sniffed the scents until they'd disappeared eventually. Not so this time, and Director Matthew Michaels of the Joint NSA and Homeland Security Department didn't want to show his uncertainty to subordinates.

"Gather the evidence and remove the body," he snapped angrily. His employees rushed to obey. Matt stood in a wide field next to a fence while daylight waned about him, with tall prairie grass blowing around his feet in what seemed an endless wind. The grass surrounding him was already drying in the oppressive heat, though it was barely June.

"Matt, I have information," one of the special agents ended a call on his cell and stepped carefully through the slender, waving grasses.

"I'm almost afraid to hear it," Matt replied. Jasper Hadley, one of a handful of werewolf agents Matt employed, probably didn't have good news. The special paranormal division of the FBI had been working undercover for nearly forty years. A courageous former Director had gotten the permission of a President to start the whole operation. Now, sixteen werewolves and ten vampires worked in that division, with the full knowledge and consent of the Grand Master and the Head of the Vampire Council. Only the Director, the President and a few others were aware the division existed at all.

"The killer is dead and not far from here," Jasper said quietly. "You're invited to take a look and we can haul it to forensics afterward, but it won't be anything we've dealt with before. This race," Jasper, rubbed the back of his neck in an agitated manner, "they don't care who or what they kill. Get in their way and you'll likely end up dead. Unless you’re a vampire or a small pack of wolves."

"Just what I wanted to hear," Matt grumbled, raking a hand through light brown hair, his hazel eyes surveying the crime scene. "Know where we're going?" he asked, noticing the sun was about to set. One usually didn't notice such things unless one was used to working with vampires. The Director was always aware of sunset times and full moons.

"Yeah. I'll drive." Jasper led the way to a Chevy Trailblazer he'd rented at the Oklahoma City airport. Red-haired and blue-eyed, Jasper was unusual among werewolves, with a light sprinkling of freckles across his nose. Other werewolves always recognized his scent, though.

"Where are we going?" Matt asked as Jasper pulled through a gap in the fence, the vehicle bouncing uncomfortably as they crossed a shallow ditch. The Barnett family had allowed Matt's team to cut the barbed wire fence in order to provide easier access to the crime scene. Two of the dead teen's cousins had shamefully admitted to playing the practical joke, by sending their city relative out on a full moon to tip cows. A common myth, as it turned out. Cows were not easily tipped, didn't sleep while standing (although they did doze now and then), and if you managed to get one to stand still long enough, would still require several strong friends to help you push it over.

"We're going down the road just a little way—to Cloud Chief; it isn't easy to see the community entrance from the road," Jasper replied to Matt's question.

"I would never have noticed this," Matt turned in his seat. It looked to be solid brush and fencing when Jasper had driven right through it. Matt heard gravel crunching beneath the vehicle, but that hadn't been visible from the country road running alongside it.

"Meant to be that way," Jasper informed the Director, driving slowly over a rough path consisting of gravel lying across ruts, with weeds and grass growing in the center of the narrow trail.

"This is the back of beyond, isn't it?" Matt, a native of Los Angeles, observed dryly.

"I wouldn't mention that to the residents," Jasper said. "This is protection for them."

"I realize that," Matt nodded absently, looking around. He saw two houses as they drove along and would likely see more, but they didn't appear until the truck was nearly past them.