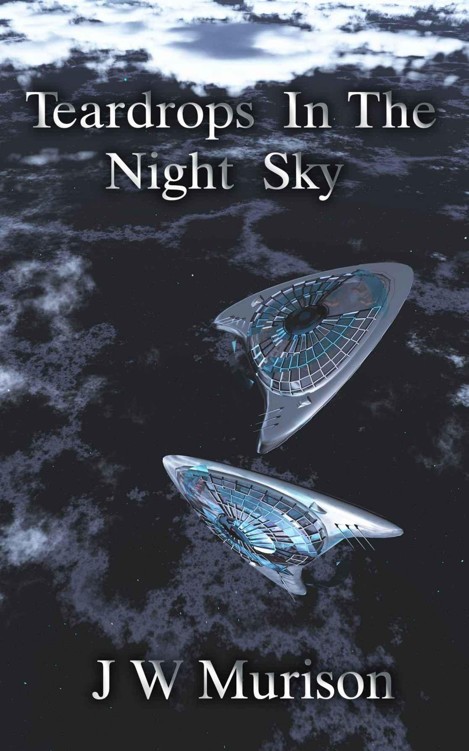 Teardrops In The Night Sky

Join me on Facebook on my J W Murison page

This was my first pure Sci-Fi novel and dedicated to a good friend of mine Stephen Gordon whom the main character is set around, a man with more courage in his little finger than most gain in a lifetime.  Stephen was in a near fatal accident when he was a teenager.
After the horrific accident Stephen was left in a near vegetative state in which he was supposed to remain for the rest of his life.  No one took into consideration Stephens courage and determination.  Today you can see him up the high street in Forres, always with a smile on his face and the time to stop and have a chat.  This book is dedicated to him and people like him who have faced severe adversity and conquered it.

Other Books by J W Murison

I would like to thank one very special lady who made the publishing of this novel at this time possible.  That lady is Jeannie
Michaud, who once more stepped up to the plate to design a brand new book cover for this title. I absolutely adore it, thank you very, very much.

Teardrops In The Night Sky

‘How could you call this pain?  Our hearts have been ripped from our living bodies.  We are no more now than empty shells.’

‘We still have our souls, and must go on.’

‘I fear I cannot.  For without my heart I have no wish or desire to move.’

‘We can find new hearts.’

‘Is it so easy for you males?  Do you have no feelings or compassion?  Could you rip a living heart from your body and replace it with a new one if you thought it better.’

She was angry and hurt, lashing out with her thoughts.  He knew she really didn’t mean it but still her words wounded him deeply.

‘We have been mated now for generations.  How can you think so little of me?’

She felt his pain and knew shame for the first time in many centuries.  ‘I am sorry; I did not mean those words.’

He relaxed a little, ‘I know, and I am sorry for believing you could think so of me, but we cannot stay here.  To do so would be to die and I cannot let that happen to you.’

She felt an up welling of emotion for her mate, ‘but what can we do, where will we go?  We cannot return to our home without our hearts.  There are too many dangers and we are defenceless without them.’

For a long time he was silent as he searched the heavenly bodies that surrounded them.  Then he felt something.  She became aware as his level of consciousness intensified and tried to join him in his search.

Eventually he felt it again, ‘did you hear that?’

He tuned in as much as his systems would allow without his heart.  Eventually it came again, ‘some form of radio wave, I think.’

‘Are you sure it isn’t background radiation?’

‘I don’t think so, the frequency is too low.’

‘Then it must be very primitive.’

‘Yes, but we don’t know how long or how far it has travelled.  Anyway it is hope.’

‘We must be cautious,’ she advised.’

They left what they knew as the Great Barrier, and followed the primitive signals until they came in sight of a Blue Planet.  As they snuck around the dark side of the Moon, she gasped.  ‘Have you ever seen a planet so beautiful?’

He found he had to agree, ‘rarely.’  His sensors swept out across space and he felt a moments panic.  ‘They have viewing devices in orbit, we must disguise ourselves.’

She agreed and their sleek bodies shimmered for a moment.  In an instant they became indiscernible from the grey Moon rock behind them.

Now in clear line of sight of the Blue Planet they were bombarded by millions of different signals.  She winched from the overload of data.  ‘What do we do now?’

‘We watch, wait and learn.’

So as the Moon revolved around the Earth, and the Earth around the sun, they watched and learned.  It would be many Earth years before they came to a decision about what to do.  But without a heart to tell them so, time meant very little to the two sleek and beautiful craft.

S
teven Gordon sat back from the computer screen at the sound of the motorcycle horn outside and rubbed his eyes.  He knew who it was before he got up and looked out the window.

He gave the nineteen-year-old Buzz a wave and plonked himself back down in front of the console.  He cursed Buzz silently.  Another couple of hours and he would have been finished.  At the age of fifteen Steven was a genius of the type only found once in every century.

He had already completed every possible course in connection with time and space, mathematics and physics that the resources of the United States and the Kennedy Space centre could throw at him.

Ne
ither did he show any symptoms nor signs of the neurotic tendency’s that other geniuses over the century’s had suffered, much to his parent’s relief.  Both were imported scientists and worked for the NASA Space agency and very proud of their son’s achievements.

Indeed by the age of ten he could talk to them on equal terms about their work.  By the age of twelve he was teaching them, and now at the age of fifteen, he was in line for a number of Nobel prizes for his achievements in science so far.

What he was worried about was the fact that all his friends were much older than him and much taller than his father’s towering five foot six.  A curse from their Scots ancestry.  Even fully grown he was worried he would still be small.

He quickly saved his document, threw on a clean t-shirt and ran down the stairs.  His mother caught him at the bottom.

‘If that’s that Buzz with his new motor bike don’t you dare get on it.’

This day her light Scottish brogue irritated him, ‘yeah ok.’

He ducked past and out to where Buzz waited patiently.

‘Hey, where you been shrimp?’

‘Where do you think dope?’  Laughing Steven easily ducked the helmet swung at him.

The friends laughed easily at their byplay.  Buzz was a good six-foot two and built, but he would still think twice about taking on the smaller Steven.

Recognising Steven would probably have a lot of problems later in life; his father had sent him to martial arts classes at the tender age of seven.  By the time Buzz met him when he was almost eleven Steven was already a black belt and his small frame rippled with hard worked muscle.

By Steven’s standards Buzz was a simple buffoon.  His father worked with the civilian security people and there was little doubt Buzz would follow in his footsteps.  He was an academic underachiever with the rare talent of not actually caring what his grades were.  He could have done a lot better for himself and knew it.

His easy manner and quick wit had drawn Steven like a magnet.  Buzz’s problems were simple and earthly.  A rare delight for a mind that struggled with the mathematics of quantum mechanics on a daily basis.

Buzz’s attraction for Steven came in the simple form of admiration.  A few days after he first saw Steven, he watched as the eleven year old took out two of the schools worst bullies in a furry of fist and feet.  He admired the little guy’s guts and determination, and far from being put off by the power of the young child’s intellect he respected it.

Once Steven got over being offered a hand in friendship from the young man who looked like a giant to him, they quickly became in
separable.  Buzz’s parents had also quickly taken to the gifted child, and through them he found diversity in life that he had been lacking.

Country born and bred the two were rarely idle, but in a manner that spoke of a contentment with life.  There was always an engine to be tinkered with or a DIY project to be getting on with.  In the kitchen, his mother would delight in making cakes and bread by hand, an Aladdin’s cave of delights to any child.

Any fears his parents might have had were soon belayed once they met the Anderson’s, and although both families came from opposite sides of the social structure, Stevens parents soon discovered the same attraction their son had to the easygoing family and they had become firm friends over the years.

‘Jump on shrimp and I’ll take you for a ride.’

‘What are you doing here?  I thought you were supposed to be taking Julie out this afternoon.’

‘Naw, saw her out with some collage dude last night, so I dumped her by e-mail this morning.  So I got the whole day free.  What you doing?’

‘Got a paper on space-time distortion to finish this afternoon.  Won’t take me long though.’

‘Cool, you'll have to teach me that some time?’

Steven laughed aloud and felt some of the tension ease.  ‘Yeah if I live another couple of hundred years I will.’

Buzz laughed out loud knowing if they both lived another thousand years he still wouldn’t get past the fundamentals.  ‘I’ll hold you to that.’

No sooner had Steven sat on than his mother marched out of the house, ‘Steven, what did I tell you?’

‘I’m only sitting on it,’ he snapped back.

Mary Gordon forced a smile onto her face, ‘hello Buzz how’s your Mum?’

‘She’s fine Mrs. Gordon, sent something over for you.’

Buzz opened the plastic container on the back of the bike and took out a large brown bag.  He strode over to give it to her, his eyes full of adoration.  This petite, raven-haired Scots beauty had been doing strange things to his hormone levels for years.

Mary hid her amusement and looked in the bag, ‘are these made from the recipe my grandmother sent over?’

‘No Buzz, these are honest to God, Scots Bannocks.’

Mary laughed.  It was then the bike burst into life.  A sudden panic hit her.  They began running toward Steven but it was too late.  He gunned the bike out of the drive fish tailing it as he went.

‘Steven,’ they both screamed after him.  Buzz ran down the road after him waving his helmet in the air helplessly.

Steven was caught in a fit of teenage rebellion.  He had begun to resent the way his parents and his peers were pushing him.  Coupled with a desire to push himself and a fresh influx of hormones, he found himself in a strange paradox.

This wasn’t Buzz’s first bike and he had let him ride it on his own many times in secret.  He decided it was time to show his mother that he was man enough to make his own decisions.

Adrenalin surged through his body as he opened up the throttle.  At the end of his street he suddenly realised he was going too fast and braked hard.  The back wheel began to slide away from him.  He never even saw the eighteen-wheeler cross the intersection until it was too late.

His face was smacked of the body of the wagon as the bike shot underneath.  For a hairs breath he lay in front of the back tires, but then the front wheel was caught by the drive shaft and whipped around it.  Steven was caught by the bike and followed.

Mangled he was dumped unceremoniously in the middle of the road amongst pieces of the bike; a dark pool of bruised blood began to spread slowly around him.