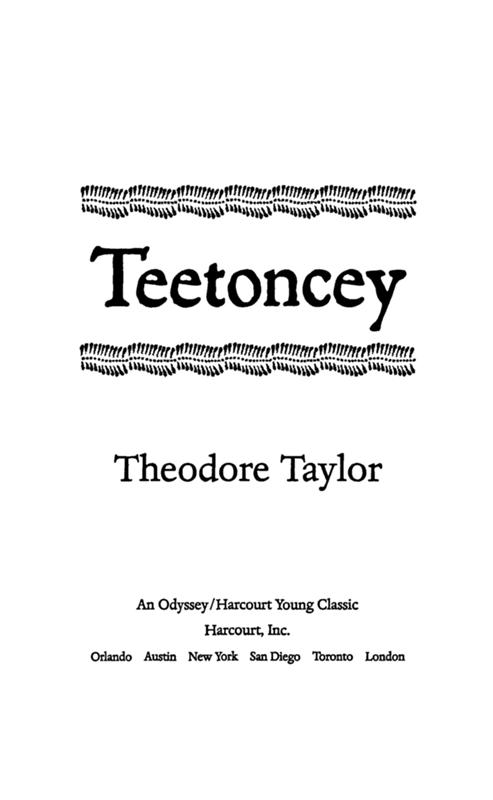 All rights reserved. No part of this publication may be reproduced or
transmitted in any form or by any means, electronic or mechanical, including
photocopy, recording, or any information storage and retrieval system,
without permission in writing from the publisher.

Requests for permission to make copies of any part of the work
should be mailed to the following address: Permissions Department,
Harcourt, Inc., 6277 Sea Harbor Drive, Orlando, Florida 32887-6777.

For Alma Ruth "Duck" Macrorie
who is now telling St. Peter how to decorate
heaven. With many colors; much laughter. 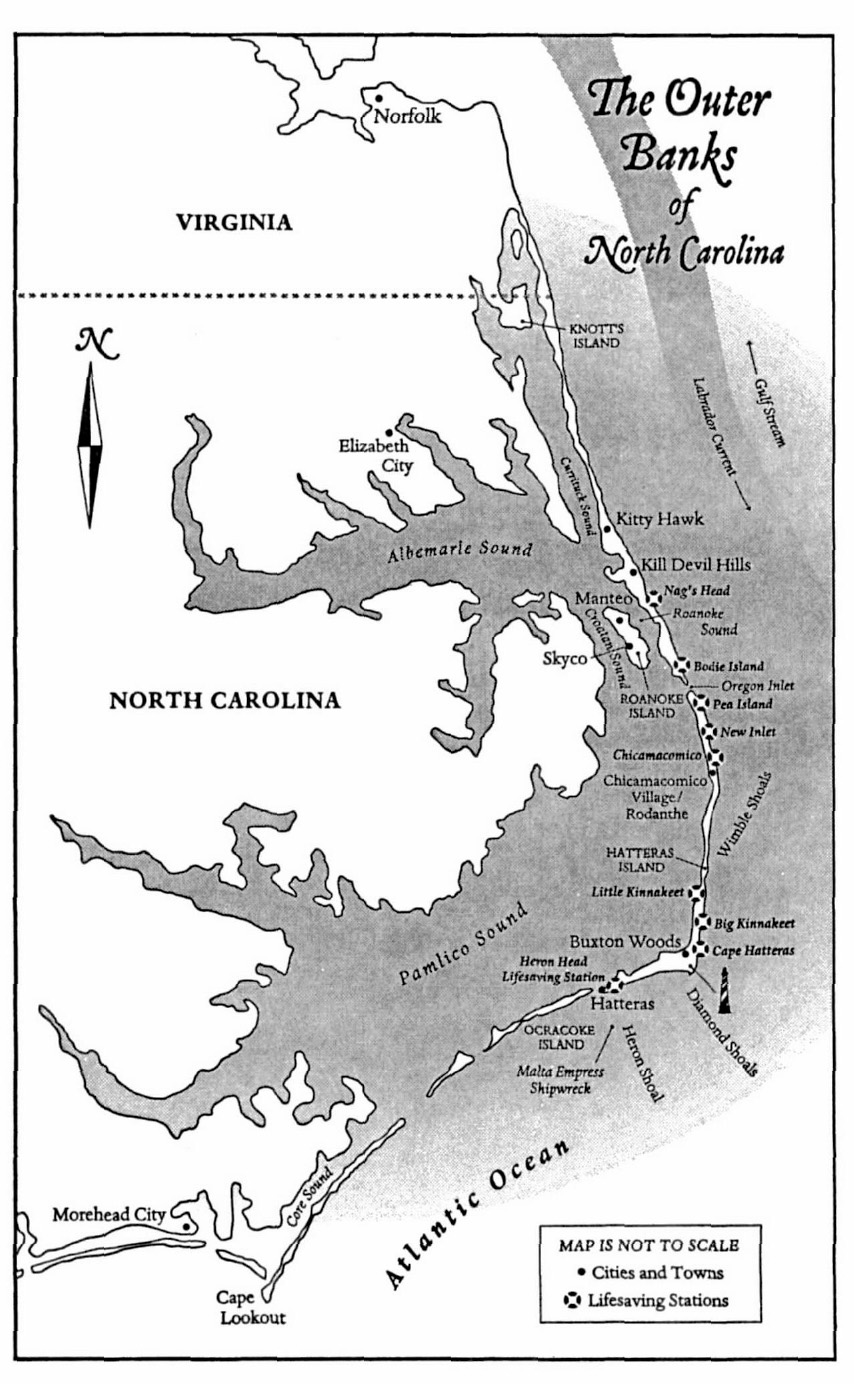 I
N THE LOOKOUT CUPOLA
of the red-roofed Heron Head Lifesaving Station, on the Outer Banks of North Carolina, young Mark Jennette, surfman, peered seaward through streams of water on the pane. It was like sighting through a glaze of ice. He could barely see the beach; the raging breakers. Gusting wind shook the building. His watch had begun at noon, and he was relieved that it was nearing an end. No one was out on foot or sand pony patrol because of poor visibility. Only Jennette was watching the sea and it was a useless effort.

Below him, at various places in the two-story shingled building, were the five other Heron Head surfmen, along with the commanding officer, Keeper Filene Midgett. They went about work saying little but fully realizing that before this day and night were over, they might have to crew the six-oared boat and go out through the crashing surf. There was not a man among them who was not deathly afraid of the sea. They knew its might. Yet there was not one, and there never had been, who would refuse to take his seat in the oak-ribbed craft.

On the first floor of the building was the boatroom, the combined mess and crew off-duty room; the keeper's room and a storeroom. That room contained the breeches buoys, signals, and rockets; a life car, tools, and other apparatus to save lives. The doors to the boatroom were wide and heavy, opening to a sloping platform so that the boats could be quickly pulled out onto the beach. There was another door on the opposite side in case the boats would have to travel overland.

The second floor contained cots for the men and a space for survivors who were hauled, often more dead than alive, from the ocean. This space had been filled on more than one occasion.

A few minutes before four o'clock, Jabez Tillett, an older man, wound up into the lookout cupola to take the watch. "See anythin', Mark?" he asked, squinting futilely out the window.

They exchanged uncertain, worried looks and then Jennette went down the ladder to the mess for a mug of coffee.

Outside, the high flagstaff, used to signal passing ships with international flags, bent from the force of the wind; rain slanted over the low dunes to flatten the few clumps of long grass on inland where a handful of trees dodged frantically, clinging to roots.

During the worst storms the tide sometimes flooded in over the Banks, the chain of narrow, almost barren islands between Currituck Sound, Roanoke Sound, Pamlico Sound, Core Sound, and the ocean. The shallow sounds were to east, freshwater tainted with salt, making it brackish; home to fish, crab, oysters, clams, and scallops. They were dotted with pound poles for fishing nets. It was mullet and shad country.

The islands stretched like a thin, drawn hunters bow for a hundred seventy-five miles from up around Knott's Island, near the Virginia border, down to Cape Lookout, cutting sharp west at Hatteras Lighthouse and the vicious Diamond sandbars. Over the years surging seas cut new inlets, and new islands would be born. Then the sea and sand would fill in, closing the inlets.

The few people who lived on the narrow fingers of shifting barrier sand, lapping water on both sides of them, were called Bankers.

At 4:40 the
Malta Empress
grounded with a muffled boom, piling up on a sandbar a quarter mile offshore, breaking her back; snapping two of her masts as if they were twigs. The roar of the shoal water deadened the agony of splintered wood and the pops of severed rigging as she began to come apart.

In the dining saloon, the oil lamps squirted from their gimbals to splatter against the forward bulkhead, one of them sending flames up the wet wood.

The woman and the girl picked themselves up off the deck as the man rushed into the shadows. His face was as gray as the seas outside. Trying to get his breath, believing they were about to die, he attempted to remain calm. "We've hit the beach. We must go."

His wife nodded, and he clung to them for a moment to murmur, "I love you both." Then he lifted the girl up, folding her into his arms. "Hold tight to me. Keep your eyes closed," he said. He had already seen what was out there.

The girl nodded and pressed her white lips together, clinging to him desperately.

They went up the shaking companion and out onto the deck as water rose in the dining saloon. Seas were beginning to bore across the shattered hull, carrying wreckage, sweeping everything in the path.

They looked ahead. On the bow were a few vague forms, huddling together. Beyond that, in the twilight murk, were towering breakers.

The wife held to the husband's arm for a brief moment but then her feet were sliced away by a length of broken railing; her head was smashed against the deck housing. The girl saw it all and screamed. The mother twisted lifelessly forward in foam and debris; her body entangled in the broken railing.

The next icy sea caught the man and the girl, tossing them over the side. Choking, they hit bottom and then were propelled to the raging surface as the ship disintegrated behind them.

He shouted, "Hang on," and began to kick in what he thought was the direction of the beach.

He fought his way almost to the breaker line, but the first heavy curl ripped them apart and the girl, separated from her father, tumbled over and over, slamming into the bottom headfirst, then rising in the water, stunned, to be trapped under another curl. Spun over, she slammed again to the bottom, her head ramming into compacted sand.

She had arrived on the Outer Banks, "The Graveyard of the Atlantic," in this year of 1898.

A
FTER DARK
, about six, the driving rain stopped. Then the wind slackened off a bit, dropping its whine. The gale was going inland at last to rake the autumn cornfield stubble on the mainland and then dwindle out against the far-off Blue Ridge peaks.

The brown-eyed boy in faded overalls and a blue shirt, dark hair atangleâBen O'Nealâstood by the window, looking out through beads of water, seeing nothing, but somehow glad that the storm was over. A gale such as this had taken his father, John, a surfman. A squall in the sound had taken his youngest brother, Guthrie. Of certainty, the O'Neals had already paid their dues to the sea, and it was not likely they would have to pay again.

His oldest brother, Reuben, second mate on the coasting brig
Elnora Langhans,
was somewhere between Carolina and Trinidad, but Ben was sure he was safe. Reuben was a fine sailor.

Rachel, his mother, was at the living-room table, behind him, sewing silently in the orange glow of the lamp, deep in her own thoughts. Boo Dog, a mound of gold Labrador, slept peacefully by her feet, a familiar position.

So, aside from the tick of the ship's dock, a precise Seth Thomas, which had been salvaged off a wreck in 1889, it was very quiet in the small house, silvered by sand and wind, nestled in a hammockâhigh ground in a marshy regionâover by the sound side, south and west of Heron Head Lifesaving Station.

But Ben knew that the surf was still pounding in, ten or twelve feet high, slamming against the Banks as if to destroy them. Probably churning Diamond Shoals into a mantrap; making seamen caught anywhere near Hatteras, just to south, wish they were snug in port, sipping beer.

This wild night, Ben was thinking, there likely wasn't a sane man, woman, or child on the barrier islands who wouldn't have wagered that a ship would crunch in and die. It was a fair bet in any nor'easter.

They were always out there, schooners or brigantines or barks, edging around Hatteras respectfully or skirting Diamond's long sand fingers, full sails bellied nicely in fair weather; main topsail and foresail reefed in foul, everything else furled away. Steamers plodded by, too; wrecked, too. More of them every year.

Ben often watched the constant parade, wishing he was aboard for the Caribbean or headed north to New York or Boston. Anywhere would have been better than these lonely islands. Anywhere.

And while the storms sent his mother into a gloom, he didn't really mind them if they didn't last long. In fact, the fury excited him. But his mother never failed to mention, once the wind began calling, that more than four hundred ships had crashed on these sands. She'd always find a way to bring Upjohn O'Neal and Guthrie, sometimes without even mentioning their names. She'd done it earlier this day and he'd groaned. It wasn't that he didn't respect them. He did. Especially his father. But he'd never really known them. He was only two when John O'Neal was lost down at Hatteras; only four when Guthrie, who was then thirteen and money fishing for Old Man Spencer, had been swept overboard in Pamlico Sound. He knew them by photographs and stories. John O'Neal was a legend on the Banks.

But many times Ben had been told by others that if all the sailors and fishermen who'd been drowned here would suddenly come back, dating from Sir Walter Raleigh's ships on, two thousand ghosts would be walking the sands. Some nights, in bed, he thought about the ghosts. Those men walking along the beach, hair all matted and clothes ripped up, staring straight ahead; mouths open and walking, walking. Once, he dreamed of seeing his father and Guthrie. Yet, in daylight, it made no sense.

Her voice took his mind off the beach.

The stove, an iron hot-box made in Cincinnati, could chase them out when it glowed cherry red, devouring wood almost as fast as Ben could get it, even with the damper at short choke.

He nodded and turned away from the window to sweater-up; get his coat and boots. He was only too happy to leave the room. Aside from dashing to the outhouse twice, he'd had to look at Chicago catalogs and do odd jobs while the frame house, tucked at the end of a short lane in red myrtle, a few live oak, and some scrub holly,
yaupon,
trembled in the gale. The wood was at the rear of their five rooms.

Je Suis a Toi (Monsters in the Dark Book 4) by Pepper Winters
Tears of the Broken by A.M Hudson
Wanted Molotov Cocktail by Marteeka Karland
The Magic Square - Tricking Your Way to Mental Superpowers by Lewis Smile
Death Of A Dream Maker by Katy Munger
Way of the Gun (9781101597804) by West, Charles G.
Terminal Freeze by Lincoln Child
Spree (YA Paranormal) by DeCoteau, Jonathan
Time Bomb by Jonathan Kellerman
The Plum Tree by Ellen Marie Wiseman