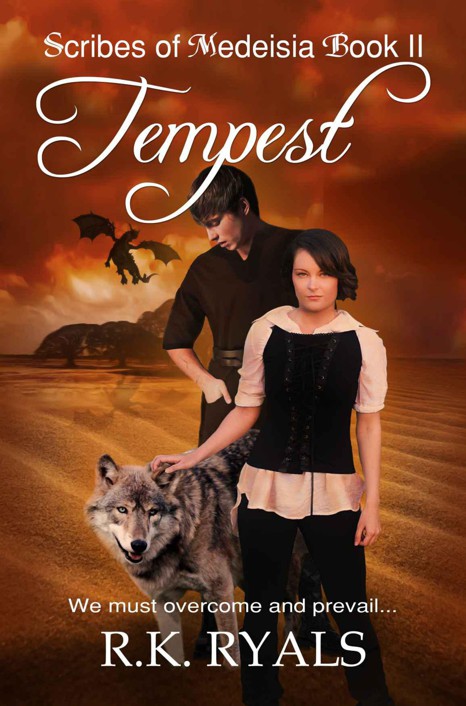 The Scribes of Medeisia Book II

This is a work of fiction. Names, characters, places, and incidents are products of the author's imagination or are used fictitiously and are not to be construed as real. Any resemblance to actual events, locales, organizations, or persons, living or dead, is entirely coincidental.

To my husband who supports me with a ferocity I'm sure I don't deserve.

To my children, who are the very reason I wake up each day with stars in my eyes and a story in my heart.

To my sisters, I love you.

And to my father, who is as stubborn as they come. I'm so glad I take after you.

I have had the privilege of working with the most amazing people on this project. The Scribes of Medeisia has been such an intense and amazing series to write. Thank you to everyone who has been involved. To my editor, Melissa Ringsted, who is such an amazing woman with a beautiful personality. To my wonderfully talented photographer and best friend, Audrey Welch, who gives me just the right kind of encouragement. I love you. To my cover artist, Laura Wright Laroche, who puts up with my picky nature. You are incredible. To Christina Silcox, who is a personal assistant extraordinaire and one heck of a cheerleader. You rock! To Melissa Wright, who is an amazing writer, a great friend, and an awesome beta reader. To Whitney Deboe, who is always there when I need an opinion about something. To the women of YATR, who are amazing on so many levels. And to my awesome readers! You are the reason I keep putting my writing out there. I love you all!

Booted feet marched heavily down an ivory marble hall, the sound echoing along the walls in an eerie cadence that sang of determination. There was no fear in the walk, only purpose and confidence. The marble floor shone so brilliantly that the walking man’s reflection met each step in an odd mirrored manner, as if the floor was made of glass rather than marble. But if the floor was magnificent, it was nothing compared to the man.

Large black boots covered strong calves before blending into a pair of tight, tawny breeches stretched over muscular thighs. The man was tall and large, his frame broad, his height over six foot. A plain, billowing white tunic covered his torso, the rippling muscles in his chest obvious where he left the shirt untied. A large black ink tattoo covered one side of his exposed chest, the design foreign and odd. But it was his face that captured the eye and held it.

His face was like the marble he walked on, all hard planes. He was too rugged to be pretty, too wicked looking to be elegant. According to an upstairs maid, who often tended his room during bathing, he was simply sinfully dangerous, like the massive wild cats that prowled the humid forests of Yorbrook, a country most in Sadeemia had never seen but had often heard of. Mahogany-colored hair streaked with sun-kissed gold brushed the tunic’s collar in a careless manner, as if the man spent more time running his fingers through it than he did brushing it. His brilliant blue eyes were piercing, his gaze both intimidating and deadly, and he knew it. He knew it because he’d spent years shaping himself into the man he was now, a man of irony whose personality often contradicted itself.

Sinfully dangerous. It was a good description, and the floor’s reflection made servants stationed along the wall shiver as he passed; their heads bowed, eyes on the face in the marble.

The man’s stride took him down a wide receiving hall with high vaulted ceilings. Other than the marble floor, there was no decoration. Liveried soldiers and servants lined the unadorned stone walls. The ceiling above had been outfitted with a thick glass window, and sunlight poured down into the room, the glow highlighting a massive golden throne at the end of the hall.

An equally formidable—yet older—man sat upon the velvet-padded throne, his calculating eyes on the man approaching him. His head lifted, and he spoke, his words booming.

“How severe you look, son,” he said

The man on the throne had the bearing of a king, and rightly so, for King Freemont Horan Bernhart VIII had ruled the country of Sadeemia now for over fifty years. The only outward sign of his increasing age was the white that now streaked his light brown hair and beard.

The younger man paused a few feet away from the throne’s dais before going down on one knee on the marble.

He had a low, smooth voice that commanded attention.

The king lifted one jeweled hand, waving it dismissively. “We won’t stand upon ceremony today. Rise, Cadeyrn. Deliver your news.”

Prince Cadeyrn Forsen Bernhart, the second son of Freemont, stood. His movements were as fluid as his voice, and he raised his head, his piercing eyes meeting the king’s evenly.

“There is something brewing in Medeisia, Father. I want to send a spy into the country.”

The king stared over his son’s head, momentary silence reigning before he stood slowly, his eyes hard.

“Out!” he bellowed, his hand gesturing at the silent servants and guards stationed along the hall.

Cadeyrn never flinched. Within moments, the hall was empty.

Freemont’s gaze returned to Cadeyrn. “You are a foolish man, son.”

Cadeyrn’s eyes glinted. “Am I? Says the king who has been turning a blind eye to his Western border for years.”

Freemont stepped down from his throne, moving off the dais so that he stood on even ground before his son. The movement only emphasized Freemont’s aggravation, for at twenty-five turns, Cadeyrn had bypassed his father in height by several inches. It irritated the king to look up at anyone, particularly his son.

“Says the man who has been telling me for years that Medeisia wishes our country ill will. Where are the soldiers, Cadeyrn? Where are the invading armies?” Freemont shot back.

The prince stared down at his father.

“I have been leading your army into war for eight years.
Eight years
! Eight years I have been sailing the seas, strengthening your foreign relations, commanding your armies in skirmishes history will never tell about, watching good men die under my command so that Sadeemia could prosper and Arien could remain home with his bride to produce your heir. Eight years. I know war, Father. I have built your kingdom with the blood of your men, with
my
blood.”

“And this makes you an expert on my Western border?” the king asked. “No one would attempt to cross the Ardus, and Raemon doesn’t have the man power to come at us from the sea.”

“We have nothing to base those presumptions on. There is only silence from Medeisia. Raemon has cut himself off from most trade. There hasn’t been a foreign emissary inside his borders in years. We have no idea how strong, or weak, he is.”

Freemont was silent, his eyes searching his son’s gaze before he moved once more onto the dais, perching carelessly on the edge of his throne.

“Something has happened to bring you to this sudden conclusion,” Freemont remarked. He knew his son better than Cadeyrn liked to admit. If Cadeyrn was approaching the king now, then he had good cause.

Cadeyrn took a step toward the throne.

“I had only one contact in Medeisia. Garod Consta-Mayria. He was the only man in Medeisia permitted any dealings with me or my men, and even he is not from Sadeemia. Do you not think it odd that Raemon allows no foreign representatives within his country?”

Freemont’s eyes narrowed. “Get to the point, son.”

Another step forward, and Cadeyrn’s boots rested against the dais’ bottom step.

“I’ve received word that Consta-Mayria is no longer the envoy for Sadeemia. His position has been dissolved and no one has replaced him.”

Freemont’s hand came up to the throne’s armrest, his fist tightening around the gilded frame. He knew as well as Cadeyrn what dissolving an ambassadorship meant.

Cadeyrn took a step up onto the dais.

“Raemon is shutting down relations between our countries. I was raised on our histories, Father. If you wouldn’t believe me before, then believe me now. Something is happening in Medeisia, and Sadeemia is the closest country to its borders. You wear the other half of the dragon pendant. I don’t trust Raemon.”

Freemont closed his eyes and sighed, his brows creasing. The king suffered from massive headaches. They had gotten worse as he’d aged, and he felt the sharp twinges of pain in his temple that signaled an oncoming spell.

“Do not let your past color your assumptions,” Freemont said carefully. “It could be Raemon has closed down relations with all countries, not just our own.”

Cadeyrn was silent. The king didn’t have to open his eyes to see the pain hidden in his son’s gaze. It was always there, just beneath the surface. Cadeyrn had suffered much in his young life.

Born with a magic so strong even the mages who attended his birth were afraid of him, the prince had been plagued with hardship. He was viewed with awe by his countrymen, but viewed with fear by his enemies. Cadeyrn was only five turns when the first attempt on his life was made by a foreign assassin from Freesia. It had nearly killed him. Since then, Freemont had taken every possible precaution to ensure his son’s safety. Cadeyrn was trained from childhood to fight with all weapons available to the king. It helped that Cadeyrn’s magic somehow seemed connected to steel. No one had ever bested the prince with a sword. But even that had not eliminated tragedy.
So
much tragedy.

Arien was a thin, awkward man married to a princess from Yorbrook. The birth of their first child, a son, had cemented the relationship between Sadeemia and Yorbrook, ensuring the Bernharts had a direct male heir to the throne.

Cadeyrn, on the other hand, was a strong military leader, and his upcoming marriage to a Greemallian princess would make Sadeemia one of the strongest nations in the region. A king could not ask for more.

Freemont’s gaze turned critical. “I hope your mother hasn’t seen you since your return.”

Cadeyrn’s jaw tensed. “She has not.”

Freemont nodded. “Good, good. You know how she feels about loose attire. Make sure you don a coat and restrain your hair before she receives you.”

“I will take my leave then,” the prince said, his voice tight.

Cadeyrn turned, his gaze on the hall. He wore a sword at his side, and his hand went instinctively to the hilt. His magic responded immediately to the steel beneath his grip, and he used it to calm himself. He didn’t wait for his father to dismiss him.

The prince was halfway down the hall when Freemont called to him. Cadeyrn paused, his gaze straight ahead.

One corner of the prince’s lips quirked. It wasn’t quite a grin, but it was close. Cadeyrn didn’t smile. He wasn’t sure he even remembered how.

Summerlost by Ally Condie
Just a Little Embrace by Tracie Puckett
Friendship Bread by Darien Gee
Absolute Beginners by Colin MacInnes
The Storyteller's Daughter by Maria Goodin
How It Rolls by Lila Felix
Beyond the Prophecy by Meredith Mansfield
Just One Kiss by Samantha James
How to Create the Next Facebook: Seeing Your Startup Through, From Idea to IPO by Tom Taulli
Torment (Dark Alpha #1) by Alisa Woods