Read Tempest in a Teapot (A Teapot Collector Mystery) Online

Tempest in a Teapot (A Teapot Collector Mystery) 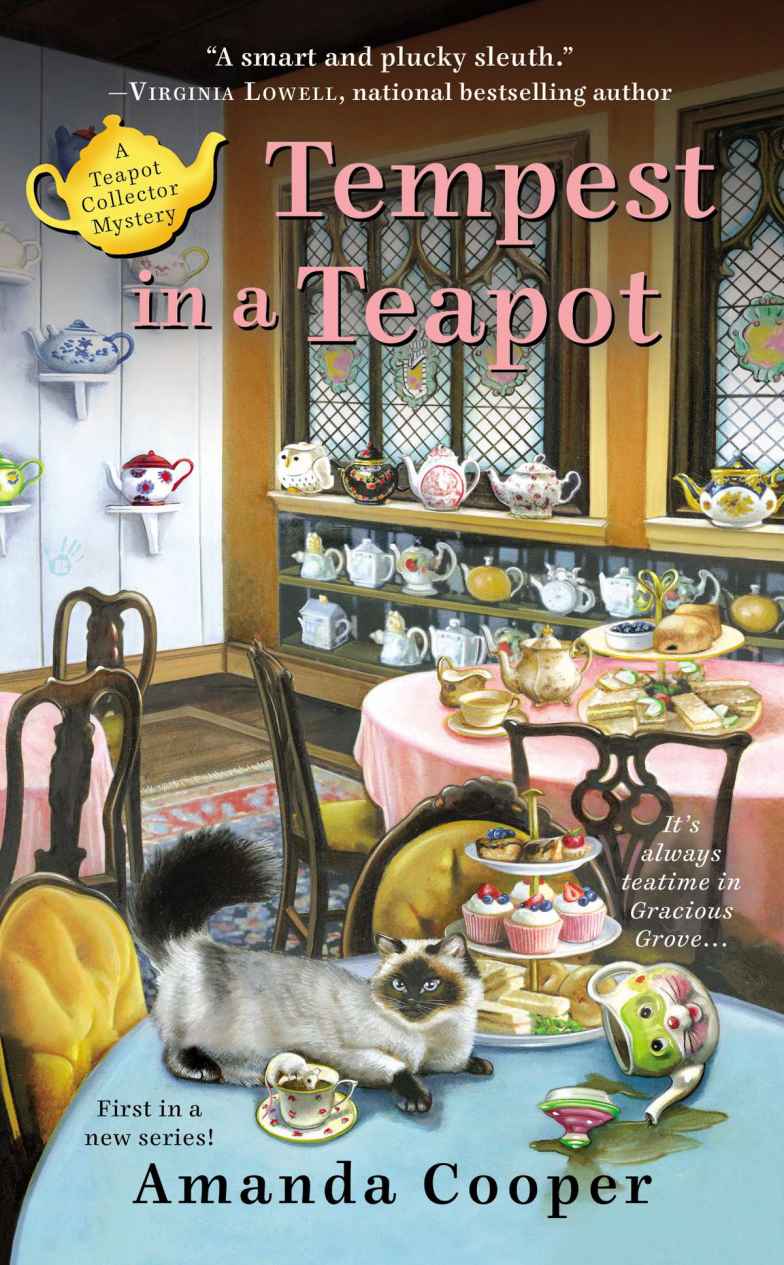 “Enough chatter,” Florence said, standing slowly, tugging at the frilled cuffs of her springy blouse. “Cut to the chase, Wally. What happened to poor Vivienne?”

Francis sat down, thudding into the nearest chair as if his legs wouldn’t hold him any longer. He buried his face in his hands and moaned.

Wally glanced at him, then continued. “The medical examiner says if he was to hazard a guess, he’d say that Mrs. Vivienne Whittaker had been poisoned, either purposely or accidentally, by something she ingested in the minutes before her demise.”

“You mean something she ate?” Thelma Mae loudly asked. “If that’s what you mean, just say it plain, Wally; don’t beat around the bush.”

He met her grim stare. “All right then, yes, it appears it was something she ate or drank in your tearoom that killed her.”

“You finally did it,” Francis said, lifting his face and glaring at the senior owner of Belle Époque. “You finally
killed
someone with your awful food!”

TEMPEST IN A TEAPOT

Penguin supports copyright. Copyright fuels creativity, encourages diverse voices,
promotes free speech, and creates a vibrant culture. Thank you for buying an authorized
edition of this book and for complying with copyright laws by not reproducing, scanning,
or distributing any part of it in any form without permission. You are supporting writers
and allowing Penguin to continue to publish books for every reader.

This is a work of fiction. Names, characters, places, and incidents either are the product
of the author’s imagination or are used fictitiously, and any resemblance to actual persons, living or dead, business establishments, events, or locales is entirely coincidental.

For Karen: mystery reader, tea drinker,
and most of all, wonderful friend!

How to Steep the Perfect Cup of Tea

“S
o, you’re a cook, right?” Sebastian DeRocque sat back in his chair in the dining room of the Eastern Star restaurant in Tribeca and crossed his legs. He pinched the knife-edge crease of his gray wool slacks and shot his white French cuff just enough to show one inch of white linen and a gold monogrammed cuff link.

“I’m a
chef
,” Sophie Taylor corrected, lifting a dumpling from the dim sum plate with chopsticks and popping it into her mouth. She savored the flavor, head cocked to one side. What
was
that spice the chef had used?

“I thought that men were chefs and women were cooks,” Sebastian said, signaling for another
tokkuri
, a ceramic carafe of sake.

Sophie stared at him for a moment, examining the supercilious curve of his lips. There was a chance he was teasing, but she didn’t think so. As she’d suffered his snobbery throughout the meal, he had exhibited not a single shred of a sense of humor. He had regaled her with the wonder that was Sebastian, but this was the first time he had asked anything about her. She didn’t really care if he was
trying
to be funny, anyway. Misogyny was rarely humorous. “No, a trained cook is a chef. Period. Gender, age, race and/or sexual orientation don’t enter into it. I have a culinary degree and one in restaurant management.”

“I don’t consider a refusal to discriminate being politically correct,” she said. “The way I was raised, it was called politeness and respect.” At least that was the lesson from her nana, in Gracious Grove, New York, though her mother didn’t feel the same.
She
would say if you are clearly superior, you deserve to discriminate.

“
Anyway
. . . is that why your restaurant failed so badly . . . your, er,
degree
in restaurant management?”

His effort to irritate her made her wonder if perhaps she hadn’t worshipped readily enough at the altar of his magnificence. As a surgeon of familial wealth and some fame, Sebastian was accustomed to adulation from women, she supposed. But she had known other doctors and many wealthy people, and most were not such snobs. No, his failings were
his
fault, not that of his situation in life. This blind date, set up by her mother, the ineffably lovely and cultured Rosalind Freemont Taylor, was not going to be repeated.

Sophie knew her mother
meant
well, which was the only reason she had agreed to the date. Her mom was convinced that her only daughter, having lost her livelihood—in other words, having lost In Fashion, the restaurant that was her reason for getting up every morning—should now give up, marry well, and retire to domestic bliss in Manhattan in winter, the Hamptons in summer.

That was not Sophie’s plan, but to be fair, did she even have a plan anymore? The restaurant had failed, yes, but it was one of a hundred or more that failed every year in New York. The economy’s nosedive had taken so many great eateries down with it that it was like some culinary Darwinian environment; only the strong survived. Sophie put her hand over her sake cup, so when Sebastian tried to pour, it spilled over her hand and onto the white linen tablecloth.

The long-suffering waiter was there in an instant. Sophie smiled up at him, and he ducked his head while he mopped up the spilled rice wine.

“I’m sorry,” she said, to the waiter, not Sebastian, as she wiped her hand with the linen napkin. “But I’ve had quite enough to drink. Could you ask the chef if that is white truffle in the dumpling? I’m curious.”

He ducked his head again—his English was not very good, and he was unlikely to risk speaking much after Sebastian had savaged his inability to pronounce his name—and took away the soiled linen with him.

“Chef, cook, manager . . . you sweat in a kitchen for a living. I wouldn’t have thought that
my
mother and
your
mother would have much in common, but apparently they belong to the same clubs.” He sipped his sake, made a face and said, “We should have gone to
my
choice of a restaurant, but I assumed that you, as familiar as you should be with the Manhattan restaurant scene, would be able to recommend some place decent.”

Sophie took in a deep breath, ready to let Sebastian have it, but instead a whiff of good black tea floated up her nostrils, the honey scent rolling across her in a wave. It took her away, to Auntie Rose’s Victorian Tea House in Gracious Grove, New York. Auntie Rose’s was her grandmother’s establishment and where she had learned, as a kid on vacation, to make cranberry scones and strawberry compote. The tearoom was the genesis of her hunger for and knowledge of food.

And teapots! The adorable teapots that lined shelves and shelves of Nana’s tearoom had been a source of endless pleasure as a child. If she was good . . . very,
very
good . . . she could take them down one by one and dust them. A teapot in the shape of a kitten on a cushion, abandoned by Nana because it was chipped, had been the start of her own sizable collection. Though she preferred art nouveau and art deco, now, over chintz and figural, it was something that bonded her and her maternal grandmother.

It was not even worth her while to chew out Sebastian for his presumption and arrogance. He wasn’t going to have an epiphany and realize he was a giant, braying ass. Her grandmother had always said, “
Sophie, you have to choose your battles in life. Don’t waste your time on folks who don’t matter
.”

Sebastian most definitely did
not
matter.

She took a deep breath and let it go, slowly. Sophie had made a decision regarding her future; she was going home. Not to her mother’s Manhattan apartment, not to the house in the Hamptons, nor the South Beach condo, but to Gracious Grove and Auntie Rose’s Victorian Tea House, her nana’s tearoom. She would find herself there, as she always did, among the teapots and cranberry scones.