Tempted by the Bear - Complete 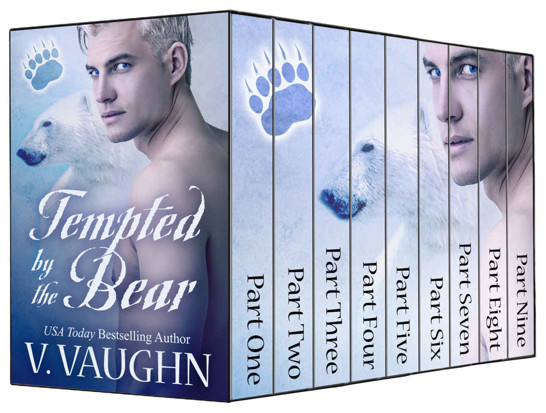 Tempted by the Bear - Part 1

Tempted by the Bear - Part 2

Tempted by the Bear - Part 3

Tempted by the Bear - Part 4

Tempted by the Bear - Part 5

Tempted by the Bear - Part 6

Tempted by the Bear - Part 7

Tempted by the Bear - Part 8

Tempted by the Bear - Part 9

C
over by Croco Designs

S
ign
up for V. Vaughn’s
newsletter
to hear about the next installment of
Called by the Bear
.

A
nnie Le Roux
- Tristan De Rozier’s so hot he might be the reason his glacier’s melting under his polar bear feet. But he turns mate attraction into a curse when his very presence makes my blood boil in anger. Figures he’s my true mate.

I
sabelle De Rozier
– When a polar bear clan lives in fear of extinction it’s easy to make a deal with the devil and move to Maine. Tristan and I didn’t count on discovering the woman that we’ll betray is also his true mate. This changes everything. After a lifetime of Tristan taking care of me, now it’s up to me to take care of business.

T
he dough lands
on the floured surface with enough force that a white cloud poofs up. I attack it with my hands to knead out excess air and give the bread texture.
That man!
That stunningly gorgeous beast of a man named Tristan De Rozier is going to be the death of me. He’s a polar bear shifter who also happens to be my true mate. I lift the dough up, slam it down again, and give it a punch for good measure.

“Wow, who got you so worked up?” Carly asks as she enters the kitchen.

I glance over at my sister-in-law. Carly and her friend Sierra came to us less than a year ago to help save our clan. While she’s my brother’s true mate and a powerful alpha, she’s also become my best friend.

“I don’t understand why you don’t give in to him.” The coffee pot clatters as she removes it to pour herself a cup. “He’s so hot, he might be the reason that glacier of his is melting.”

I snort and push a strand of hair out of my face. “Let me count the ways. One, he’s naked
all the time
. Do we really need to see that? Two, he taunts me as if I’m the one who’s lovesick, when I know it has to be both ways. And three--” I sigh. I want to be courted. I want wine, roses, and adoration. “He takes such pleasure in embarrassing me.” My throat tightens. “I hate it.”

Carly’s mug thumps on the counter, and she reaches out to stop my hands with hers. “You want romance and not little boy crush?”

I nod as I swallow down the urge to cry. “Is that so much to ask?”

“No. It’s not. But men can be stupid when it comes to stuff like this.”

“And if I give in, he’ll think he can always treat me this way. So until he gets a clue, expect a lot of baking to happen.”

The back door lets out a hollow echo as someone enters the mudroom that separates the kitchen from the outdoors. Within moments, the second door opens, which means the shifter who went out for a run is probably still nude. If that weren’t enough of a clue, my body’s slight hum of sexual tension confirms it. I don’t look up as I say, “Good morning, Tristan.”

But this man doesn’t like to be ignored, and large hands land on the counter on either side of me as he whispers against the back of my neck. “Annie, love. You really should join me some morning.”

He’s smart enough not to press any body parts against me, but my imagination has my blasted hormones reacting anyway. Joining Tristan as a bear would mean getting naked to shift with him, and I’m sure that’s exactly what he wants. But he’s never going to get it if he doesn’t get a clue. I decide to take action. “Sorry,
love
, I need a little more than a boy who swings his dick around. We can talk when you become a man.”

Tristan chuckles at me as my bold words bounce off his rock-hard body. He and his twin, Isabelle, have been houseguests for more than two weeks, and I’ve lost my patience. My face is flushed with shame, and my stomach churns, because I hate to lose my cool.

Carly’s voice is dangerously close to her alpha tone when she says, “I wouldn’t laugh if I were you. Annie doesn’t get mad, but when she does, you better find a way to suck up quickly or you’ll be eating garbage scraps.”

Tristan has enough brain cells to remain quiet as he leaves, and I let out a big breath when Carly’s hand lands on my shoulder. She turns me around for an embrace and says, “I’m sorry. You don’t deserve this. Those stupid guiding spirits are supposed to be smart and give us what we need. Who the hell thought you should get a big oaf of a polar bear?”

“Not only that, but did you know his obsession with sweet potatoes is making his fur orange?”

“No!” My body shakes with an uncontrollable giggle.

I squeeze Carly’s arm. “Thank you. I don’t know what I’d do without you.”

“You’ll never have to know.” She kisses my cheek and grabs her coffee cup to leave. “Can we have sweet potato fries for dinner tonight?”

“What a lovely idea.”

I place the bread dough in a pan and set it on the fridge to rise.

The cutting board thunks down in the sink to be rinsed. But the aroma that floats to my nose tells me my blueberry muffins are done, and I abandon the dishes to remove them from the oven. I smile to myself when I use Sierra’s trick of extending my claws and pulling out the muffin tin instead of using a potholder. It’s funny how the brand-new werebears have taught this lifelong one a thing or two about our world.

The low rumble of my mother’s car sounds in my super-sensitive ears, and I glance at the clock to discover she’s early for our weekly business breakfast. I know why. She’s anxious about the De Rozier clan assimilating into ours. While there are only twenty-five of them left, the two we’re acquainted with are rather large forces that could disrupt our peaceful clan.

As if my thoughts call her, Isabelle, Tristan’s twin, enters the kitchen. Her step is sluggish, and the cabinet clicks when I open it for ibuprofen before I greet her. I glance at her red-rimmed eyes and nearly-white hair piled on top of her head in a messy bun that probably caused pain to create. I ask, “Anyone I need to usher out before people get here?”

She shakes her head and winces at the motion. She holds out her hand, and I place two round tablets in her palm, and her voice is raspy when she says, “You really are an angel.”

“Do you need a protein shake?”

“Yes, please. I promise I’ll help you cook once it starts to work.” Isabelle falls into a chair, and it creaks under her weight. She’s the largest woman I’ve ever met. But that doesn’t detract from her beauty. With her pale coloring, Nordic features, and sex appeal that rivals Sierra’s, men want to climb her like she’s Mount Everest. I expect if they get the chance, they’re breathless when they hit the peak.

“No need. Carly should be down soon to help.” Since my mother will want to talk out her issues about the De Roziers, I need Isabelle to leave us alone.

The whine of my blender is loud as my mother enters the kitchen. When it stops, I turn to greet her. “Good morning, Mom.” Thick liquid pours into a glass, and I hand it to Isabelle.

Isabelle stands. “I’m going to go to my room until it’s time for the meeting.”

I watch as she shuffles out. Mom says, “Someone’s enjoying civilization. I hear she’s sampling the local delicacies too.”

I frown, because I think Isabelle’s party-girl attitude is masking something. “Don’t you wonder why?”

“I do. While I’d like to welcome the De Rozier clan with open arms, I think it’s wise to remember Polar Bear are known as the fiercest of our kind for a reason.”

I try to imagine Tristan as a vicious bear. While the cocky attitude fits, his playful nature doesn’t. But if he’s the alpha and leading his clan to safety, he can’t be all fun and games.
Huh.
I guess Isabelle isn’t the only one hiding something.

Beyond the Call by Lee Trimble
As Gouda as Dead by Avery Aames
Silicon Valley Sweetheart by St. Claire, Alyssa
The Savage Gentleman by Philip Wylie
After Midnight by Chelsea James
The Swiss Family RobinZOM (Book 4) by Perrin Briar
When to Rob a Bank: ...And 131 More Warped Suggestions and Well-Intended Rants by Steven D. Levitt, Stephen J. Dubner
Abducted to Love: The Intergalactic Prince Series (SciFi Alien Romance) by Jill L. Sterling
Wanted: A Leopold Blake Thriller by Nick Stephenson
The Libertine by Walker, Saskia