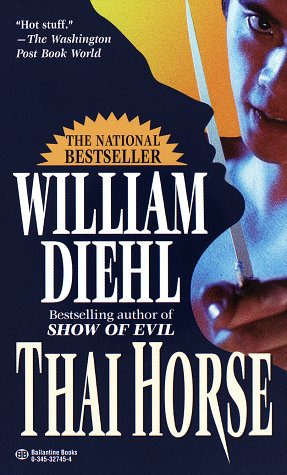 When his best friend vanished, Christian Hatcher, the Shadow Warrior, had no choice. He had to follow the heroin pipeline . . . from Hong Kong to Bangkok, to the deepest darkness of Vietnam. The sensational new national bestseller by the author of Chameleon and Sharkey's Machine.

‘William Dieh
l
has turned all the tools
o
f the adventure-writing trade loose in his newest novel.
Hot
stuff, this
Thai Horse.
It’s got a hero who’s a mixture of Ollie North, James Bond, Lee Marvin, Clint Eastwood and Charles Bronson, with a plot that takes us from Central America to Southeast Asia, Hong Kong, New York and, briefly, to an island off Georgia, and combines elements of
The Maltese Falcon, The Dirty Dozen,
Sax Rohmer’s Fu Man Chu books and
The Wizard of Oz. . .
I was barely able to put this number down’

‘Mr Dieh
l
knows how to tell a story, arid his novel moves along at a good pace’

‘A superior adventure novel from the author of
Sharky’s Machine. . .
A taut plot, interesting sub-plots and good characterization are the hallmarks of t
h
e story. It’s exciting, plausibly horrific and light
on
the gung-ho excesses which usually stalk the genre’

‘Everything a summer beach read sho
u
ld be’

William Dieh
l
lives on St. Simon’s Island, Georgia, with his wife, four dogs, two cats, a goat, twenty birds, and a lot of tropical fish.
H
e is the author of three previous international best sellers, Sharky’s Machine, Chameleon and Hooligans, and is currently at work on his fifth novel.

1. This book is sold subject to the condition that it shall not, by way of trade
or otherwise,
be le
n
t, re-sold, hired out or otherwise circulated without the publisher’s prior consent in any form of binding or cover other than that in which it is published
and without a similar
condition
including this condition being imposed on the subsequent purchaser.

2. This book is sold subject to the Standard Conditions of Sale of Net Books and may not be re-s
o
ld in the U.K. below the net price fixed by the publishers for the book.

To four treasured
friends
: my agent, Owen Laster, my editor, Peter Gerhers, my adviser, Buddy
H
arris, and, as always, to the love of
my
life,
Virginia

S
ome men go skimming over the years of existence to sink gently into a placid grave, ignorant of life to the last, without ever having been made to see all it
may
contain of perfidy, of violence, and of terror.

He hardly felt the hit, but he heard it. The muffled roar shook the stick slightly, and he looke
d
out to see the end of his right wing shatter and flake away. A moment later the familiar and frightening sound of
.50
caliber shells rattled the fuselage behind him as the
bullets
ripped the twin- engine
OV-1O.
Suddenly the plane
b
egan to yaw, then it made a wrenching slip in the opposite direction. The plane dipped slightly toward the good
w
ing and dropped a hundred feet. Cody was fighting the aircraft, trying to get it stable. He pressed the radio button: ‘Mayday
’.
.

The voice was remarkably calm,
al
most resigned. The only hint of trouble was in the timb
r
e of his voice. It was shaking from the violent action of the plane, like a stereo with too much bass.

They were too low to bail out. Cod y always played it like that, treetop-level stuff. ‘Get down .where you can see the whites of their eyes,’ he would tell his men. From under the umbrella of green foliage, deadly ground fire chewed at the twin-engine assault plane. Fifty-calibers rattled the fuselage.

‘Brace yourself,’ he told his gunner. There was no response. Cody turned in the
cockpit
and looked back. Rossiter was slumped in the seat, his canopy riddled, his face shot away. But Cody lad no time to feel sorry for the youngster, he wa
s
losing the plane. The jungle catapulted toward him. Two hundred yards in front of him was the river an d on the other side of the river was freedom. He
k
new he’d never make

Before HQ could answer, the pilot was back on.

‘Chilidog one, can you make it across the river?’

The radio operator switched bands and called Rescue. ‘Rescue, this is Corkscrew. I have a Black Pony going in half mile north of checkpoint Charlie, a couple of hundred yards into Indian country
. . .
Do you read?’

‘Chilidog one, we have a Huey in the area. Can you stay aloft to the river?’

‘Shit, we’re losing him,’ the radio operator muttered. He turned to his assistant. ‘Get the Skipper over here fast, Wicker.’

‘On it,’ the assistant, a ruddy-faced seaman first, snapped back and snatched up the phone.

The plane suddenly jerked again
-
The stick was useless. Cody was trying to get it under control with the rudder pedals, but that, too, was futile. The ship went up on its good wing and then slowly began to roll. The green jungle rushed toward him as he rolled upside down. Cody slammed the stick forward in a last attempt to get control and the plane’s nose rose sharply. Its tail raked the treetops and disintegrated, and the black craft was snapped down into the green tapestry below. Cody shoved the stick forward, away from his chest, and braced himself against the instrument panel, his forearms shielding his face. He heard the plane crumpling around him, the metal screaming as the trees tore it apart
.
Then it all stopped
—
the noise, the forward thrust
—
everything seemed suspended in time.

Cody, hanging upside down, looked over his head and stared straight down at the ground, about twenty feet below hint
.
The plane was a twisted wreck around him. He looked back at Rossiter, his gu
n
ner. The kid’s arms hung down toward the ground.

The canopy was half off, dangling from its tracks. Cody slammed the flat of his hand into it and it toppled away into the trees. He smelled smoke.

He started talking to himself, rattling off the drill. ‘Got to get out,’ he said and, loosening his safety belt, tried to hang out of the plane and drop to the tree limbs. The smell of smoke grew stronger, and
suddenly
he was free of the plane, arcing through the air. He reached out toward a branch, felt it slap his palm and then slip away. It spun him around so his feet were now below him. Just like a bail-out, he thought as he hurtled toward the ground. Knees together and bent, roll when I hit.

But he hit wrong, and as he landed he heard his kneecap pop, felt the pain burn deep in the leg, coursing down to his ankle. He trapped the scream of pain between his teeth. Sweat boiled out of his skin.

He looked up. The river was twenty yards away, shimmering in the early morning sun. He got up and started hobbling frantically toward it He knew there were bandits all around, but maybe he’d get lucky. Then overhead and behind him he heard a sizzling sound and a moment later the
dull
thumpf
as the gas tanks went. Heat from the explosion wafted down over him, but he kept hopping toward the river, dragging his ruined leg behind him. He didn’t look back. Then he heard the familiar
chump, chump, chump
of the chopper, off to his left, coming upriver.

‘Corkscrew, this is Rescue one. We have the Black Pony in sight
. . .

The Huey was suspended twenty feet above the river. In the belly, Harley Simmons, a young gunner, squinted and peered into the thick foliage, looking for signs of life. The pilot’s voice crackled through the earphones.

‘How about it, Simmons, anything?’

The explosion cut him off. It was almost like slow motion. First the shock wave of th
e
burst rippling through the trees, then the Black Pony disintegrating, then the bright orange fireball boiling up into the sky. Seconds later the
ping of bullets sang off the fu
selage a few feet from Simmons’s head.

‘We got bandits shooting at us!’ Simmons screamed into his mike.

‘How about our man?’ the pilot relied back.

Then Simmons saw him; he was hobbling from under the awning of fire, heading toward the riverbank. He was almost there-. twenty, thirty feet maybe. B
u
t before Simmons could say anything, another round of bulle
t
s ripped into the edge of the open hatch, tearing it up. Bits and pieces rattled off Simmons’s helmet. He heard the whine of 9 mm. shells wailing inches from his ear, and fear .charged deeply into him like a bolt of lightning. The plane in the forest exploded again and fire raged through the treetops.

He can’t make it, Simmons said to himself as more gunfire tore at the Huey.

‘I don’t see nothing, Captain,’ he lied. ‘We got bandits chewing us up back here.’

The pilot rolled the belly of the chopper toward the forest and spun around, heading back downriver.

Simmons dropped weakly to his knees. He was shaking all over. Oh God, he thought, what have I done
.

But he was too frightened to sa
y
it aloud. He heard the pilot’s voice on the intercom: ‘Corkscrew, this is Rescue one
. . .
We lost him
. . .

Cody almost reached the bank when the chatter of an automatic weapon off to his right startled him. He dropped to the ground and crawled to the edge of the water.