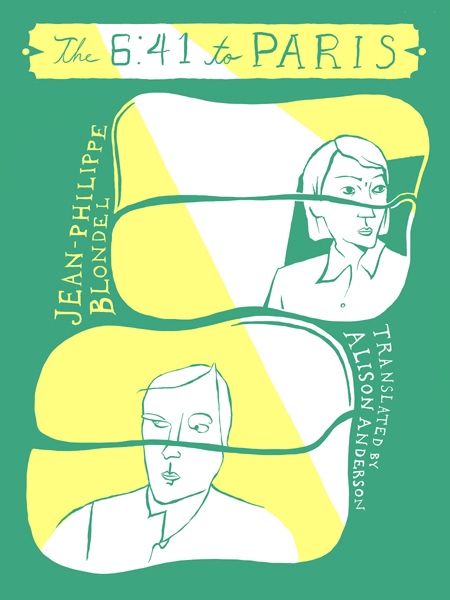 All rights reserved. Except for brief passages quoted in a newspaper, magazine, radio, television, or website review, no part of this book may be reproduced in any form or by any means, electronic or mechanical, including photocopying and recording, or by any information storage and retrieval system, without permission in writing from the Publisher.

I could have taken the 7:50, or even the 8:53. It’s Monday. Mondays are dead quiet at work. It’s just that I couldn’t take it anymore. What was I thinking, staying Sunday night. I don’t know what came over me. Two days are more than enough.

I didn’t sleep well at all last night, obviously. I was so annoyed with myself. Another wasted weekend. And at the same time, it was no surprise, it’s always
like that. Valentine could have told me it would be. So could Luc. And I understand their perspective, but it pisses me off. That they didn’t come. That they didn’t do their bit. That they weren’t there supporting me so I could get through those two days. That they don’t care as much about my parents as I do. Which is normal. They are
my
parents. My very own. My only parents, and I’m their only
daughter.

Every time, I swear it can’t go on like this. And then I start feeling guilty. Insidiously. I hear their voices on the phone. Never a reproach. Never a complaint. Just silence, when I say that I have a lot of work at the moment. I have to get in touch with my suppliers. I have to satisfy my clients. I can just imagine them on the other end of the line. My mother standing ramrod straight
behind my father. Brittle. The grimace on her face. The scathing remark on the tip of her tongue. I wonder if there is anyone anywhere who knows how to look after elderly parents. Elderly but not yet bedridden.
Just old and weak. Old and vulnerable. And bitter.

No, actually, I don’t wonder. There must be somebody, yes. Luc, for example. Except actually he doesn’t care about them at all. He severed
all connections with his family more than twenty years ago, and apart from a very occasional visit or phone call, he’s not in touch. I think that’s what I admired most about him when we met. How independent he could be. That salutary selfishness. I admired it even more than his presence. Or his style. The style he has kept in spite of the passage of time. He’s pushing fifty, but he’s still slim,
trim, almost rugged. The kind of man that women over forty dream about. I’m not jealous. I never have been. I’m not submissive enough. Our mutual independence is both a challenge and a source of respect.

Naturally my parents complained when Luc didn’t show up. It’s not that he’s overly friendly with them, but they like it better when we come
as a family.
With Luc and Valentine. That way they
can tell the entire neighborhood—the shopkeepers in particular—“Last weekend, the whole family was here.” They like saying that,
the whole family.

This time, the other two members of
the whole family
didn’t give in.

I tried to explain. Luc had a lot of work, his company is in the middle of a restructuring. And as for Valentine, you know … As a rule, just saying “you know …” and following it
with a sigh should be enough, should suggest the fact that Valentine is almost seventeen, she lives just outside Paris, she’s in love, and she hates coming to this
town out in the boonies where she doesn’t know a soul and where her grandpa is constantly sending her out into the garden to play as if she were still seven years old.

But that’s not enough for my parents. I have to come up with a
pretty lie, neatly packaged, festooned with magnificent lemon yellow ribbons—and served up with a radiant smile. I’m used to it. I learned to hide the truth from them very early on. So I invented some fake exams for Valentine on Monday morning, that way all day Sunday she’d have to be studying for them. When I told her how I planned to lie to her grandparents, she burst out laughing, hugged me, and
asked why I didn’t just tell them that whenever she went there she got so bored she could die and that they were a real pain in the butt. I didn’t say anything. The only thing I could think of was “I couldn’t speak like that to my parents,” but I didn’t come out with it because I know for a fact that Luc and Valentine would be perfectly capable of saying something like that.

I wonder if Valentine
will talk to us like that later on. When it’s our turn to wait for her visit in our little house in the suburbs. No, no suburbs. I’m not going to get old in the Paris suburbs. I don’t come from there. There’s nothing to keep me there. I’ve started thinking about where I—I mean
we
, if all goes well—might end our days. I like the thought of Mexico, or Morocco, but I know I would miss books and movies
and my own language. And besides, I know those countries. I’ve already been there. I’m glad I was able to visit them, but
I can’t see myself living there. No. I need a quiet place. Flat, open country—but with hills on the horizon, all the same. Or else the sea. The ocean, rather. Salty, wild, sticking to your skin. But not Paris. No. Or here, either. Troyes. The Champagne region. I’ve had enough
of it. On the station platform. 6:35. I can’t begin to think how many times I’ve waited for a train under this glass roof.

The fact I got up so early. And stayed an extra night, above all. I had the choice. I could have gone home last night—but I don’t know, the thought of forty-five minutes on the Métro and RER and then getting home from the Gare de l’Est,
and then all over again in the other direction on Monday morning really depressed me. And my mother’s face, transformed into this Mater Dolorosa, stubbornly silent of course, at the thought of my departure on Sunday afternoon. I knew that Valentine was sleeping over at Éléonore’s and that Luc would be spending the evening on his computer. So I clapped my hands, like a little girl, and blurted, “I’ll
just leave on Monday morning!” I called Luc, who grumbled. And sent a text to Valentine—in any case, there’s no other way to get in touch with her. Her reply: “OK. Hugs.” There comes an age when you find yourself trapped between indifferent children and recalcitrant parents. That’s all there is to it. I’m forty-seven years old. I’m right in the middle of it.

In the end, my parents were more surprised
than anyone. Unpleasantly surprised. Especially my mother.
The Mater Dolorosa became a Mater Anxiosa. This would upset her routine. This would give her multiple causes for concern. She wouldn’t be able to put the sheets I had used into the washing machine. It would throw everything off. And what on earth will we have for supper, we didn’t plan, did we, Sunday evening, you know, usually it’s just
soup, the police show on Channel 2, and off to bed! And besides, what’s behind it? Is there something wrong between you and Luc? That’s why he didn’t come, isn’t it! Oh, you know you can come out and tell us, but you could be a little nicer to him, after all. It’s as if you always decide everything.

So I had to fight back. I said, “Aren’t you pleased I’m spending some time with you?” They beat
a hasty retreat. They apologized. They said, Of course, it’s just that … No point in taking it any further. I know.
The whole family.
And to think that, in my everyday life, I am respected. Almost feared. I plan. I decide. I hire.

I don’t know if I’ll be sad when they pass away.

Apparently you can boast about your indifference, but when that time comes, the emotion just comes straight at you
and mows you down. Whatever. I find it hard to believe. In short, a completely wasted weekend. All I did was go around in circles in my parents’ house. The only time I got out was to go and change my train ticket yesterday—oh, and I also went with my mother to the boulangerie-pâtisserie which isn’t a boulangerie and even less of a patisserie, but just a place where they sell bread. She wanted to
buy some custard. For dessert on
Sunday evening. Since nothing had been planned.

It goes without saying that I won’t share any of this with Luc. It would only prove that he was right and he would go around with his smug little smile on his face. Nor will I say a word to Valentine—she doesn’t care, anyway. Nor do my colleagues. And the few friends we still have—it’s crazy how once people turn
forty friendships seem to disintegrate. They get transferred, they’re busy with their kids, you no longer share the same opinions—everything alienates you from people you thought would be close to you all your life. All that’s left are laconic email messages. Phone calls punctuated with long silences. Sporadic meetings.

I have to remind myself that when I haven’t slept well I get all
bent out of shape. It’s 6:41 in the morning, after all. And I’m in a foul mood.

I’m astonished how many people are here. And how many trains there are this early. It’s as if half the town were going to work in Paris every day.

Which may well be the case.

I would have gone crazy if it had been late.