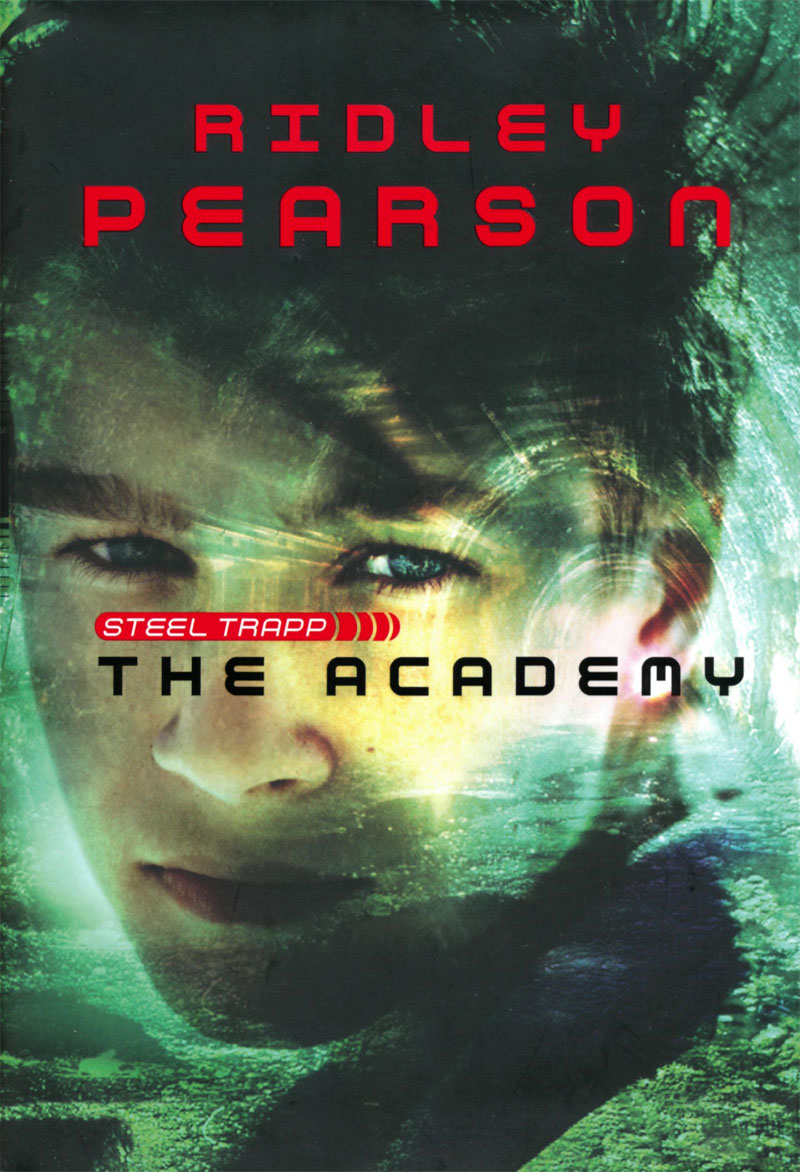 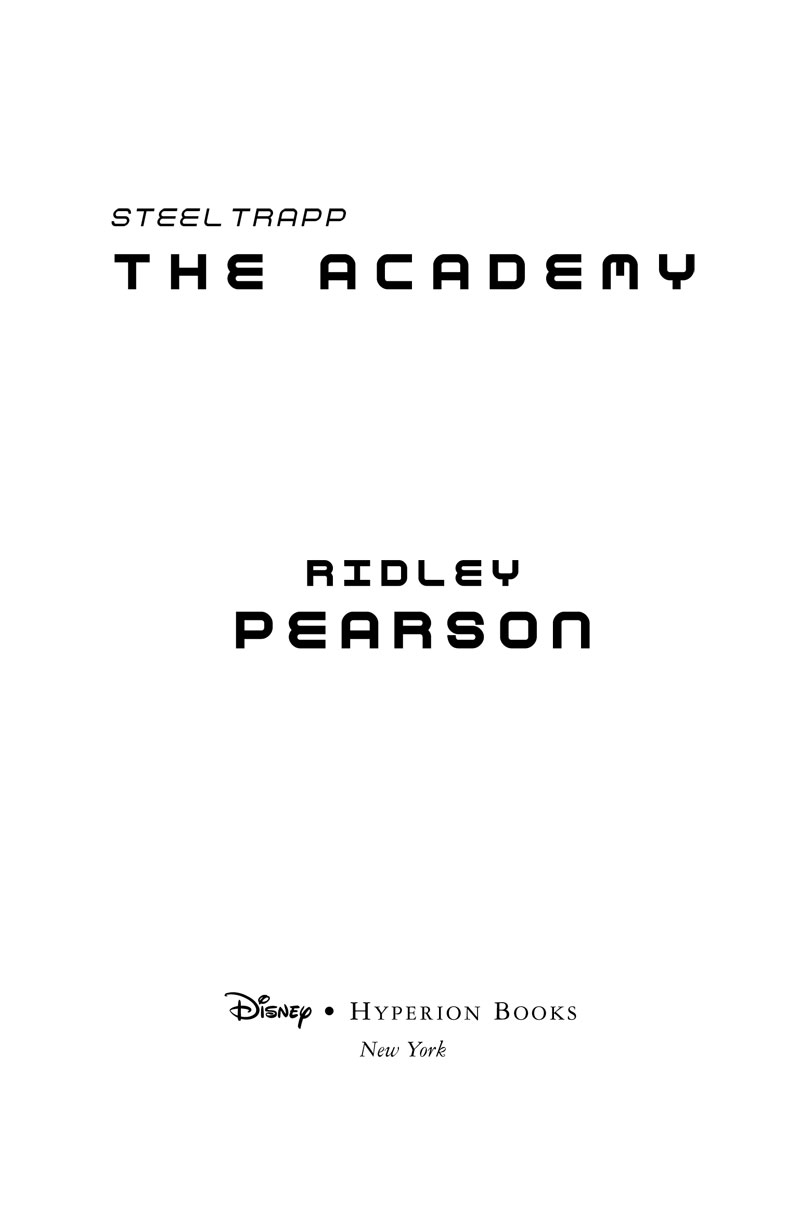 Published by Disney • Hyperion Books, an imprint of Disney Book Group.
No part of this book may be reproduced or transmitted in any form
or by any means, electronic or mechanical, including photocopying,
recording, or by any information storage and retrieval system,
without written permission from the publisher.
For information address Disney • Hyperion Books,
114 Fifth Avenue, New York, New York 10011-5690.

For Storey and Paige

Thanks to the faculty and alumni of Pomfret School, the model for Wynncliff. Peter Wormser and I traveled around in those tunnels…not that anyone ever knew (I hope). A portion of the proceeds from the book goes to Pomfret. Thanks also to Bobby K. for our adventures in Boston as young seventeen-year-olds. And to Marcelle, Wendy, Jessie, Jennifer, Laurel, David, Tanner, and Nancy for their help through the various drafts. (Any mistakes are all theirs!)

Cave of the Dark Wind

Escape from the Carnivale

Peter and the Sword of Mercy

Peter and the Secret of Rundoon

Peter and the Shadow Thieves

Peter and the Starcatchers

The brightly lit lower-level corridor stretched out ahead of him, impossibly long, like some kind of throat, offering no place for Steel to hide.

Steven “Steel” Trapp had walked the same corridor only once, two months earlier, while being given a guided tour by an upperclassman, a Fifth Form student—a high school junior by the name of Walker Glasscock. But he could recall with perfect clarity each door, every name on the plastic plates to the left of the doors—
WRESTLING, A/V, DANCE, TRACK COACH, FOOTBALL COACH, MECHANICALS
, etc.—not only the layout but the exact number of chairs in any of the rooms he’d seen on the tour. For that matter, he could remember the items on a Whiskey River dinner menu he’d chosen from two years earlier, the prices and the phone number of the restaurant, and the name—Chloe—of the waitress who’d served him that night along with his mother and father. He suspected his uncanny memory skills were responsible for his winning admission to Wynncliff Academy.

“Remember,” his father had said when dropping him off, “if you don’t like it, you can come home. But I want you to—”

“—give it until Thanksgiving before deciding,” Steel had finished for him. “I know, Dad. You’ve told me that seven times.”

“That was the seventh, yes.”

His father didn’t challenge the accuracy of his son’s memory. Neither did his teachers. In fact, it had been a teacher who’d given him the nickname “Steel” because young Steven “had a mind like a steel trap.” He never forgot
anything
. He was something of a freak, but he’d come to live with it. He learned not to show off or misuse what his mother called “his gift.” Showing off cost friendships, and lost friendships made him lonely. He’d learned the hard way.

Here at Wynncliff he would have to be careful. Other kids typically resented his ability. Teachers were intimidated by him. It wasn’t going to be easy.

But presently he wasn’t thinking about any of that. Because presently some big kid was chasing him, and he desperately needed a place to hide.

He didn’t have to think to recall things—they were just there, always available, in the front of his mind, correcting his decisions the way eyeglasses corrected a person’s vision. His recall was as fast as Google. That was why he took the fourth door on the right without reading
CUSTODIAN
on the plate. He quietly pulled the door shut and wedged himself behind some broom and mop handles. The closet was the size of a phone booth, a giant sink occupying nearly half of it.

He wasn’t exactly sure what he’d seen, but now he didn’t want to find out. Certainly not on the first day of school. He would later discover that a sign had blown over due to the strong and endless winds that streamed across the hilltop school. Northeastern Connecticut was all rolling hills and forests, broken by a few orchards and even fewer farms. It was the strangest location for a school—so far from everything. He’d already heard a rumor that the school’s sports teams never played home games—only away games, as if its location were being kept secret.

A man named William Bromfield Wynncliff had decided to build a compound of white-trimmed brick buildings in a cleared field on top of a Connecticut mountaintop, 117 years earlier. The location seemed more suitable for a wind farm than a school. And it had been the wind that had blown over a sign reading:
GYM CLOSED. DO NOT ENTER. WILL REOPEN AT
12:00
P.M.

So Steel hadn’t seen the sign. His objective had been to put his gym clothes into his assigned locker. It hadn’t occurred to him that by arriving to the gym so early he might end up interrupting something. It hadn’t occurred to him that by keying in a code on the building’s security pad to gain entrance, he might be violating a school rule. The kid who had toured him around the campus on his previous visit had used the code—and Steel remembered it, just as he remembered everything. Having a security lock on the gym—and some of the other buildings—had been a curiosity to Steel at the time, but he hadn’t said anything. Now, instead of going back to the administration building and asking questions, he simply let himself in, figuring this was how it was done. He’d entered the lobby and, upon hearing voices, had opened the gym doors.

What he’d seen had momentarily paralyzed him: four boys, posed down on one knee, facing four mannequins across the gym. There was a coach standing slightly behind them. All four boys were holding long stainless-steel tubes to their mouths. On the coach’s cue, they fired darts at the mannequin targets.

“No!” the coach said loudly. “It’s not enough to simply hit the target. These aren’t spitballs! The darts must be fired with enough force to result in the injection! Without that, the effort is useless! The idea is to render your opponent unconscious.”

Blowguns?
Steel wondered.
How cool is that?

He gasped, drawing attention to himself, but wasn’t embarrassed to be seen: he would sign up for Blowguns 101 in a nanosecond. He had no way of knowing that because of the lighting he was only seen in silhouette; he assumed they got a good look at him. But he hoped not, as the coach shouted, “Who’s there? Stay where you are!” For a moment Steel didn’t process what was going on, didn’t realize he was in a closed practice. Then the tension in the coach’s voice registered.

When the coach spoke to the boys, saying, “Well? Go get him!” Steel stood frozen for a second as one of the boys—a
big
guy—stood and came toward him at a full sprint. At that moment he regretted using the security code to let himself in. He regretted allowing himself to be seen. More than anything, he wanted to do the right thing, given the situation.

He took off running.

The idea of an upperclassman pursuing him, on the first day of school no less, sent Steel leaping onto and sliding down the staircase’s metal hand railing. He rode the next handrail to the facility’s lower level. The kid hadn’t tried the rail; he stayed to the stairs, buying Steel a few precious seconds.

From there he’d faced an instant decision and had gone left, because his photographic memory had delivered perfect recall of the layout from his prior tour.

He kept perfectly still inside the sour-smelling closet, his chest burning, his ears ringing, his body rigid in a giant knot.

The sound of footfalls—had he actually seen them firing
blow darts
? he wondered—sped past the door, then returned in his direction. He heard a nearby door open and close. Another. A third. Moving steadily closer. He pushed his back into the corner, the dozen broom and mop handles covering him like a lean-to shelter. He held his breath.

A hand slapped the wall for a light switch, but raked the broom handles into a noisy complaint, missing the switch. Steel did not breathe. The door shut, and the footfalls continued one door to the next.

At last, there were several long minutes of silence.

The pursuit had stopped.

He dared a peek out. An exit sign beckoned at the end of the long hall.

He ran for it and sneaked outside, taking a deep sigh, his lungs filling with the clean, crisp, hilltop air.

He was glad to be free, but more pressing was his recollection of the four boys firing darts at dummies, for he could—and did—replay it in his mind exactly as he’d seen it.

And for once, for perhaps the first time in his life, he did not trust his own memory.

B000FBJF64 EBOK by Marai, Sandor
City of Light (The Traveler's Gate Trilogy) by Wight, Will
Death in Gascony by Sarah d'Almeida
Ghost Talker by Robin D. Owens
Conquerors' Pride by Timothy Zahn
Hunters of the Dusk by Darren Shan
The Girl from Everywhere by Heidi Heilig
Blameless by B. A. Shapiro
Behind The Mask by Rey Mysterio Jr.
The Night Cafe by Taylor Smith